×
You are here: Home / Places to Stay in England / London / Benihana – London, Chelsea

Looking for a fun evening filled with humour and knife-wielding antics? Benihana is the perfect place for celebratory dinners. 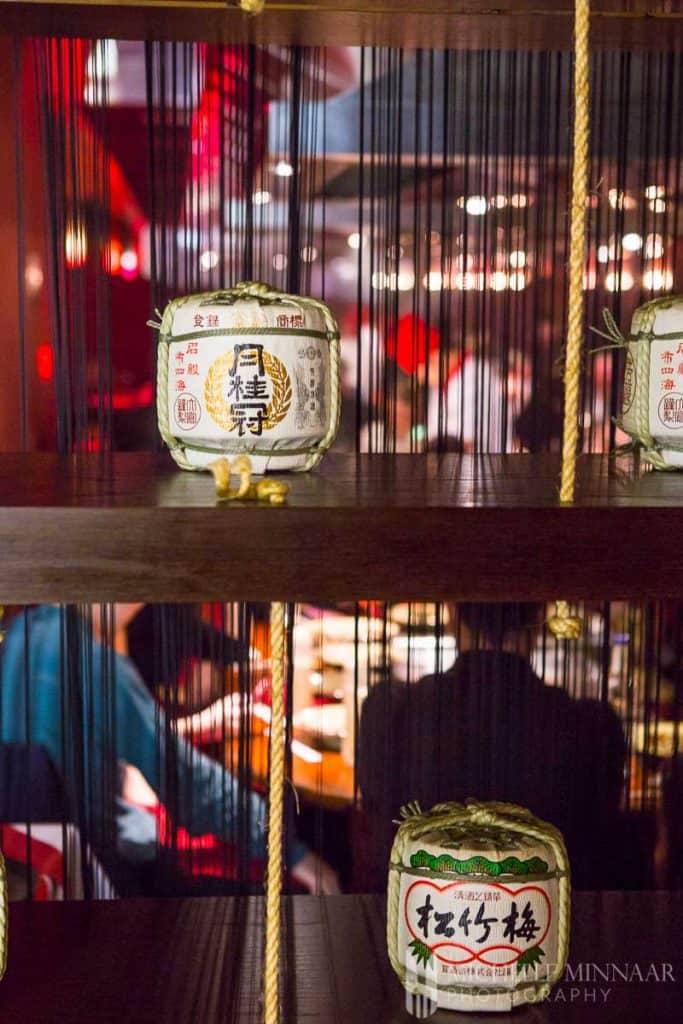 There are three Benihana branches in London and we visited the Chelsea establishment a few weeks ago. After handing in our coats we were led down into the belly of the building which expanded into a large waiting area. A large screen displayed mostly birthday messages to special guests and even a welcoming one to me. Wahey! 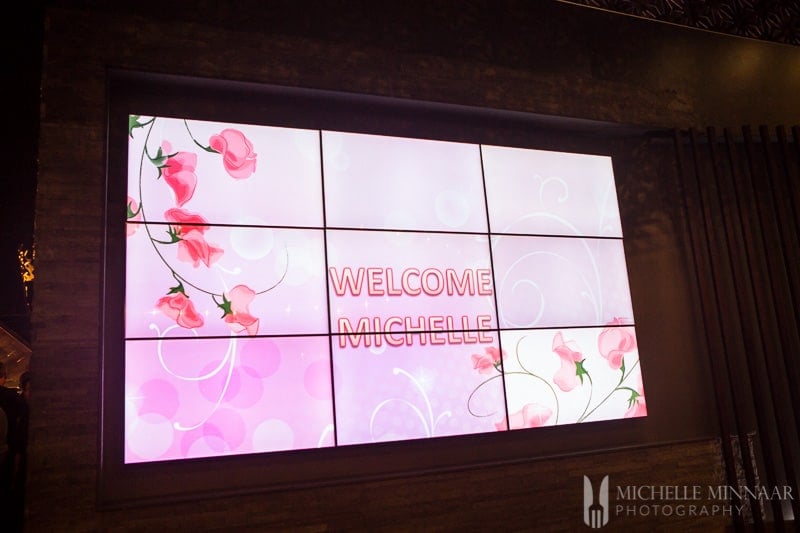 We waited for a while, drinkless, not quite sure why we weren’t led straight to our table in the first place. Finally, when we were seated it all became clear. 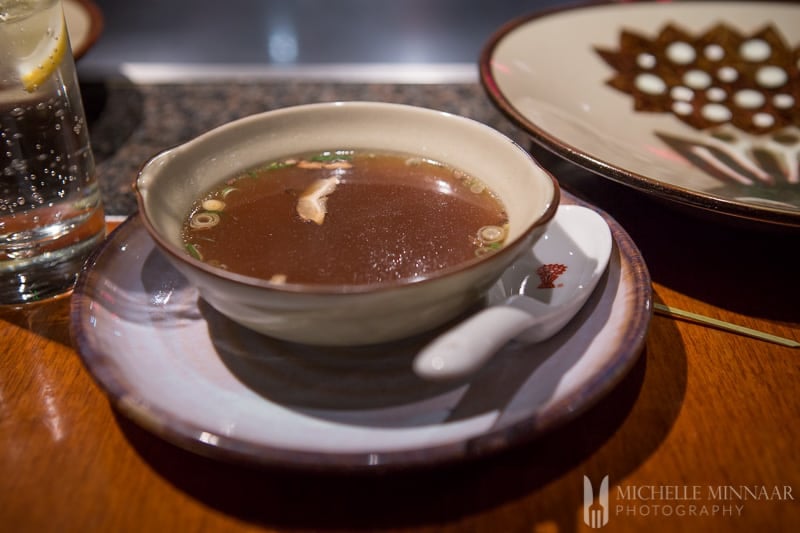 Seating for customers are carefully mapped out to make the most of the two dining rooms. Smaller numbered groups end up sharing a table European-style. Our neighbours, a married pair taking their granddaughter for a treat, were no trouble at all and we all enjoyed the dramatic displays to follow. 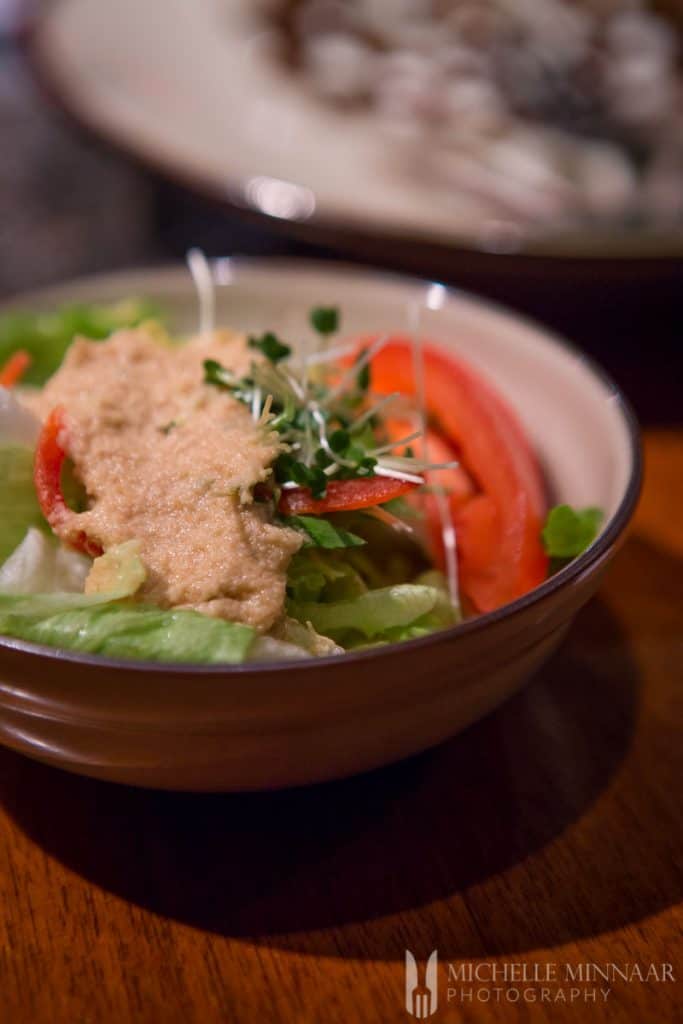 Truth be told, we were starving and getting impatient. The cocktails were rather good and once they arrived everything happened in a flurry, starting with the Benihana Onion Soup and Salad with Ginger Dressing. 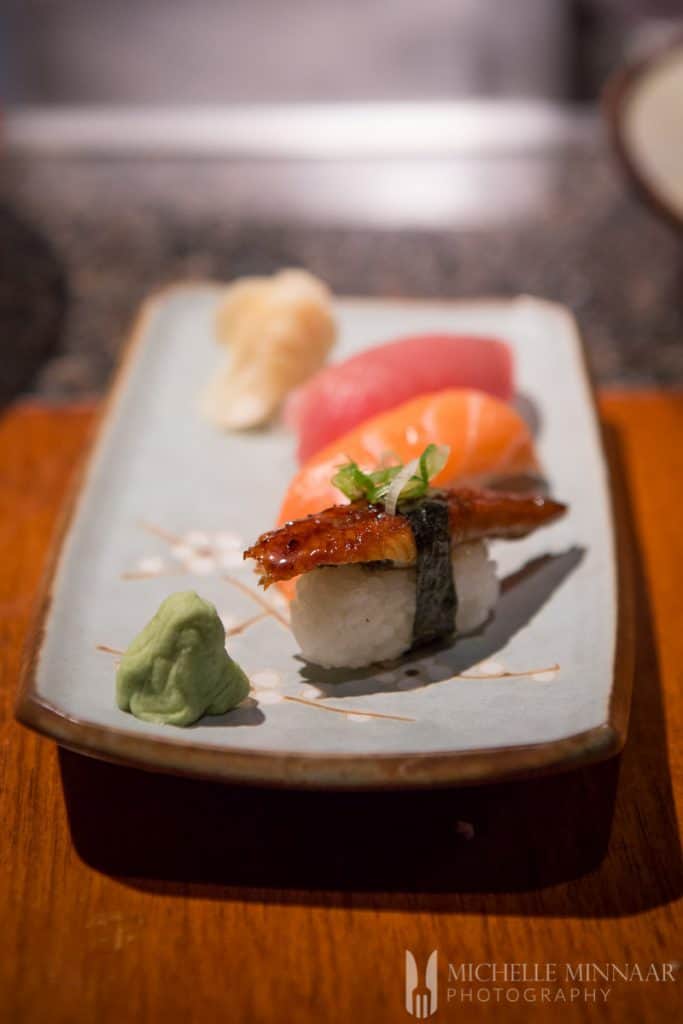 The first two courses didn’t warrant a second visit but the arrival of the sushi course changed matters. The eel nigiri was memorable. 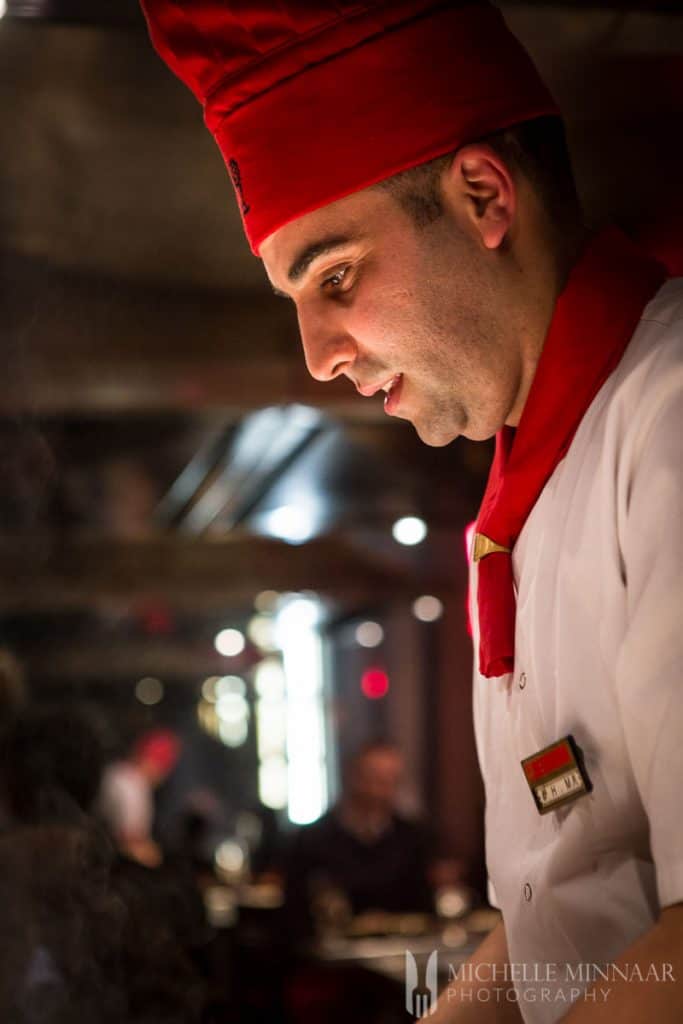 Enter our chef who turned out to be not quite Japanese but worked the teppanyaki like a pro. All the chefs follow the same regime but put their own spin on things where possible. A flair for showmanship is a must in the hiring process because these guys are personable jokers, readily interacting with the customers and delighting children and adults alike. 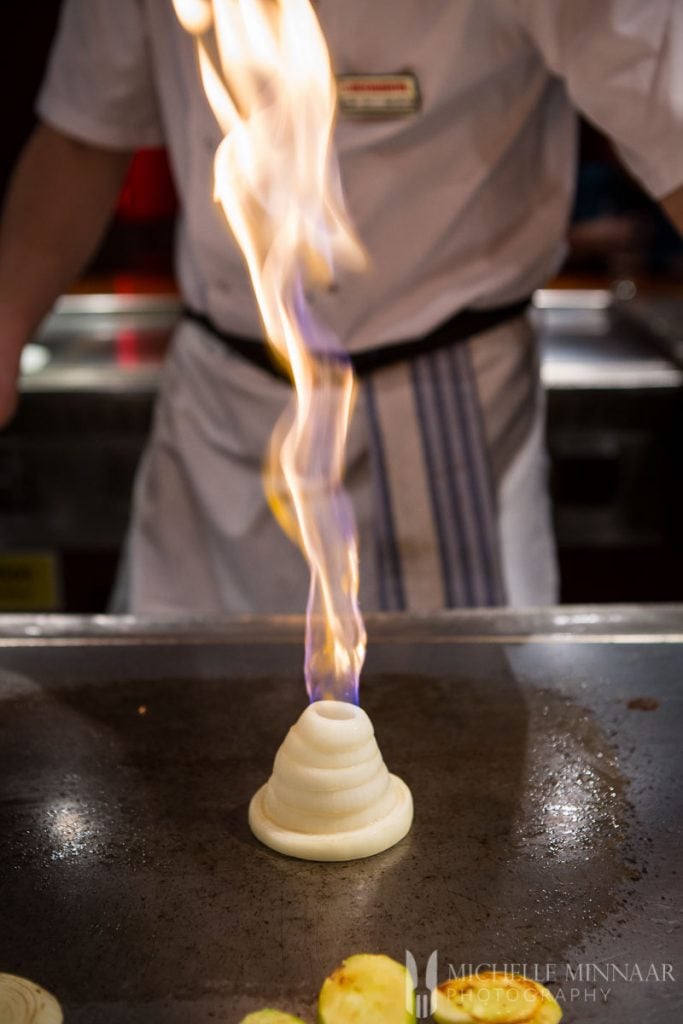 Do you get the idea? 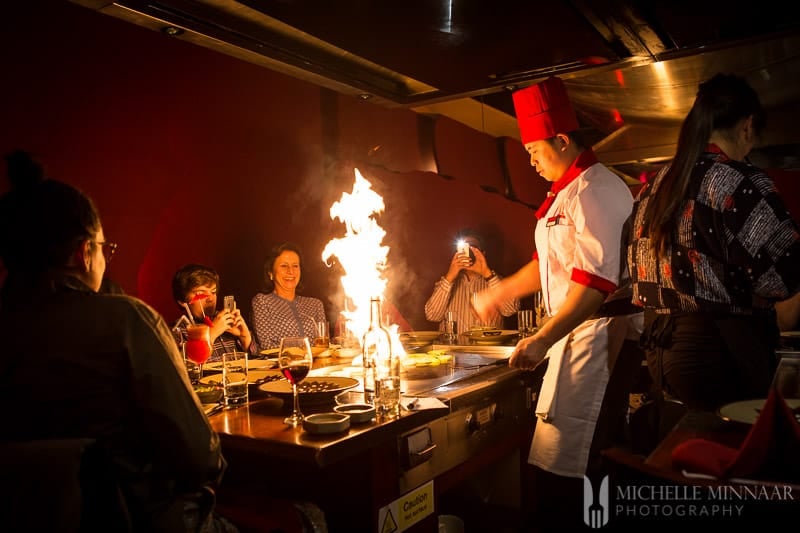 The prawns used in appetiser proved to be better quality than the ones found in Chinese restaurants that taste of plastic. Simply presented, we started eating while watching the chef get on with the next course. Bam, bam, boooosh, bam, clank! Our food was coming now thick and fast. 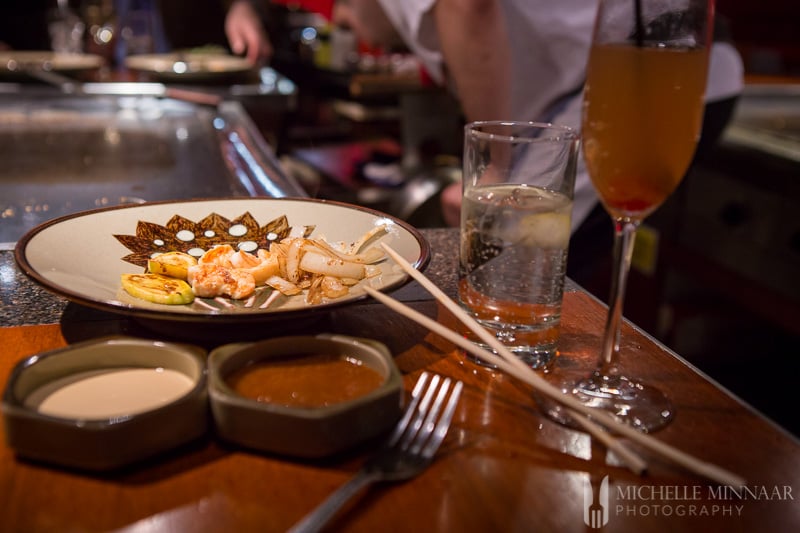 Two sauces were served with the main courses. The brownish one on the right (photo above) is ginger based and meant for seafood. The left, which I almost mistakenly used with prawns because it almost resembled Marie Rose Sauce, is meant for steak. The Japanese horseradish sauce was divine and went well with everything, even the fried rice. 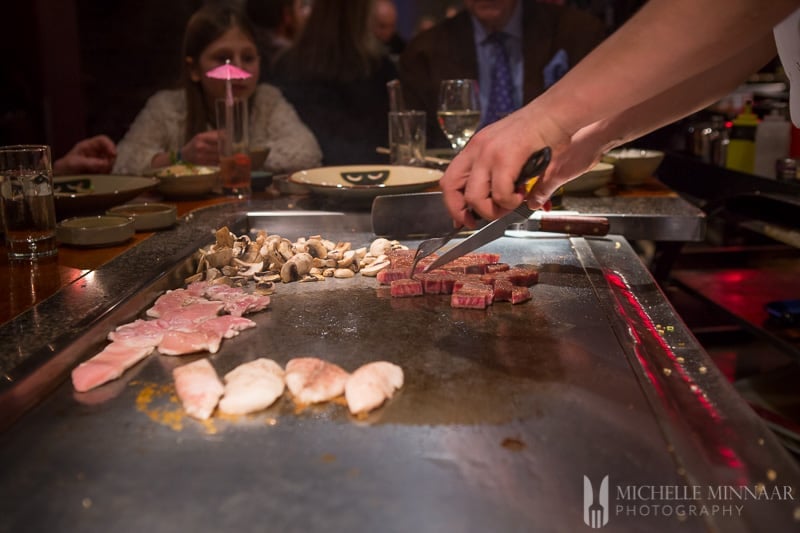 Hands down the star of the night was the Miso Black Cod. At the touch of a fork the gleaming, fat flakes gave way. Combined with the miso glaze this dish simply couldn’t be faulted. 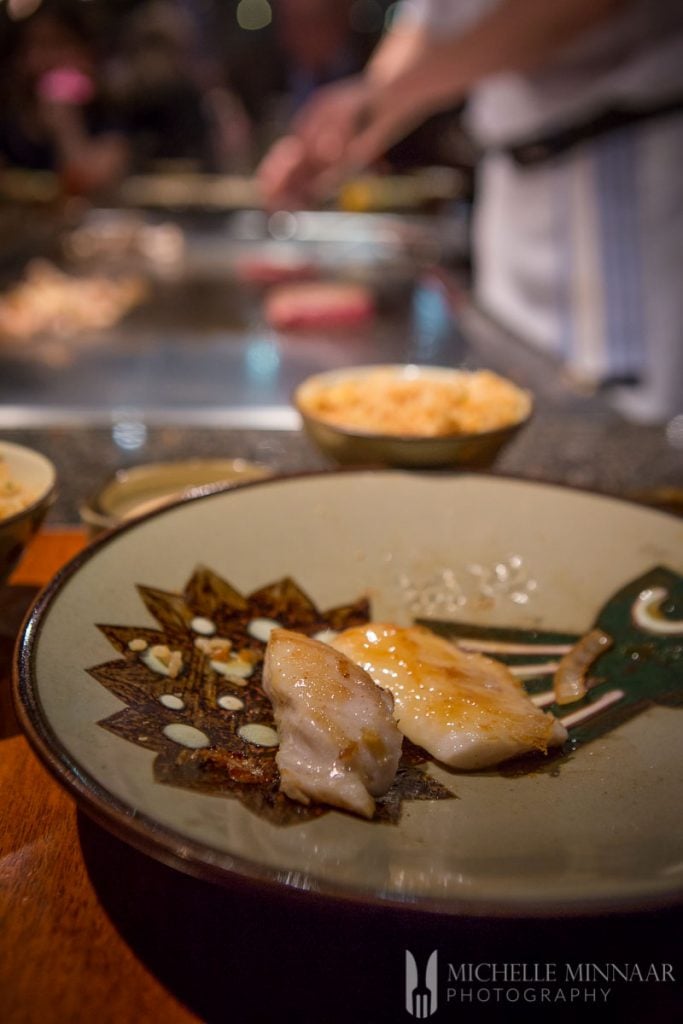 Our meat course, served with mushroom and beansprouts, was Filet Mignon and Hibachi Chicken, both superb. Even though chicken breast was used there were no dry, chewy bits. 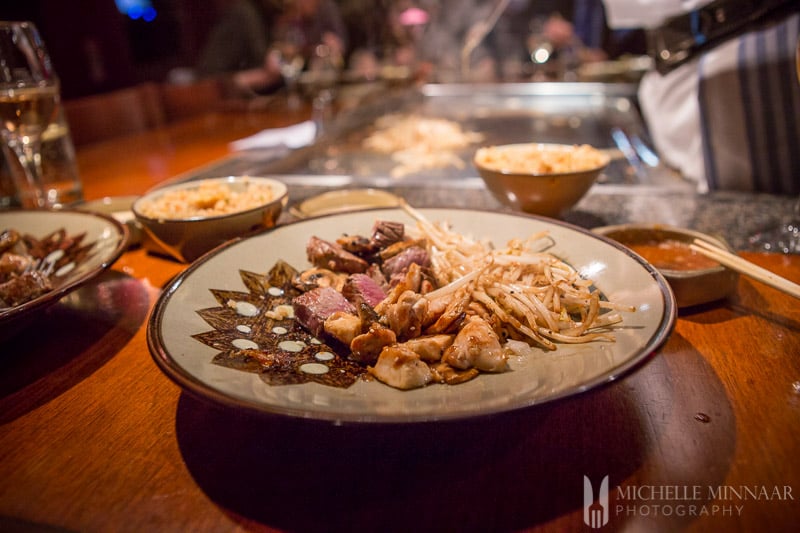 The whole process worked like well oiled machine, efficiently churning out one plate after the other. By now we were properly stuffed and struggled fitting in the Ice Cream Tempura, which is an unusual dessert but nonetheless a great way to end the evening. 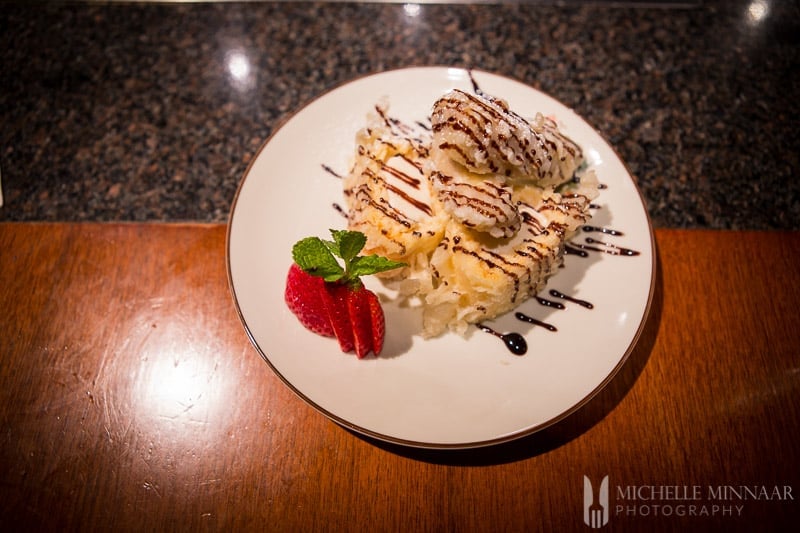 The Wolf of Wall Street might have been an outrageous movie and got the plot wrong regarding Rocky Aoki but one thing it did portray correctly was the theatrical experience. I would love to see my kids’ faces when I take them to Benihana for a treat later!

P.S. I was a guest of Benihana.