Dear El Cantara, here is why you won’t see me again tamara, or the day afta… 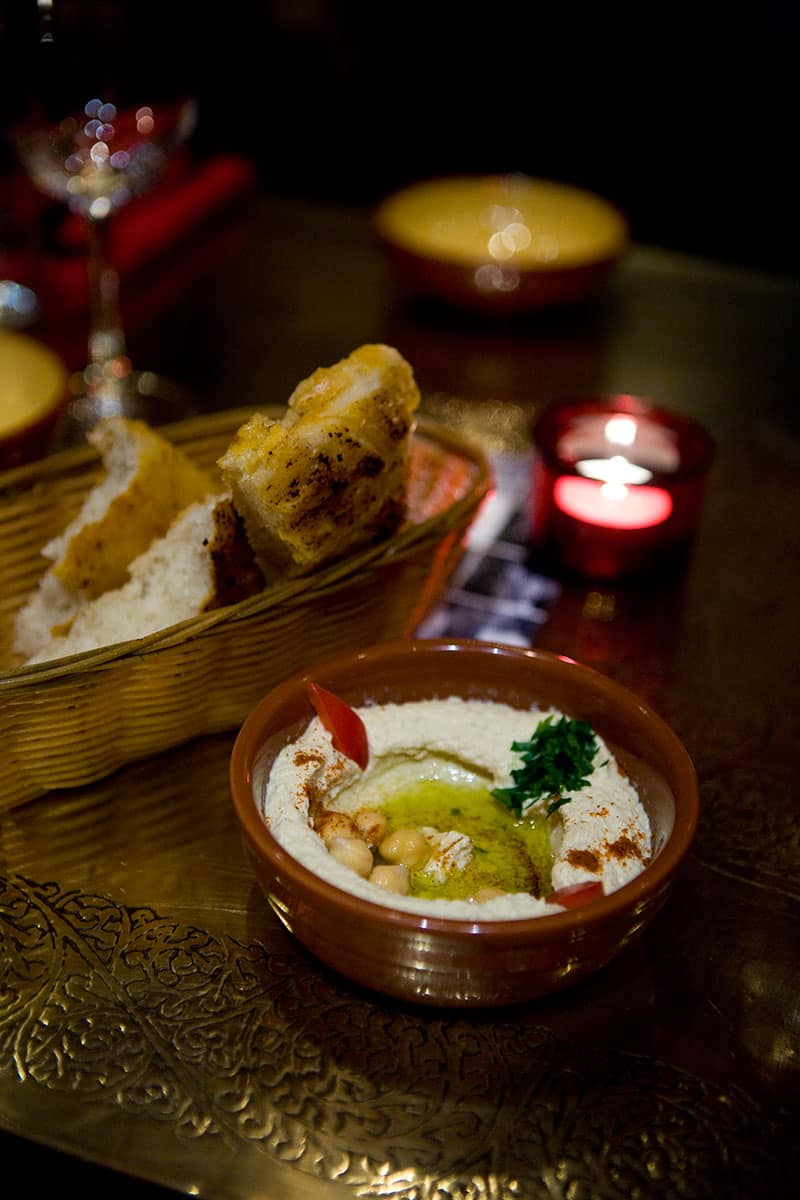 As I walked into the establishment I could see a lot of money was splashed on the decorations and fittings to ensure the feeling that you have stepped from a cold, wet London into the warm glow of Marrakech. After I got seated warm, freshly baked bread was placed in front of me accompanied by olive oil and balsamic vinegar. So far so good! 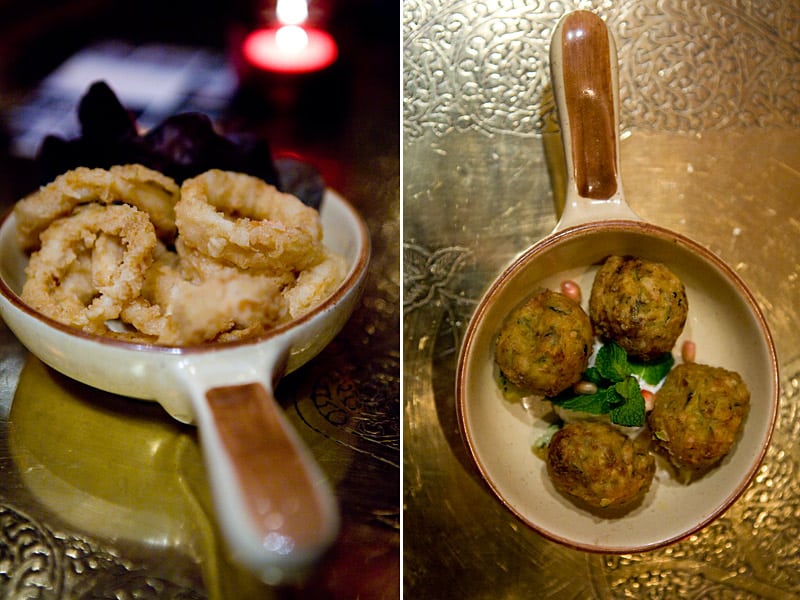 Unfortunately, it went all downhill from there. The smooth Hummous (chickpea puree and tahina with lemon juice, £4.25) was not too tangy but satisfying and the Calamares Fritos (deep fried squid in a light, crispy batter, served with garlic mayonnaise, £4.75) just tender enough. Unfortunately, the other starters underwhelmed, e.g. Albondigas (beef meatballs in a rich tomato and cumin sauce with garden peas, £5.25) was uninspiring with frozen peas floating in the sauce. The Courgette Fritos (shredded courgette and goat’s cheese served with rosemary yogurt, £4.45) can be best described as “oily mushiness”, and the Spinach & Feta Cheese filled Filo Pastry (£4.75) was just downright bland. 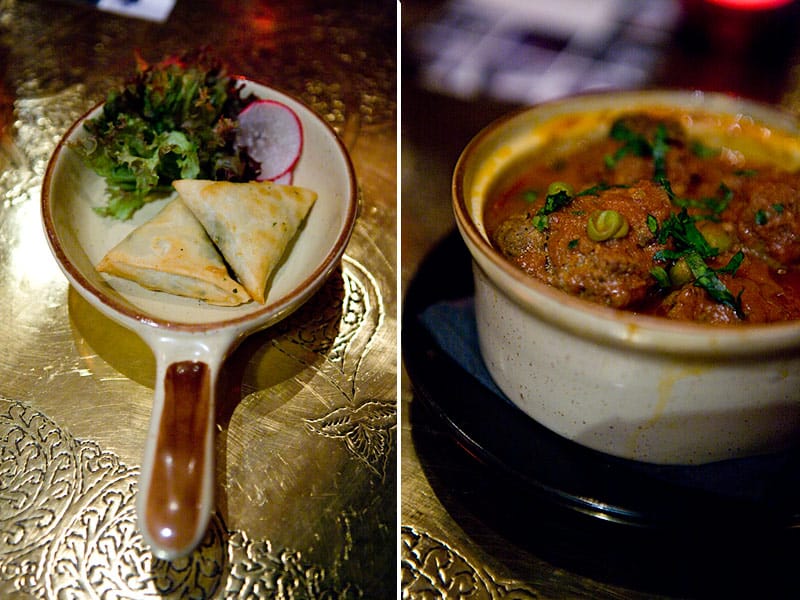 The best starter by far was the Pastilla of Chicken (savoury chicken baked in a thin pastry with almond and cinnamon, £4.95). Crispy, crumbling pastry crammed full of sweet, chickeny goodness – it was absolutely more-ish. In fact, I’d like to try to prepare it at home! 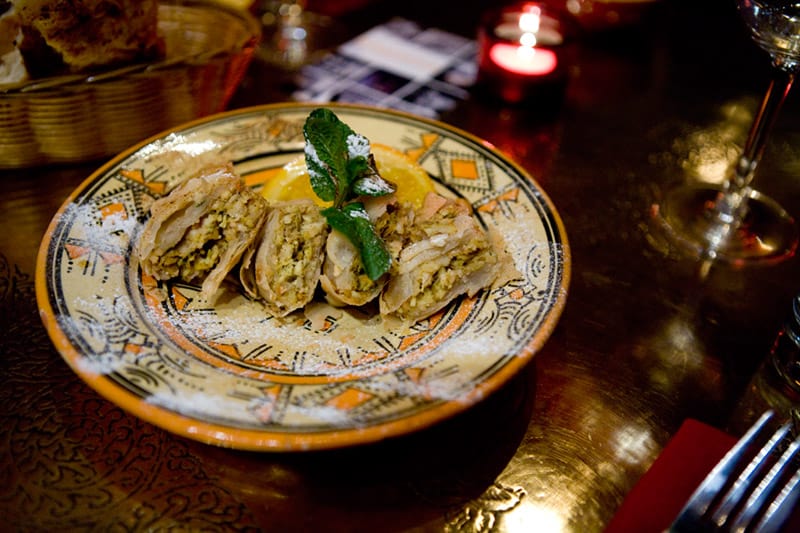 Dishes were cleared from our tables and tiny plates (pictured below) put in front of us. We were meant to eat out of them. All I know is that it was an epic battle to slice on the ridiculous thing with rice and couscous spraying in all directions in the process. Here were the main courses… 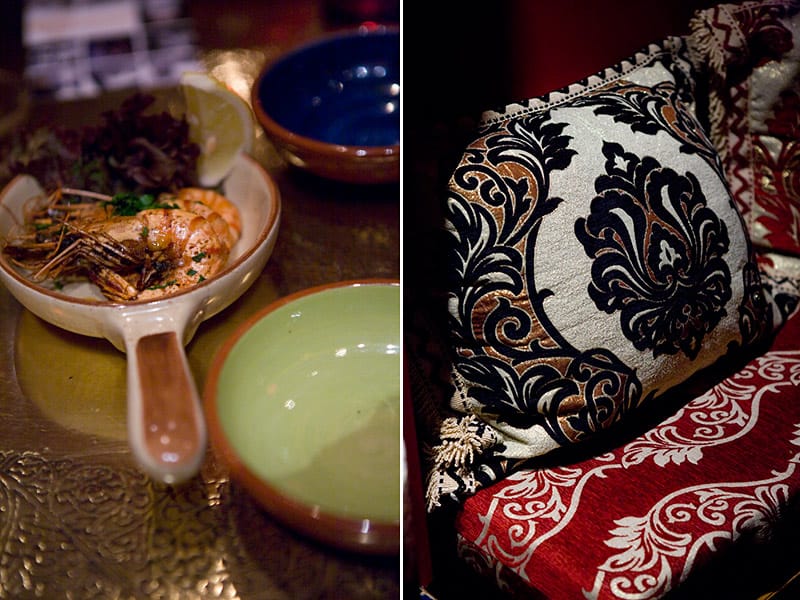 The Vegetarian Tagine (mixed root and vine vegetables in an aromatic sauce, £12.95) was one of the most unappetising food I’ve seen in a long time. For a few vegetables that appeared to had been simply boiled with a dash of salt I found it extremely pricey. I dared not to touch it. My gut instinct was correct when I heard the scathing remarks from victims who were braver than me. 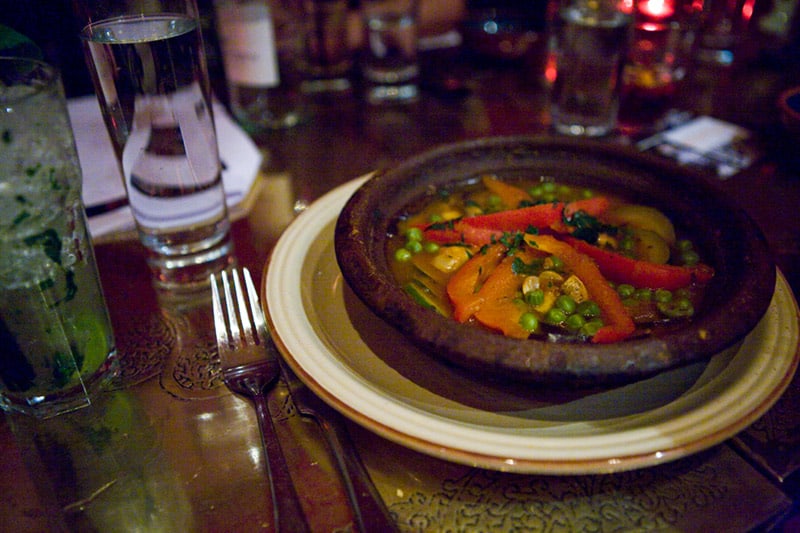 For £14.95 the Paella Valenciana’s (seafood paella with prawns, squid, mussels and chicken) portion was extremely generous – enough for two people to share. Too bad the soggy rice was overcooked, the wonderfully big prawns not cleaned, and the clams and mussels shrivelled. The whole concoction had utterly no flavour at all. 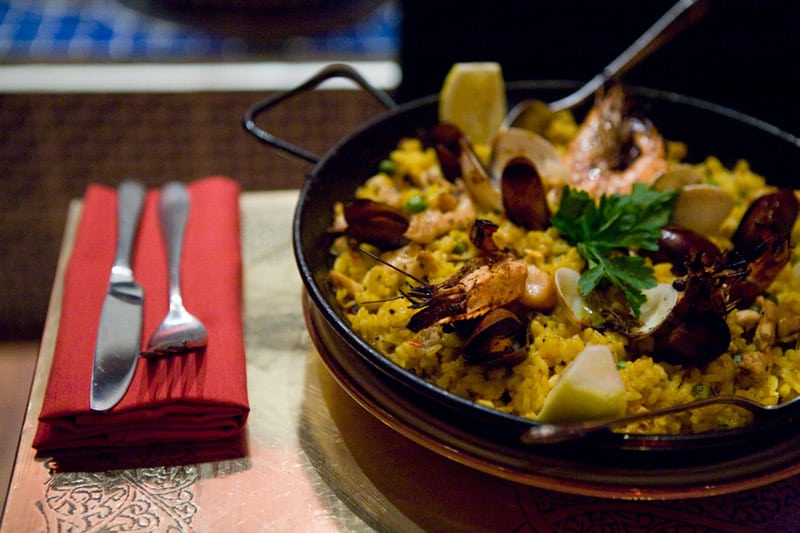 Yet again, the plateful of the Mixed Grill (selection of chicken, lamb & kafta, £14.45) was big enough to make two people very content. What a shame the meat and rice were dried out. 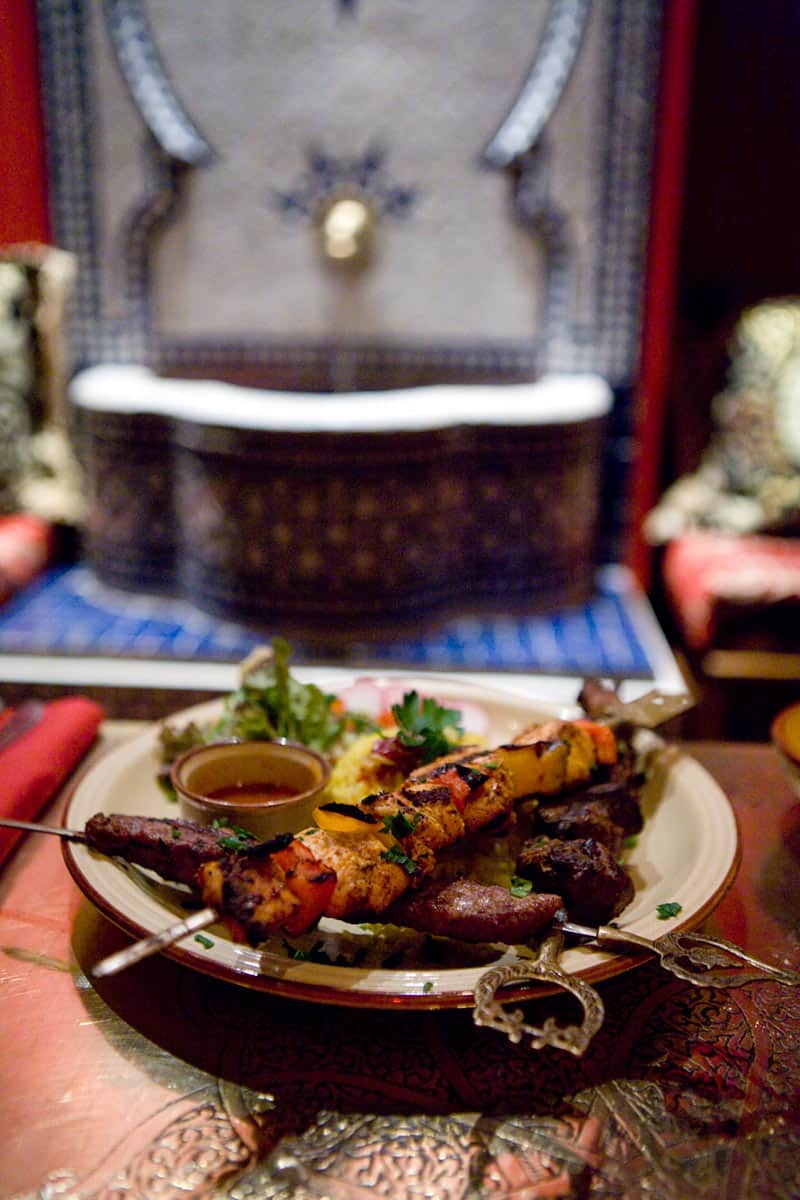 Lamb Tagine (with cinnamon, honey, prunes and rosewater, showered with almonds, £13.45) has become such a cliché in Moroccan cuisine, but you just can’t go wrong. The dried figs and prunes paired beautifully with the meltingly tender meat and the flavouring was done just right. This was the best main course by far! 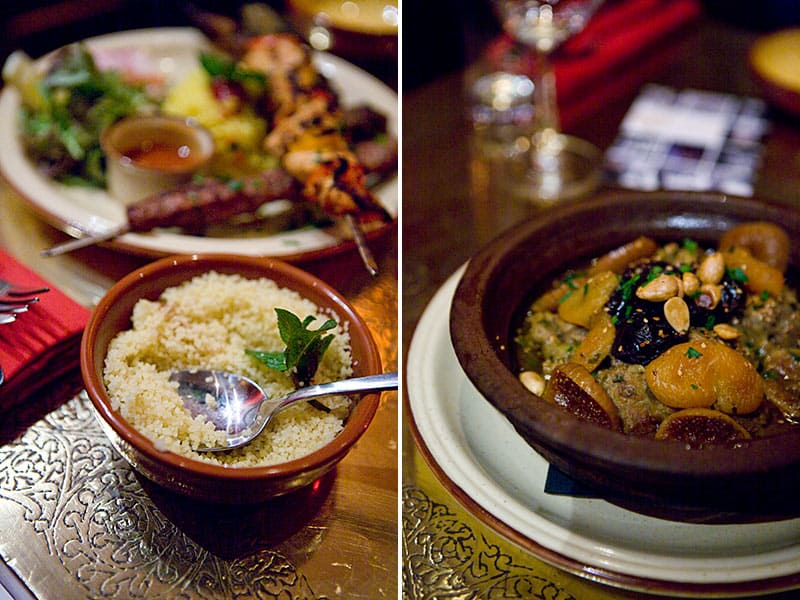 Everyone’s favourite Spanish drink, Sangria, was readily available, albeit the non-fizzy type. The El Cantara Lemonade had the definite wow factor but annoyingly three-quarters of the glass was filled with crushed ice, a not-so-good factor. 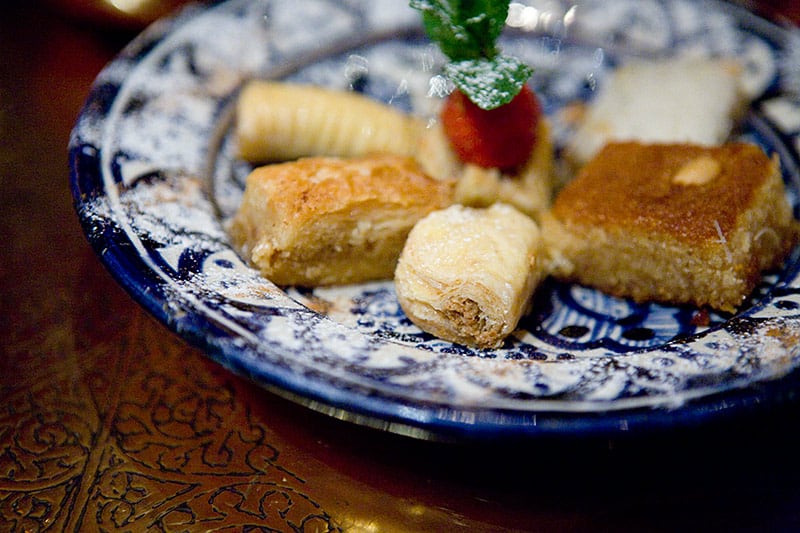 One of the best desserts to come from the Middle East is Baklawa. These were disappointingly stale. 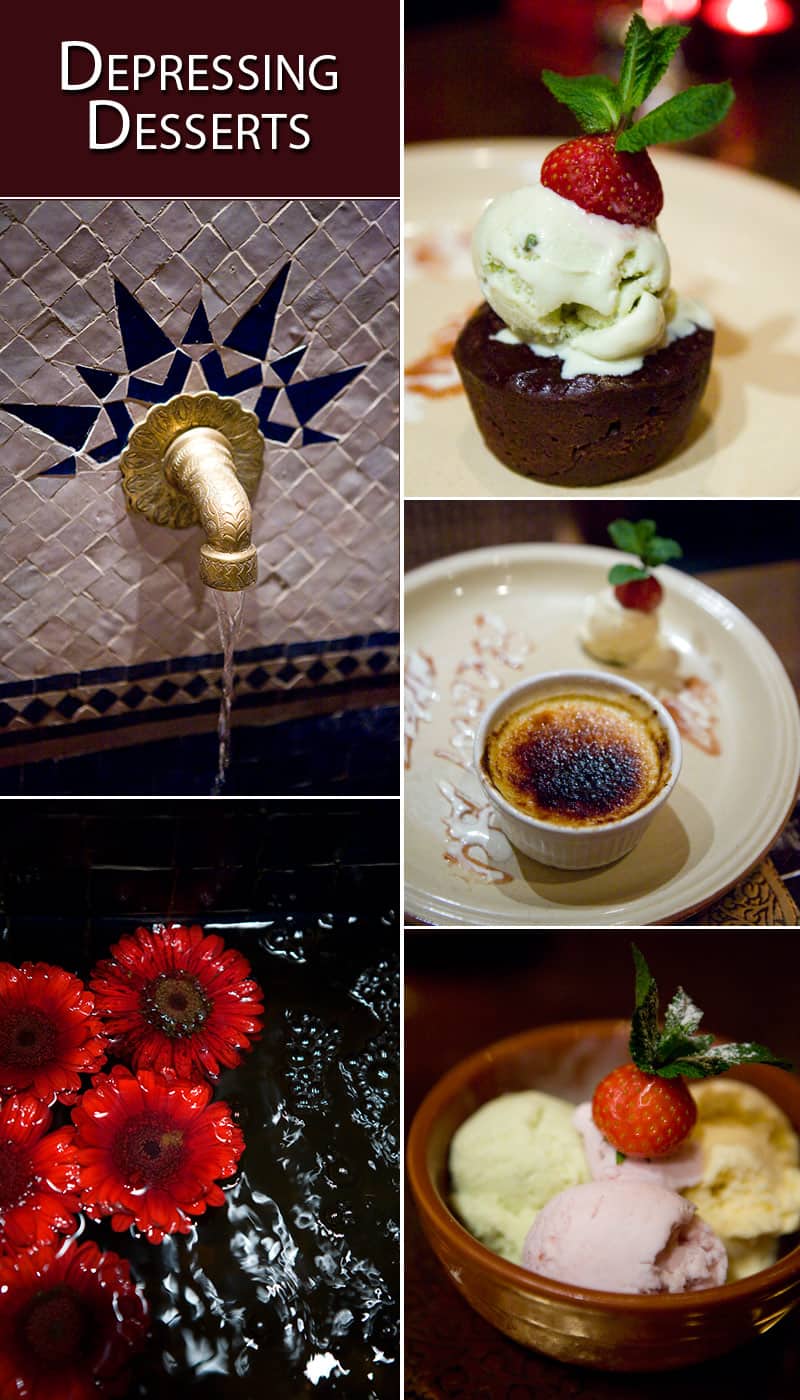 The idea of the date and chocolate pudding actually got me hot and bothered but a few spoonfuls of the incredibly stodgy dessert had me plummeting into an ice bath. The burnt Crema Catalana (traditional Spanish-style vanilla custard topped with caramelised sugar, £4.95) was curdled and the trio of ice-creams, strawberry, vanilla & pistachio, was cheap and nasty. Definitely not a good end to a rollercoaster ride of an evening.

4/10: The dishes had so much potential but with poor skill in the kitchen quickly turned into cock-ups.

4/10: If you looked at the pictures you would think I’m contradicting myself but what’s the use of getting plenty of food at a reasonable price if it’s of mediocre, not very enjoyable quality?

2/10: Although the waiters were friendly they were clueless. I left the restaurant as thirsty as if I’ve crossed the Saraha desert and bought myself water at the closest corner shop I could find. No proactiveness was shown from the staff when we peeled prawns and got our hands dirty. Little bowls filled with warm water and lemon would have been much appreciated but instead I had to wave down a waiter and ask for a serviette. The request was met by a blank look. After showing my oily hands did the person decide to bring me a linen serviette. Doh!

7/10: An interesting Moroccan soap was available to wash your hands with.

3/10: I’m all for music to match the traditional setting of any restaurant but when I arrived the music was already loud. When the place started to fill up someone thought it was a novel idea to push up the volume to an ear-deafening level. The music pierced through all conversations and was beyond irritating.

3/10: Right now the restaurant should take a serious look at the kitchen and up the quality of the food that comes out of it because I’m not interested to go back. Ever.