You are here: Home / Restaurants / England / The Cadogan Arms 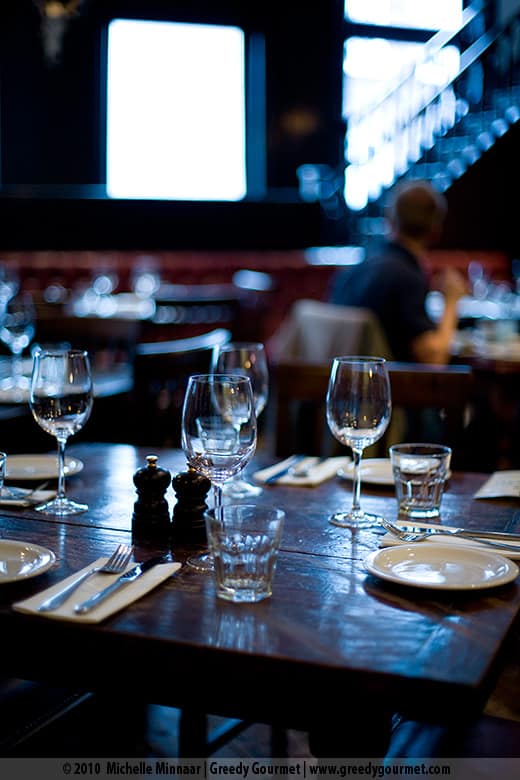 Last year The Cadogan Arms proudly boasts being the runner up for Time Out’s Gastro Pub of the Year. The bar was set high. Could it meet our expectations?

The Cadogan Arms, situated in Chelsea, is owned by the Martin brothers who also own a string of other venues, namely The Botanist, The Gun, The White Swan, The Well, The Empress of India, The Prince Arthur and The Hat and Tun. 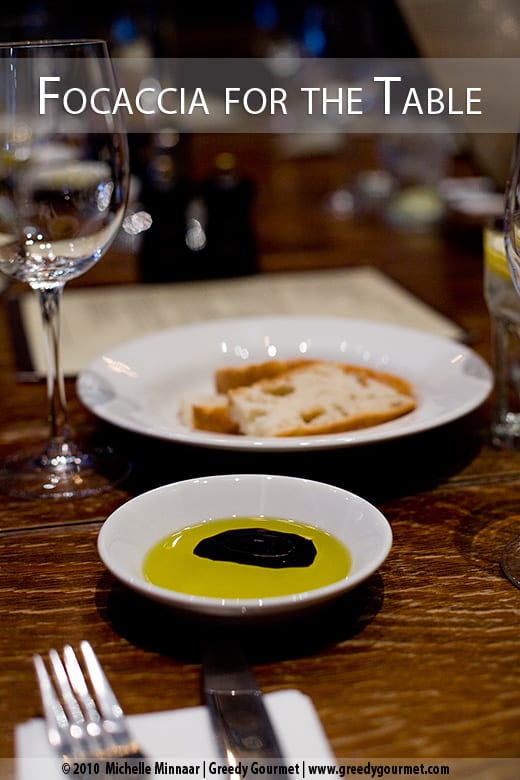 The drinking area has a rustic vibe to it if you look at the tables and chairs, perfect if you want to drink and chat the night away. Although the dining area’s décor is more male-oriented, for avid hunters anyway, with various dead animal heads hung up on the hall, it is relatively small but gives a cosy, intimate feel.

So what happens when a gaggle of food bloggers get together to feast? Strange things, I tell you. Outsiders can’t help but gawk as each one of us circles the table, taking photos of our food and drinks at all kinds of angles. When it comes to actual eating, each person will attack every plate, making sure to taste everything available in the spread. What a bizarre sight indeed but at least now you know a food blogger party when you see one! Let me introduce them. 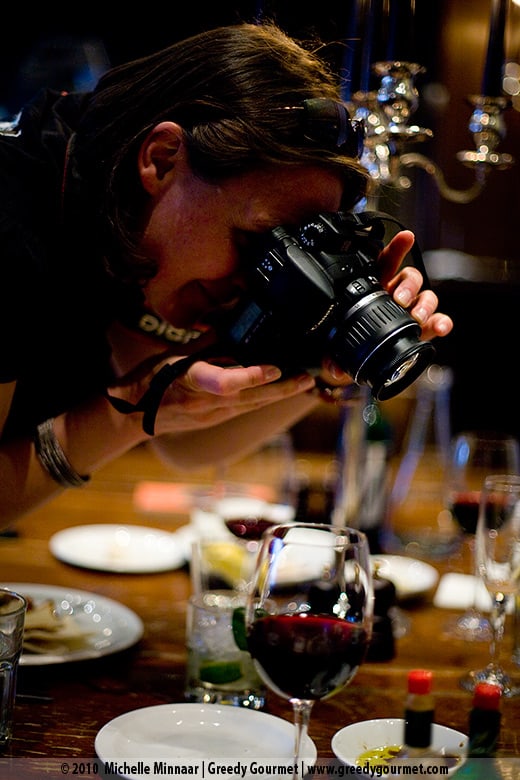 Johanna of The Passionate Cook: An Austrian who has been blogging for 6 years, an occasional caterer and she prepares her family posh nosh. 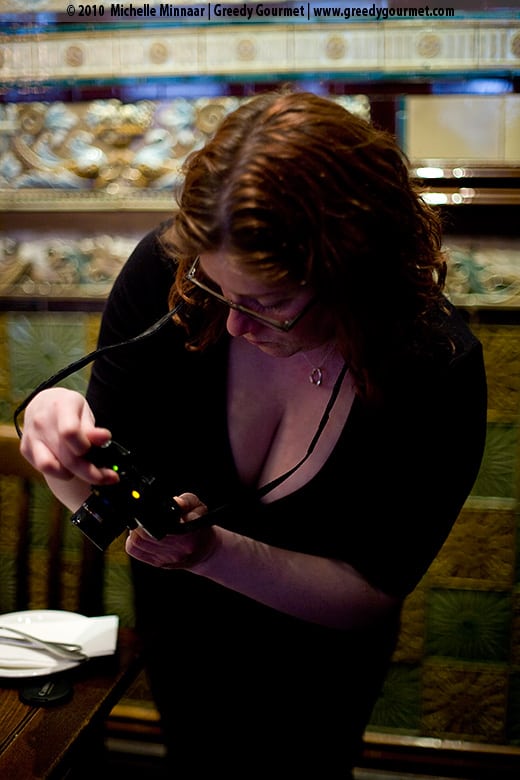 Sarah of Maison Cupcake: A full time British mother who started blogging last year, a big Ottolenghi fan and she regularly bakes goodies that are to die for! 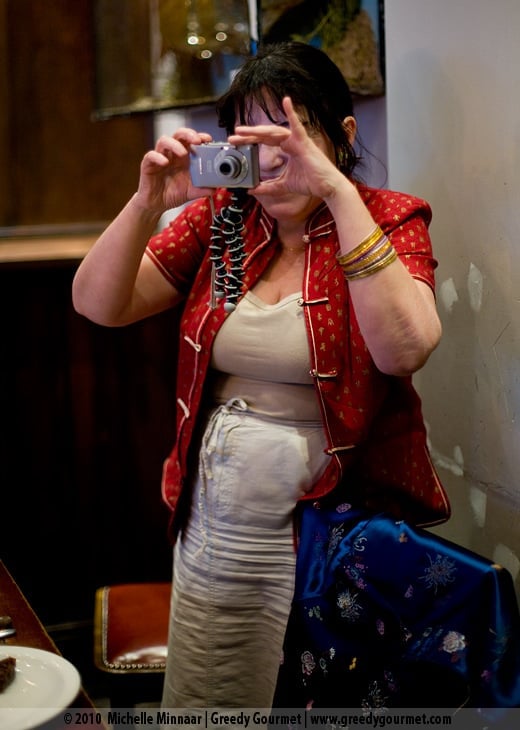 Solange of Pebble Soup: A French lady from Lyons who is a professional food writer and helped us evaluate the authenticity of some of the evening’s dishes. 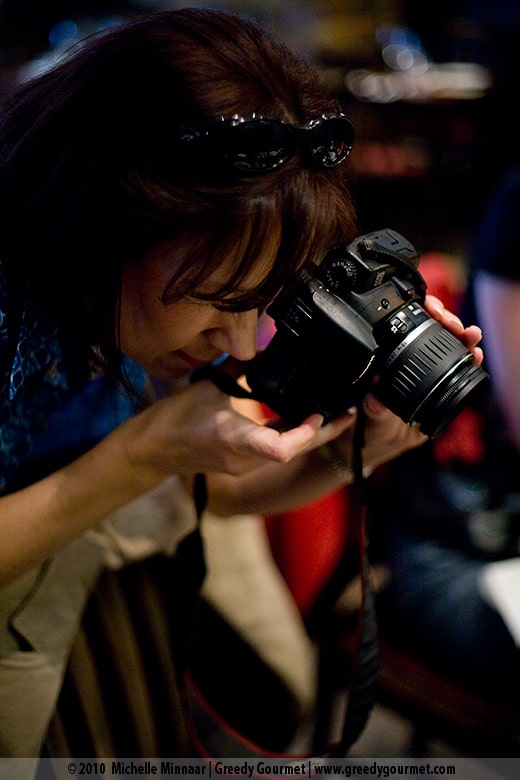 Jeanne of Cook Sister: Fellow South African blogger who has also been at it for 6 years. Her writing will blow your mind!

The cocktail menu was somewhat limited and when I asked if the bar has anything sweet, fruity and fizzy available, I was immediately offered an off-menu cocktail, Peach Bellini. Only ten minutes after all the others’ drinks arrived did the Bellini come, by which time I seriously thought they forgot about my drink. In my desperation I guzzled it so quickly I completely forgot to take a photo of it. It hit the spot though! 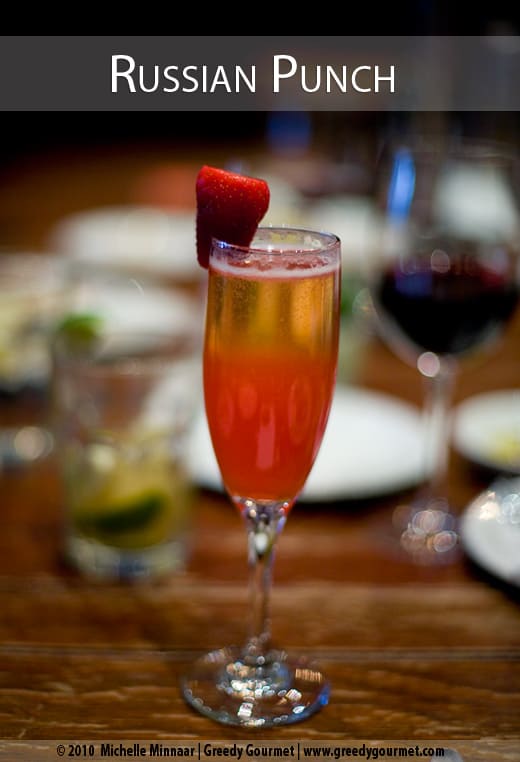 My second cocktail of the evening was based on a Russian Punch. The barman committed a massive faux pas though, by using a frozen strawberry as a garnish. Only when it was too late did I sit with the rubbery exterior of the offensive fruit in my mouth. The insides were awfully squidgy because the membranes had broken down in the freezing process. However, the cocktail itself tasted beautiful. 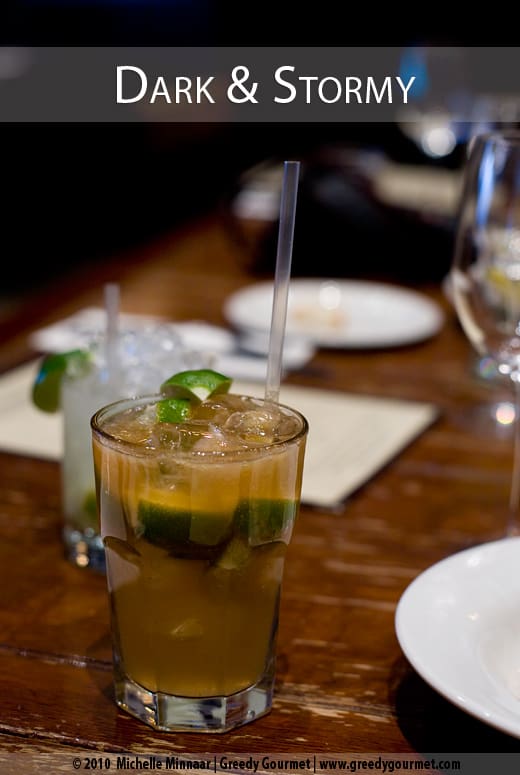 Jeanne was so fond of her rum cocktail, which had a strong kick, that she ordered a second one which mellowed her for the rest of the evening. 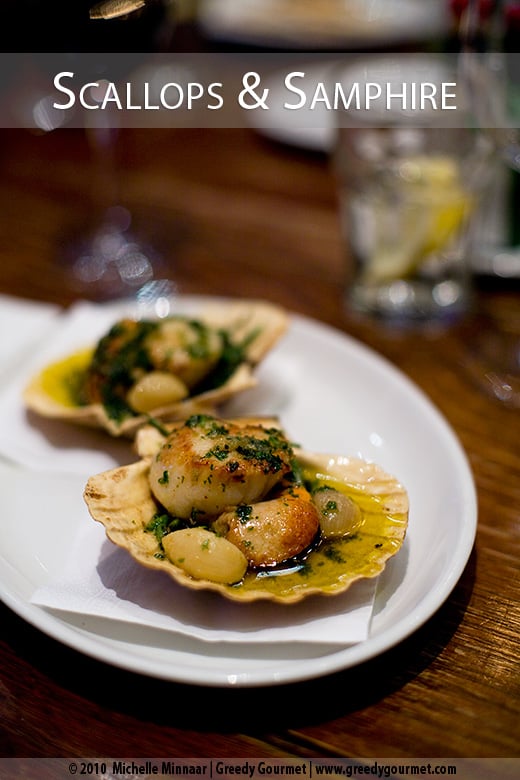 For starters I had the scallops. Samphire is one true British ingredient that is rarely seen on restaurant menus and the fact that it was used was a nice touch. The sweet, voluptuous scallops were divine but there were only two and I yearned for more. 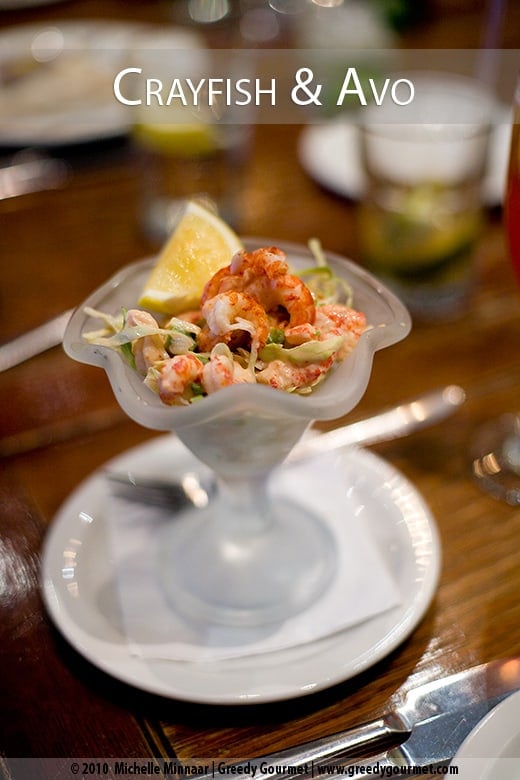 Jeanne ordered the Crayfish and Avocado cocktail which was terribly average. It is a refreshing change from boring prawns being used but the quantity of avocado was miniscule. At least the latter was ripe and not rotten.

Sarah raved about her oysters, Johanna thoroughly enjoyed her steak tartare and Solange’s delicious portion of chunky rabbit and duck terrine was so huge she urged everyone to try hers.

I couldn’t help but be deeply disappointed that the rack of spring Welsh lamb, which I have been ogling online for weeks, was not available for the evening. Even more puzzling was the fact that we were there on a Saturday night, prime-time, when you would have expected the kitchen to be fully stocked. This time not even poor, old Eyjafjallajökull could be blamed, since the lamb comes from Wales. 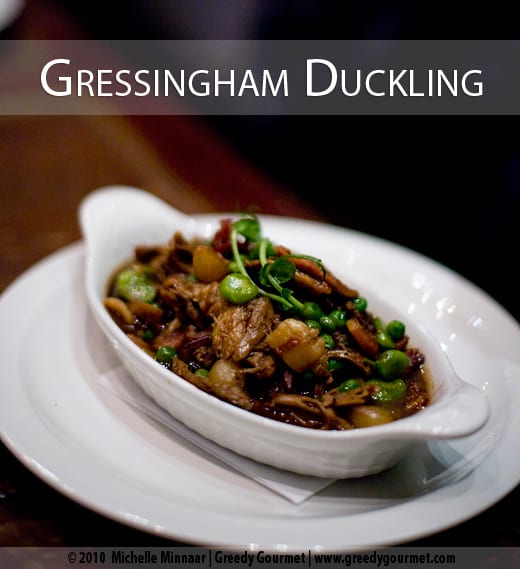 The kitchen made a wise choice by using Gressingham duck, which has so far never disappointed me. We all expected a whole duckling to be presented on a plate but surprisingly all the hard work has been done for us and instead there were pieces of sweet, tender, luscious meat mixed in with peas, broad beans, bacon and pearl onions. I regretted not ordering this dish and if I ever return to this restaurant I would have this without a moment’s hesitation. 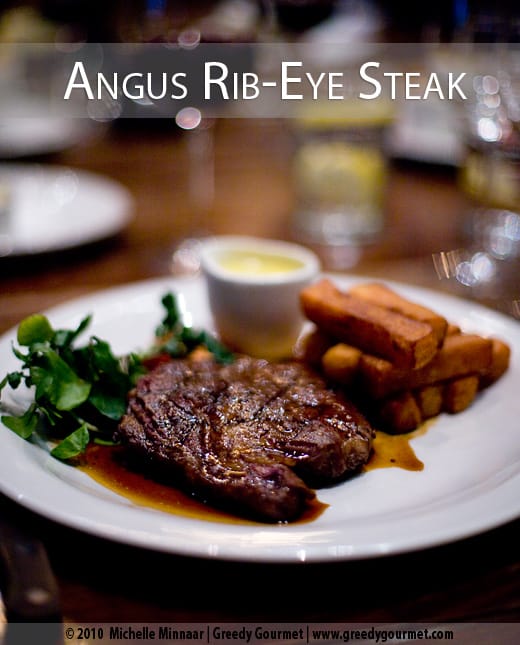 The British public is not known for liking meat rare and most restaurants seem to err on the side of caution when grilling meat (overcook rather than undercook). Mine veered towards medium and got sent back. The second steak was perfectly cooked and the Béarnaise sauce was divine as everyone soon discovered and it disappeared quickly as everyone dunked their chips in it. The hand-cut chips were crispy on the outside and fluffy on the inside but I preferred the French fries.

On the side dish menu, I found the variety of potatoes used overkill. The only things they missed offering were Boiled New Potatoes and Baked Jacket Potatoes. As far as vegetables go, there are mostly leafy greens to choose from. It would have been nice to see for example root vegetables featured too. The only creative item was the peas, bacon and pearl onions which is also served with the duck. 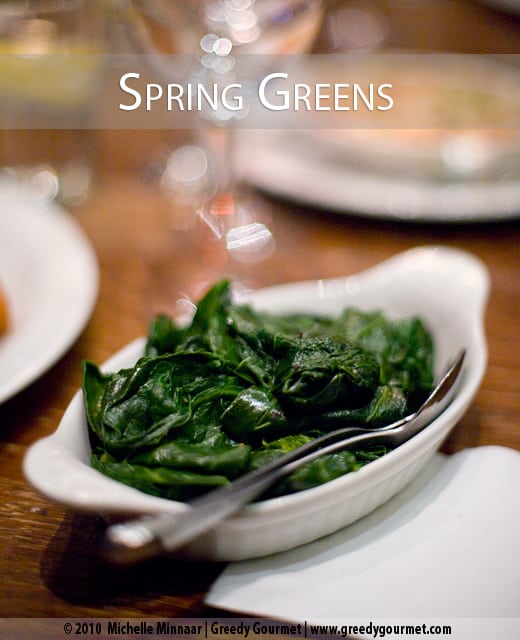 Although there is nothing inherently wrong with this side dish, it was dull. A bit of garlic and chilli or even just a dab of butter would have spruced it up a bit. 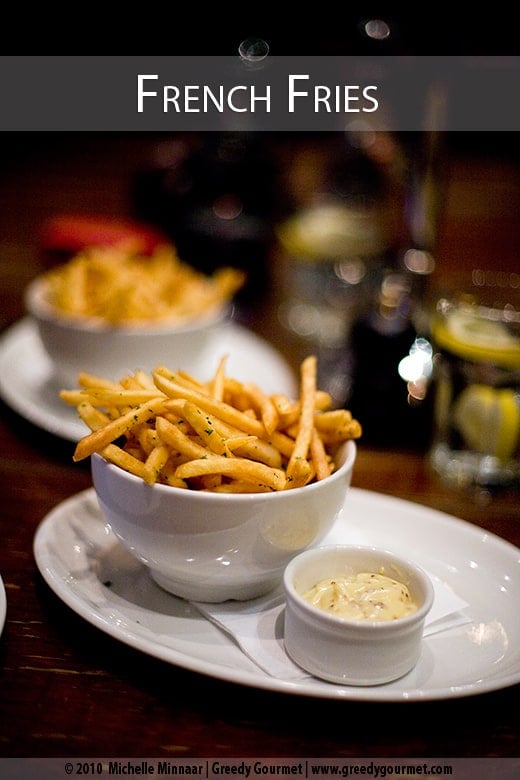 Everyone raved about these chippies that reminded me of McDonald’s version on a good day. 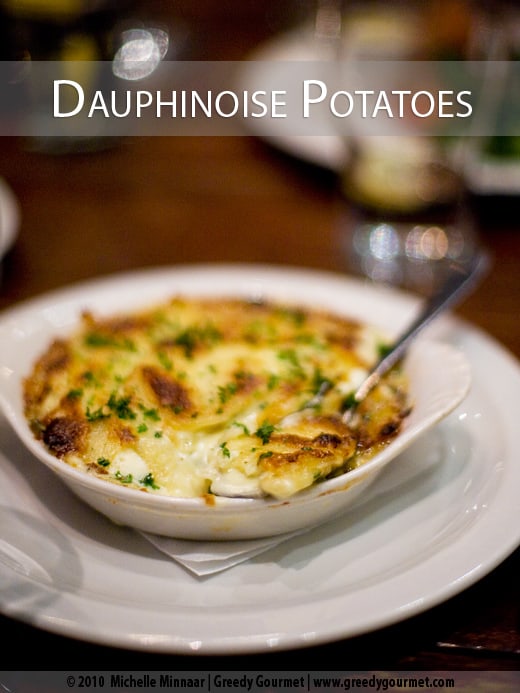 Of the four potato side dishes available I liked this one the best. You simply can’t go wrong with something that is laced with cream and garlic! 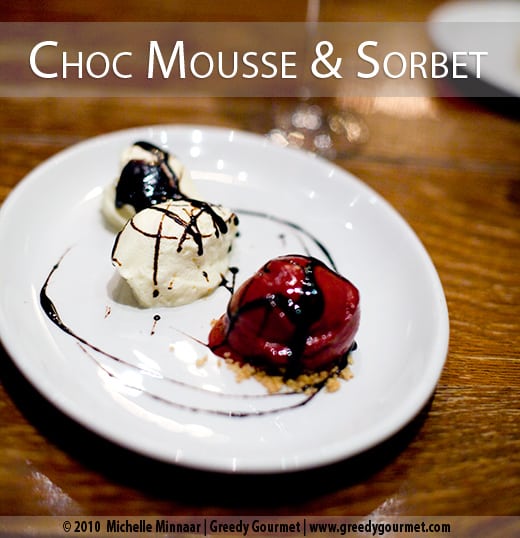 The feeling I got was that the chocolate mousse has been very freshly made and didn’t have time to set and chill in the fridge, i.e. it was warm and runny. The blackberry sorbet was pleasant enough but what gave this above average dessert an edge was the balsamic vinegar reduction with its sweet and bitter tang. 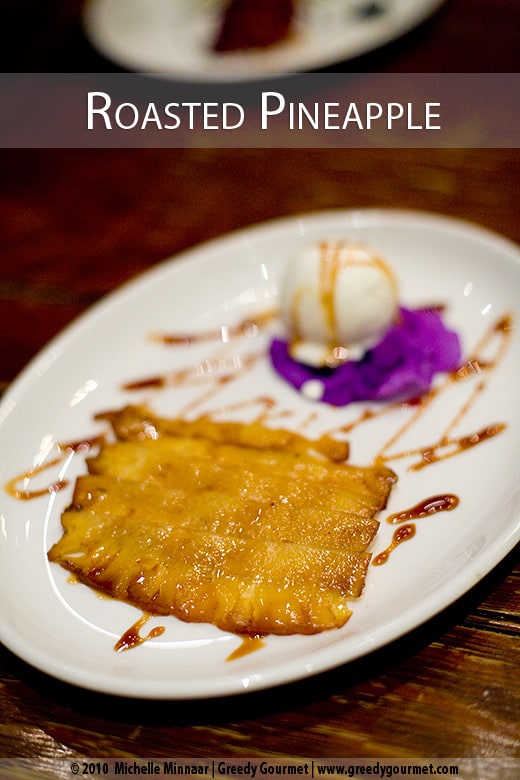 Kudos to the chef who used pineapple in a dessert for once. Although I couldn’t detect the chilli I appreciated the ultra-thin sliced of syrupy pineapple. The crème fraîche sorbet was another off-beat element to this dessert which was universally praised by the group.

7/10: Some dishes were excellent and a few average. No flops though!

9/10: Apart from the scallops the portions were very generous. My three courses plus a side dish amounted to £40, minus the two cocktails. Not bad for Chelsea.

8/10: Although I waited mighty long for my cocktail the rest of the service was good.

3/10: The bathrooms desperately need upgrading. The toilets screamed for a good bleach and scrub and when I sat on the seat it fell off its hinges (No, I’m not that fat). The plumbling is shite. Literally. When Sarah flushed after she finished the previous user’s “contents” came back up.

8/10: Everything you would expect from an upper market pub.

6/10: By London standards, the restaurant is quite far away from a tube station. (Maybe it is just me who found the long walk tedious being heavily pregnant and carrying two heavy bags to boot.) If you live locally, I would definitely recommend you give the place a visit.

London had a funny way to bade me farewell. As I climbed onto the train, I had satisfying thoughts about how good the day had been and how much I was going to miss London when I suddenly felt the baby trampling my bladder and realised I needed a toilet pronto. Beggars can’t be choosers and after I finished my business I couldn’t exit the loo – the door was jammed shut! Oh bugger. This was not how I was planning to spend the rest of my Saturday evening. Phoning home to ask Mr. Fix-It to come and help wasn’t going to cut it and I had to do something I have never done before – I banged on the door and called for help. Luckily, after a few minutes a knight in shining armour rescued me by kicking the door in and the embarrassed princess was saved. Who said I don’t lead an exciting life? Nice try, London. Be afraid, be very afraid because in a few months I’ll return to eat you alive!

Many thanks to The Cadogan Arms for the complimentary meal enjoyed on Saturday the 24th of April 2010.