You are here: Home / C. Personal / Losing a Father

If you still have a father, give him a hug and kiss and tell him you love him. Mine died today. 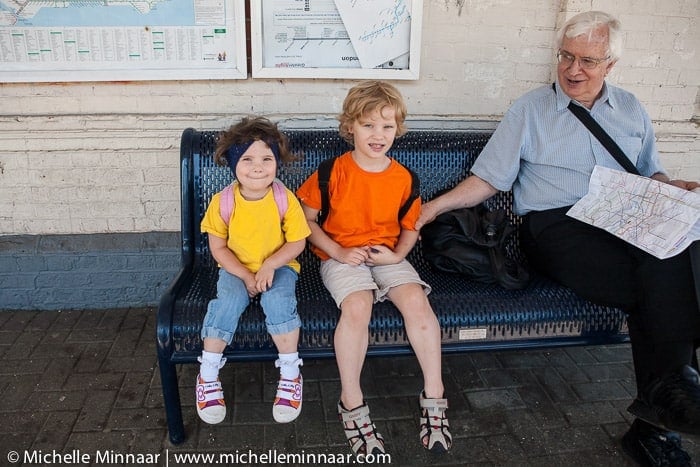 It all happened so fast. He fell and broke his arm, started recovering, and the next thing I knew his heart and other organs were failing. To see a proud, six footer of a man reduced to lying in a hospital bed suffering many indignities was heart wrenching. He was only 71.

The moment I heard the news that my father’s health was declining I jumped on the phone and immediately bought a direct flight to South Africa. In a tiny suitcase I packed the bare necessities, complete with mismatched clothes. Bollocks to the men who say that women can’t be quick getting ready. In between I cried my eyes out.

Sitting opposite a Scandinavian woman in a pinstriped business suit on Heathrow Express I refrained from crying, not wanting to look like a loony. Instead I turned to positive thoughts and remembered all the things I cherished about him. It brought me great comfort and the precious memories I will carry with me forever. Let me tell you more about him.

His name was Gawie. In Afrikaans it’s short for Gabriël. Now you know where my son’s name comes from.

Greedy Gourmet wouldn’t have existed without him. My most engrained memory of him is enjoying food with him.

Every December/January it’s lychee/litchi season in South Africa and we would drive from one green grocer to the other on the hunt for the largest, reddest, plumpest lychees on the market. When we found our treasure we would race home and sit in the backyard and eat the whole 2kg box in one sitting in complete silence. No words were necessary. Sometimes lychee politics came into play as we squabbled and accused that the other party was nicking all the best lychees in the box. Looking back it was quite funny, because we became such lychee pros. Even years after I left home Gawie would enthusiastically tell me about the most beautiful lychees he came across on his travels to the Far East.

I was so keen to have this kind of connection with my kids that I’ve already started a winter tradition in the UK. It’s hard to do with Gabriel because he’s such a fusspot, but the slightest whisper of “chestnut” to Robyn elicits the most passionate response you could possibly hope for in a four year old. We’ll be roasting chestnuts and eating them with butter this year again. And next year, and the one after that. You get the drift. It’s about enjoying the simple things in life together.

Although I wasn’t always the most eager participant in the educational software Gawie bought me, he managed to make it fun and he spent countless hours teaching me things. By the time I started school at the age of 6 I could do a 13 year old’s math homework. I’m not a genius. It was simply the winning combination of an enthusiastic parent who fostered a good relationship with his child who in turn was keen to please and impress.

Around the age of 8 Gawie taught me chess. I got hooked and played competitively in all my spare time until I was 20. A lot of parents these days throw money at their kids in an attempt to relieve the guilt for not making time for their children. Money can’t buy the feeling of knowing my father standing behind me watching every move I make, every single game. He drove me to tournaments near and far and when I lost he felt down in the dumps with me but boy when I came out on top it was high-fives and whoops of joy. Of course, we celebrated with food, more often than not with seafood platters and Buck’s Fizz. Oh, those were the days.

My father appreciated beauty. He constantly saw it in nature, people and the arts. When he was younger he was a keen photographer and when I came along I was his favourite subject – hundreds of photos are crammed into lots of photo albums can attest to this fact. More than 20 years on old school friends still remember my father with his camera taking photos of us.

All around my parents’ house you’ll find big stashes of music, mostly classical and opera. He took me to my first opera around the age of 4 or 5. On drives to school we pretended to be conductors, doing it completely over the top, which was great fun. Sometimes he whistled a few notes to me and then I had to guess the name. At other times he’ll just happily dawdle around and whistle a chirpy tune. There were times I walked downstairs and the house was almost vibrating with the sound of poptastic Strauss music. Sometimes when I drive around and feeling particularly stressed or just really, really adore the aria I would pump up the volume as loud as my ears can handle and let the music pass through me and cheer me up. I get it.

Gawie was a movie boffin. Ask him any trivia and he’d shoot the right answer straight back at you. He was 38 when I was born and started greying early. So by the time I was primary school age and he took me to the movies many people thought he was my grandfather which we thought was hilarious.

There’s a big hole in my heart. It saddens me to think I will never chat to him again on our weekly Skype sessions. I will never see him again in person either and he won’t see Gabriel and Robyn growing up. He was my number one supporter in life, through all the good and bad decisions I’ve made. He was a hair-breadth away from donning a cheerleading outfit, complete with pom-poms, and shouting at strangers to give him a M-I-C-etc. He’s gone.

Sometimes when people die the relatives try to sugarcoat the deceased even though the person was a real bastard when he was alive. This isn’t the case at all. Gawie was human and he had his set of weaknesses but they were so outshone by his plus points that his negative qualities were forgotten.

As a psychologist he touched and changed many people’s lives. When the news reached them that his health was failing, there was an outpour of love and support, something he never expected. Why did people like him so much? He was a nerd. A loner… and he was okay with it. He never pretended to be anything or anyone but himself. When the pawpaw struck the fan, he remained calm. He showed unconditional acceptance. He didn’t criticise. With his self-deprecating humour people were quickly charmed by him.

Gawie was one month away from retirement which he was looking forward to so much. Knowing how I feel losing a father, I can’t even begin to imagine the loss my mother is feeling after losing her life partner and friend of 38 years. 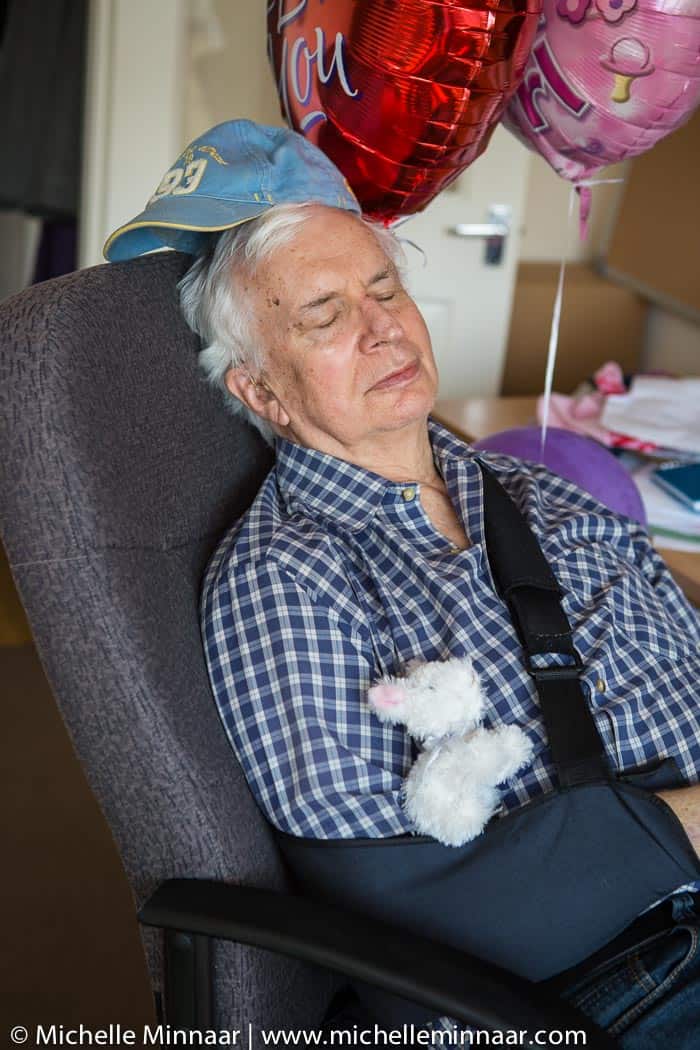 I was dismayed when I realised this was the last photo I ever took of Gawie, three months ago. Why didn’t I take more photos of him?! Then the memory flooded in. It was 10 days after his fall and operation and he was insistent, even in his state, that he and my mother come and visit us. He was worn out and fell asleep in my desk chair. Robyn, the cheeky monkey, decided to have a bit of fun and said we should put a hat on his head. So we did. She then fetched him a fluffy bunny to make him feel better. If you look, you will see the ever so slight smile on his face. He woke up halfway through the action and good sport that he was played along – in on the joke. That’s how I’d like to remember him.

Not everyone strikes it as lucky with getting a good father like I did and I consider myself very honoured and will be forever grateful. If I can elicit just half of the emotions I feel now in my children when I die one day, I’ll die happy, knowing I succeeded as a parent.

I love you and miss you, Gawie. One day when my work here is done I’ll join you again. Peace out. x