Kiwi curd – for cooks who like to experiment and try offbeat foods. 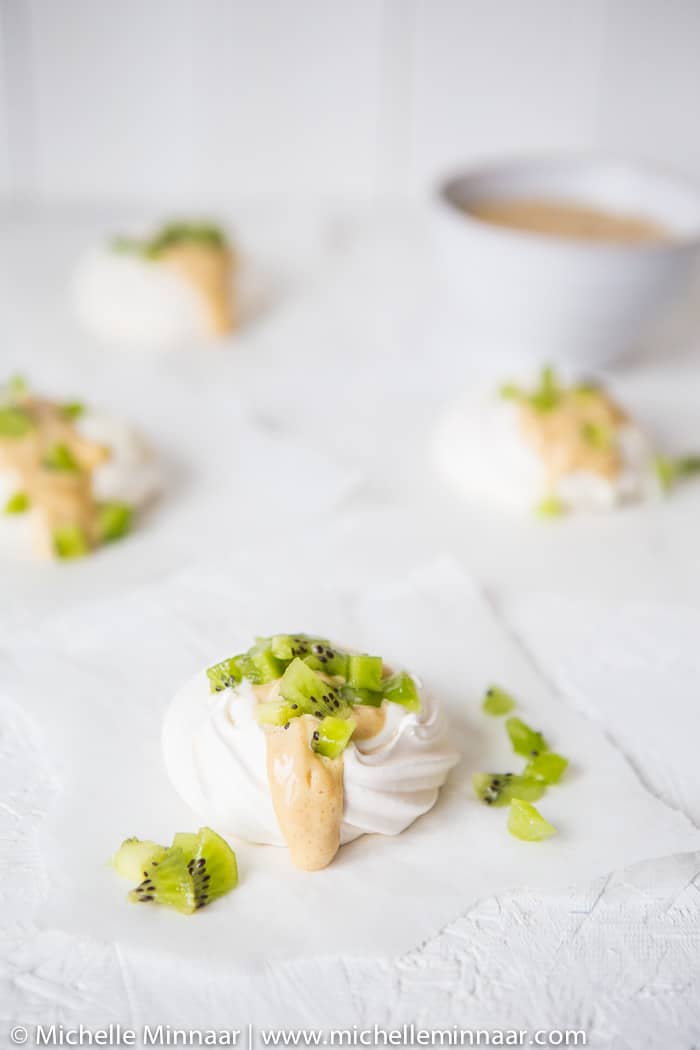 Thanks to Fruitdrop it all began with a massive box of seasonal fruit being delivered on my doorstep. There were apples, pears, tangerines, flat peaches, bananas, raspberries, grapes and kiwis. My once bare fruit bowl was now brimming with abundance and when my daughter came home from school she ogled the mountain of fruit. Instead of whining for sweets, which happens on a daily basis, she asked whether she could have a peach. It must have been due to its novel shape. She loved it and asked for another. She ended up eating three peaches and a pear in one sitting. It just proves that having an attractive array of fruit in sight makes picking the healthier option for a snack so much easier.

Fruitdrop is mainly aimed at corporate clients to promote healthy eating among its employees with the hopes for improved work performance by keeping them healthy. Box prices start from as little as £20 and can be delivered to offices on a regular or ad hoc bases. Nutriboxes, prices start at £40, are also available and these are stuffed full of healthy, less perishable snacks when people get the munchies. Lastly, milk is also on offer. 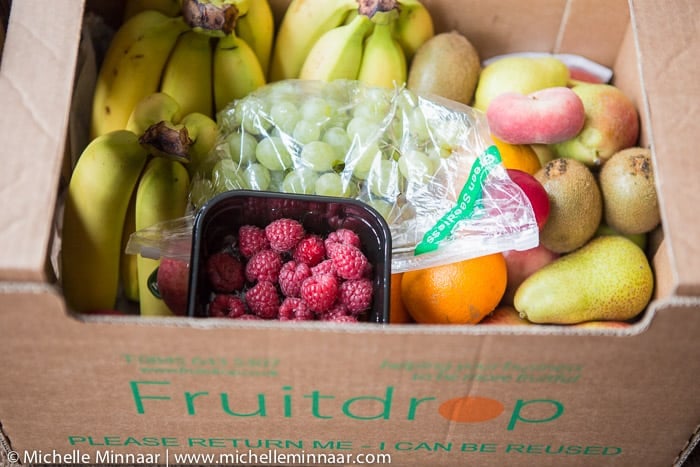 In the meantime I’ve also received a Froothie Optimum 9400 machine. Since it’s an Australian company, the brand is relatively unknown in the UK. Vitamix is quite famous by now but its price clocks in at £600, which is off-putting. At £329, almost half of the latters price, Froothie is much more affordable plus, and this is a big plus, its motor is much stronger at 2,238 Watts compared to Vitamix’s 1,492 Watts. 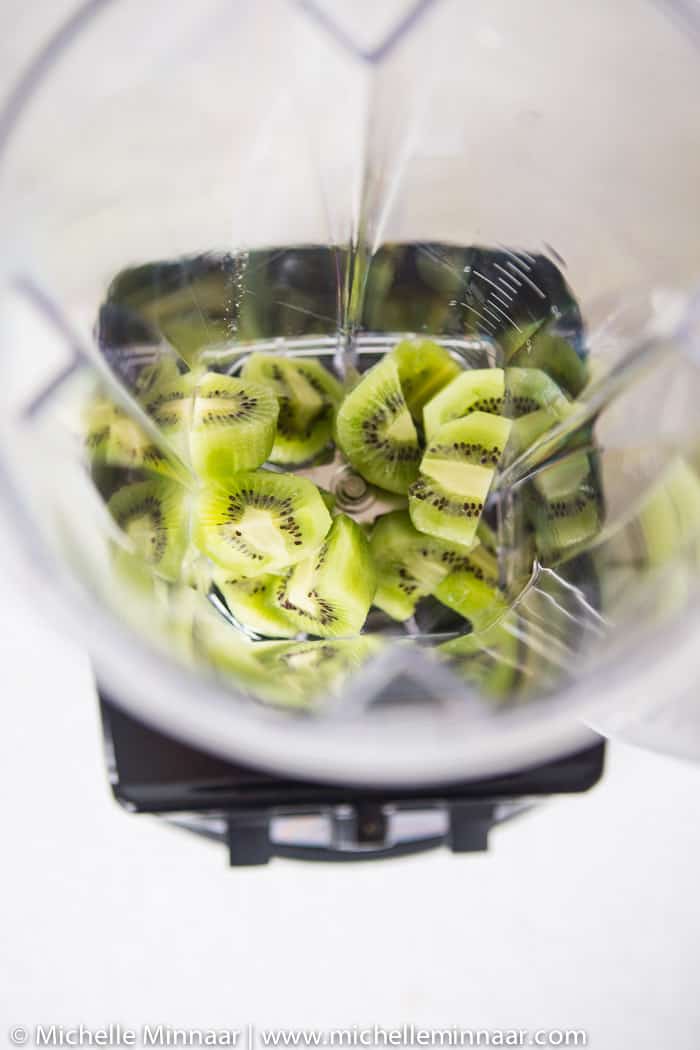 When fellow blogger Jac from Tinned Tomatoes published her Lime Curd I just couldn’t resist making my own. Preparing curd in the old-fashioned way is a pain. Memories came back when I prepared lemon curd for the first time – standing over the hob, stirring what felt like forever. Emotions ranged from pure boredom to frustration to panic, praying I didn’t cockup the mixture by overcooking the eggs. 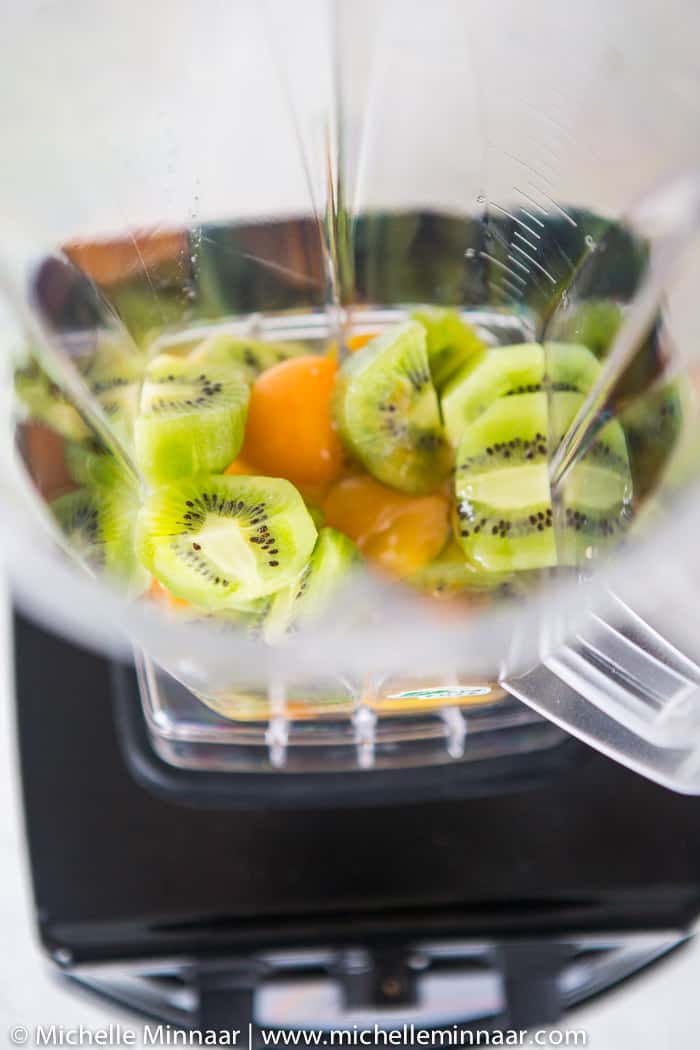 Suddenly life became much easier with the Froothie. It’s a matter of peeling the kiwis, separating the eggs and measure out the ingredients and placing everything in the jug. 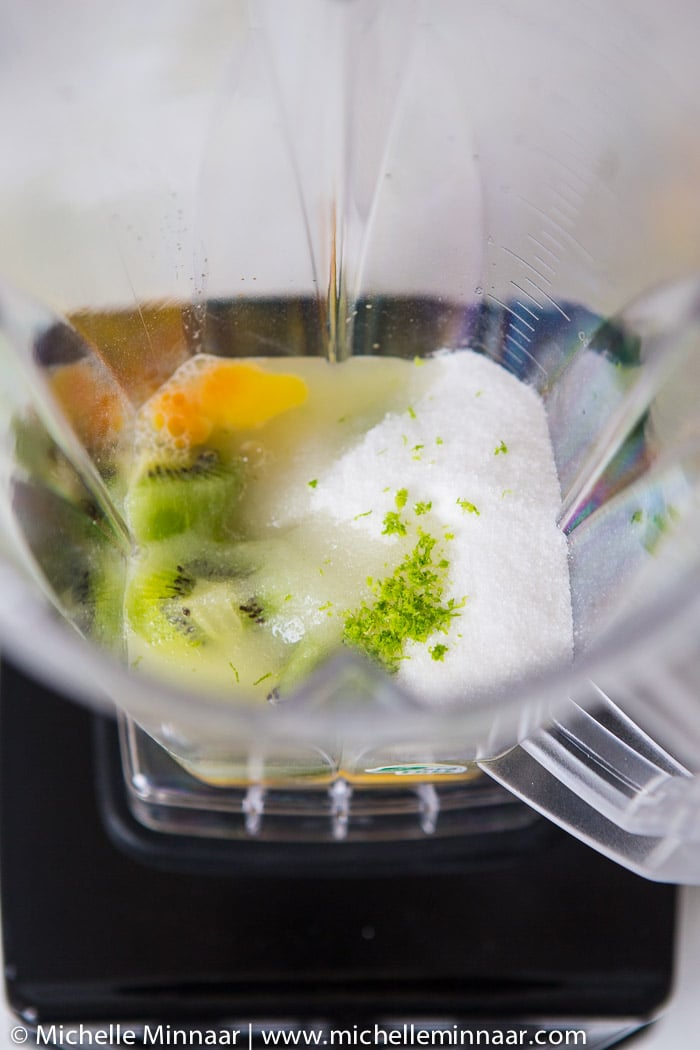 Always start the machine on the lowest setting. After everything has more or less been chopped up and everything is spinning fluidly you can then start increasing the power systematically. 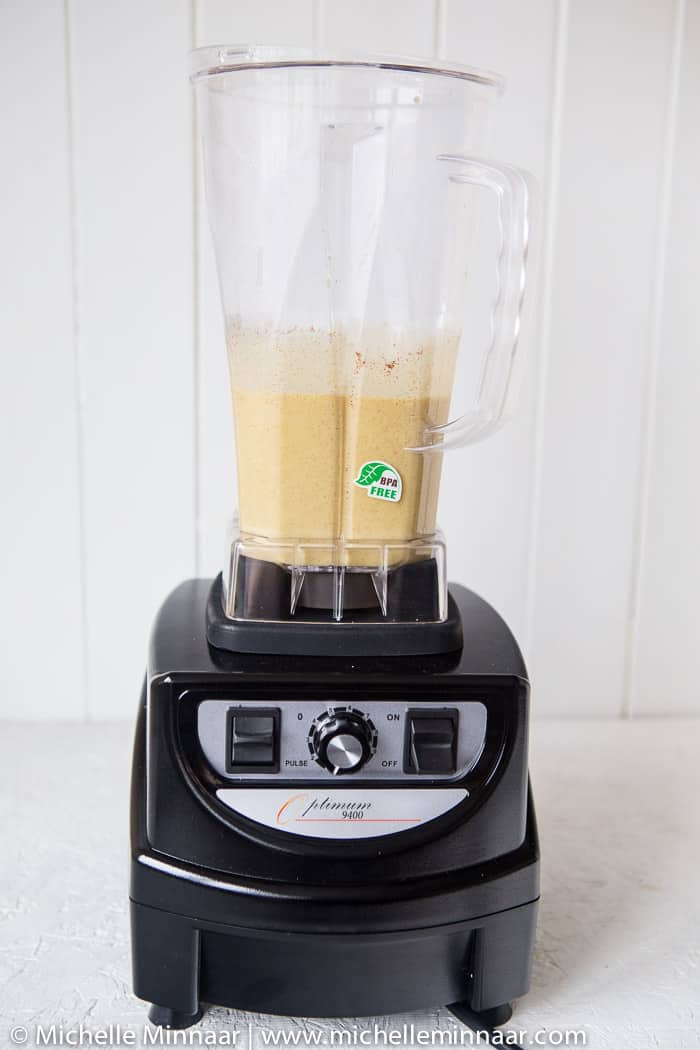 You’ll end up with the maximum setting of 10. This is when you leave the machine alone to work it’s magic for a full 5 minutes and stare in wonderment how you lived without one for all these years. 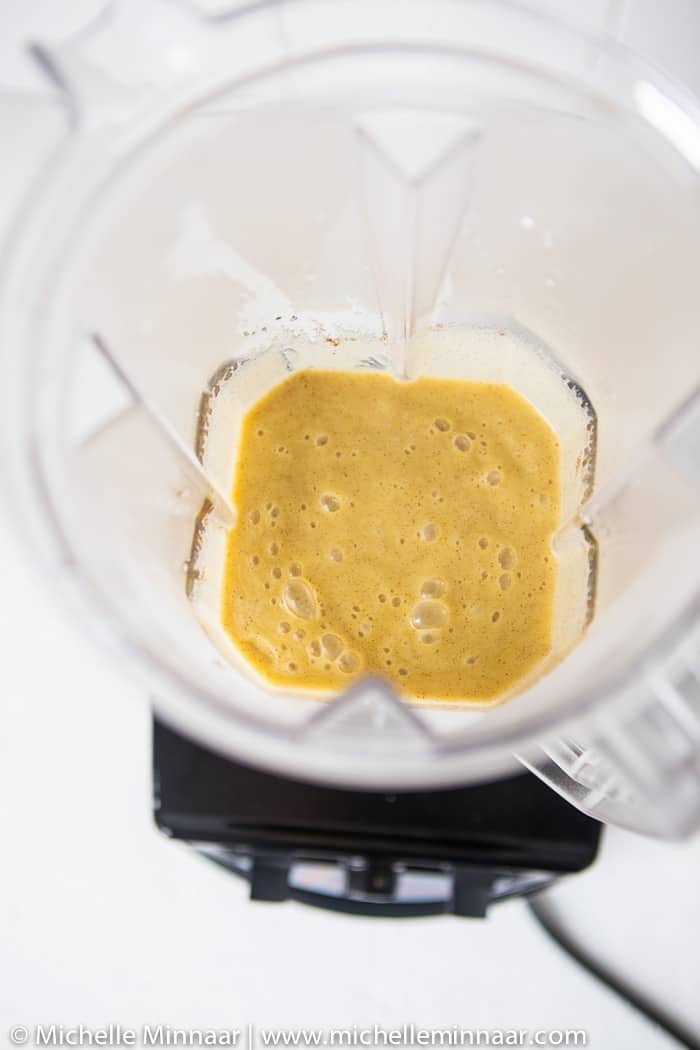 What I found particularly fascinating is how the contents start to heat up after a few minutes, thus cooking the eggs. After the five minutes, cut the butter in similar sized pieces, about four or five of them, and drop it through the lid’s hole one by one. Switch the machine off after a minute. 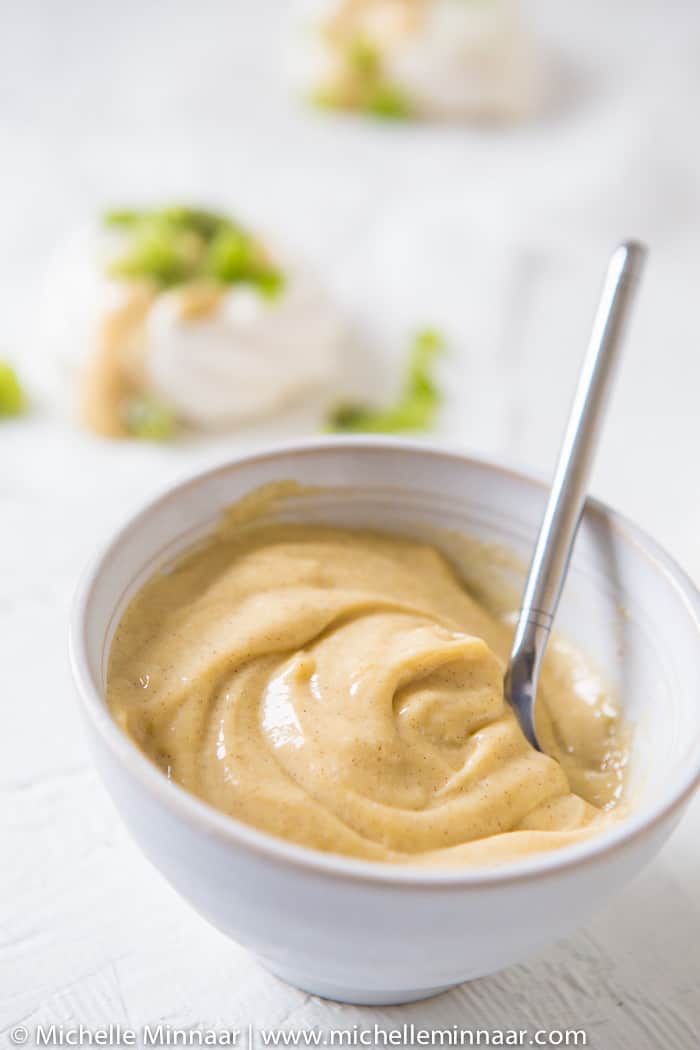 It really is as easy as that. You can pour it in sterilised jars – more information here – or simply place it in a bowl like I did and chill it in the fridge. We all know it won’t last more than a day or two in the fridge. 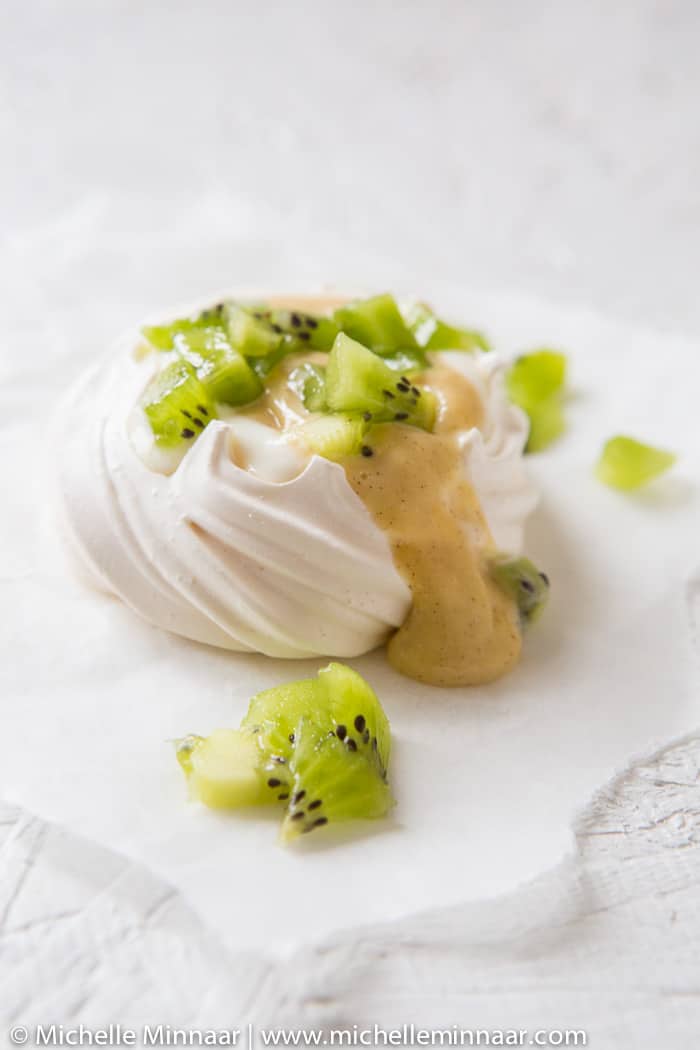 The kiwi’s black seeds were completely pulverised and who knew inside they were tinged slightly red. You would have thought the curd should be green but the egg yolks and butter reigned in colour and the kiwi’s pigment simply isn’t strong enough. If you find other recipes on the web and the photos show a green preserve, rest assured in knowing food colouring was used. We don’t want any chemical nasties in our food, do we? 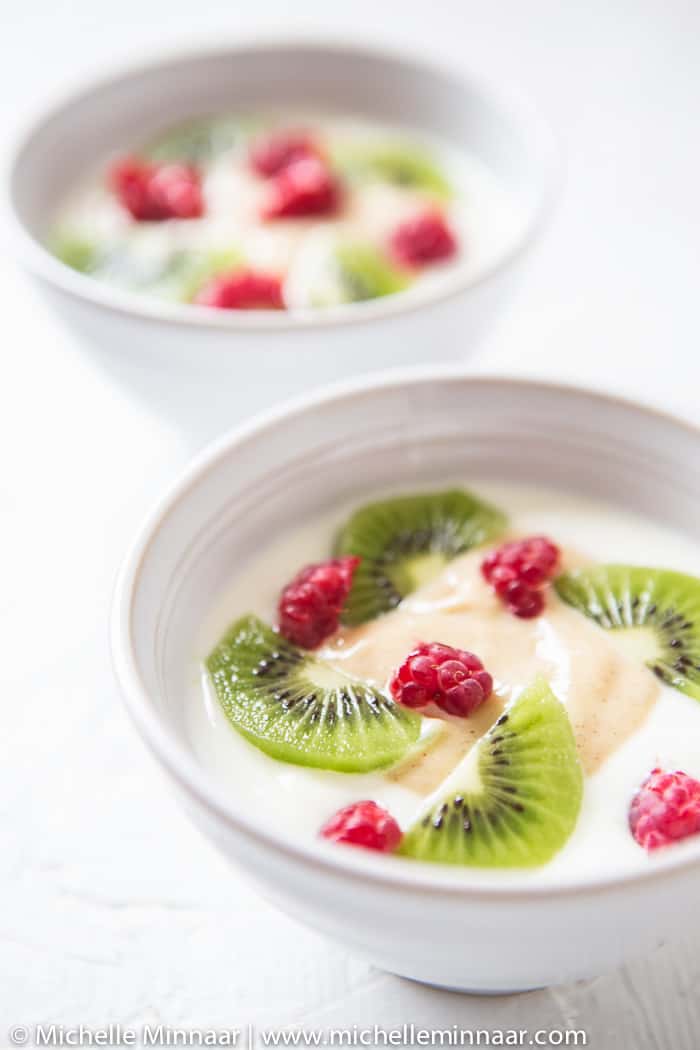 The leftover egg white can be used to make meringue and with some spare kiwis you can make mini pavlovas like I did here. You can make your breakfast a bit naughty by having plain yogurt, fresh fruit and a dollop of kiwi curd. It can be used as a cake filling, in bread and butter pudding, or if all else fails, have it on a slice of bread. My guilty secret is eating it straight with a spoon. Oh, and the taste? Divine!

Make More Of Your Own Preserves At Home

More Fruit Curds on the Web

P.S. This is a sponsored post for Fruitdrop. The Optimum 9400 was gratefully received from Froothie.