×
You are here: Home / Cooking Times / a) 30 mins or less / Blackberry Compote
Jump to Recipe 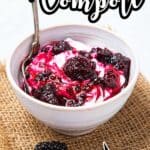 If you want the perfect topping for breakfast dishes and desserts, here’s something special for you. Blackberry compote is so simple to make and tastes absolutely divine.

A fruit compote – strawberry and raspberry are also great – is the perfect way to use up all the berries during summer. Frozen berries work too, so you can make this fruity mix all year round.

Products you’ll need for this recipe

One of the quickest, easiest and tastiest fruit recipes you’ll ever make, blackberry compote is simply delicious.

It can be enjoyed warm or cold and goes well with lots of different dishes, from ice cream and pancakes to yoghurt and granola.

It only takes around 20 minutes to make, from start to finish. So, give this blackberry compote recipe a go!

Extra ingredients you can use

What’s best for a compote: fresh or frozen blackberries?

Fresh blackberries get best results. During the summer, it’s the season for blackberries. So, find the best spots for picking and you’ll have so many blackberries you won’t know what to do with them.

Of course, frozen blackberries work great too and mean you can make compotes all year round.

Compote is a thick sauce made of whole pieces of fruit, cooked in sugar syrup and spices with a squeeze of lemon juice. It originated in France and was traditionally served as a snack with sour cream and biscuits.

What is compote used for?

Compote is a great way to use up all the berries during summer. It is normally served as a topping on many different types of sweet dishes and can be easily stored.

Where does the word ‘compote’ come from?

‘Compote’ is French for ‘mixture’. Beyond that, it comes from the Latin word ‘compositus’, also meaning mixture.

How do you pronounce ‘compote’?

Lots of people get confused when wondering how to say compote. It’s pronounced com-pot.

What’s the difference between jam and compote?

Both compote and jam are made using pieces of fruit simmered in their own juice and sugar until thickened.

Compote is usually cooked with other ingredients, such as spices and lemon juice, while jam is normally cooked with just sugar. They normally take around the same time to make – about 20 minutes.

What goes well with compote?

How long does compote last?

You can store compote in an airtight container and keep it in the fridge for up to two weeks because the lemon juice helps to preserve it. Once opened, it’ll last for 4 days.

Can you freeze compote?

If you want to keep blackberry compote for longer, you can place it in freezable storage jars and keep it for up to six months.

Blackberry compote comprises blackberries that have been cooked in sugar and lemon juice. This easy recipe is best served with yogurt for breakfast.