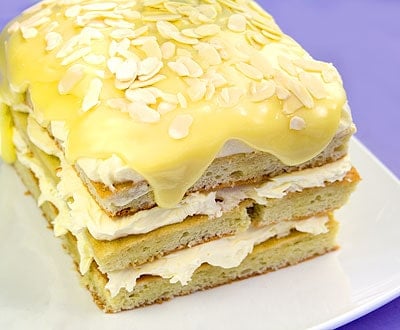 Sometime last year while browsing some food blogs I came across The Daring Bakers. Like some secret cult their website is closed to non-members and after some digging for info (to no avail) I decided to join them. The curious kid in me just had to know what they were all about and I sorely hoped that the initiation process won’t be too painful.

After joining, I finally found out the truth. One recipe a month is decided upon and is then baked by all members. All members’ creations are then revealed on a decided date. Fair enough, I thought, pulling up my sleeves, it surely can’t be difficult; the “Daring” word in the group’s name is probably just to flatter themselves.

How wrong I was. Completely underestimating the first recipe, which was one of Dorie Greenspan’s cakes, came out as a total flop. Hmpf. I still don’t know what went wrong, but it popped my confidence balloon, which now lay on the floor resembling a shrivelled condom.

The following month’s challenge I decided to give a miss. Frozen cheesecake lollipops, what?!?! After seeing the beautiful, artsy decorations the bloggers came up with I was green with envy. I really should have tried making them. Hmpf. I told myself that next time I was going to kick some ass.

On the first of May I eagerly checked out the next recipe. After making up new swear words I was seriously contemplating running away from the mess I got myself into. A cake with 5 elements? Why can’t it just be sponge and butter cream? It’s all going to end up in gooey-masticated mess in people’s stomach anyway. Plus, I’m on a diet; I can’t afford to eat such luxuriously creamy things.

After a few days I decided to give it a whirl. The reason I joined this group was to learn to bake and this was the ideal opportunity to practise. Then the baking began…

**** This is the scary part, people. Don’t stop reading now. You have to truly appreciate the length of the recipe and see what I had to go through! **** 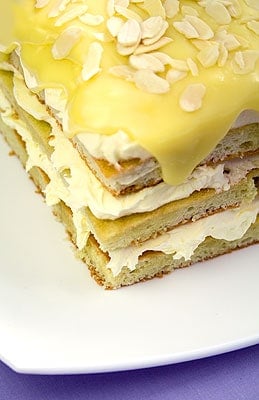 With all the warnings in brackets next to the steps, I was pretty paranoid. What if I overdid it with the stirring? What if this is a flop again? Argh. Since I’ve never folded in my life, the mixture ended up with blotches of white in it, which were the whisked egg whites. After ages of folding slowly I was scared that I was going to push all the air out of the light mixture and end up with two heavy bricks, so I stopped before the egg was properly mixed in and stuffed the concoction in the oven anyway. As I was waiting for the sponge to rise I started debating with myself whether I should have folded further. When I realised there was nothing else I could do, I started praying to the baking gods that the sponge will come out okay. They already played a cruel little joke on me the first time round. Amazingly, when I dared to peek in the oven a few minutes later, the sponges looked normal, you know, the way they should, without any white blotches. It seemed like the gods listened to my pep talk and decided to toy with other bakers instead. Great! Now on to the syrup.

Hmmmm. The syrup doesn’t have the consistency of syrup; more like sweet brown water with a hint of bitterness from the vanilla. Whatever, it’s good enough for jazz.

There was an alternative to the butter cream listed, which I made instead, but it was rubbish. I didn’t wait long enough for the sugar to melt and instead ended up with crunchy sugar that boiled and ended up forming hard clumps that sploshed like stones into the egg mixture. Needless to say it was a crunchy butter cream; no mater how long I let the mixer go at it. I decided against using it in my cake and luckily had enough unsalted butter left to make a new batch, but made it differently this time. Added more butter than the recipe stated though. Right, let’s carry on.

White chocolate isn’t as easy to melt as dark chocolate. I waited ages for the pieces to melt and a few minutes later I sat with a coagulated white mass with yellow oil drifting on top. It was time for a little intervention. The oil was drained from the glass bowl and more cream added and slowly but surely it all blended in one sweet, smooth sauce. Just perfect. The rest was easy peasy.

By this time it was 8 hours since I started making this cake when I started to assemble it. Yikes, I trimmed too much off the edges of the sponge, but it was still a very reasonable sized cake. Afterwards I put it in the fridge and added the glaze the following day.

Yet again the white chocolate separated from its “oil” and the cream saved it again. Weird stuff. Poured on the glaze, sprinkled it with slivered almonds and chilled it.

There was so much cake; I had to take some to the neighbours, which suddenly made me very popular. It tasted quite good as far as cakes go, but if you wonder if I’ll ever make it again the answer is hell no! The kitchen was a disaster area afterwards and it took a few days to clean up bit by bit.

Opéra cake is a French recipe comprising layers of lemon sponge, white chocolate mousse, buttercream and glaze. It tastes like pure heaven in your mouth!

Equipment you’ll need for the joconde:

Ingredients for the joconde:

What you’ll need for the syrup:

Ingredients for the syrup:

What you’ll need for the buttercream:

Ingredients for the buttercream:

What you’ll need for the white chocolate mousse:

Ingredients for the white chocolate mousse:

What you’ll need for the glaze:

Ingredients for the glaze: