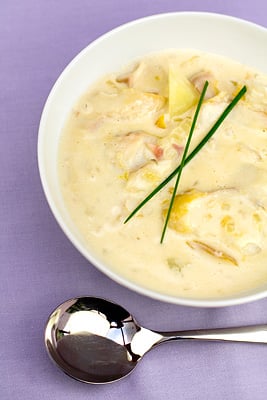 Are you guys still on a diet? If you were on the virtuous road of healthy eating the last few days, watch out, because I’m about to kick you off the wagon to join the rest of us blissfully ignorant, hedonistic eaters.

My relationship with the phenomenon known as chowder has been a rocky ride. The first time I tried one was when I was 13 years old. It was at a Capetonian restaurant (which has thankfully closed in the meantime) where I ordered Sweet Corn Chowder. That night I was seriously ill. I’ll spare you the gory details but needless to say since then I’ve avoided the dish like the plague.

Fast forward 14 years. (Did I just divulge my age??) Last year Neil, Gabriel and I went on a road trip through Ireland. On the last day we found ourselves back in Kilmore Quay, with hours to dawdle before the ferry left for Fishguard from Rosslare. For lunch we went to the only open restaurant, Le Poisson D’or, in the village. That awful word “chowder” appeared on the menu but strangely enough the thought of it didn’t repulse me anymore. Some call it intuition and others will just say I took a calculated risk. We were overlooking the scenic harbour, the menu boasted that the freshest ingredients were used, the chef was French and the bubbly hostess raved about the chowder and I believed her.

You know there’s a time and place to try new things. When you go to a steakhouse, it is pretty idiotic to order fish, isn’t it? After all, the restaurant’s speciality is meat. Vice versa for a fish place. It would also be best to steer clear of the soufflé item on the road diner’s menu because surely it will excel in serving you eggs, bacon and beans. If I wasn’t going to get a proper seafood chowder from a restaurant who claims to specialise in fish, then it simply meant chowder and I were incompatible; there would be no happy ending where we walk hand-in-hand, or should I say spoon-in-mouth together into the sunset.

The chowder came. It was pretty damn good. It was the best I could have hoped for. I can’t remember the last time I tasted seafood as fresh. Every mouthful was creamy and melt-in-the-mouth special. Unfortunately, it ran out too soon but I was so happy I tried it!

After experimenting in the kitchen, here is a cheaper version.

So tell me, have you overcome any food fears lately? 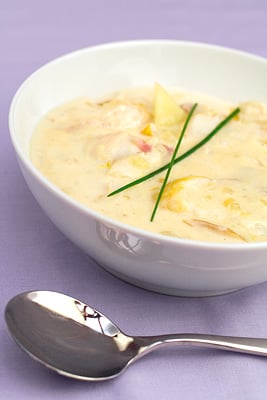