You are here: Home / Cooking Times / a) 30 mins or less / Asparagus wrapped in Parma Ham
Jump to Recipe

The first time I’ve come across asparagus wrapped in Parma ham was during a friend’s garden party. Nowadays, people would call it a barbecue, I guess. Anyways, this was years ago. She made a lot of party food to keep us entertained. You know, the type of food you can eat in one bite and goes great with a pint. Asparagus wrapped in Parma ham caught my attention as the crisp flavour beautifully complements the salty and smoky Parma ham. Once you start with one, it’s really difficult to stop. Just grab two or three when no one is looking! Did I mention it takes under ten minutes to prepare it? Enjoy! 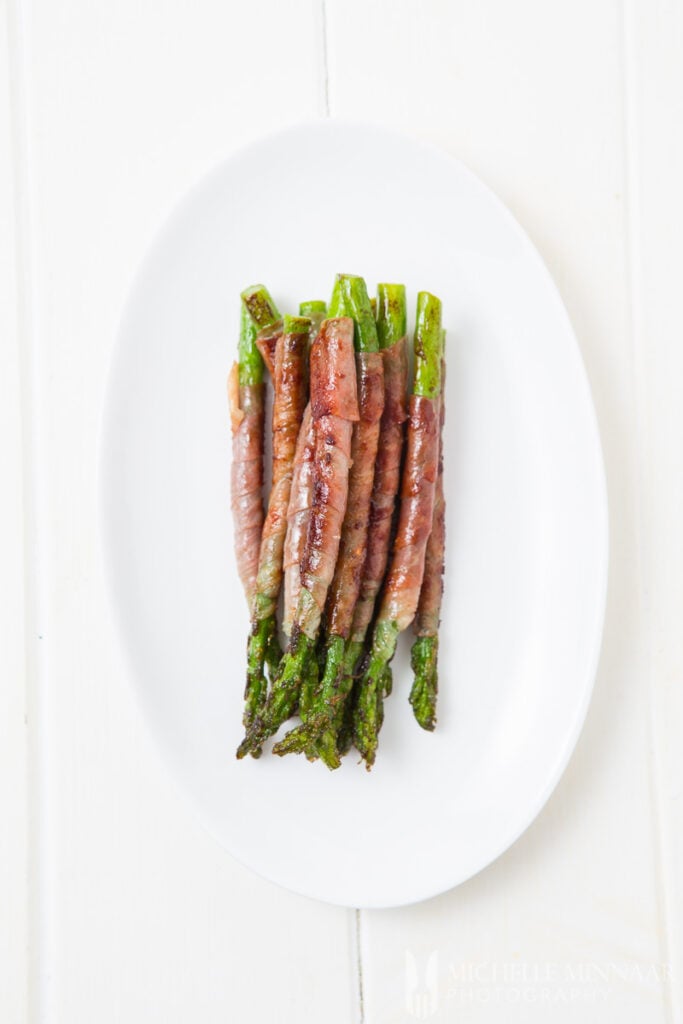 Parma ham, or otherwise called, Proscuitto di Parma originated from the year 100 B.C. Obviously, it got its name after the town called Parma. It’s a mid-sized town, located just below Milano in northern Italy. Back in the day, the ham was air cured and topped off with oil. The oil would preserve the ham and it could go on without spoiling for ages. Furthermore, it is a common practice to dip the ham in a salty cure. That’s how we get our delicious Parma ham. It’s more complicated and ancient than it appears!

Do you have any favourites? Simply using bacon will also do the trick as a substitute for the asparagus wrapped in Parma ham recipe. We all love the salty and crispy texture of the bacon, once fried. The bacon will give off a lot of grease and leave a beautiful crisp on the outside once grilled. If you are a fan of bacon you should try Koto Bacon. 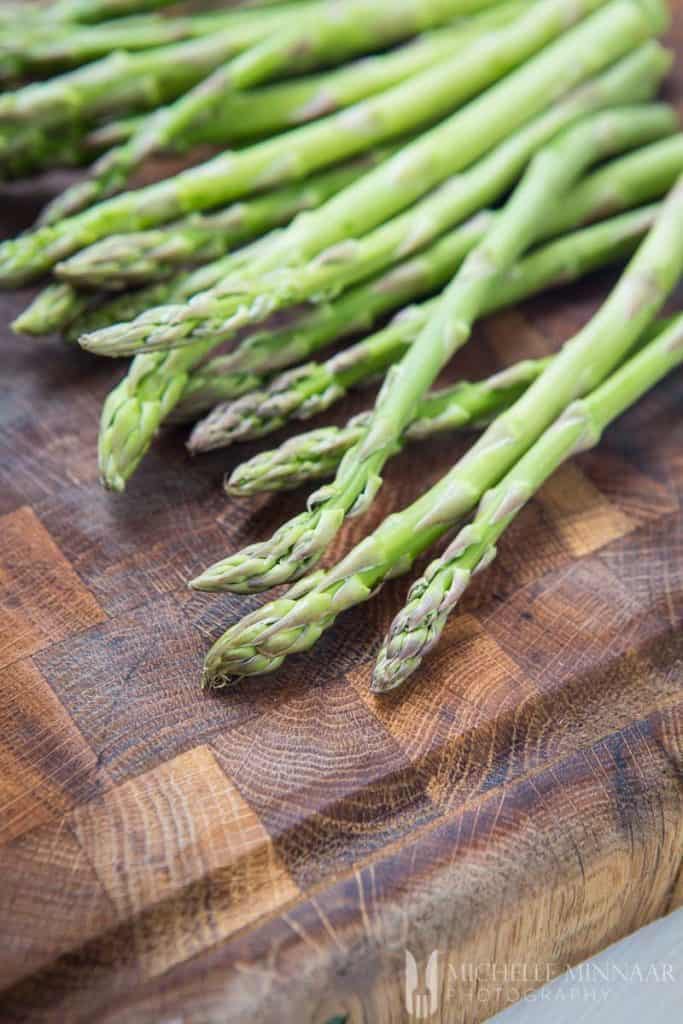 This beautiful spring vegetable is the hero of this recipe. Egyptians grew asparagus all the way back in 3000 B.C. They are famous for having an almost woody, nutty flavour. Furthermore, they are crispy if not cooked well enough. They are also low in calories and are an excellent addition to any main course. Traditionally, people go for the green asparagus. Did you know that you can also get white asparagus? The difference between the two is how they grow. The white asparagus doesn’t develop any chlorophyll as it’s grown in the darkness or shadier climates. In my opinion, the white asparagus is creamier and smoother. In any case, you can use both types for this recipe.

Asparagus is a very common vegetable that people like to grow in their gardens. There is nothing better than freshly grown young asparagus. Simply plant asparagus seeds in the spring. If you want your asparagus to have a greener colour, plant it in a place so it’s more exposed to the sun. Be aware, that it takes two years before you harvest your first asparagus. Harvest season is usually in late spring. Take a sharp knife and cut! Imagine serving your own asparagus for the asparagus wrapped in Parma ham recipe. That’s something to brag about! 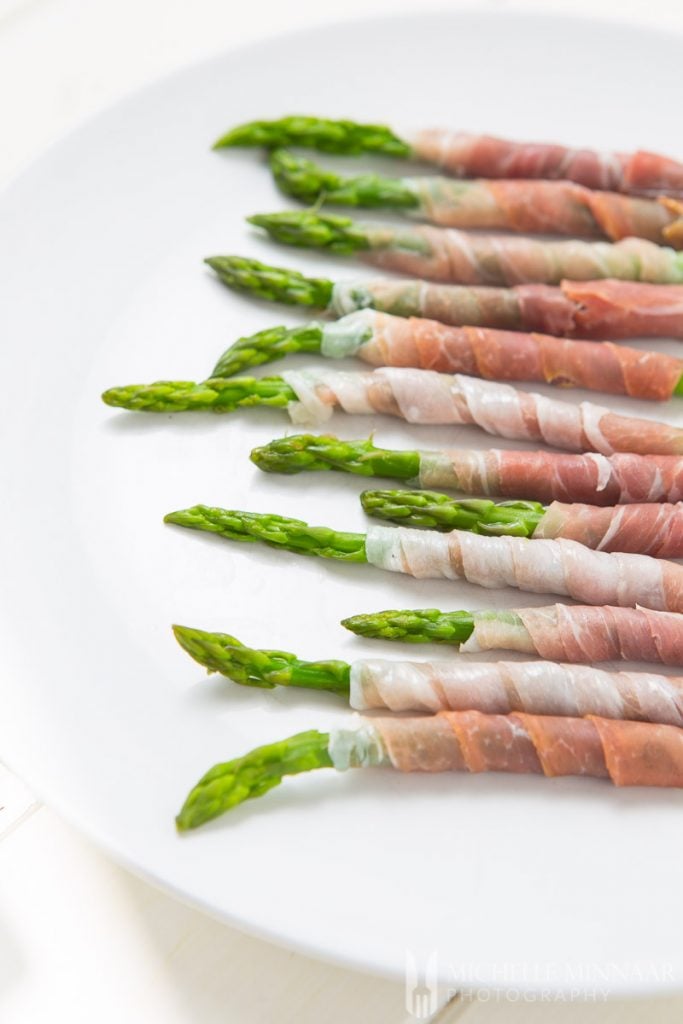 I usually go for sweeter substitutes, as I think it goes really well with the salty nature of the Parma ham. Why don’t you try figs instead of the asparagus wrapped in Parma ham. The honey sweet flavours of the figs will make you an addict. You can also use:

Obviously, you can make this dish healthier if you substitute with other veggies. Nonetheless, I believe that there is nothing better than the asparagus wrapped in Parma ham, unless it’s substitutes by something sweet. 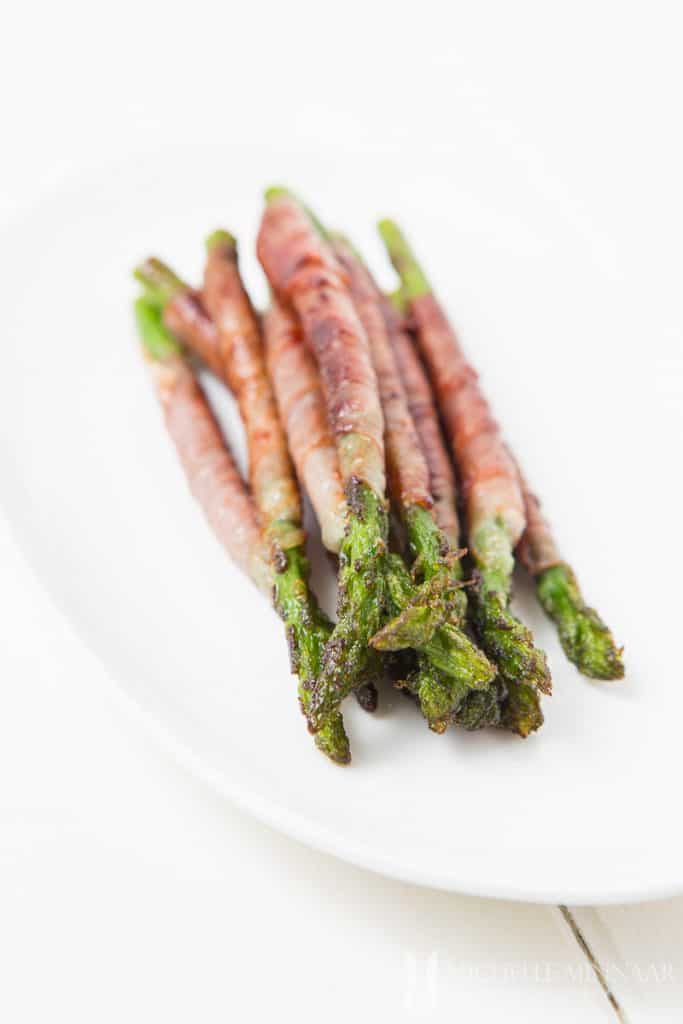 Instead of making asparagus wrapped in Parma ham, you can wrap it in dough. However, this limits you to oven-baking. It’s very difficult to do it on an open grill as the dough will just stick or melt off. You can also try putting cheese in between the asparagus and the Parma ham. It adds a beautiful creamy texture. Or try it in a salad!