×
You are here: Home / Recipes by Dish / Casserole / Vegan Moussaka
Jump to Recipe 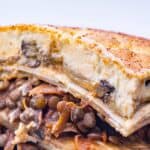 Want to make a mouth watering meat-free dish? When it comes to tickling your tastebuds, this vegan moussaka recipe will do it like no other vegan recipe you’ve ever come across.

It’s a labour of love. Layers of luscious ingredients, all working together in harmony, add up to a dish that will take your breath away. With this vegan moussaka, it’ll be once tasted never forgotten!

The secret to getting perfect layers for this vegan moussaka? Well, if you’re fed up with carb-heavy pasta dishes, then here’s the perfect kitchen gizmo for you.

I got my hands on a SpiraSlice – a compact like kitchen gadget that helps you to get creative in the kitchen.

Three interchangeable blades mean you can produce sheets, ribbons or spirals in an instant. This thing is going to totally transform the way you prepare meals!

Think about all those delicious pasta dishes that make you feel like a ten-tonne truck after you’ve eaten them. Well, simply replace the pasta with vegetable sheets, ribbons or spirals made using a SpiraSlice. It’s so incredibly easy to use and produces food that looks great!

Cleaning up is simple too. The SpiraSlice can be put together and taken apart with ease and all parts are safe to clean in the dishwasher. As kitchen gadgets go, it really doesn’t get much more straightforward than this.

For this recipe, you’ll need to use the slice function of the SpiraSlice to create perfect sheets of celeriac and potato. Try it once and you’ll realise just how easy it is!

You can also use courgette in the SpiraSlice – check out my amazing garlic and chilli courgetti recipe – as well as many other healthy vegetables.

How to make a vegan moussaka

While the aubergine is roasting in the oven, you’ll make the lentil filling – the essence of this vegan moussaka where all the flavour will be. It’s important to get this to taste out of this world, so you’ll need to follow my recipe precisely.

The ingredients for the lentil filling include puy lentils, passata (or chopped tomatoes if you prefer), carrot and onion (finely chopped) garlic, oregano, paprika, cinnamon, red wine (or beetroot juice) and tomato puree (you can use tomato sauce if you prefer).

Follow the instructions below to cook the filling to perfection. Use the SpiraSlice to create slices of celeriac and potato. These are going to be essential for creating that layered effect for your vegan moussaka.

You’ll need to blanch them in a pan of salted water before using them to layer up the baking tray.

Next, comes the béchamel sauce. Unlike regular old béchamel, this recipe uses cashews to create a deliciously healthy vegan white sauce. You’re going to love it!

It’s easy to make as well. Simply cover the cashews in boiling water for 15 minutes. Then add the other ingredients in the recipe, including plant-based milk, yeast and vegan cheese, and whizz it all up in a blender. Add a pinch of nutmeg if you like, then you’re good to go!

Layering your vegan moussaka in the baking dish is one of the fun parts of this recipe. After you’ve all the prep time you’ve put in, the layering is the part where everything comes together.

Thanks to your SpiraSlice, you’ll have sheets of three different types of vegetables. After placing a thin layer of lentil filling on the bottom of the baking dish, place a layer of potato, followed by celeriac and then aubergine.

Add another layer of lentils and then the vegetable sheets and repeat until there’s about 1 inch left on the top of the baking dish.

Then add your delicious vegan white sauce, with an extra sprinkle of nutmeg on top.

What is vegan moussaka?

Vegan moussaka is a vegan twist on a traditional Greek dish. With a standard moussaka, you would typically use aubergine sheets in between a ragu sauce made from ground meat mince – normally lamb or beef. Then, a white sauce is spooned on top.

A vegan moussaka omits the ground meat, instead using a ragu made from Quorn, tofu or, in this case, lentils. For me, lentils are the ingredient that will give you that extra bit of flavour that will make an irresistible moussaka. Vegan or otherwise, you’re going to love it!

Where does moussaka come from?

Moussaka is most associated in Greek cuisine. However, it’s also very popular in the Middle East.

In fact, legend has it that moussaka was introduced to the Greeks by the Arabs when they brought aubergines to the Mediterranean.

One thing that we know for sure is that Greek chef Nikos Tselementes invented the modern version of moussaka. Hugely influenced by French cuisine, he added white sauce to the dish to give it an extra richness.

So, much like the dish itself, the origin story is a layered one. Like all the best works of art, moussaka has influences from several different cultures. Add the vegan twist and you’ve got another layer to the story. 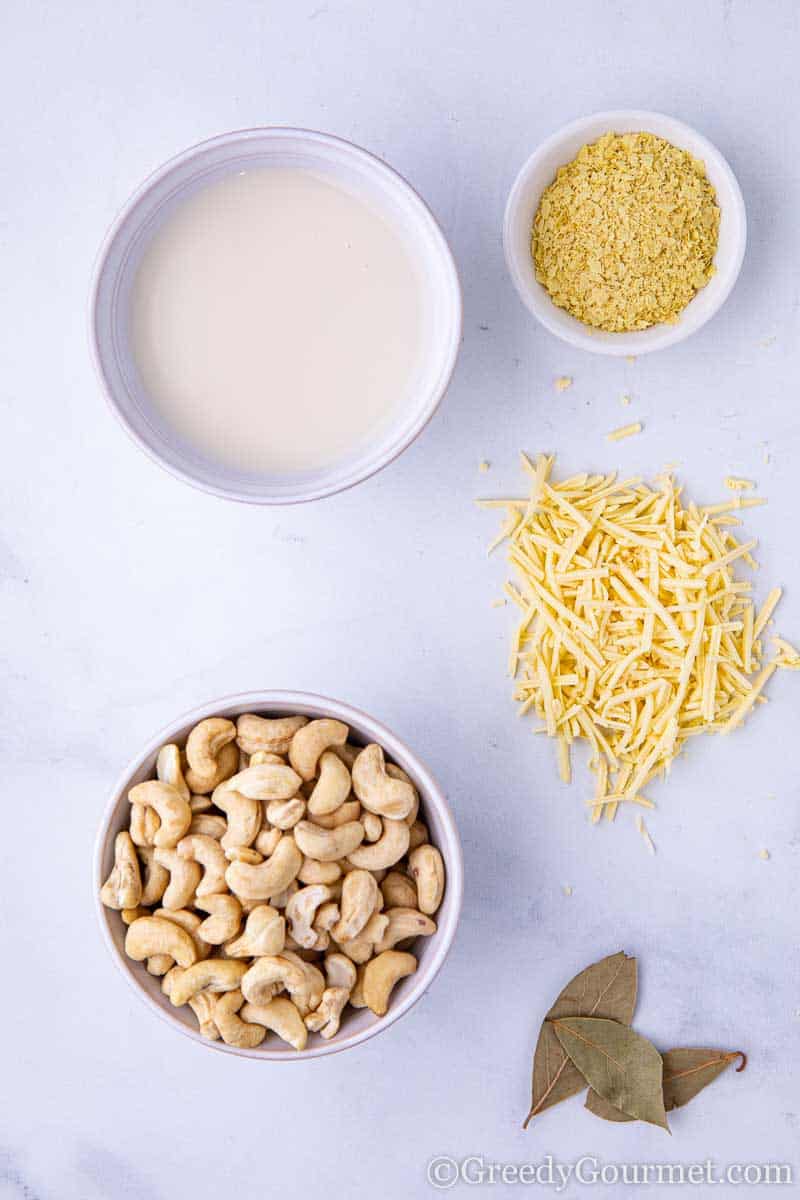 Not only is this moussaka recipe completely vegan, it’s also 100% gluten free.

So, the next time somebody says that gluten free, dairy free vegan food is tasteless, put a plateful of this vegan moussaka in front of them and watch them do a 180º flip with just one mouthful!

There are lots of different types of plant-based milks you could use to make the vegan bechamel sauce. Anything from oat milk, rice milk, soy milk or even almond would work fine.

What are the best lentils for vegan moussaka? 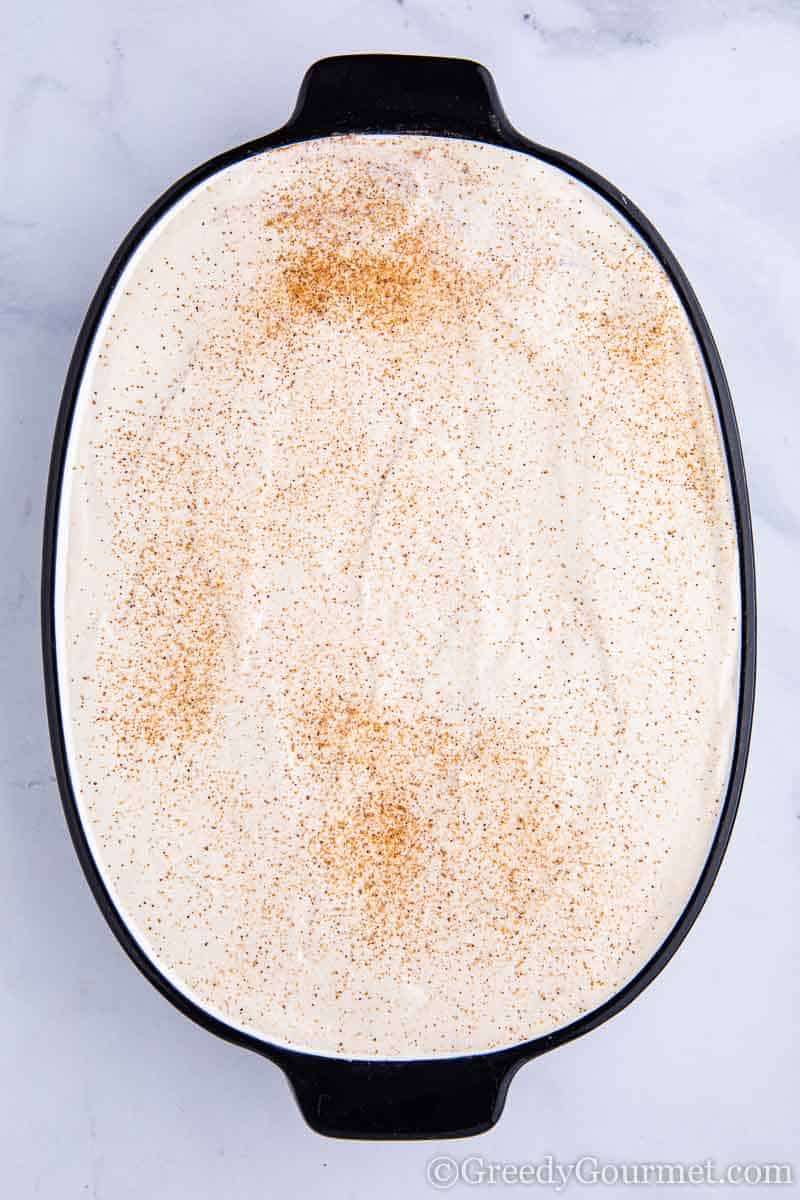 This recipe calls for puy lentils to be used. Puy lentils are a special type of lentil grown in the Le Puy region in central France. The soil these lentils are grown in is volcanic, which lends them a rich, peppery flavour.

What are the best herbs and spices to use in a vegan moussaka?

For this recipe, I’ve gone for oregano as the herb of choice. You could also use thyme, basil, rosemary and you can even add a bay leaf to the ragu.

In terms of spice, you want something with a touch of smokiness. For me, a pinch of paprika works wonders, as well as a little bit of cinnamon to bring a little sweetness.

You could also add a teaspoon of cayenne pepper to the lentils instead, which will give you a delicious little kick.

Finally, you can also sprinkle a teaspoon of nutmeg into your béchamel for a tasty earthiness.

What other vegetables can be used to make layers in this recipe? 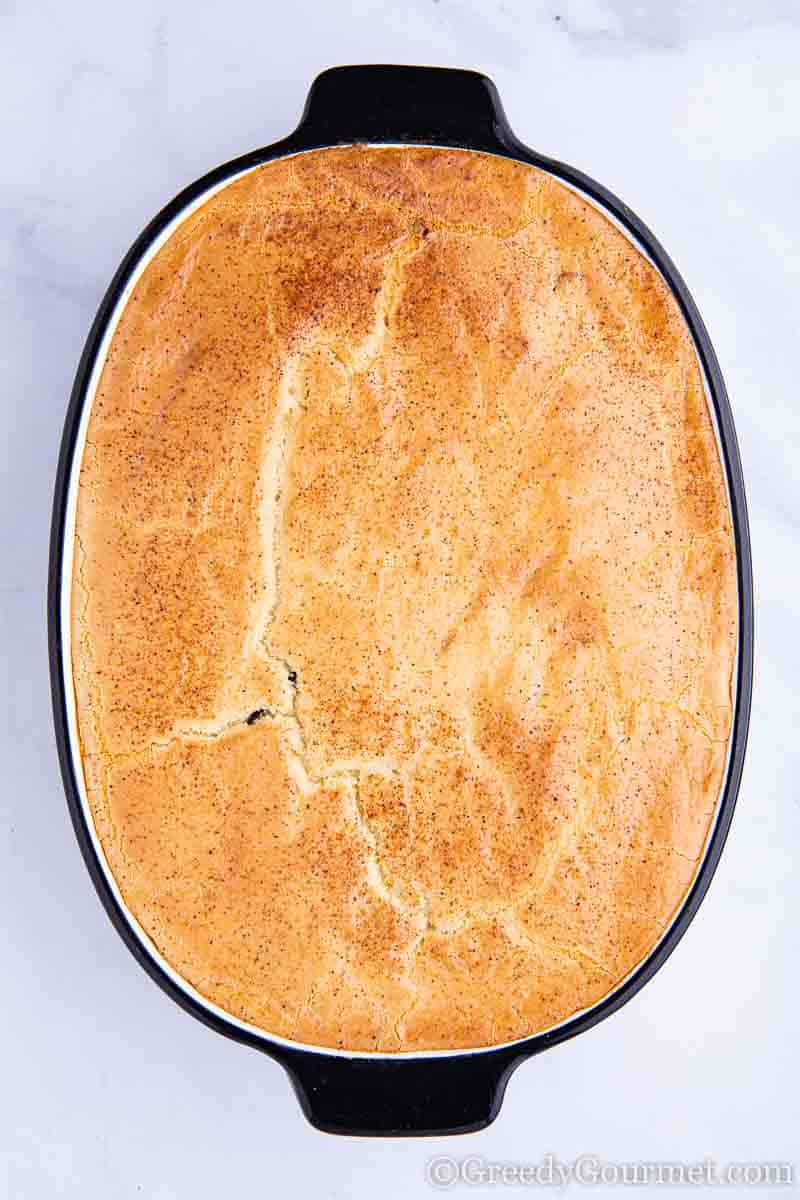 If you want to make this recipe using other vegetables, you can. Why not try sweet potato, courgette, marrow or butternut squash?

How long does vegan moussaka last in the fridge?

If you and your family don’t manage to devour this moussaka in one sitting, don’t worry. It’ll keep for between 4-5 days in an airtight container in the fridge.

Can you freeze vegan moussaka?

Yes, you can freeze vegan moussaka! Again, just place it in an airtight, freezable container and keep it in the fridge for up to 2 months. When you want to reheat it, defrost it in the fridge overnight and heat in the oven at 160ºC for 20-25 minutes.

Once you’ve mastered this vegan moussaka, check out some of my other mouthwatering vegan main meals:

This Vegan Moussaka comprises layers of tomatoey lentils, grilled aubergine slices, sheets of potato and celeriac, topped with vegan béchamel sauce. This recipe uses only natural ingredients and is gluten and dairy-free!