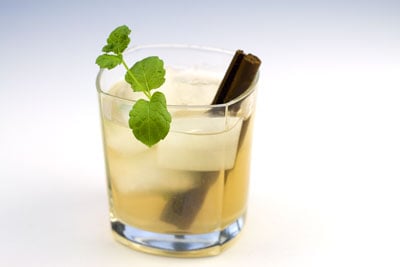 This drink is a refreshing alternative to the real sap if you don’t have a juice extractor. As you simmer the apples their flavour and sweetness flow into the hot water and what you’re left with is the pure essence of apple.

Since raw apple is too acidic for a baby I thought it would be interesting to let Gabriel try a bit of this infusion. At first he just shoved his weaning cup away, thinking it contained water. After having his lunch, he built up a thirst and again I presented the cup to him. With little enthusiasm for my offering he took a sip. In a few seconds his eyes were as huge as saucers and his hands clenched the handles, fear stepping in that I will take this great tasting water away from him. For the next few minutes all you could hear was slurps and gurgles.

The next day the apple drink was obviously finished and as usual I filled his cup with water. The sight of his blue cup made Gabriel go absolutely berserk; arms and legs flailing, anything to bring the cup closer. Immediately after the first sip he screwed up his face, he tasted a bit again. Then he clicked. Slowly he put the cup down and looked at me with great disgust as if to say: “What did you do?”. Who knew babies could be so entertaining?

P.S. This drink will be served at Stephanie’s Blog Party. It will also join Sunita‘s monthly event, called Think Spice. 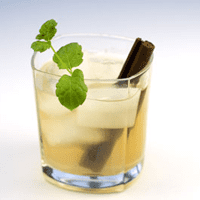