There is nothing better than taking a bite from a warm, fresh and crunchy falafel. Mung bean falafel is an excellent way to serve something nutritious for your family. Plus, the making of the mung bean falafel can be lots of fun, especially if you’ve got kids, like me, at home. The best thing about this recipe is that it’s really versatile in terms of having the option to add eggs or flour. You don’t necessarily have to use them to bind the mung bean falafel mixture. That’s what the sweet potato is there for! Very suitable for vegans along with a Middle Eastern salad or the rainbow quinoa salad. 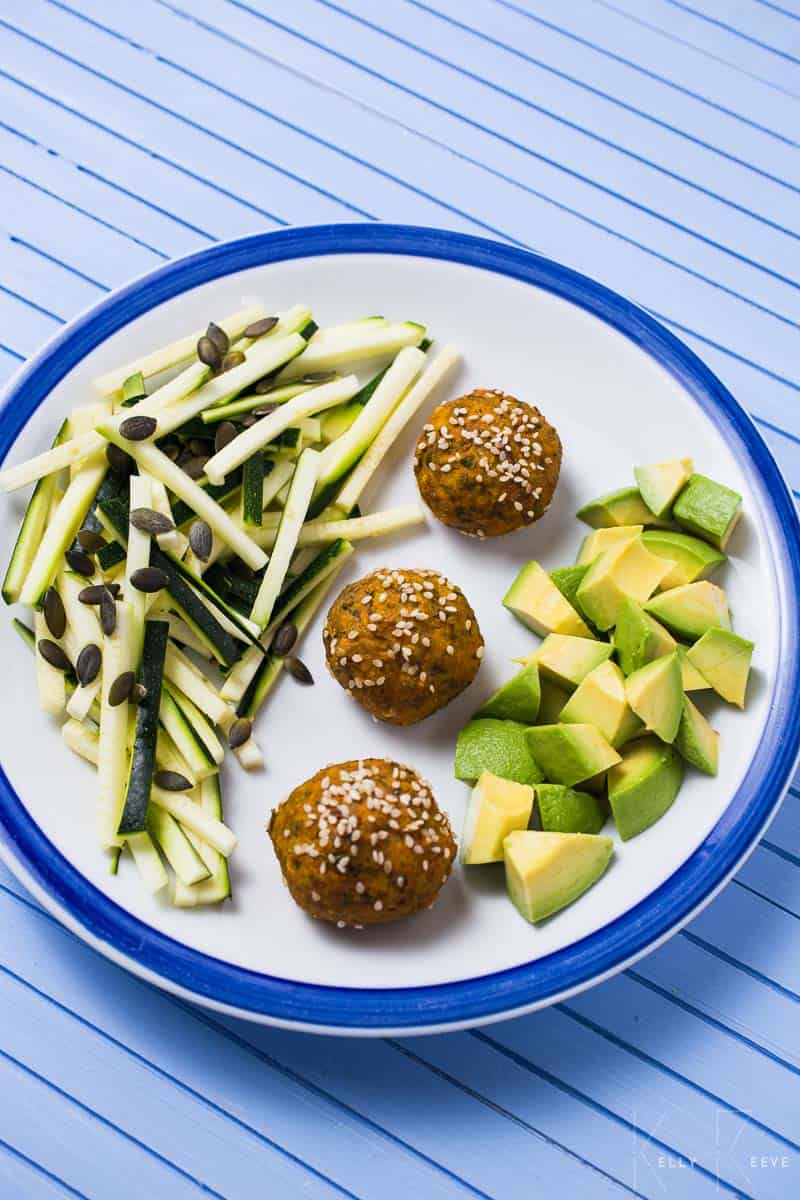 Falafel is made from a chickpea mixture, including a couple of the traditional Middle Eastern spices. Then, the way to cook the falafels is to roll them into small balls and deep fry them. Once golden brown, they are ready to serve. Falafel sounds very similar to the Arabic word mefelfel, which translates to spicy. Therefore, many people believe that the word falafel is derived from this Arabic word. Usually, in the Middle East you can find falafels on the street, along with some pita bread. 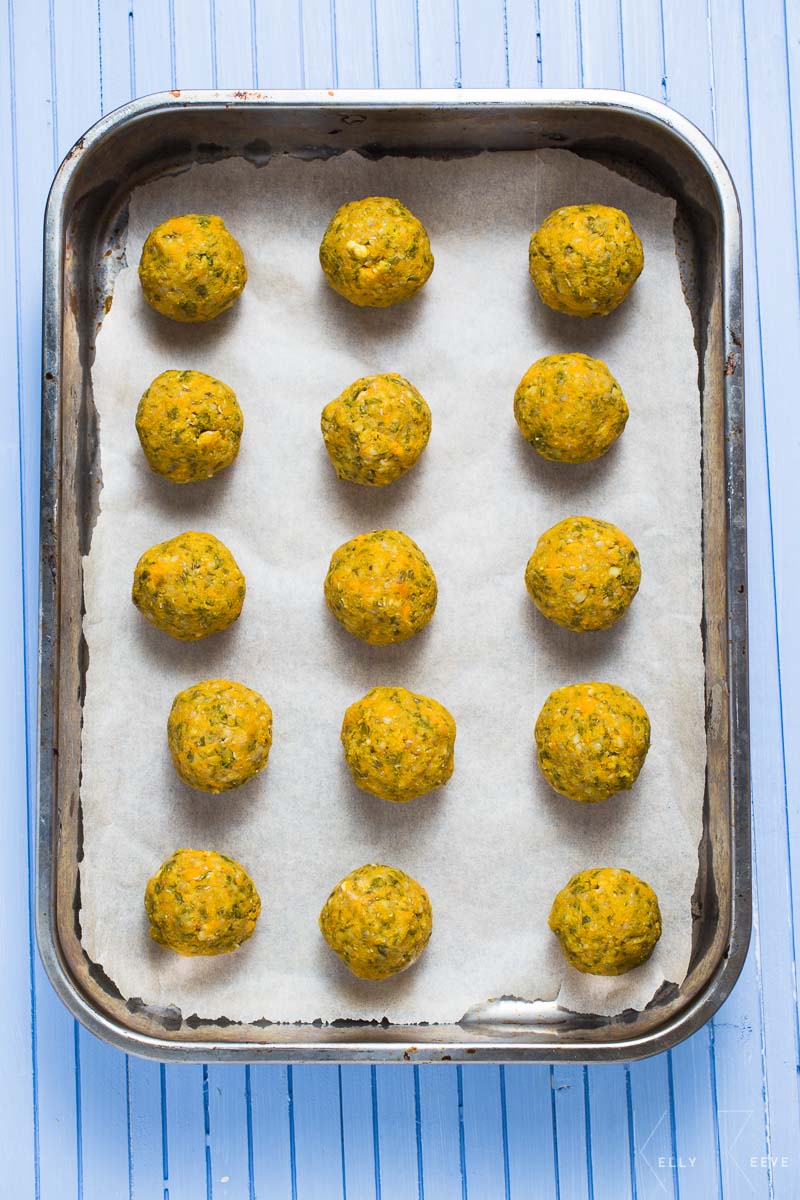 The history of falafel is quite complex as its origins are still unknown to this day! According to some historians, falafel made its first appearance in Alexandria, ancient Egypt. As Alexandria was an important port city back in the day, sailors usually ate falafel-like patties during their sailing trips. This is because chickpeas last longer than meat, thus conserving better for long sea trips. With all those sailors travelling, it eventually became popular throughout the Middle Eastern countries. Today, it’s a very common street food in the Middle East. Especially in Israel, being the national dish.

Fun fact! If you travel to Egypt, you’ll find that they use the original recipe for falafel, which includes fava beans. The other Middle Eastern countries use chickpeas. 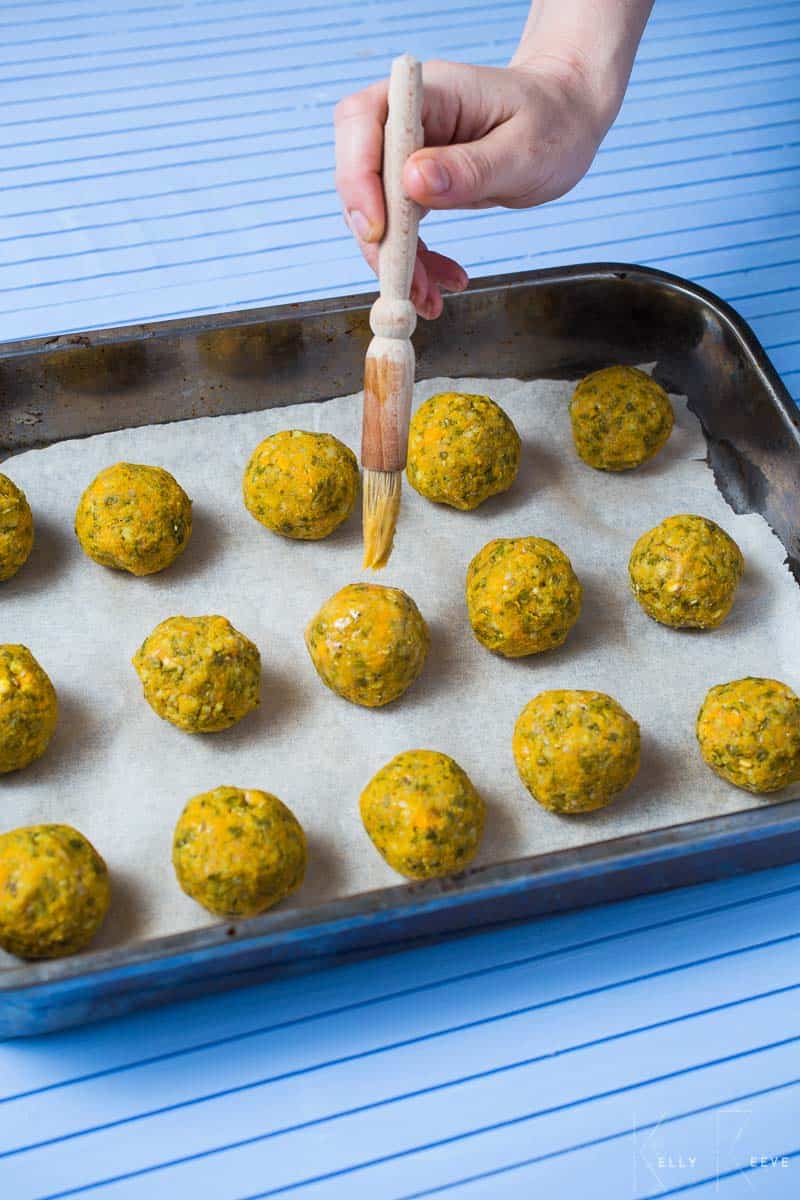 Mung beans are these small green beans – smaller than chickpeas. They have 25% less calories per 100 grams serving than chickpeas. Therefore, they are suitable for Weight Watchers dieters and diabetics. Mung beans contain less fat, less sugar and less carbohydrates in general. However, chickpeas are more nutritious in protein, iron and calcium. In terms of taste, mung beans need a bit of seasoning, but combined with sweet potato, they are perfectly balanced. Not to worry, the spices in this recipe give the mung bean falafel extra flavour that will take you on a journey to the Middle East. 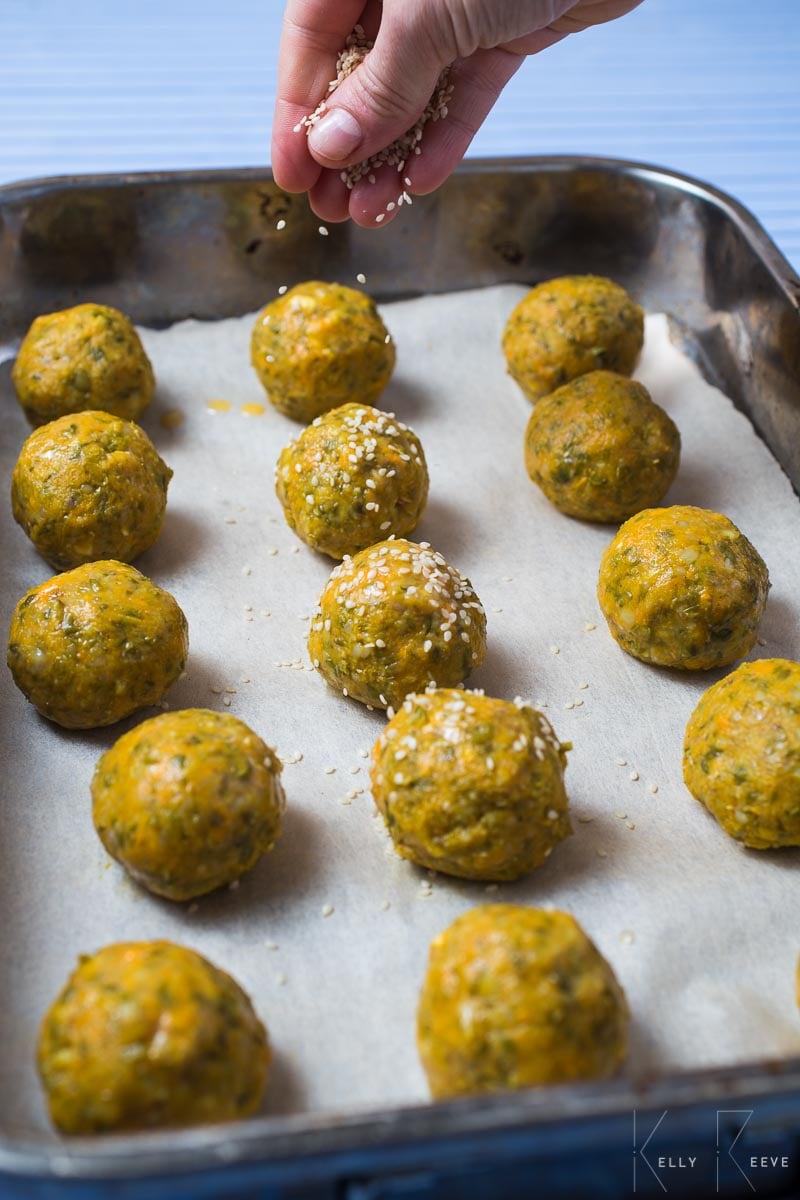 As mentioned before, you don’t have to add the flour or the egg into the mung bean falafel. Both are completely optional, so you can eat gluten-free and vegan! Besides, the flour is intended for making the consistency of the falafel mixture thicker, so it’s not a core ingredient. It’s an easy consistency regulator. If your mung bean falafel mixture is too sticky and want to stay vegan, simply add more walnuts.

Same goes with the egg. This recipe calls for glazing the mung bean falafels with whisked egg. This is done to give it a nice colour. If you don’t feel like using the egg, simply use oil. You’ll still achieve the same crunch from the deep-fryer. 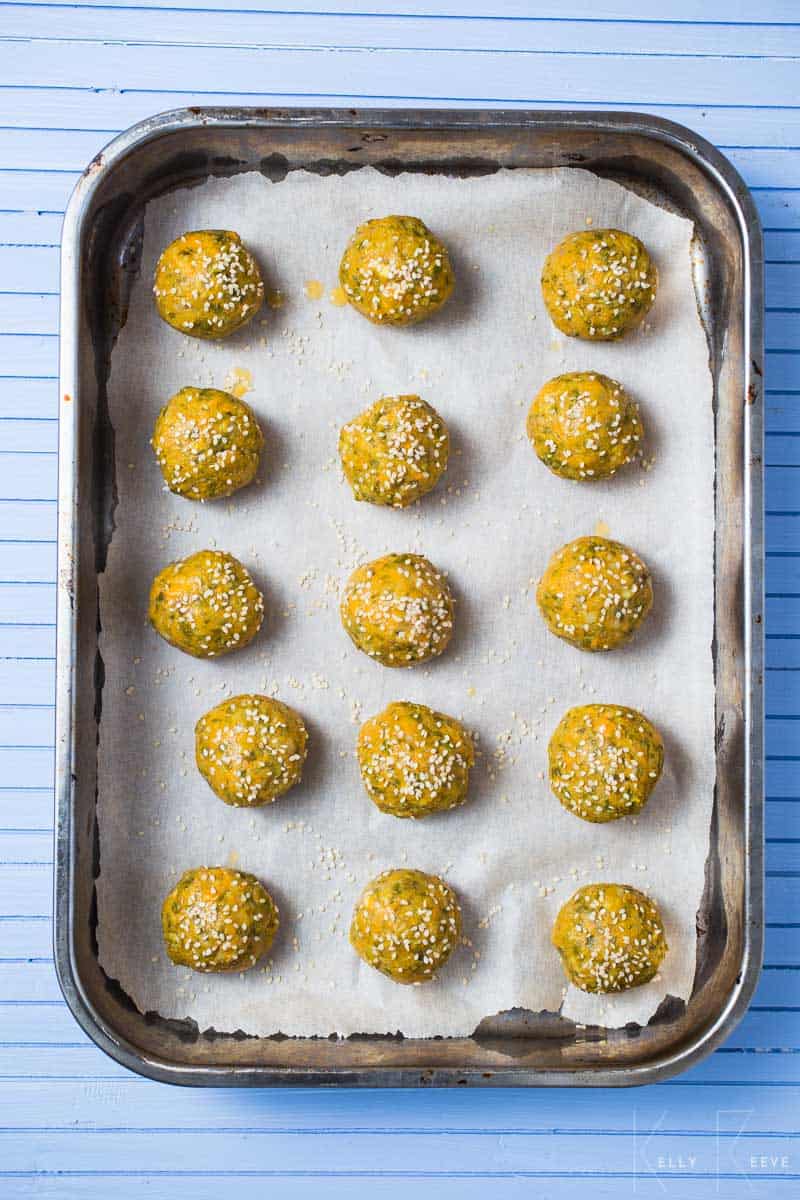 Let’s face it. Everything tastes incredible when it comes out of the deep fryer. Especially, if that something is double or triple-fried. If you are up for deep frying your mung bean falafel, then first make sure that your oil is the right temperature. The oil needs to be extra hot, so you get that nice crunch on the outer layer. You’ll need to leave it there, until the falafels turn golden brown. However, deep-frying doesn’t make the mung bean falafels any healthier.

If you want to avoid the high fat content from the deep-fryer, then oven bake the mung bean falafels. You won’t have that same result in terms of crunch, but it’s still pretty delicious. Besides, if you sprinkle your mung bean falafels with some sesame, then you’ll still have some crunch from the seeds.

When I eat the mung bean falafel with all the spices in it, you definitely get a sense of the Middle East. It got me thinking though. The chana tikki is very similar to the mung bean falafel, as it is a falafel itself. However, instead of chickpeas, there are mung beans. Plus, instead of Indian spices, there are Middle Eastern spices. Therefore, it left me wondering. Would serving Middle Eastern and Indian flavours be too much during a party? Let me know what you think! 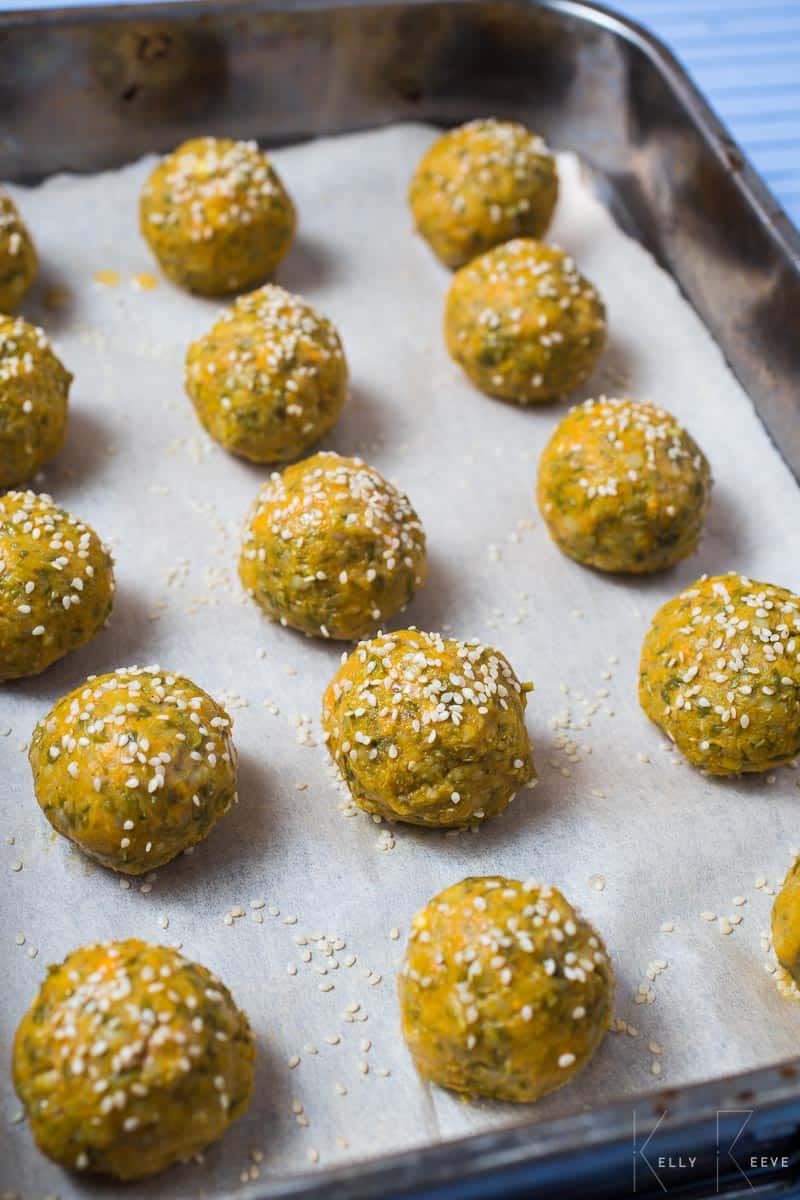 As you can see, I’ve julienned some raw courgettes with pumpkin seeds and cut up some fresh avocado. Even though the mung bean falafels are baked, they are quite dense, so it’s a great idea to serve them with something light and fresh. However, if you’d like to eat the mung bean falafel in a traditional way, you’ll need a couple of things.

First, you’ll need hummus (chickpea dip with olive oil) and some vegetables, like tomatoes and cucumber. You can make a mung bean falafel party platter. If you feel like eating the falafel all by yourself, then definitely get some pita bread. Put some hummus and some slices of cucumber, and you’re set for a lovely finger-licking good meal.

Lastly, you can also serve it with a traditional salad with some oil and balsamic vinegar. However, if you want to stick to the mung beans, then why don’t you serve the mung bean falafels with a delicious mung bean salad?

A special thanks to Kelly Reeve for assisting with the recipe shoot.