Have you ever heard of tin roof ice cream? As strange as the name sounds, it is quite a popular ice cream flavour. This type of ice cream is generally served in a cone, or as a topping on cakes and sundaes.

In fact, tin roof ice cream is said to have originated as a sundae, but we’ll get to its origins later. All in all, this tin roof ice cream has three major flavours running through it. First, it has a vanilla base. Secondly, a swirl of chocolate sauce runs through it. Lastly, it is topped with peanuts. Sometimes, the latter is chocolate covered peanuts for an extra chocolatey punch. Although a three flavoured ice cream might sound complex to make from scratch, it is not. Making tin roof ice cream is easy, because it has a simple vanilla with a sauce and topping added at the end.

If you’re making a tin roof ice cream for the first time, then you’re going to have tons of fun. The recipe involves a couple of steps at the end where you integrate different flavours and textures into the vanilla ice cream. Once you master this ice cream recipe, you’ll be able to master any multi-flavoured ice cream recipe. Dare to explore your ice cream making skills.

why is it called tin roof ice cream?

The origins of this ice cream recipe are uncertain. Nevertheless, one theory suggests that was first invented as a sundae. Consequently, they decided to name it tin roof because the business had a tin ceiling. Others argue that the name came from the neighbouring restaurant which had a tin roof ceiling. After that, the term tin roof stuck.

As this is an American dessert, some ice cream makers such as Blue Bell have released a commercial version of this ice cream. Although, I guarantee that store bought ice cream never tastes the same as home made ice cream. Feel free to compare and let me know. 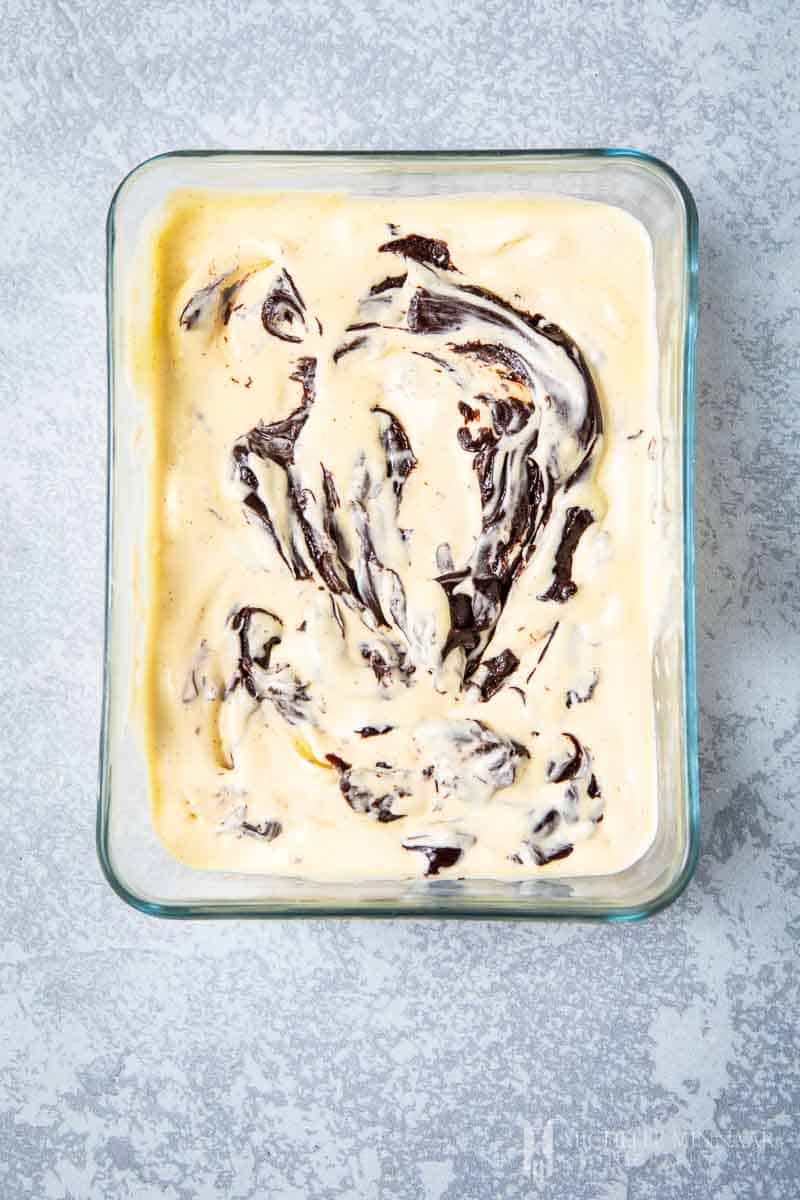 is there a tin roof sundae near me?

Since I live in the UK, the answer is a big fat no. Good job I know how to make it, and so can you!

Apparently, tin roof ice cream was invented as a sundae in an American diner. Have you ever made a sundae before?  You can make it yourself. No need to go anywhere. It consists of ice cream, syrup, whipped cream, sprinkles and other crunchy ingredients or fresh fruit. In the case of sundaes, the bigger, the better. If you haven’t made an ice cream sundae before, then follow these simple steps:

There are a couple of varieties of nuts you can use for this tin roof ice cream recipe. For instance, you can use any type of nuts – the best substitute being macademia nuts. They are sweet in flavour and have a soft bite to them.

However, if you’ve got a nut allergy to any type of nuts, you can completely skip this step. Instead of peanuts, there are other substitutes.

In either case, if you would like to inspire yourself with more toppings, consider these:

In fact, if you’ve got kids I recommend adding small marshmallows into the recipe. Either as a topping or directly into the ice cream maker when you make your ice cream. It will then resemble the infamous American ice cream classic, Rocky Road. Have you ever heard of this one? Rocky road ice cream consists of chocolate flavoured ice cream, peanuts and diced marshmallows. Those of you who had the opportunity to try it know just how full of texture this ice cream is.

Serve this ice cream in a waffled cone, on its own, in a sundae or alongside a fruity crumble. For example, you can consider serving it alongside these desserts:

What is your favourite ice cream topping? Do you have a favourite topping for this tin roof ice cream recipe? Do let me know in the comments section below!