×
You are here: Home / Freezing Food / Can You Freeze Leeks? 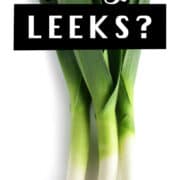 So, you’ve bought a whole load of leeks for that delicious soup you’re making. And it turns out you bought too many and you don’t know what to do with them.

Can you freeze leeks?

Don’t worry. Freezing leeks is easy! They’ll stay fresh and keep that great mild sweet flavour, ready to be called on when needed.

So, if you like these little green marvels and you’re wondering how to store leeks for a long time, we’ve got a step by step guide.

But first, let’s find out more about the unsung hero of the onion family.

Leeks belong to the same family as onions, garlic, shallots and chives (the allium family). Long and green, with a white bulb at the end, leeks are milder than onions, with a slightly sweet taste.

They make a really good addition to soups, stews, casseroles, pasta and risotto dishes, and even as a base for a creamy sauce.

Their mild, sweet flavour means that they pair well with many different foods. Leek and potato? Utterly delectable. Leeks and cheese? Pure bliss. Leeks and bacon? Well, I’m salivating at the thought of it.

If you want to blanch your leeks, you’ll need the following:

The origin of leeks

This thin green gift from the gourmet gods has its roots in the Mediterranean and the Middle East. Today, leeks are grown globally– the biggest producers are France, Belgium, Turkey, Indonesia and South Korea.

Although they’re typically more expensive than other types of onion, their subtle sweetness, versatility and ease of preparation make them very popular with chefs and foodies all over the world.

How long do leeks last in the fridge?

If you’ve bought too many leeks for your recipe and you want to use them fairly soon, freezing them won’t be ideal. Instead, store them in the fridge. They’ll last between 7 and 14 days in the fridge.

If you want to keep them fresh in the fridge, don’t wash them. They’ll last longer – just wash them before you cook them. When keeping them in the fridge, store them in a perforated veg bag. This will help them keep their moisture.

Leeks may start to become mushy after a couple of weeks in the fridge. So, if you want to keep them fresh for this long, you may want to think about freezing them.

Have you ever wondered how to freeze leeks? If you want to keep your leaks for longer than 2 weeks, freezing them is a great idea. It’s relatively simple and is done in a three part process.

First, wash them in water and cut them up, ready to be stored. Then you need to flash freeze them – this helps keep the moisture in the leeks. Finally, freeze them in an airtight container.

See the end of this article for a step by step guide on how to freeze leeks.

How to blanch leeks

Before you freeze your leeks, you may want to blanch them. Blanching leeks extends their life span, giving you fresh leeks for longer.

Can you freeze leeks?

Yes! Find out how to freeze leeks step-by-step below.

Are you a fan of leeks? Do you have a favourite leek recipe? Also, do you want to know whether other foods and ingredients can be frozen? Let me know in the comments below!