Are you looking for a Gruyere cheese substitute? Fret not, we’ve got you covered.

Gruyère cheese is one of the most popular cheeses in the world! Thanks to its versatility, taste and texture, there are many recipes which call for this Swiss cheese.

If your recipe requires the addition of Gruyere cheese, look no further. There are plenty of cheeses which are similar in terms of taste and texture. In fact, there are a total of 10 substitutes for Gruyere cheese which you can consider. 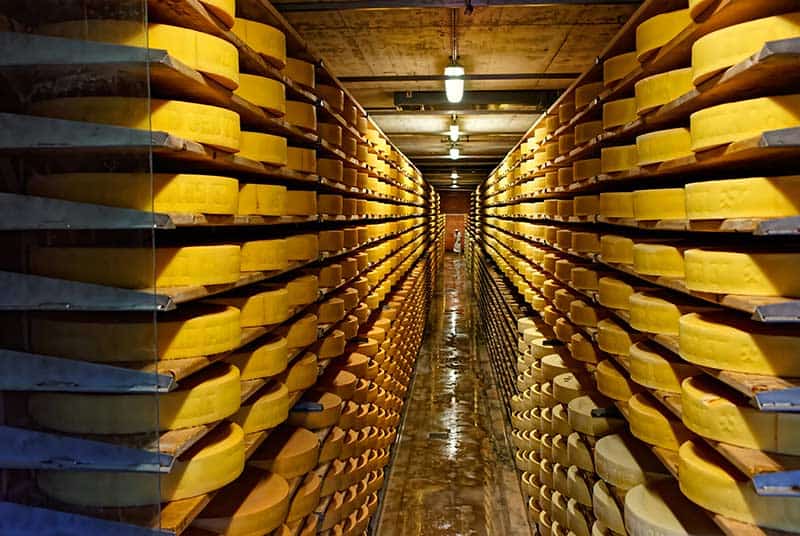 Gruyere, Gruyère cheese or Greyerzer, is a hard yellow cheese, made with unpasteurised cow’s milk. Its origins lie in Switzerland, more specifically in Vaud, Fribourg, Jura, Berne and Neuchatel. Its name is credited to the medieval town of Gruyères, which belongs to the canton of Fribourg.

In 2001, Gruyere cheese secured the Appellation d’origine controlee (AOC) status, as defined by Swiss law. This basically certifies that the cheese has a controlled designation of origin.

It is made in a way, where raw milk is heated up to 34 °C  and curdles by adding liquid rennet. The curd is then cut into extremely small pieces and then stirred which effectively releases whey.

The curd then reaches a temperature of 54 °C. Once the cooking process is finished, the curd is placed into moulds. The cheese then ripens for 2 months at room temperature. It is cured anywhere between 3 to 10 months, altering the intensity of the cheese. 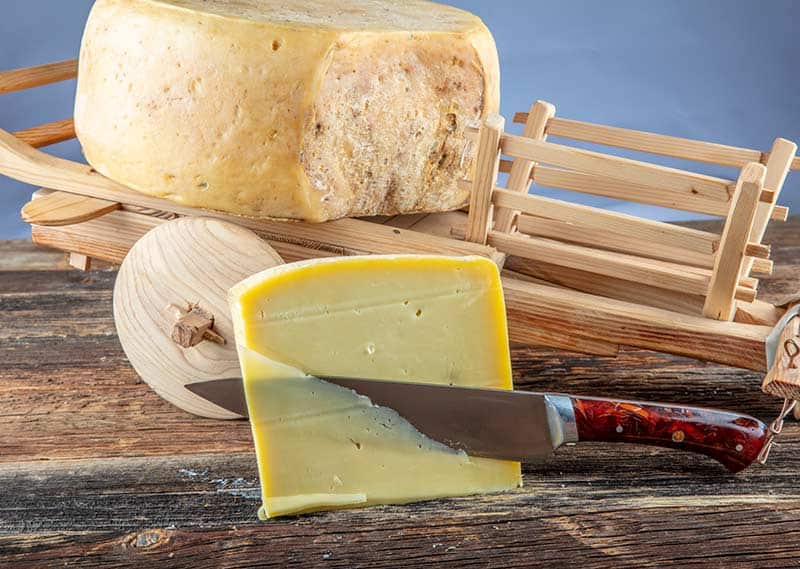 The cheese intensifies as it ages. The younger ones taste more subtle, while the older varieties obtain a granular texture and an intense nutty and earthy flavour.

In essence, Gruyere cheese is slightly salty and has a subtle sweetness to it. It has a creamy texture once you bite into it.

Where to buy Gruyere cheese?

Gruyere cheese is widely available across supermarkets. Just take a look in the cheese section, I am 100% confident that you will find it there.

Gruyere cheese is not sold whole (in wheels). It is sold exactly like Parmesan cheese, cut into slices of different sizes.

In France and Switzerland, you can easily find Gruyere cheese in a fromagerie. In fact, this is the best place to procure it from as the cheese is guaranteed to be fresh.

What is Gruyere cheese good for?

Gruyere cheese is rich in calcium, fat and protein. A slice of Swiss cheese makes up roughly 30% of your daily allowance of fat, so make sure you stick to enjoying a few slices, as tempting as the flavour may be.

Gruyere cheese varies according to its ageing process.

First of all, there is a special variety of Gruyere cheese produced only in the summer called Le Gruyère Switzerland AOC Alpage.

Here are the different age profiles of this Swiss cheese:

Which recipes have Gruyere cheese?

There are plenty of famous recipes which call for the addition of Gruyere. For instance, you can find cheese in the following recipes:

Try some of these recipes with Gruyere:

What kind of cheese is similar to Gruyere?

In essence, there are 10 cheeses that are similar in taste and texture to this Swiss cheese. Check out this list below, and find out which Gruyere cheese substitute is the best for you. 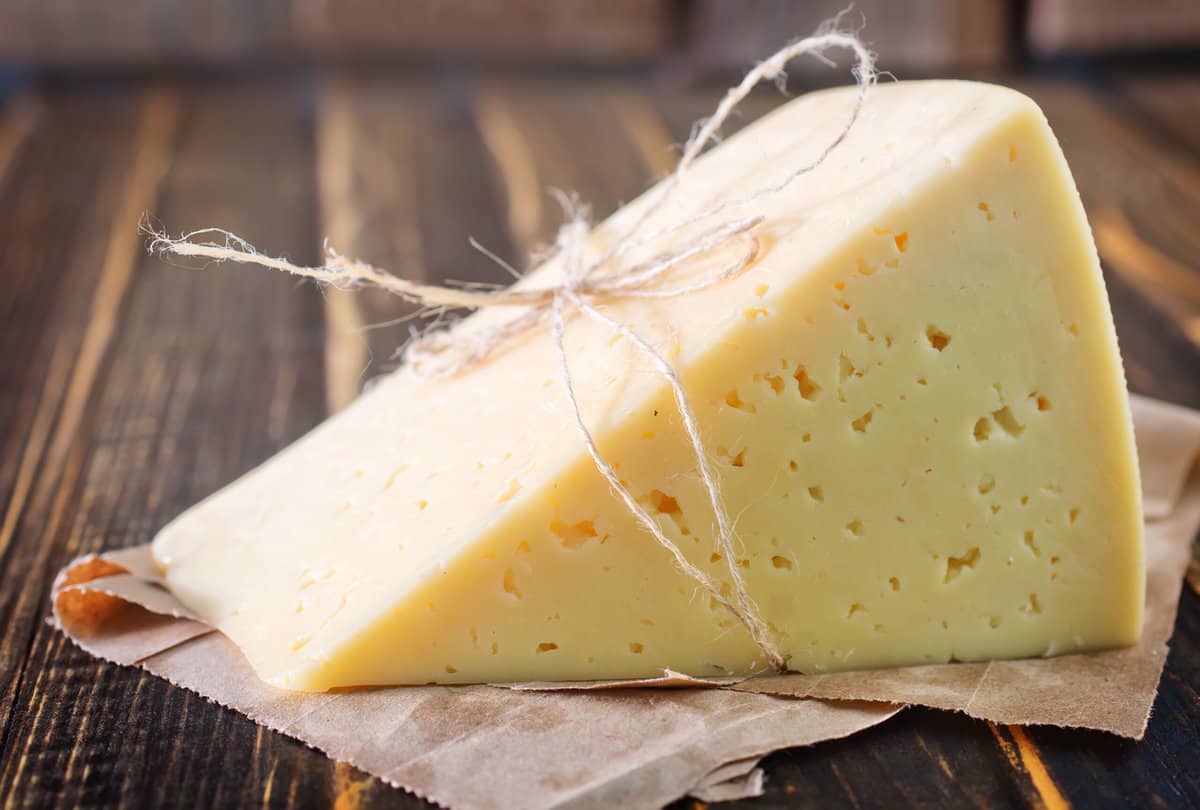 This is a firm French cheese originating from Lorraine. It is made with cow's milk and is often used in making quiches. The maturation time of this cheese is from 4–7 months. 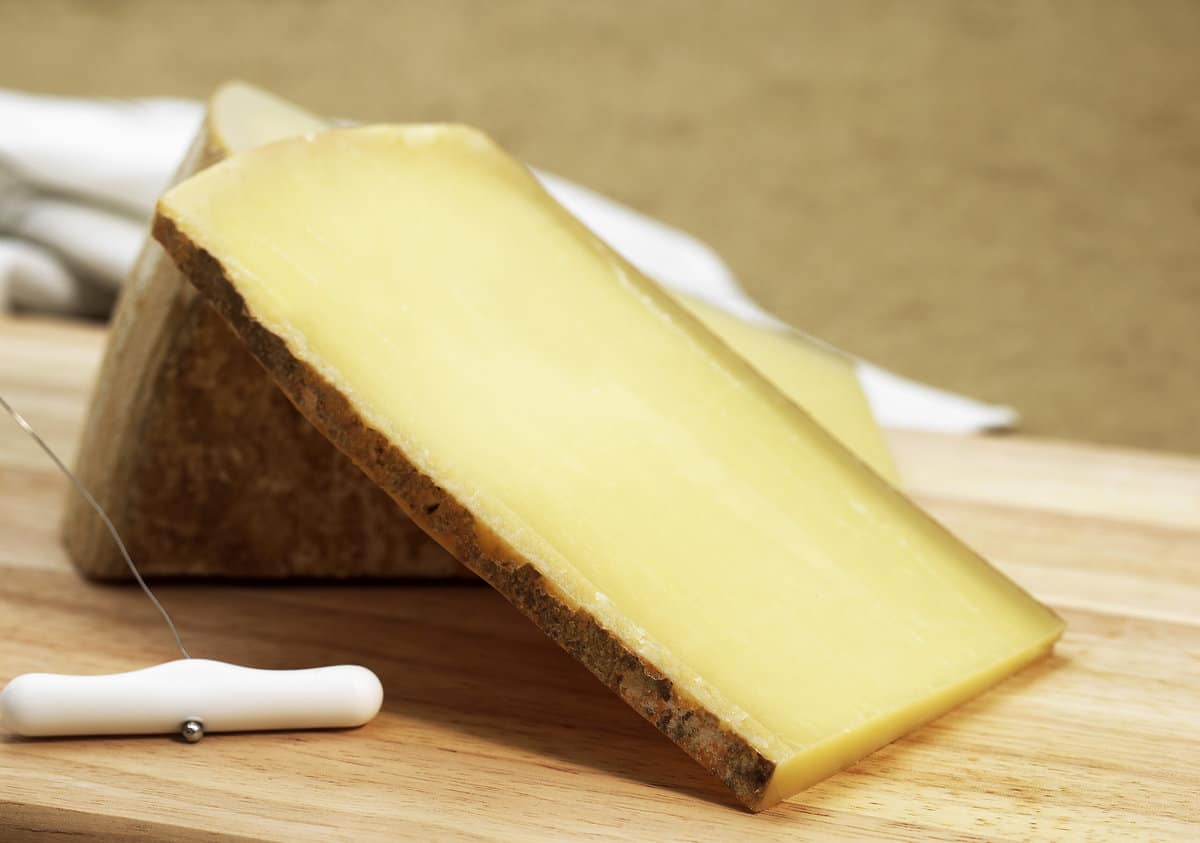 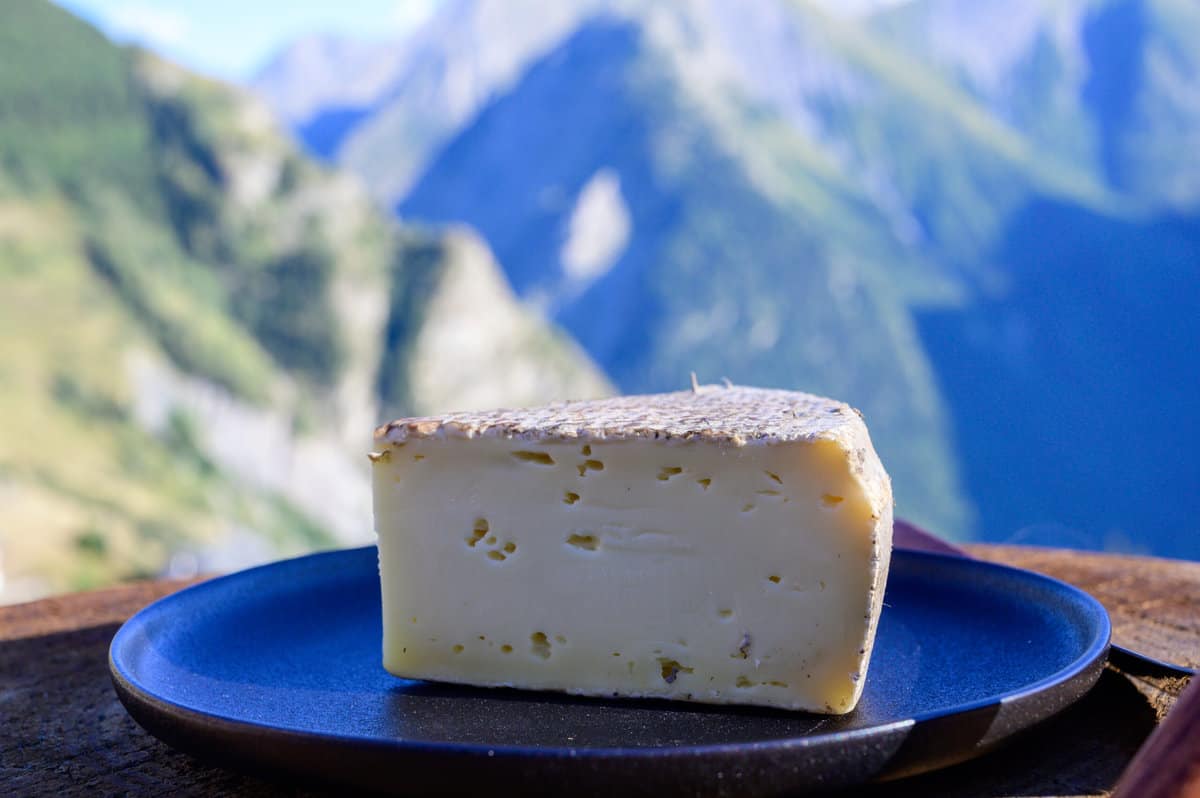 Beaufort cheese is a French cheese with a firm texture and a savoury flavour. In addition, Beaufort cheese is made with unpasteurised cow's milk and is known as one of the best Alpine cheeses in the world. It is produced in the French Alps, namely Beaufortain.

Graviera cheese is a Greek cheese, which is produced all over Greece. It's a hard cheese based on sheep's milk, however the flavour is very close to Swiss Gruyere. It ages typically from 5–12 months. 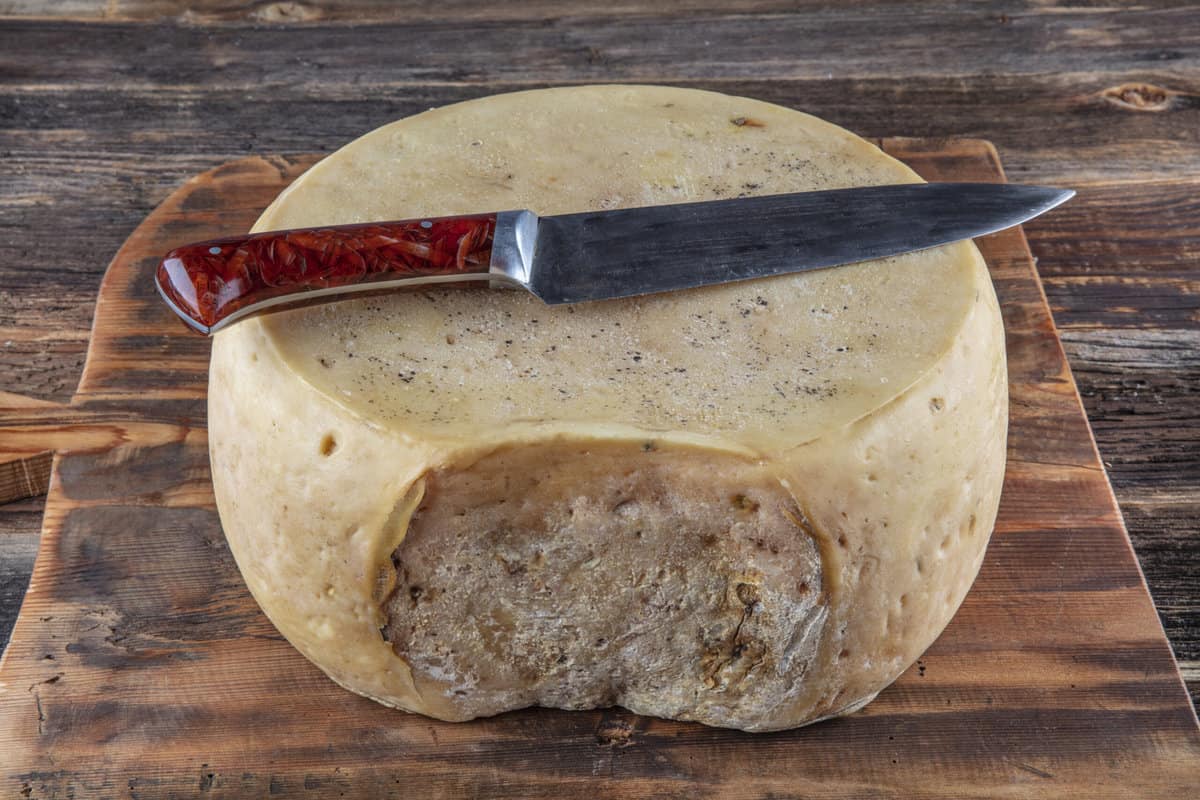 Kars gravyer, which is also known as Kars Gruyere cheese, is a hard cheese of Turkish origin made with pure cow's milk. However, sometimes one can find varieties with a mixture of cow and goat milk.

Also, Kars gravyer was invented by David Moser, a Swiss cheese producer, who was travelling to the Turkish region of Bogatepe. There he started the production of cheese. This cheese is an excellent substitute for Gruyere cheese. 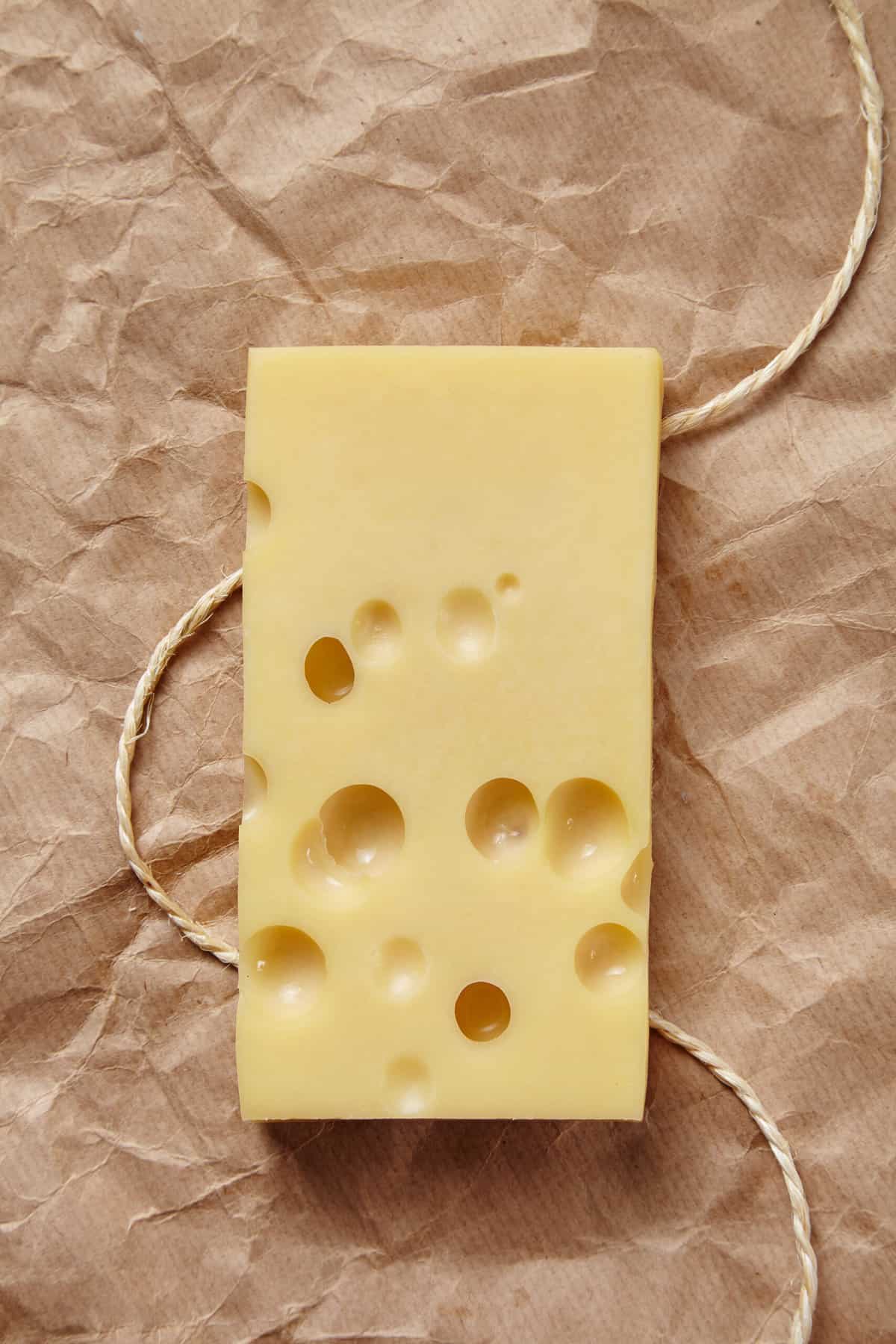 A cheese like Emmental is quite universal. Emmentaler cheese is another Swiss cheese. It is semi-hard and contains cow's milk. It originated in the area of Emmental, near Bern. Also, it is known for the famous holes in its structure.

A typical Emmentaler cheese ages anywhere from 2 to 18 months. As the cheese ages, the flavour becomes increasingly nutty. Due to the fact that the flavour of aged Emmental is so nutty, you should take precautions as to the proportions, as it might overwhelm the dish. Therefore, you'll need to add a smaller amount to avoid compromising the flavour of your recipe. Make sure to taste your dish throughout.

Quantity used: For 100 grams of Gruyere, use only 70 grams of aged Emmental cheese. 1:1 ratio with mild / young Emmental. 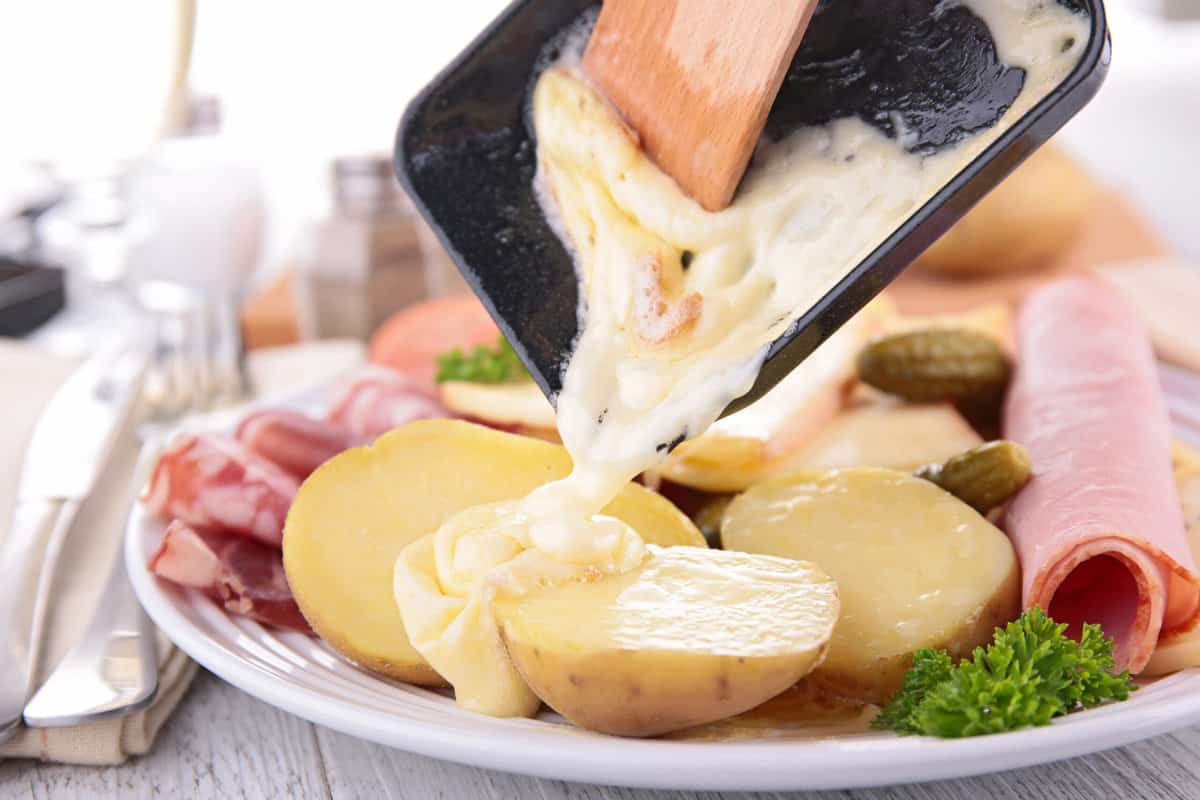 Raclette cheese is an alpine cow milk-based cheese that has a semi-hard texture. Its origins are in Switzerland, although the cheese is extremely popular also in France. Raclette has been around in the alpine region since the 12th century, where the cheese was originally favoured by peasants.

Today, raclette cheese is used to make fondues, as it has excellent melting properties. In terms of taste, it has a very distinct, almost salty taste. Also, it is very aromatic, so the flavour of an aged raclette cheese might be too bold for some people.

Quantity used: For 100 grams of Gruyere, use only 50 grams of raclette cheese. 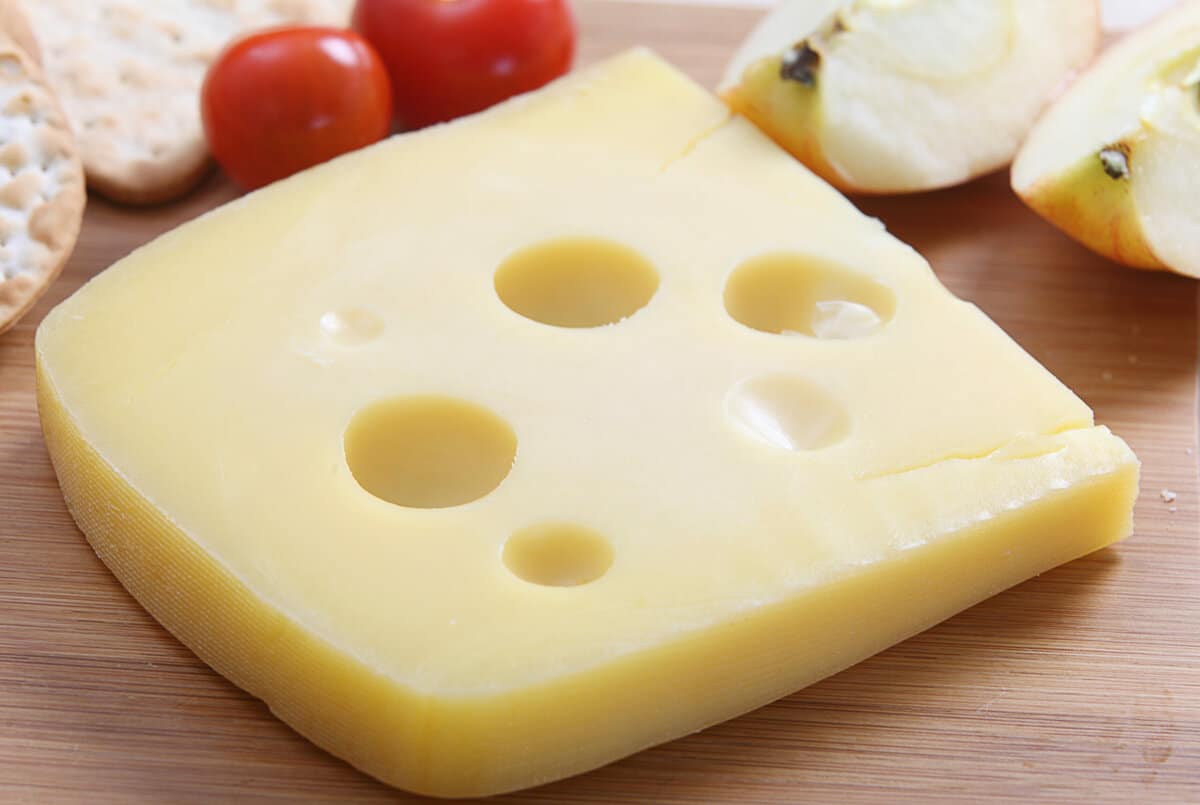 It also carries a slightly nutty and sweet flavour.

As a substitute for Gruyere, use the Jarlsberg cheese in baked dishes. 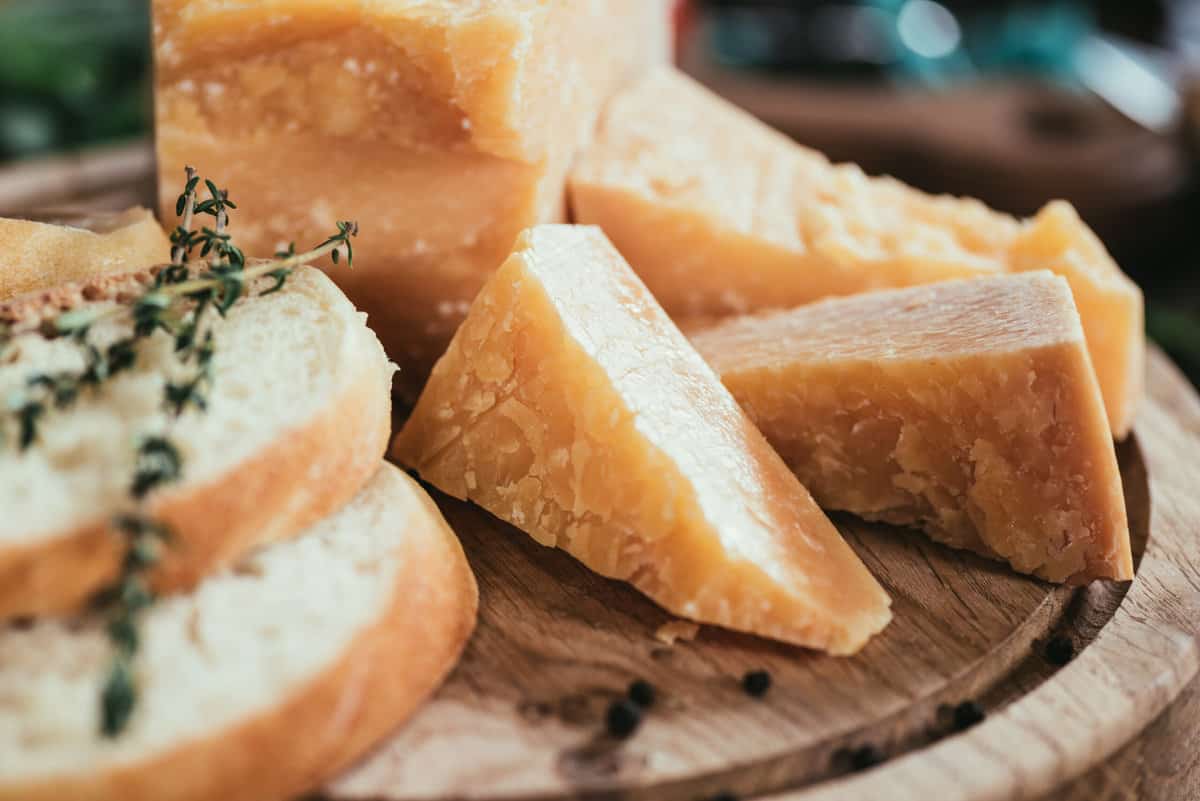 If you would like to get creative with your substitutes for Gruyere, you can try this mix of two cheeses. Both cheeses are Italian. Although, Fontina is a semi-soft cheese, whereas Parmesan is a firm cheese.

Quantity used: For 100 grams of Gruyere, combine 60 grams of Fontina with 40 grams of Parmesan cheese. 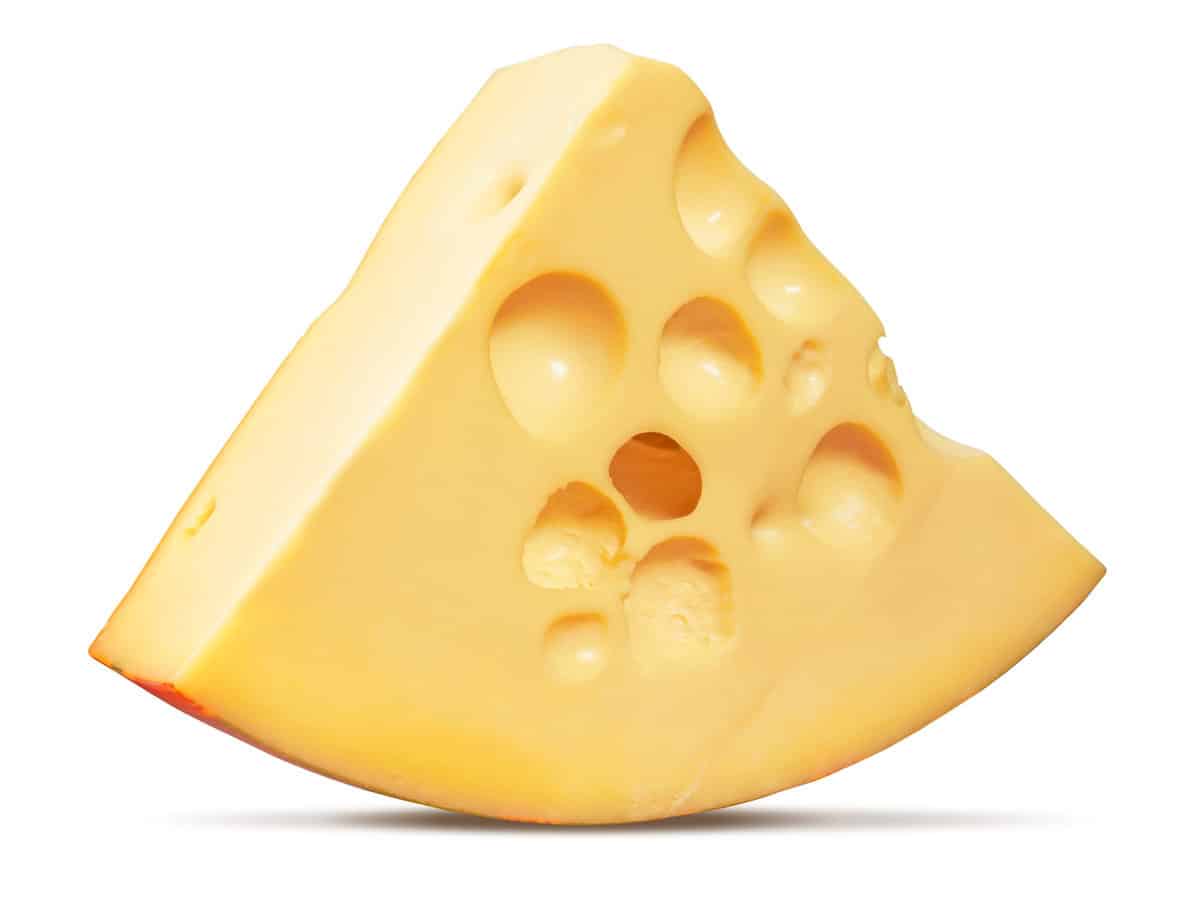 Edam is a semi-hard Dutch cheese made primarily with cow's milk. It is also known as Maasdam cheese. Most of the time, it is very mild and does not carry a rich flavour. Therefore it's a mild Gruyere cheese substitute.

If you don't like aged cheese, this one is for you! Plus, it has a similar consistency to Gruyere.

Quantity used: For 100 grams of Gruyere, use 130 grams of Edam cheese.

Can I substitute cheddar for Gruyere? 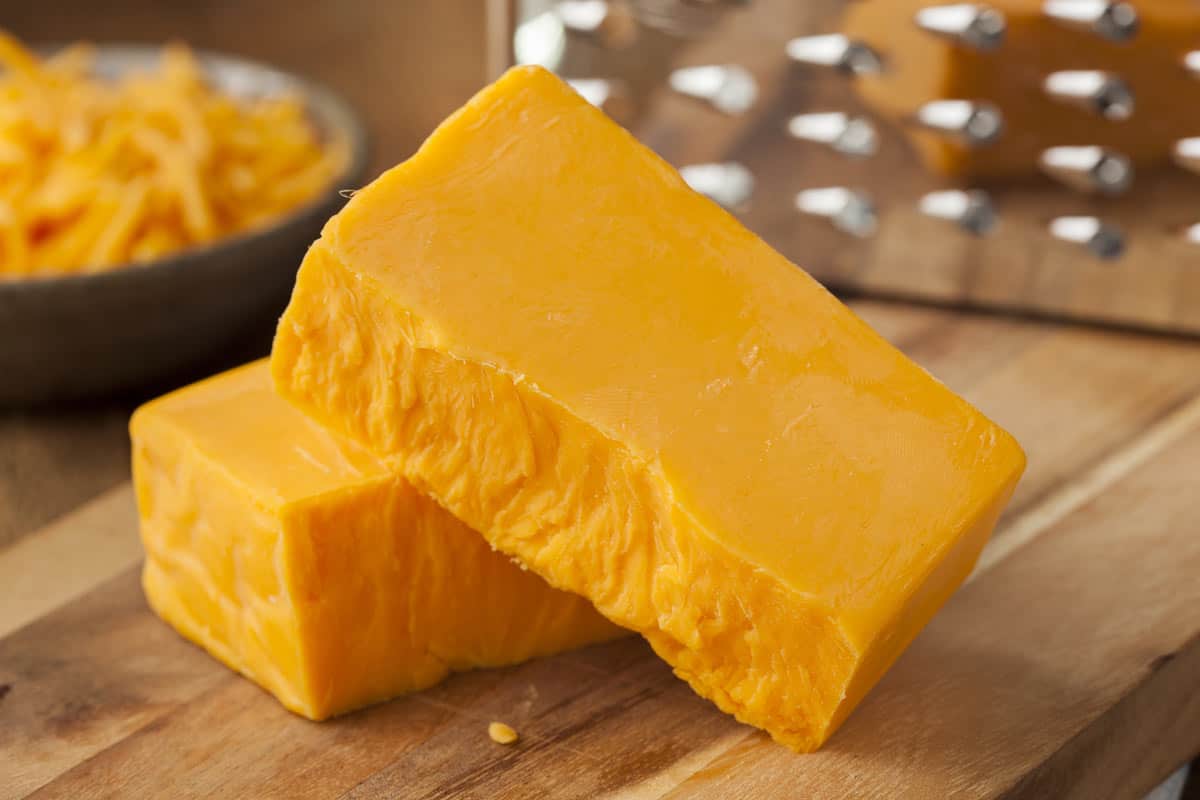 Even though cheddar has a completely different flavour and texture to Gruyere, you can use cheddar cheese in baked recipes. It is an excellent melting cheese and will work perfectly for a mac and cheese recipe for instance.

Can I substitute gouda for Gruyere? 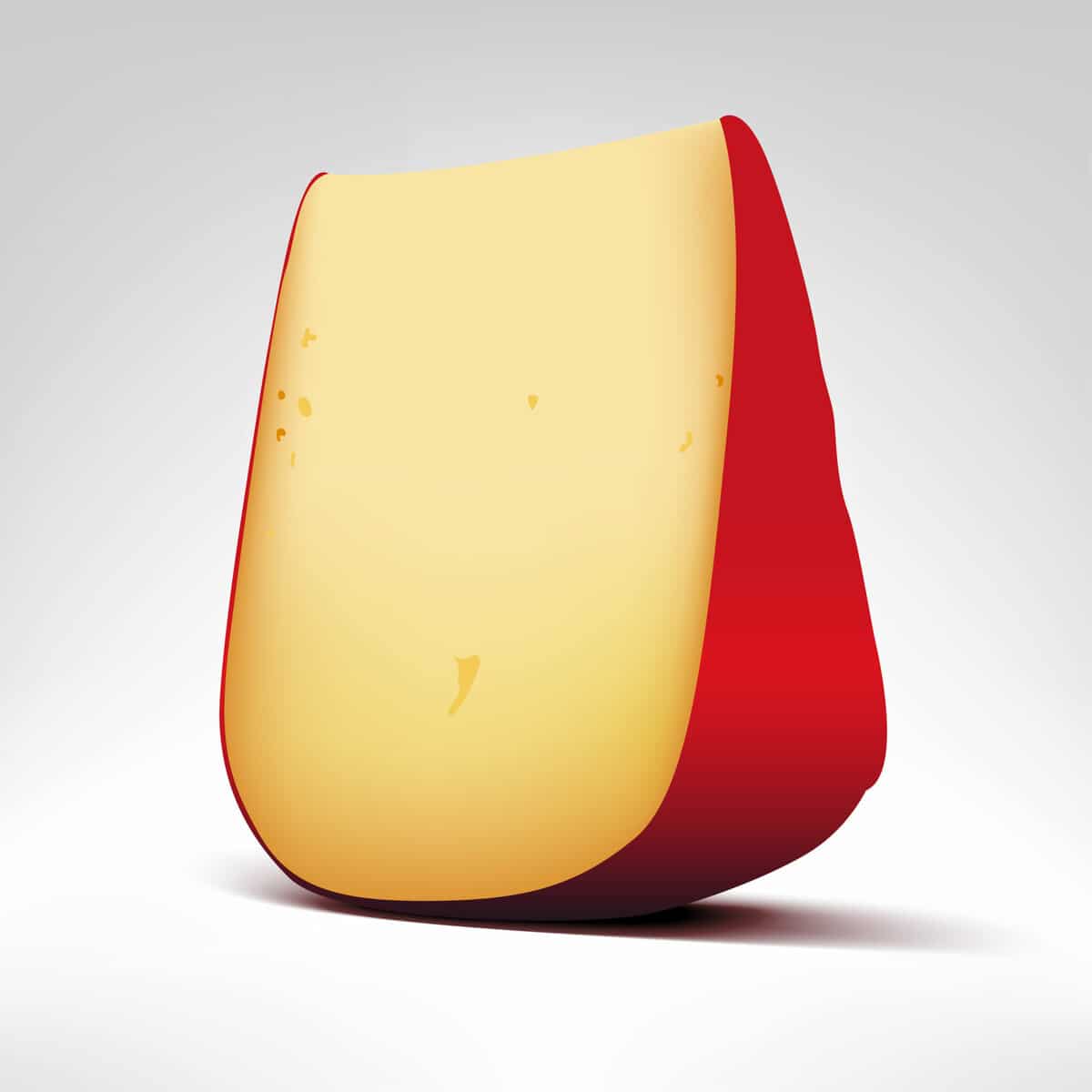 Gouda carries a very mild flavour. So, it cannot replicate that rich flavour one accomplishes with Gruyere. Therefore, it is not an appropriate substitute. Use it only as a last resort when you just need any type of cheese – for baked recipes.

Can I substitute mozzarella for Gruyere? 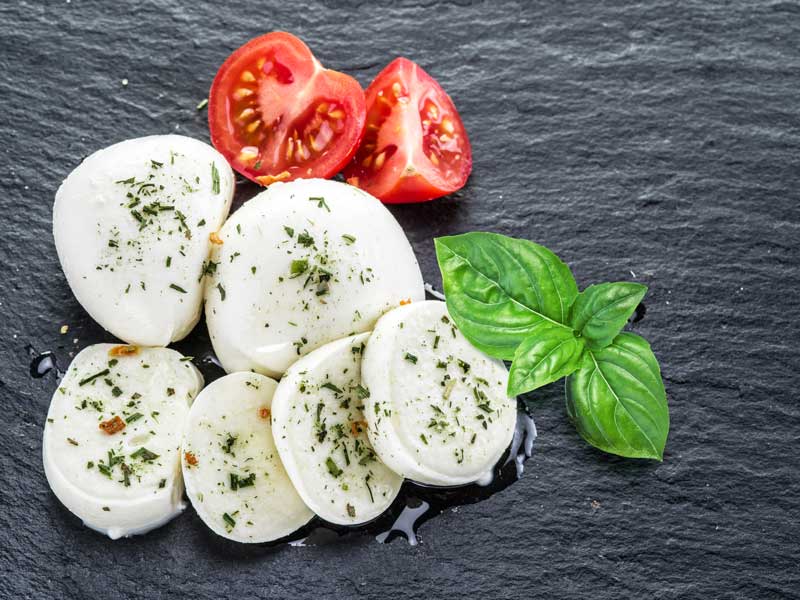 You can substitute mozzarella for Gruyere in pasta bakes, however you will never be able to replicate the rich flavour. Mozzarella has a completely different flavour profile. I would not recommend using mozzarella as a substitute for Gruyere.

What can I substitute for Gruyere in mac and cheese?

For mac and cheese, you need a mild and semi-soft cheese. Therefore, I recommend substituting with Edam or Jarlsberg. If you want a punch of flavour, go for raclette – it is perfect for melting.

Other cheese substitutes you may need to know about: