Havarti is a Danish cheese with a buttery, mild flavor that is great in many dishes. This delicious semi soft cheese made of cow’s milk is a fridge staple, but what if you’re out? Worry not! Use a havarti cheese substitute instead!

Havarti cheese comes from Denmark and was first made in the 1920s. Previously referred to as “Danish Tilsiter” after the German cheese tilsiter, this cheese has a buttery and creamy texture.

Havarti is also sometimes referred to as cream havarti.

WHAT IS HAVARTI CHEESE?

Sometimes called “butterkase cheese“, havarti is a washed-curd cheese that is rindless and creamy. It is cream colored and has tiny irregular openings called eyes throughout. These eyes are much smaller than that of swiss cheese.

It is often flavored with herbs such as dill, caraway seeds, chives, and horseradish.

DOES IT MELT WELL?

Yes, havarti cheese is a great melting cheese and makes an excellent addition to fondue, grilled cheese, or added to macaroni. This semi soft Danish cheese shreds nicely and can also be sliced thinly to help it melt.

DOES IT STORE WELL?

Yes, havarti cheese stores well in the warmest part of your fridge, such as the vegetable or cheese drawer for a couple of weeks. Once opened, it is best if wrapped in cheese paper or in plastic wrap.

Havarti cheese is known for its buttery flavor. It is a very versatile cheese with a mild and nutty flavor. Havarti comes from cow milk and does not have a rind.

HOW IS IT USED?

Because havarti is a mild cheese, it is quite versatile in it’s uses. It is an ideal melting cheese found in a variety of recipes. You may find havarti cheese in any of the following:

– Cold sandwiches, such as this one
– Macaroni and cheese
– Grilled cheese
– Sliced on a cheese board

Although you will find little holes in both havarti and “Swiss cheese”, referred to as eyes, the main difference between them is their places of origin. 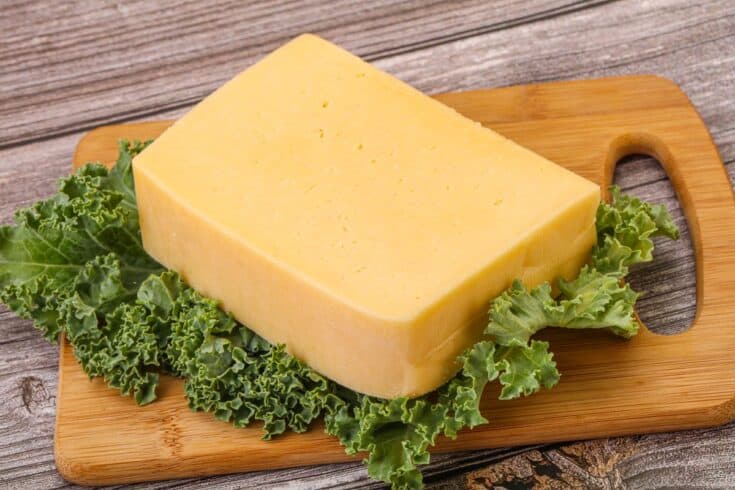 One of the best havarti cheese substitutes is tilsit. Tilsit cheese is a semi hard cheese from Europe with the closest flavor profile to havarti cheese taste.

The similar appearance of tilsit and havarti can be attributed the tiny holes through-out that are signature of both cheeses.

A pale yellow cheese, tilsit melts well and has a similar texture to havarti cheese. This cheese is often flavored with caraway seeds or peppercorns and pairs well with a dark beer.

To use tilsit cheese, add to salad, melted into casseroles, or even fondue where you would use havarti. 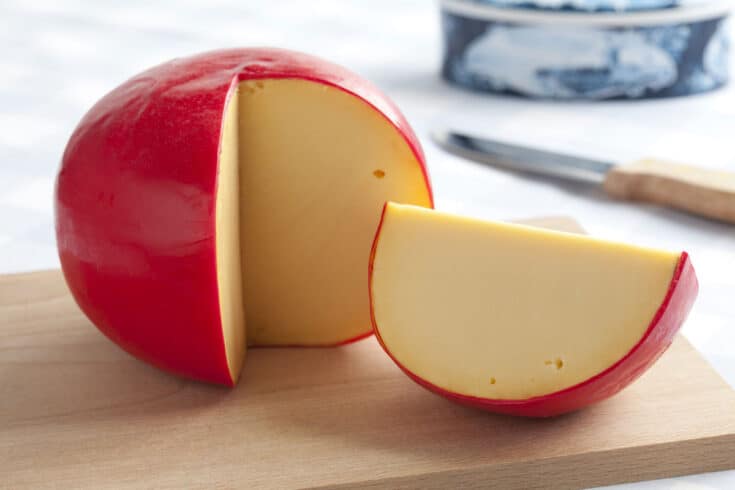 Also made from cow’s milk, edam cheese is an ideal substitute for havarti cheese. It is a dutch cheese found in the northern region of the Netherlands with a sweet, buttery flavor like havarti.

Edam is a semi hard cheese so the texture will be slightly different than the soft havarti.

Try to find a younger version of this cheese, as it will be less nutty and sharp as a more aged version.

Young edam is delightful paired with richer fruits such as peaches and cherries on cheese boards. As it ages, edam will become more crumbly and can be used in salads with apples or pears. 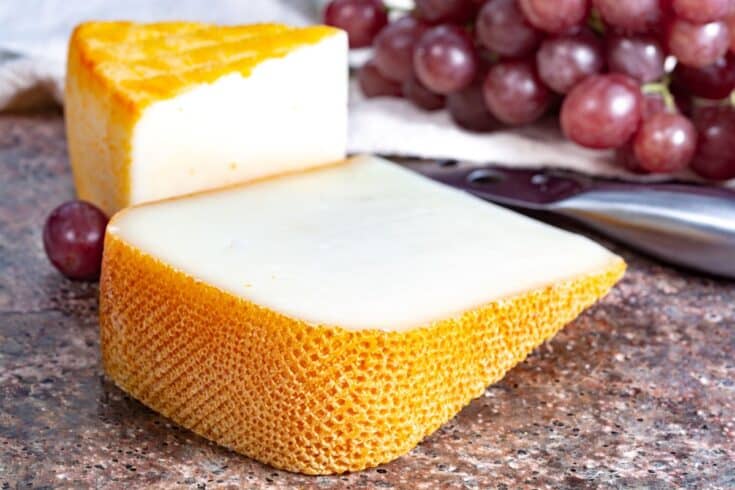 Saint Paulin is a creamy, mild, semi soft french cheese. Originally made by Trappist monks, this cow’s milk cheese is soft but firm enough for slicing to put on a sandwich, or grated into cheese sauces.

This havarti cheese substitute is a cousin to the well known port salut cheese and has a washed-rind which contributes to its flavor profile. The outside is rubbed with annatto, a natural food coloring from the seeds of the achiote tree, which makes the orange color found on the rind.

Sometimes served as a dessert cheese, Saint Paulin cheese goes great with a glass of light-bodied red or white wine and fruit. 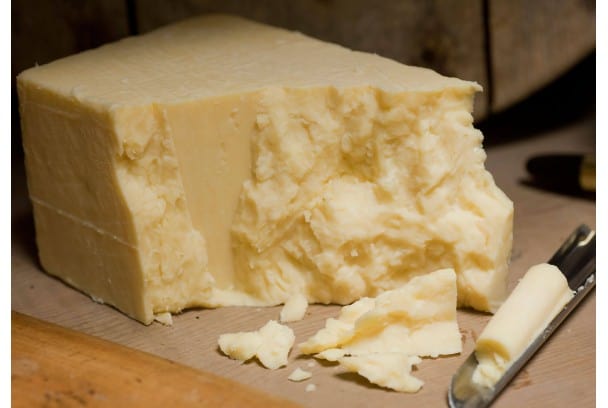 Mild cheddar cheese, or young cheddar, is a worthy stand in for havarti cheese. Made of cow’s milk, young cheddar is the most popular cheese in the UK, where it originated in the village of, you guessed it, Cheddar.

There are two commonly known types; mild and sharp cheddar. What makes the difference in these cheeses is the amount of time they are aged. This means a longer aging period will give you a sharper and crumbly cheddar that you may find on a cheese board.

Another characteristic of cheddar is the color. Commonly you will find white and yellow cheddar. The only difference being the addition of coloring, commonly annatto, to make a yellow cheese.

Better for a melting cheese is a young cheddar, especially for dishes where you will replace havarti cheese.

Cheddar cheese is delicious in baked cheddar biscuits, burgers, and even as an accompaniment to apples on cheese boards with crackers. 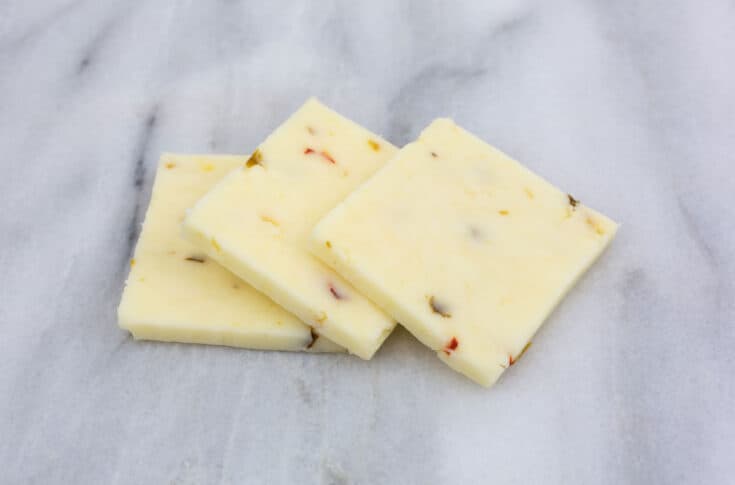 Monterey jack cheese is another excellent fill-in for havarti cheese. Monterey jack, or jack for short, is a California cheese made with cow’s milk that gets it’s namesake from the town of Monterey.

The mild and semi hard cheese is similar in flavor to that of havarti. Jack is aged for about six months, which is longer than havarti, resulting in a very slightly stronger flavor.

Monterey jack cheese is commonly combined with another great havarti replacement, colby cheese, to make colby jack cheese. You can recognize it by its marbled colors of white and yellow and its mild yet delicious flavor.

Monterey jack is a great melting cheese. Try it in a grilled cheese, quesadillas, or a bean and cheese burrito. 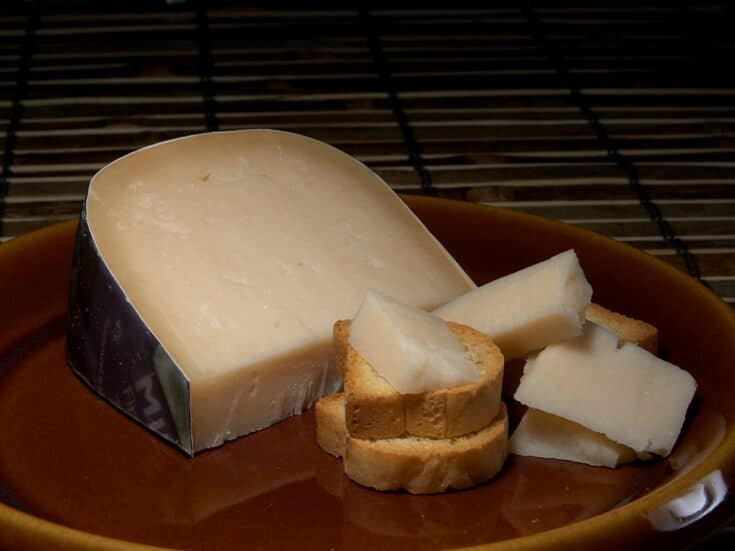 Similar to cheddar, young gouda cheese has a mild flavor that is an excellent replacement for havarti cheese. Gouda is a dutch cheese that is one of the oldest recorded cheeses still being made today.

Unlike aged gouda, which tends to have a sharper caramel or butterscotch flavor, younger goudas are fairly mild tasting with a semi soft texture. Aged gouda also contains crystals which occur during the aging process and add a lovely texture to the cheese.

Gouda is known for its wax rind which protects the cheese while it ages. Make sure to remove this before enjoying your gouda or you will be in for an unpleasant surprise!

Make your next ham and cheese quiche with shredded gouda, or try it in a breakfast frittata with diced vegetables. 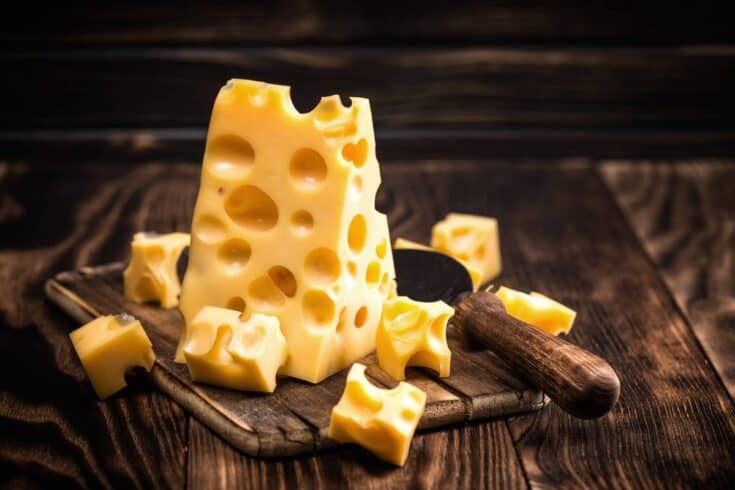 Emmental cheese is a swiss, or alpine style cheese, from Switzerland. Often referred to as swiss cheese, emmental is known for its holes which appear during the aging process and  distinguish it from other cheeses.

Emmental cheese is slightly nutty and fruity in flavor and a worthy substitute for havarti in your next recipe. Made from cow’s milk, this cheese has an inedible rind and a semi firm texture.

Commonly found melted into a fondue, emmental cheese is a mellow and creamy cheese. This makes it a great havarti substitute, whether being used in a sauce, melted over potatoes, or cut and put with meat on a cold sandwich. 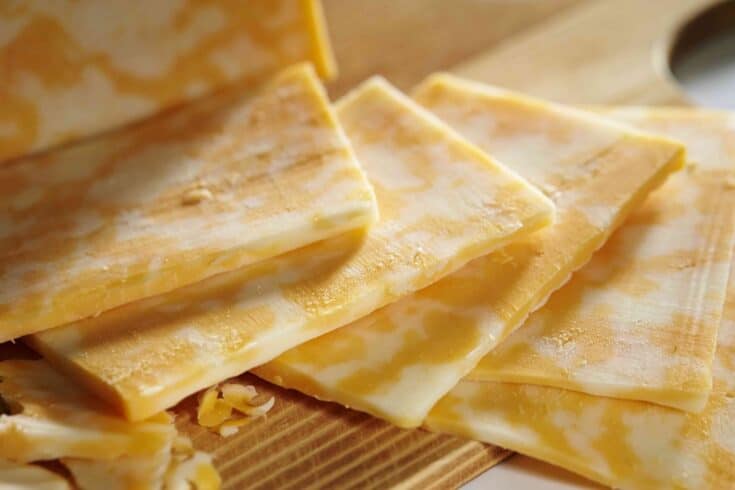 Colby cheese is a semi hard substitute for havarti cheese that comes from Wisconsin. It is one of the most famous cheeses in Wisconsin and even known to some as the state cheese.

Colby is commonly combined with another havarti substitute, monterey jack, to make colby jack cheese. The signature appearance of the popular marbled yellow and white cheese and mild flavors makes for an attractive addition to cheese boards.

Known for its subtle flavor, colby is an excellent melting cheese that can be used in recipes but also cut and eaten cold. Try the smooth flavor of colby cheese sliced on a sandwich with deli meat. 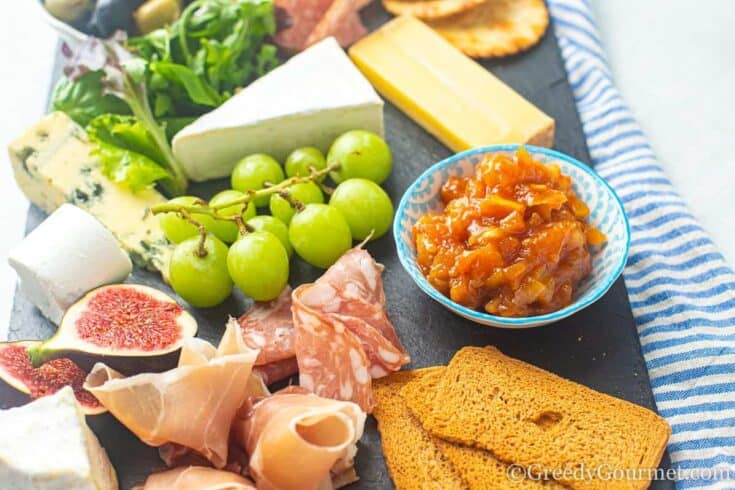 The final havarti cheese replacement is Esrom cheese.  Also known as danish port salut, this semi soft cheese is made from cow’s milk and has a slightly pungent flavor.

Esrom has small holes throughout, just like havarti, and a very buttery texture. Its bold flavor makes it a great pairing for darker beers and bold red wines.

Esrom is commonly used in open faced sandwiches in Denmark along with smoked fish, radishes, and onions.