You are here: Home / Ingredients / Pepperoncini vs Banana Peppers 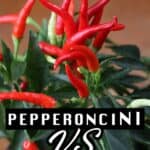 Pepperoncini vs banana peppers – they are often mistaken for each other. Don’t feel bad if you’ve ever done this, because you’re not the only one who’s confused over these two members of the capsicum annuum family.

This article will help you identify them next time you come across them in your sandwich, on a pizza, or just at the supermarket.

You could consider this article a bit like a first date. It’s a getting-to-know piece where you’ll meet two peppers from the chili pepper family; pepperoncini peppers and banana peppers.

Like many, many foodies you’ll have seen them pickled in fancy delicatessens, chopped up on salads, or mentioned as a reference point for heat on the Scoville scale.

But, it’s very easy to mistake one for the other. They look similar, smell similar, and you guessed it, they taste similar. Which begs the question, how do you tell them apart?

The good news is, this article will give you the answers to that question!

So, how about we break them down and compare the difference between pepperoncini and banana peppers.

First we’ll look at the SHU (Scoville Heat Units), then each pepper’s weight, its skin and appearance, and the thickness of its walls. We’ll also compare flavor, health benefits, and of course how you use it in cooking.

This might seem like an obvious question, but is there a difference in heat levels between the two chili peppers? The answer will probably surprise you.

Basically, no, there isn’t a massive difference when rated on the Scoville Scale. The Scoville scale is a measurement used for all foods with any heat, and pepperoncini and banana peppers are separated by next to nothing.

In fact, both peppers rate at 100-500 SHUs, which means they’re packed full of flavor, but won’t rip your head off with heat.

However, it’s worth remembering that these peppers start off green (about 100 SHUs), and as they mature they turn red. That’s when they get hotter! Just for reference, a bell pepper is rated as 0, and a jalapeno is about 8,000 SHUs!

Don’t laugh, it’s a serious question when comparing pepperoncini vs banana peppers. Also, in the case of ghost peppers, which are tiny by comparison to other peppers, small can mean deadly.

Fortunately, that’s not a problem with either pepperoncini or banana peppers, even if one is slightly larger than the other. Neither of these peppers will cause any ill effects to your health.

One of the quickest ways you might be able to tell these two peppers apart is their size. Although they may have a similar appearance when young (green), as they mature the pepperoncini can grow up to 50% longer.

On average, a banana pepper will grow to between 2 and 3 inches. The color will also change from palest green to light yellow, and finally to red which means they’re ready for harvesting.

Conversely, pepperoncini peppers will grow between 2 and 5 inches and follow a similar coloration development going from green to red.

So, if it’s longer, it’s a pepperoncini, shorter, it’s a Banana!

Another way to separate the two quickly is to look at the wrinkles on the skin, and the thickness of the walls. That’s the fleshy part that you eat.  Pepperoncini are a little more crinkled, with high and low points. Whereas the banana pepper is a bit more rounded and even, like a bell pepper.

When it comes to wall thickness, pepperoncini walls are quite thin, which means they don’t travel well and are better for topping salads and grilled meats. They’re also great for pickling, as they’ll absorb more liquid, and flavoring.

However, if it’s a filled pepper you fancy eating, then you want the banana pepper. Because its walls are thicker and stronger, it is ideal for stuffing or transporting fresh over longer distances.

This is why you’re more likely to see banana peppers in supermarkets and pepperoncini at farmers’ markets.

Now, what about taste? That’s the important part, right? The good news is they’re both delicious. Pepperoncini have a sharper, more piquant flavor, whereas banana peppers are slightly sweeter and have a mellow and tangy flavor.

Pepperoncini vs Banana Peppers – are they healthy?

Absolutely! Both of these peppers are loaded with beneficial vitamins, including vitamin A, B, and C, not to mention they’re a great source of iron. Also, because of their spicy hints, they’re also awesome at increasing your metabolism, which aids weight-loss!

If that’s not enough to sell you on these powerhouse peppers, how about they also improve blood circulation, can relieve clogged sinuses, and have also been found to relieve pain from arthritis?

Don’t forget, they’re also packed full of antioxidants, and are believed to help prevent some diseases like cancer, Alzheimer’s, and macular and cardiovascular diseases too!

Just remember, if they’re pickled, then they’ll have taken on a lot of sodium, which isn’t great for your heart or kidneys!

Feeling inspired after reading all of that? Good! Now, when it comes to cooking with pepperoncini or banana peppers, there are loads of recipes. Luckily for you, I have a host of great recipes here on Greedy Gourmet!

For instance, how about my Sweet Chili Chicken stir-fry? Or my super-comforting Venison chili to soothe away whatever ails you? What about a great marinade recipe? You can’t go past my Coriander and Chili. It’s simply amazing for all sorts of dishes.

Don’t forget, you can always search our suggestions for ‘chili pepper’ recipes here on Greedy Gourmet.