This is not one of those children’s soups with edible alphabet pasta inside, if you know what I mean! Traditionally speaking, an ABC soup is a Malaysian recipe that is often referred to as the ultimate-comfort vegetable broth. You can enjoy this soup anytime and anywhere, while tossing in leftover ingredients and vegetables. In Asia, it’s a very popular vegetable soup, and almost every household has their own version of it. The general rule with an ABC soup is you can add any of your favourite ingredients, without comprising the three core ingredients. Keep reading to find out which three core ingredients make up an ABC soup!

This vegetable ABC soup is a Malaysian-style vegetable broth, full of nourishing ingredients. What’s best, you can easily make this recipe vegetarian-friendly by omitting the chicken drumsticks! If you’ve got a slow cooker at home, this recipe is definitely for you! Lastly, I highly recommend making this soup at home for a family dinner with your children, so that they can get their daily vitamin intake.

The three core ingredients of ABC soup that correspond to the above-mentioned vitamins are carrots, potatoes and tomatoes. See below which ingredient is responsible for each specific vitamin:

Generally speaking, various versions of this soup are found all over Asia. Every country puts its own spin on it. However, it is argued that traditionally speaking, the origin of this ABC soup lies in Malaysia. Whereas, in China, many people argue that the origin of ABC soup is Chinese. In fact, this soup is not so dissimilar from a Chinese chicken and sweetcorn soup. Altogether, no one really knows the exact origin of ABC soup recipes, but if you travel throughout Asia, you are bound to find it on the menu. 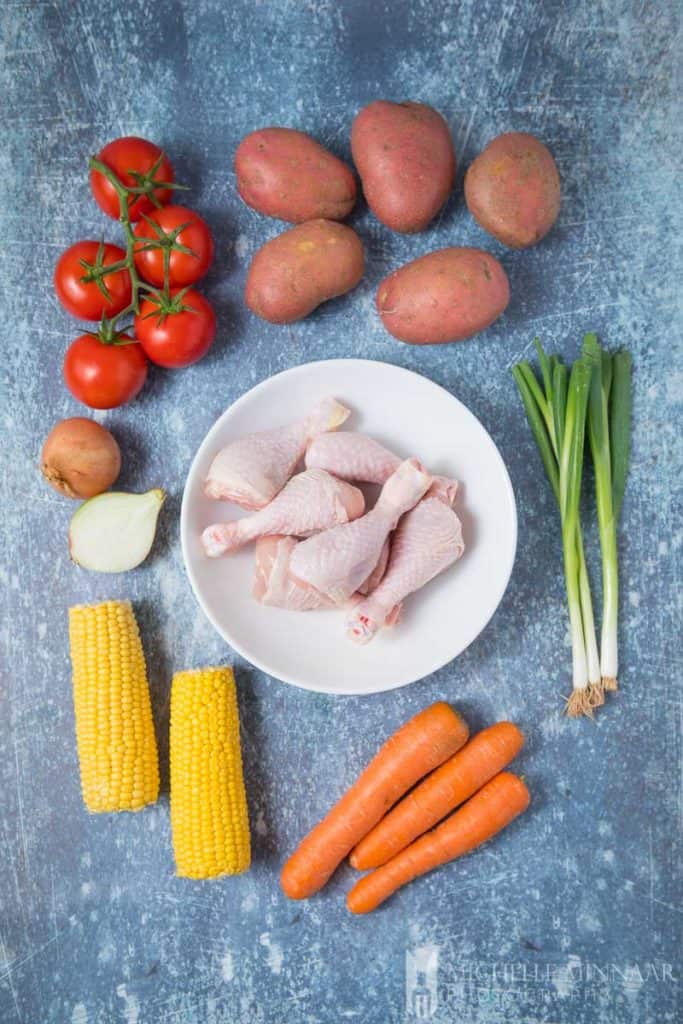 My version of the ABC soup calls for using chicken drumsticks. However, if you are vegan or vegetarian (which is great!), you can easily make this soup to suit. Just leave out the meat element and let the vegetables shine for themselves! Furthermore, do not add any chicken stock or vegetable stock – my recipe doesn’t call for it. Plus, the stock cubes are not the greatest for your health!

how to make a traditional ABC soup

There are many versions of ABC soup. Just check out some of these ideas below.

First, let’s start with chicken. My recipe calls for chicken drumsticks. For extra flavour, you can first smoke the chicken cut of your choice, which will add much more depth to the soup. Otherwise, you can learn how to smoke an entire chicken, and use leftover smoked chicken in this recipe.

You can also consider these cuts:

In China, it’s very common to use pork cuts in an ABC soup recipe. The most popular cuts of pork include pork ribs, which fall apart when the soup is done. If you wish to make a really meaty version of this soup, you can add the chicken as well as the pork. 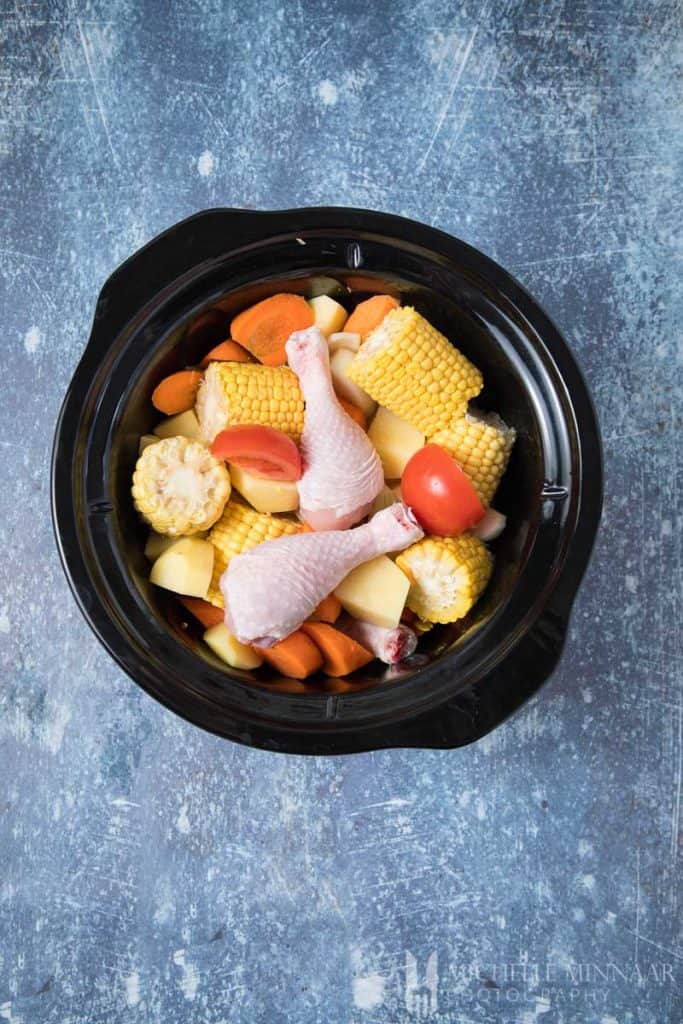 Careful! This is a completely different recipe. A Mexican ABC soup is in fact a Mexican Alphabet soup, which is also called ‘sopa de letras‘. Basically, it involves a tomato-base and the alphabet pasta. Totally different from the Asian ABC soup, so don’t confuse the two.

how to make a vegetable soup more filling

To make this ABC soup more filling, add some cooked rice and stir!

Otherwise, you can go heavy on the potatoes. However, if you decide to do so, the potatoes might change the consistency of your soup and turn it into a stew. Remember, the starches will start to work! So, just be careful, because there is a fine line in terms of how many potatoes you can actually add. If you do decide to go for potatoes, I recommend using the ones that are more waxy (common in salads). At least these ones won’t fall apart in your soup, as they contain less starch.

One of the best toppings for this ABC soup is fresh spring onions. However, you can also opt for bean sprouts, fresh coriander and drizzle a bit of lemon juice on top, as seen in many Vietnamese soup recipes.

For a bit of heat, cut up some fresh red chilli peppers and toss them into the soup. It’ll warm you right up on a cold and rainy day, or if you’ve got a case of the sniffles.

Other herbs you can consider as a finishing touch for this soup include fresh parsley, fresh chives or fresh mint. So many things to choose from! Which topping do you generally prefer on your soup?

An ABC soup recipe is Asian and very common in Malaysian and Chinese cuisines. ABC soup stands for vitamins A, B & C from carrots, potatoes and tomatoes. 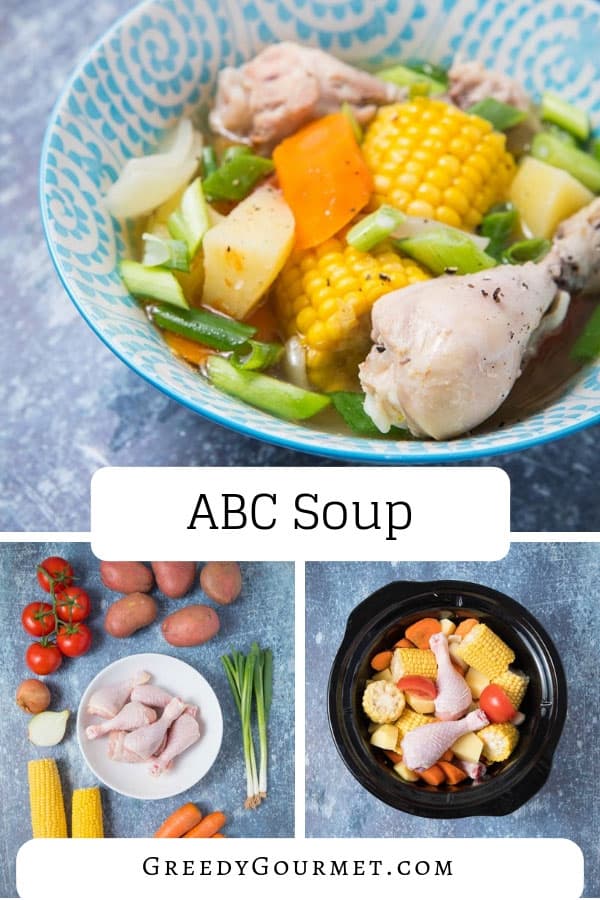