You are here: Home / Cooking Times / a) 30 mins or less / Chinese Chicken and Sweetcorn Soup
Jump to Recipe

Chinese chicken and sweetcorn soup is a definite winter warmer. It is not the traditional chicken soup or chicken broth as we are accustomed to eating in Europe and the US. 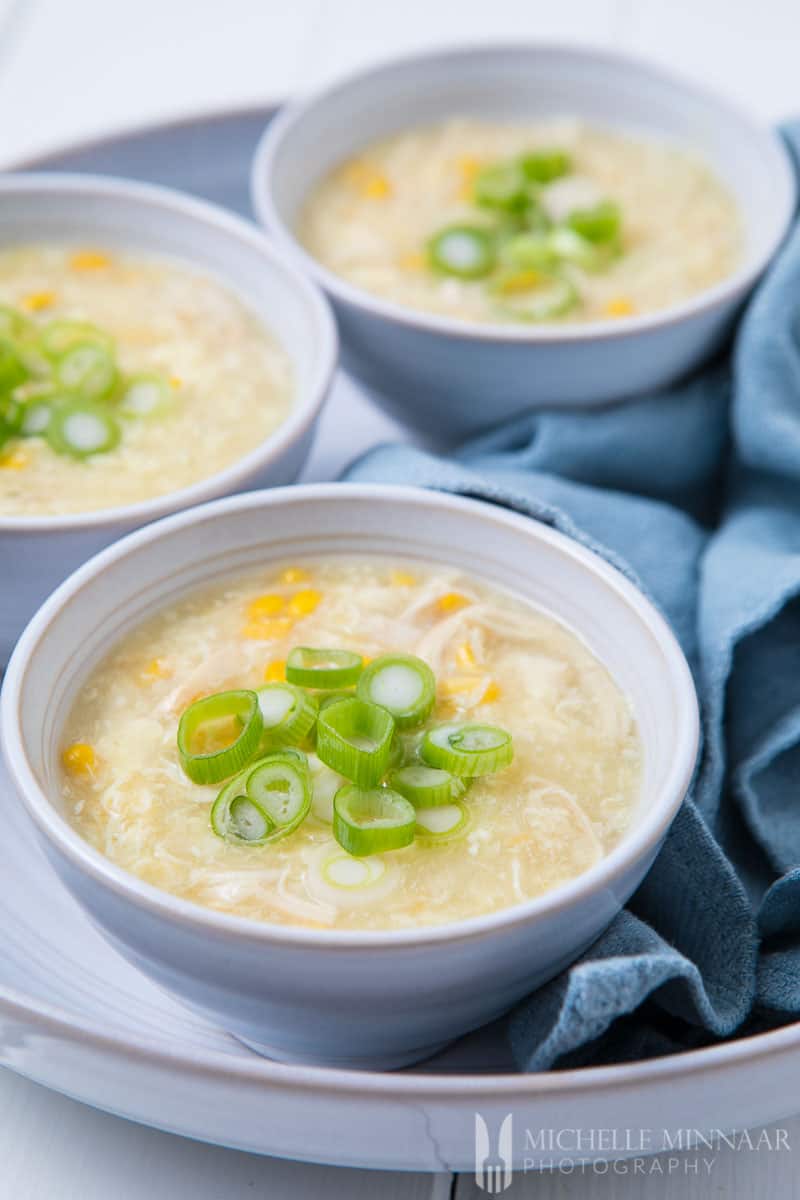 In comparison, this chicken soup recipe has tons of Asian flavour running through it.  The best part is that this Chinese chicken and sweetcorn soup only takes twenty minutes to prepare.

Unlike the usual chicken soup that takes hours to cook in a crockpot, with this Chinese recipe you can relax and enjoy your evening. So don’t even think for a second that you should order this soup from a Chinese takeaway.

Make your very own fakeaway in the comfort of your own kitchen in just a matter of minutes. In addition, you can use leftovers from a chicken or a smoked turkey from yesterday’s dinner.

This soup is all about being sustainable which I am all about! I hope you enjoy making this classic Chinese chicken and sweetcorn soup.

Don’t be afraid to add ingredients to make it your own and use up the leftovers in your fridge. Indulge in this comfort-food chicken recipe!

When it comes to keeping to traditional Chinese cooking, you have to try this Chinese chicken and sweetcorn soup. It is made up of very few ingredients such as garlic, ginger, sweetcorn, chicken stock, chicken and spring onions simmered in a saucepan.

Hence, the soup is perfect for making a cheap meal during the week, as it contains inexpensive ingredients. It is generally seasoned with a variety of sauces. These include soy sauce and of course the addition of sesame oil.

However, if you don’t have these at home you won’t ruin the integrity of the soup. Ultimately, what gives this Chinese soup its nutritional value and originality is the addition of egg, which also gives a creamy consistency.

So, you too can make an authentic Chinese chicken and sweetcorn soup wherever you are, and it will still taste as if it’s been made in China!

Here’s a list of the top products you’ll need to make this classic Chinese takeaway recipe:

I always say that the best recipes don’t necessarily have to be made up of gourmet ingredients for them to taste out of this world. My secret to making the best Chinese chicken soup is the main ingredient – which is the chicken, of course!

First of all, as with any chicken recipe, I encourage you to always brine your chicken beforehand for the juiciest and most tender results. The last thing you want is stringy chicken, even if you serve it in a soup. So, check out my ultimate guide on brining chicken.

Next, have you ever eaten smoked chicken in a salad or a sandwich? It makes all the difference when it comes to adding that rich taste! The same goes for this Chinese chicken and sweetcorn soup.

My advice is, make a whole smoked chicken for dinner and serve it the night before. You can toss any leftovers from the chicken into the soup.

Furthermore, even if you separately make smoked chicken breasts or smoked chicken thighs, you can pull the meat off and use it. That smoky flavour will be present throughout the soup.

It will pair very well with the freshness of the spring onions and the sweetness of the corn.

If you feel like the chicken soup lacks filling, even though it has lots of protein in it, you can still add egg noodles. Consider using the noodles as I did in this Asian recipe.

Alternatively, you can also use rice noodles, which are a little bit thinner and more appropriate for this Chinese soup. In authentic Chinese cuisine, most soups are made with noodles.

If you are cautious about calories, you needn’t worry. You can easily spin this recipe in a lighter direction. Although, the soup itself is already light in calories and quite nutritional.

First, to make this soup more filling but light, add courgetti instead of noodles. The courgetti will fill you up in an instant. Next, you can also consider using a light soy sauce instead of the normal one.

Most importantly, to cut down on sugar, limit the amount of sweetcorn. You can also choose not to include the sweetcorn at all.

Instead, opt for using more green vegetables such as bok choy, broccoli, Chinese cabbage, or similar. I also like including mustards, because they pair excellently with the chicken stock. Feel free to choose the vegetables that you most enjoy. 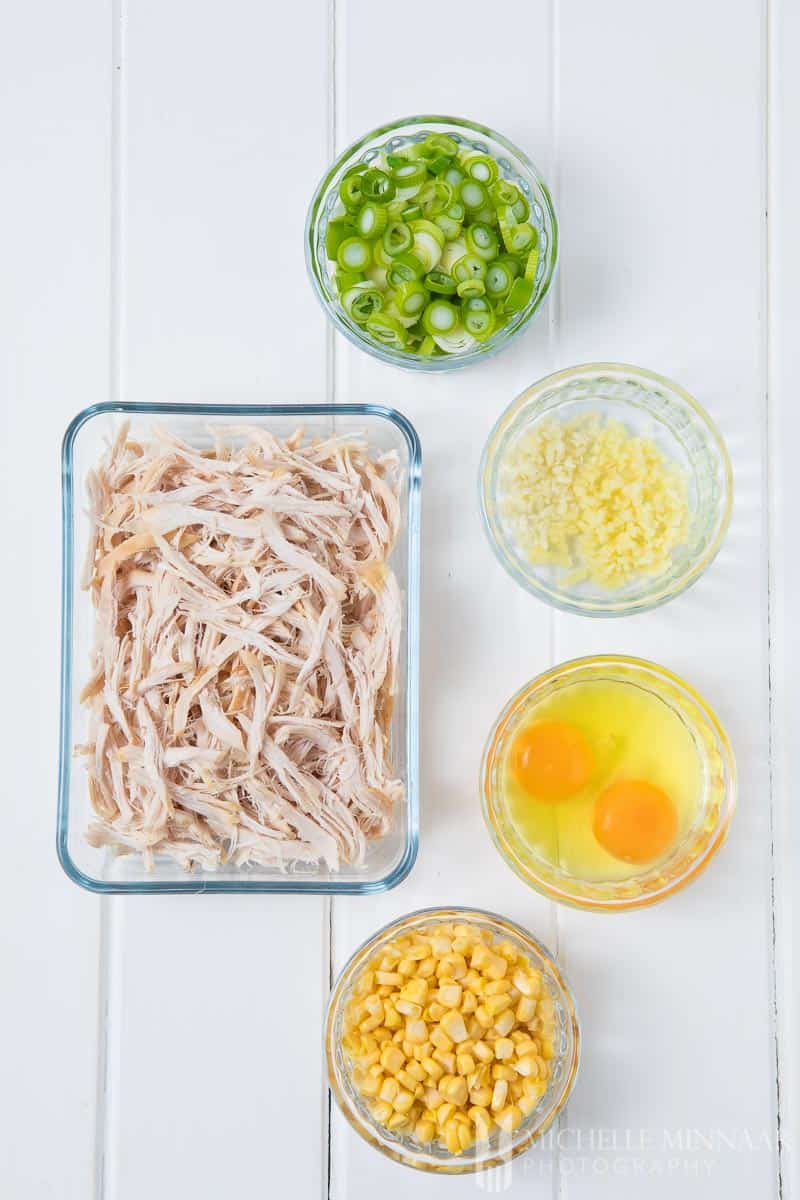 For a creamy version of the Chinese chicken and sweetcorn soup, simply add cream – though I recommend blending the cream, chicken stock and sweetcorn together with a blender prior to adding any other ingredients.

The sweetcorn will give it that extra sweet punch of flavour, as found in corn chowder recipes. Otherwise, if you’ve got your hands on a can of creamed corn and some cornstarch, that will also do the trick.

Some people also like to make a version with unscented coconut milk. However, the taste profile of this soup then resembles more of a Thai chicken soup.

I would definitely throw in some lime leaves and lemongrass and steer this recipe in a Thai direction. Ultimately, if you want to, you can do so! 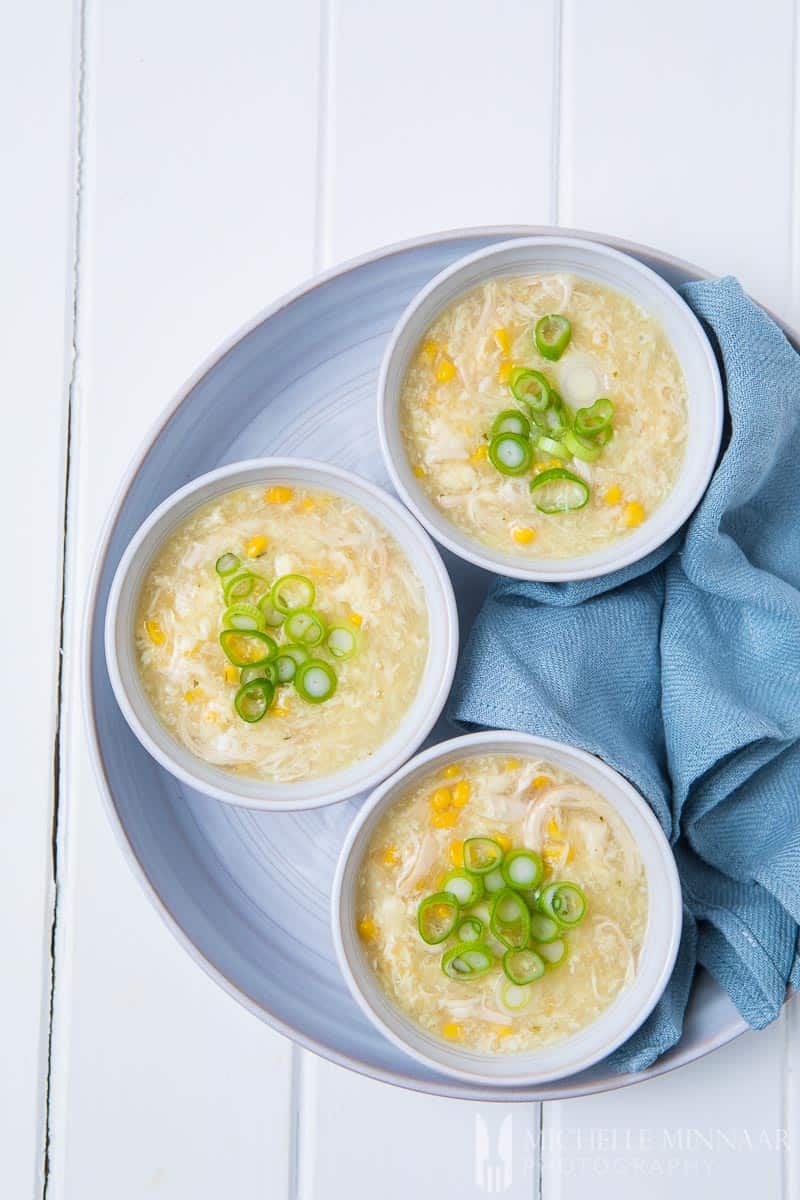 I adore toppings on any soup, curry, stew, you name it. The best toppings for this Chinese chicken and sweetcorn soup are the classic Asian toppings. These include a few bean sprouts, a dash of fresh coriander or parsley leaves.

For a bit of a kick, feel free to cut fresh red chillies and sprinkle them over. Traditionally, you can also add fresh chives, even more spring onions or fresh mushrooms for an earthier flavour.

Lastly, I love to add a splash of lemon or lime juice for a bit of acidity. Again, feel free to make this Chinese soup your own! 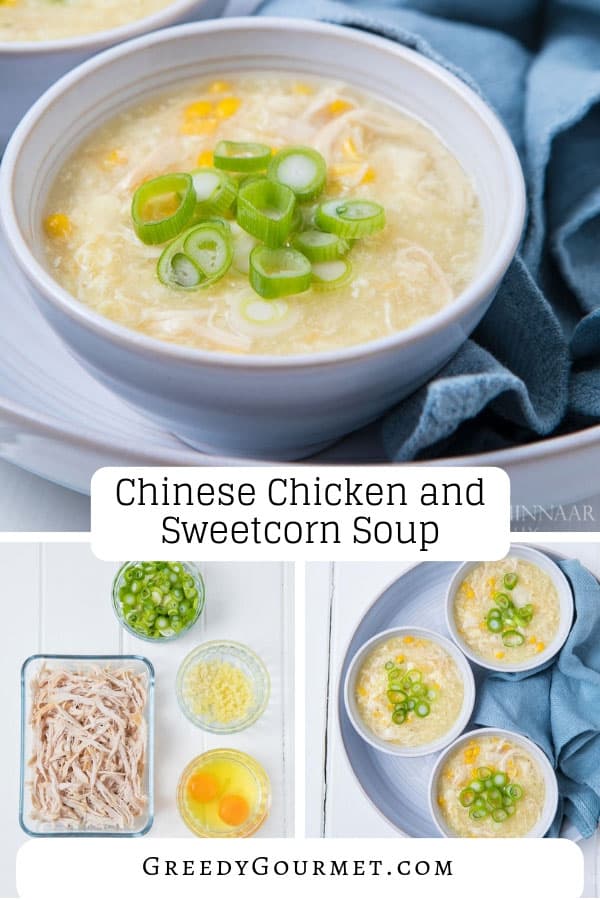