A Ham en Kaas Souttert is just what you need for a hearty, simple family meal. I remember growing up in South African totally loving it. 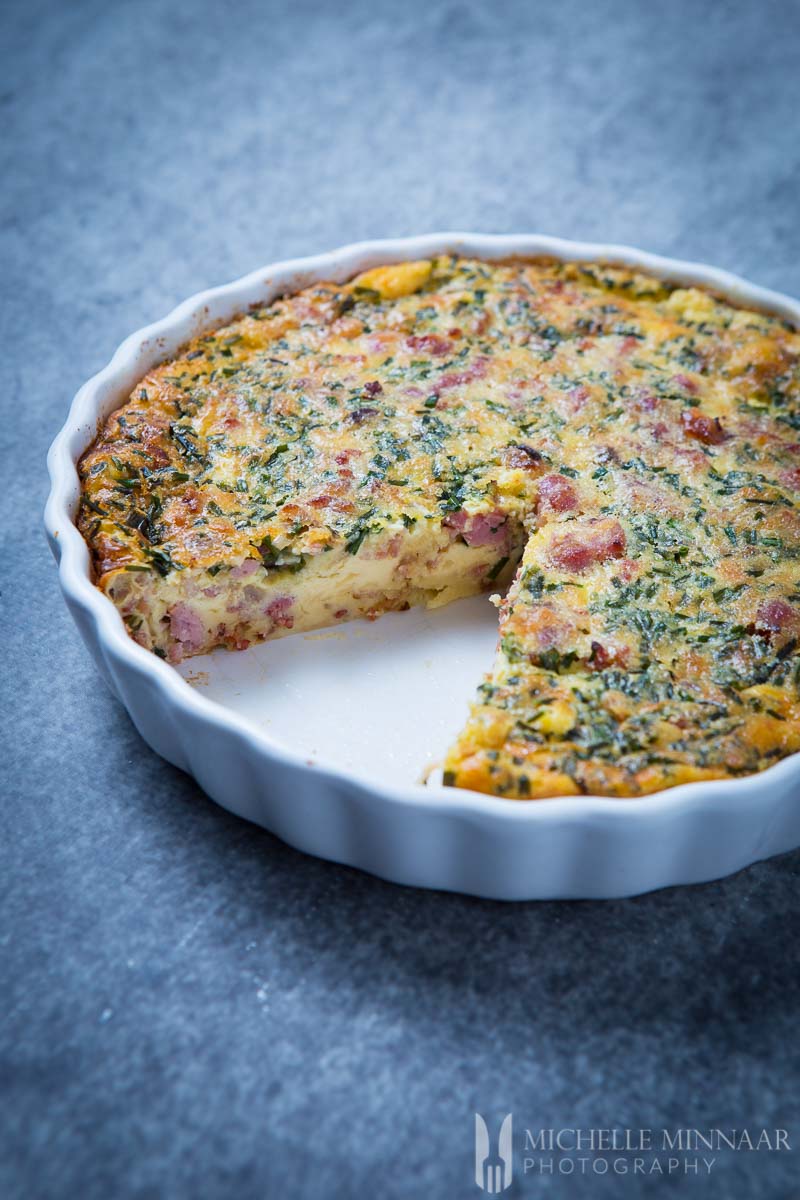 This South African meal is not the typical meal you would expect in terms of spice levels and cooking with wild game. This time its more of a traditional comfort meal that you would expect to eat during a busy week.

The best part is that it stores really well and can keep up to three or four days in the fridge. Honestly, I don’t think there’s a need to worry about storing leftovers because when the family is done eating, there’s almost nothing left!

Enjoy exploring more of traditional South African cuisine and do leave a comment on how you got on. 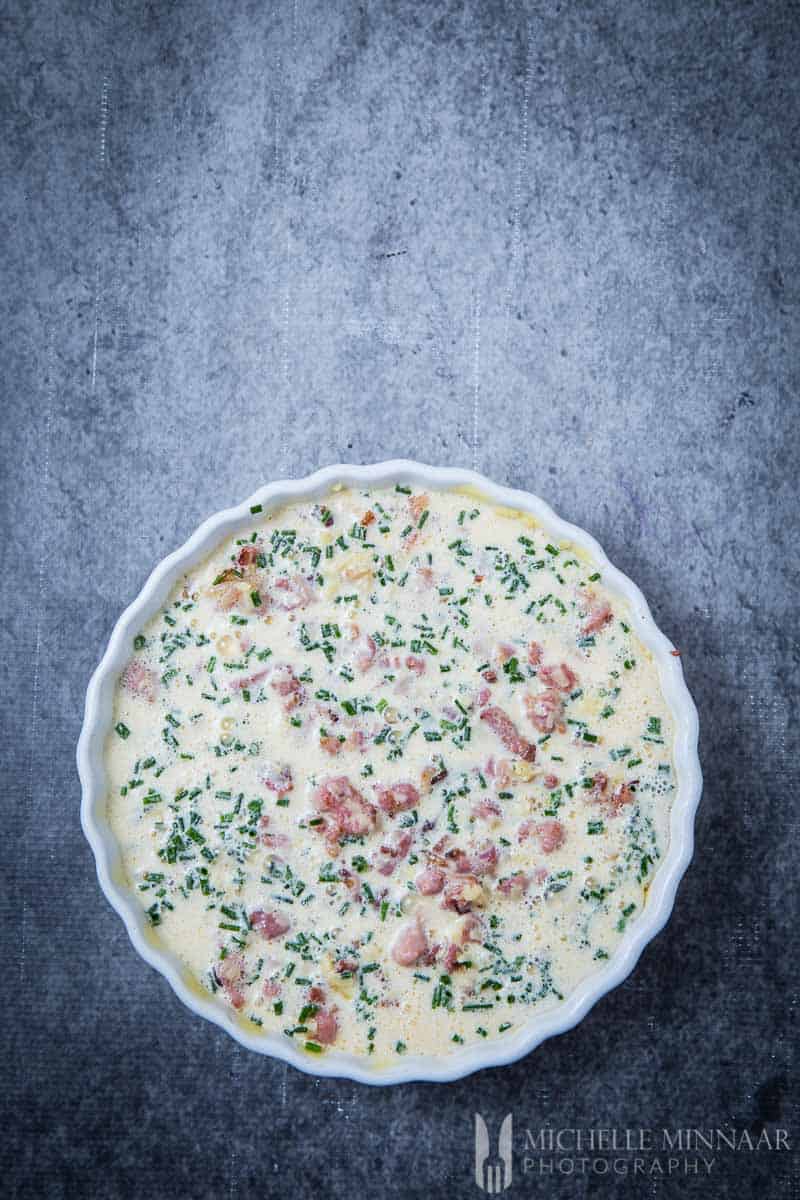 Its quite a filling meal, so in order to lighten it up it’s a good idea to serve souttert with a side salad or some green beans. If you don’t like to fuss too much around the kitchen, then this is the recipe for you. 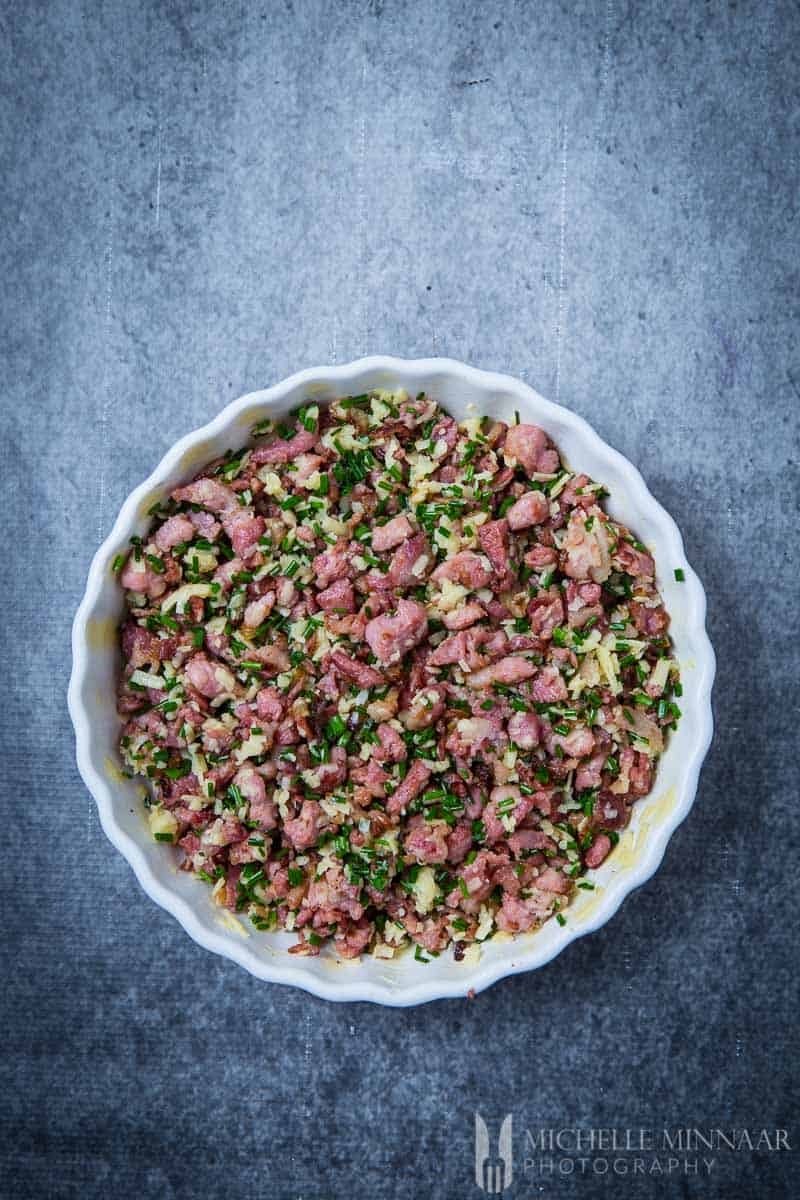 Souttert is a South African tart, made up of eggs, flour, whisked eggs and grated cheese. In a way it is like quiche from French cuisine. The actual meaning of souttert is ‘savoury tart’.

I’m not patriotic at all, but do I think that the souttert is nicer than the French’s version we all know as quiche. This is because the latter is quite eggy, rubbery and bouncy, whereas souttert glides more on the tongue.

Souttert has a higher milk and flour content, so it has a smoother bite. Also, in South Africa, we tend to pack more ingredients into the tart. 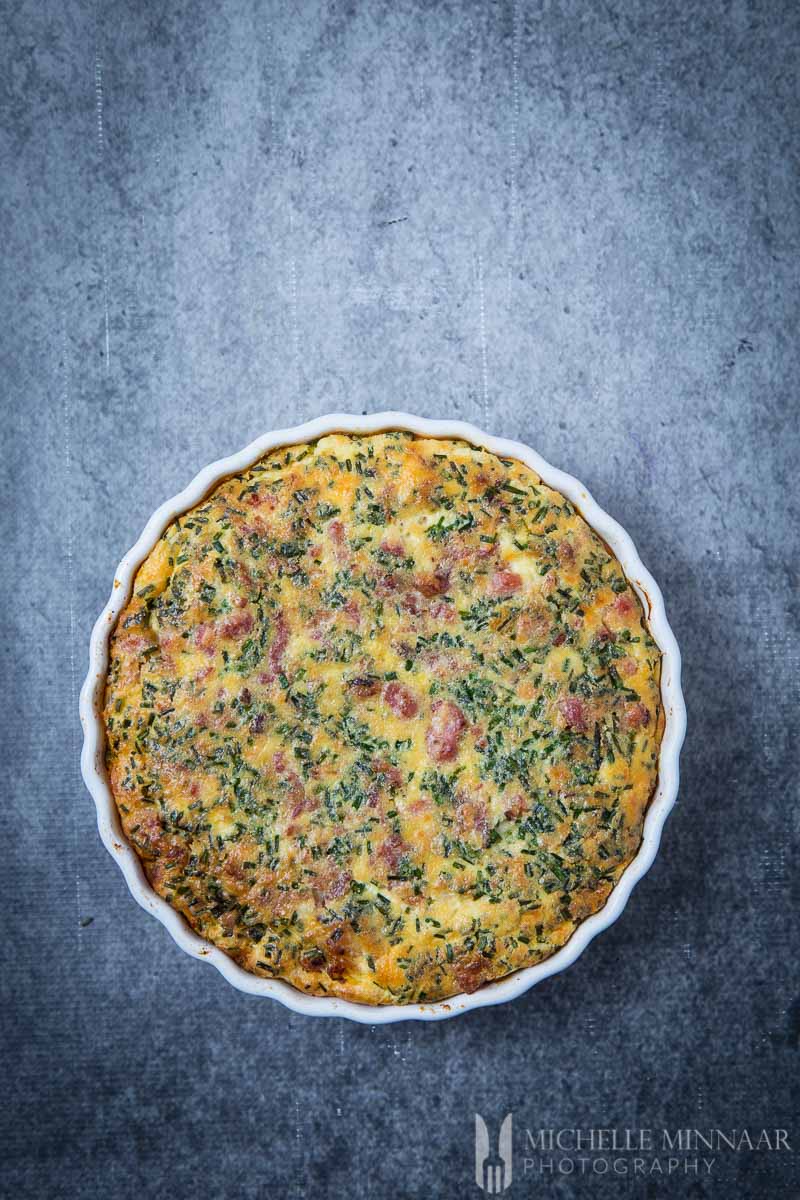 Here, they can sell their baked goods and this is one of their regular offerings. Other items include melktert, kondensmelkhorinkies, koeksisters etc.

Souttert is one of my favourites and it’s something I’ve missed since moving to the UK. Can you believe that it’s taken me this long to make it here in the UK?

Ah, the memories! I did however make recently a lovely denningvleis – another delicious and traditional South African dish.

So today, the ham en kaas souttert is evidence just how much South African cuisine was influenced by the French. 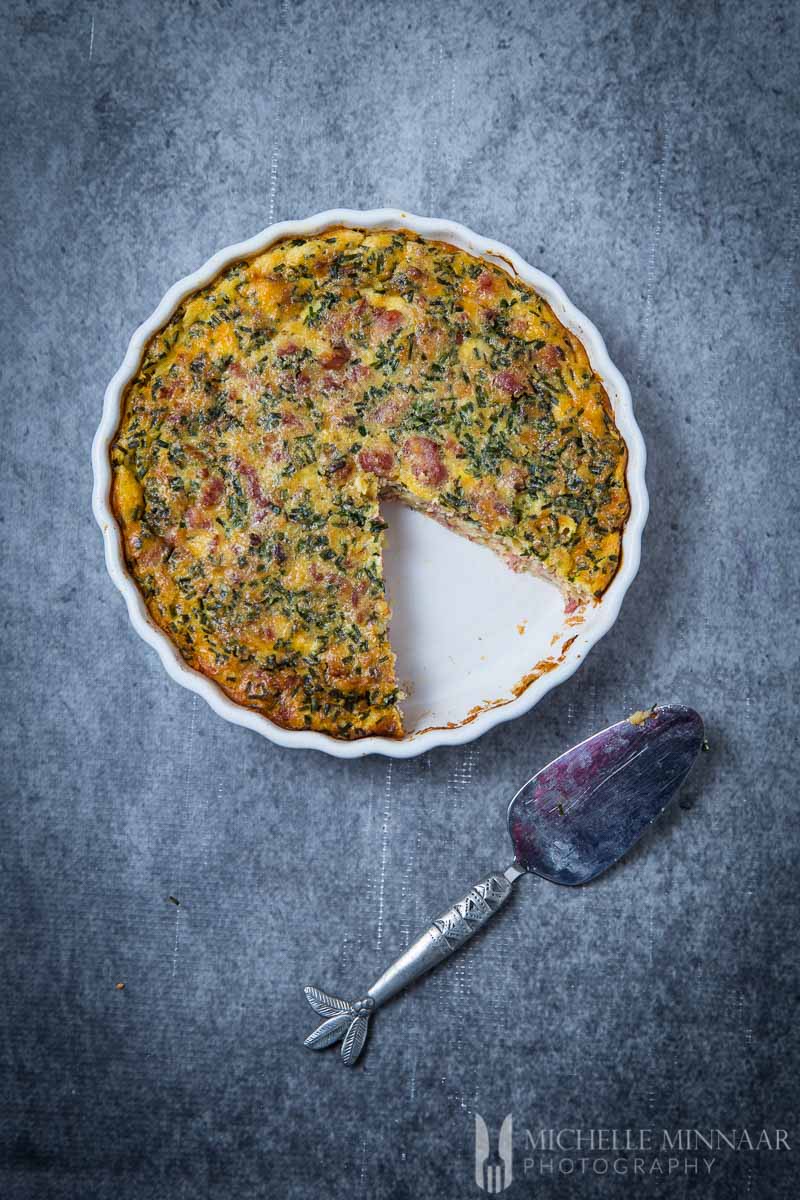 ‘Ham en kaas’ means ham and cheese. This is the classic combination that you will come across if you ever visit South Africa and try souttert.

I like to include spinach in any tart, so spinach with cauliflower or broccoli would be very healthy. In the end, you can make all kinds of flavour combinations. 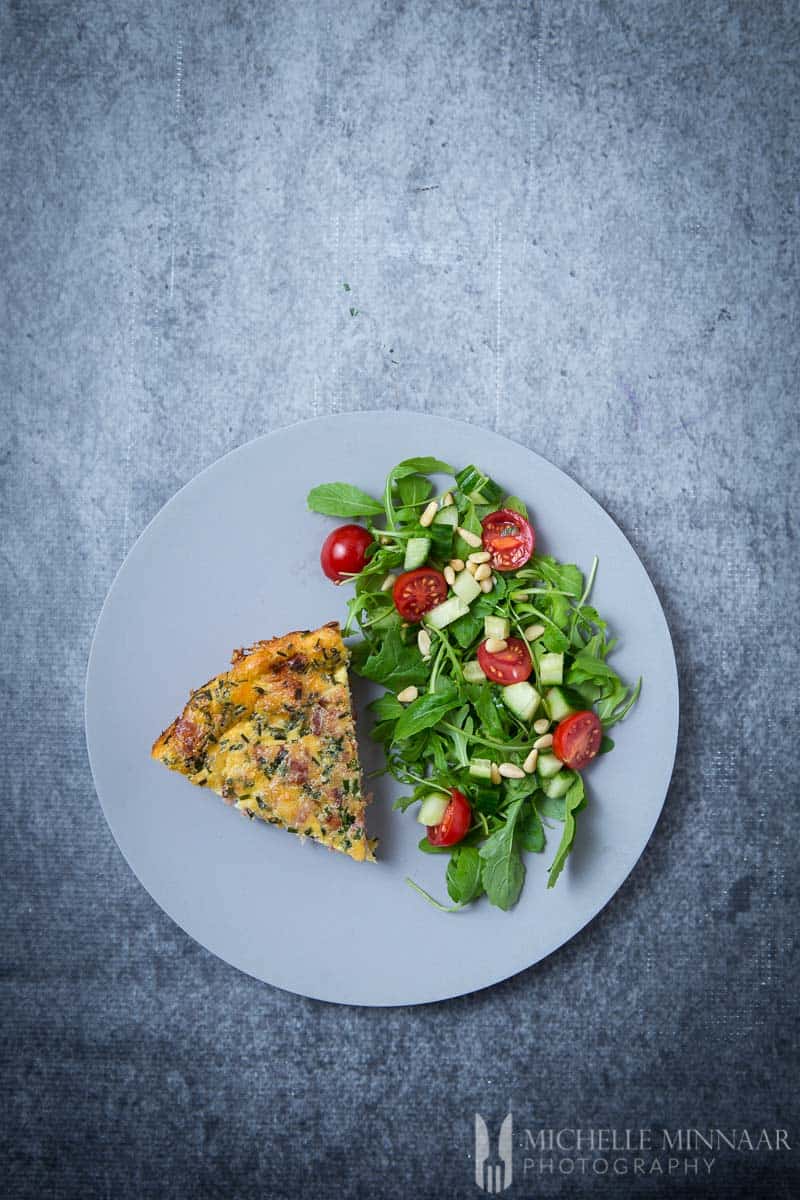 I’ll leave it up to you and your taste preferences. So, what flavour combination would you go for? Leave a comment below!

As the souttert is a rather heavy and filling meal, you’ll need something to cut through this richness. This could be a simple green salad as a side with an acidic dressing.

I also like to make a tomato salad with some olive oil. Generally, tomatoes are very high in terms of acidity, therefore they work well.

Just add a bit of basil or parsley and you’ll have a delicious side salad. Just have a look at how the French eat their quiche – simple salad with mustard dressing.

Souttert is traditional South African boerekos enjoyed by the Afrikaans community. Ham and cheese are used as a filling in this sout tert recipe but you can play with different ingredients.