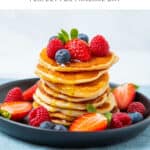 Ever heard of a crempog? In simple terms, crempog is a Welsh pancake recipe that has been around since the English Middle Ages. Hence, this is the perfect recipe to try, especially on National Pancake Day or Shrove Tuesday!

Here’s a list of the top products you’ll need for making any pancake recipe, including this crempog recipe.

A crempog recipe includes flour, buttermilk, eggs, salted butter and a touch of vinegar. It is a traditional Welsh recipe that you can find all over the United Kingdom.

Visually speaking, the pancakes are thick and are served stacked on top of one another with some syrup or fruit. They are absolutely irresistible. You have to try this recipe.

By the way, to make a truly authentic version of a crempog recipe, then go for this Welsh griddle. This way, you’ll be making the crempog recipe the right way.

How do you like to make your pancakes from scratch? Do you use a special type of frying pan, or do you use the ordinary one and just let the pancakes take on any shape they want? Let me know in the comments section below.

A crempog pancake or crempogau (in plural), are traditionally made on griddles or on bakestones. Believe it or not, it is one of the oldest Welsh recipes.

Nevertheless, the origin of the name of crempog is from a Bretonese word ‘krampouezh‘. Not surprisingly, this is also a type of pancake, but a lot thinner than a crempog pancake.

Actually, the krampouezh pancake is more similar to the French crepe pancake, which is almost paper thin.

In either case, since the crempog has been around for ages, it influenced other recipes such as the crumpet. Today, a crempog is served on celebratory occasions in Wales, birthdays, or on Shrove Tuesday.

Shrove Tuesday, in the UK as well as other commonwealth countries, is also known as National Pancake Day or Pancake Tuesday.

This day varies every year, since it takes places in the seventh week before Easter and a day before Ash Wednesday. Therefore, in 2020, Shrove Tuesday is on the 5th of March.

how to make a crempog

A crempog is actually quite inexpensive to make. It only requires your regular staples, such as butter, eggs, buttermilk and flour. In some versions, there is a dribble of vinegar, while it is absent in others.

It’s like with a cobbler recipe. Everyone makes their own unique version of it.

Again, some people also add raisins for extra flavour. Although, I have to say my kids aren’t the biggest fans of this addition. So, it’s completely up to you whether or not you would like to add the raisins or other dried fruit inside.

There is a way in which you can make a vegan version of the crempogau. First of all, instead of the buttermilk, use approximately 350 ml of water. Add 90 grams of fresh spinach, just remember to wash it first.

Next, mix in 250 grams of chick pea flour with 1 teaspoon of baking powder. Boom, with a pinch of salt, you’ve got the perfect vegan savoury pancakes.

If you would like to make a sweet version, just add 1.5 tablespoons of sugar into the spinach batter. It’s not the first time I’ve use vegetables to make a fantastic pancake recipe.

For instance, if you are into other vegan pancake recipes, you should check out my vegan sweet potato pancakes. They are so delicious, my kids keep asking for them all the time.

As for the toppings, you can consider the following ones with crempog. Let’s start with traditional toppings:

Of course, you can also consider other types of fruit such as bananas. I think they also work very well.

Try my other desserts as well, such as:

Other toppings which you can also opt for are:

Oh so many decisions. Either way, any type of topping will pair very nicely with a traditional crempog recipe. You’ll see.

How would you serve your crempog pancake recipe? Let me know in the comments section below!

Learn how to make authentic crempog, which is a traditional Welsh pancake recipe. Crempog or crempogau are thick pancakes, served in stacks.

Traditionally, crempog is cooked on a Welsh griddle.