×
You are here: Home / Reheating Food / How to Reheat a Burrito

Who doesn’t like a burrito? The combination of meat, rice, tomatoes, spices and sour cream, all wrapped up in a tasty tortilla.

But we all know burritos are best served warm. So, what if you a leftover burrito and it’s lost its heat. Have you ever wondered how to reheat a burrito?

Well, you’ve come to the right place. Reheating a burrito is easily done. In fact, there are several ways.

What you’ll need to reheat a burrito

Depending on the method you choose to reheat your burrito, you’ll need the following:

What is a burrito?

A burrito is a mouthwatering Mexican and Tex-Mex wrap. To make a one, you take a flour tortilla and wrap it around a variety of ingredients, including meat, rice and refried beans, with some spices added for extra zing. Sour cream and guacamole is often added to balance out the spiciness.

The tortilla itself is sometimes lightly grilled or steamed, to give it extra bendability. This makes sure the tortilla hugs all the filling and that everything stays together. There’s nothing worse than a burrito that falls apart!

The name burrito translates as “little donkey” in Spanish. One theory behind the name is that a burrito can carry a lot of different things all wrapped together, much like a donkey. Well, I like to think that’s where the name came from!

The traditional burrito has evolved across different cultures. A particular favourite in the US is the California burrito, which goes all out – it’s a gigantic flour tortilla filled with marinated spice rubbed steak, stuffed to the brim with Mexican street fries, cheese, sour cream and guacamole.

Can you reheat a burrito with guacamole? 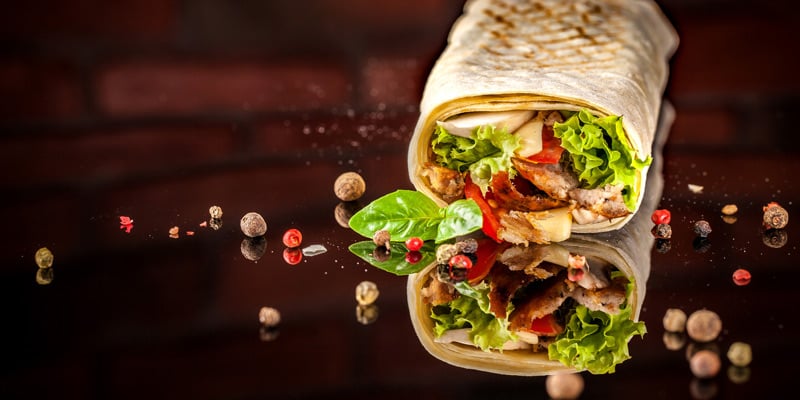 If you wondering how to reheat a burrito with guacamole and other salads, without affecting the taste, the best way is to unwrap the burrito.

Some ingredients in the burrito, like the meat and the actual tortilla wrap, need to be heated. Whereas the cold ingredients will lose flavor when heated. So, the best way is to separate them.

Once heated, you can add the guacamole and salad back into the burrito, then carefully rewrap it. It’ll taste as good as new!

Can you reheat a burrito with sour cream?

The same goes for sour cream. Heating it will taint the taste. It may seem like too much effort, but it’s so worth it.

Unwrap the burrito and, using a spoon, spoon out the sour cream from the filling. Once you’ve heated the burrito, simply replace all of the salad ingredients and rewrap your burrito. Easy!

Best way to reheat a burrito

If you’ve ever just thrown a burrito into the microwave, you’ll know that it’ll just turn into a soggy, messy, wet burrito. This is because the microwave heats the moisture inside the burrito, which ends up seeping into the tortilla.

The trick is to sprinkle water onto the tortilla before you put the burrito into the microwave. This way shouldn’t take more than 2 minutes to heat your burrito. Make sure you remove any foil before putting your burrito in the microwave!

A little spray of oil in a skillet is all takes. This method should take around 5 minutes.

If you want a crisp burrito that tastes as good as when you first made it (or bought it), reheat your burrito in the oven. It’ll keep its flavour and will gain a satisfying crunch.

In a toaster oven

Another good method, this will help the burrito to keep its texture and taste.

How to cook a frozen burrito

If your urge to eat a burrito takes over, and you’ll got a handy supply stockpiled in the freezer (homemade or a leftover burrito from Taco Bell), reheating frozen burritos takes less than 5 minutes in the microwave – just wrap each frozen burrito in a wet paper towel.

But if you want to know how to make frozen burritos taste better, you’ll need to take a little longer and cook them in the oven.

To cook it in the oven, preheat your oven the 400 degrees Fahrenheit. You’ll need to first wrap your burrito in foil, then place it on a baking tray on the top shelf of the oven. It’ll take around 40 minutes.

If you’re wondering how to cook a frozen burrito in a toaster oven, it’s simple. Wrap it in foil and place it in a preheated toaster oven (400 degrees Fahrenheit) and cook for 15-20 minutes.

If you want to know how to cook a frozen burrito on the stove, just microwave it for a minute, then transfer into a pan. Sautee in a lightly oiled pan until the tortilla starts to brown.

How to reheat a burrito in the microwave

How to reheat a burrito on the stove

How to reheat a burrito in the oven

How to reheat a burrito in a toaster oven