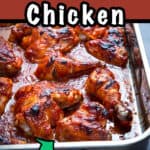 One can say that oven-baked barbecue chicken will always be the perfect finger food. Have you ever heard of finger food? I’m sure you have!

Finger foods are those types of yum yums, which you just can’t stop licking off your fingers. If you are a foodie and you’ve got a man at home, oven-baked barbecue chicken is exactly for you.

Even though the climate doesn’t allow us to sit outside and enjoy a lovely barbecue in the garden, we can still indulge on the delicious barbecue flavour from the oven-baked barbecue chicken.

Get a head start on the barbecue season and set the trend in your neighbourhood. You’ll soon find neighbours bringing pints over to your house.

BBQ, short for barbecue, is a cooking technique that usually involves slowly cooking an ingredient over open fire. Today’s definition of a barbecue involves a couple of friends and pints of beer.

You can consider using a fixed grill or a portable grill. Either way it gets the job done. The main thing you’ll get out of the barbecuing technique is the presence of the delicious smoky flavour that just lasts throughout each bite.

In fact, in some cultures, barbecues are used to preserve meat, as a result of the smoke. Nowadays, people usually associate barbecues with marinating their chosen ingredients.

Where did it come from?

So, when and where did barbecuing first show up? There are debates whether one should credit barbecues to cowboys in the West (USA) or to the Caribbean.

It’s a very tough discussion, as you can argue that surely the early Greeks “barbecued” their meat too. What do you think – when and where did it start?

Every single time I shut my eyes and think of oven-baked barbecue chicken, I think of TV ads from the US. I know that it’s not just a fourth of July type of thing, we Britons can proudly call ourselves experts in barbecues.

There is an American stigma to barbecues. Do you agree? Nevertheless, this recipe calls for an oven, not an actual barbecue. If you’ve got a barbecue – fantastic! Put it to work!

If you want to save money, buy the entire chicken or two. Cut the chicken into sections and keep the carcass for chicken soup. Throw in a couple of veggies, season well and you’ve got yourself two amazing dishes!

Clever and economical at the same time. If you don’t have chicken sitting in the fridge, no worries. You can substitute easily with:

Nonetheless, beef still remains my favourite substitute for the oven-baked barbecue chicken. It doesn’t really matter what you use as long the sauce is tasty.

Do you prefer eating vegetables to meat? That’s absolutely fine. In fact, this recipe can be vegetarian-friendly very easily. Just use vegetables instead of meat.

First, it contains less calories per serving. Second, it will cook faster, unless you get a huge piece of corn. Then it takes roughly the same amount of time.

Third, you can eat totally guilt free! The vegetables you can consider using are:

You can use so many different varieties of vegetables. I like to choose “finger veggies” for barbecue inspired recipe. Thus, corn is my favourite substitute for the oven-baked barbecue chicken.

Simply mix all the ingredients together. The trick is in the ketchup. The higher quality ketchup you use, the more delicious your sauce on the oven-baked barbecue chicken will be!

I like to use bio or organic ketchup, it’s less sweet and tastes more of tomatoes. You can try including an alcohol base to the sauce.

I’ve come across a lot of suggestions of putting whiskey and honey in the barbecue sauce. Would you do it?

I’ve also heard of putting beer into the sauce, for that nice bitterness. Apparently, it works well. If you want to try something completely new, why don’t you go for making paprika-honey-oregano marinade?

Once you finish making the sauce you can marinate your chicken in it. The longer you marinate, the better the chicken will taste.

Not sure about you but, I myself am pretty impatient to marinate. I don’t plan ahead too much, and I struggle to marinate for long.

What I usually do is to marinate my ingredients in the fridge overnight. It pays in the end! If you own a grill, just dip the chicken into the sauce and let it cook!

Or, in this case, let it smoke. Don’t be afraid to marinate the chicken longer. You can even do two days.

Alternatively, you can brine the chicken the day before for extra succulence.

You can just serve the oven-baked barbecue chicken as it is. It’s finger-licking good, so why add anything to it? It’ll just distract you from the delicious chicken.

However, this is only under the assumption that you made enough for yourself. If you have guests or need to share, its best to serve the oven-baked barbecue chicken with a side.

You can consider a cherry tomato salad  or a beautiful smashed cucumber salad. Eating meat can be quite heavy. Eating a light side will freshen you straight up for another piece of oven-baked barbecue chicken.

If you want to go all in, then go for the obvious fries! As you can see, I’ve made plenty of sauce which can be poured into a bowl for dipping.

Once you take the chicken out of the oven or off the grill, sprinkle some fresh coriander on top. It will add even more freshness.