I’m sure you’ve had the opportunity once or twice in your life to sample some savoury French toast. Maybe more than once? 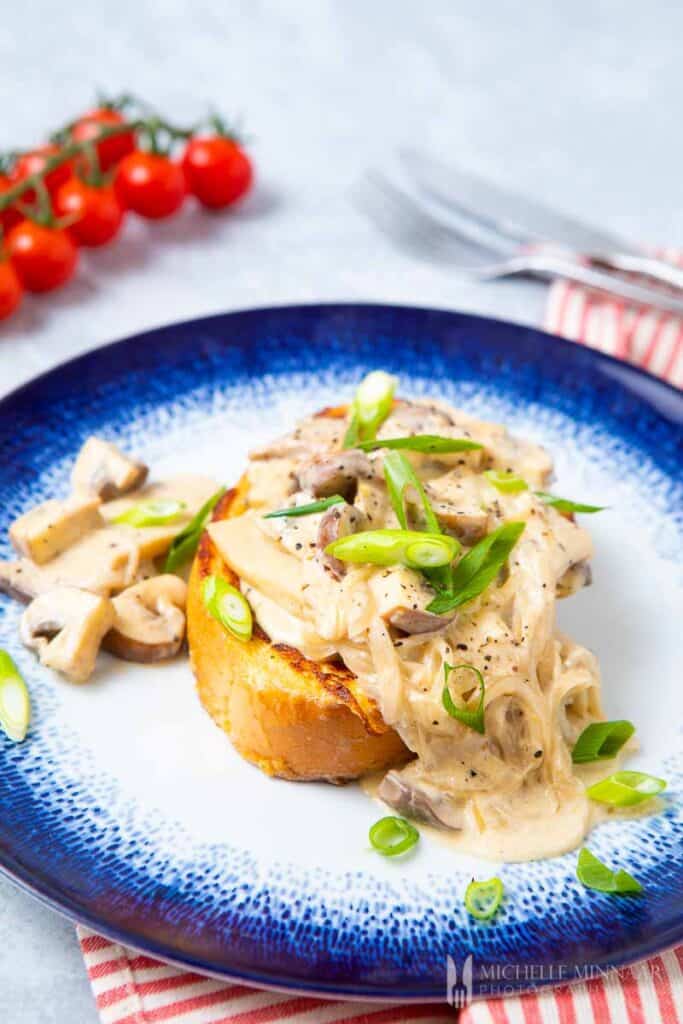 Naturally, when one thinks of French toast, one tends to associate it with whipped cream, strawberries and the like. Of course, my mind also wanders to the sweet side.

I believe that every parent should learn how to make an easy savoury French toast recipe. Simply because it is super-easy to make. Plus it’s filling. It’s a fantastic way to prepare something quick, and kids tend to love this recipe. Try it!

French toast calls for never ever throwing away stale bread again. Originally, one would soak the stale bread in milk and eggs and fry it in oil or butter.

There are many versions of French toasts, both sweet and savoury. However, one of my favourites is to make this savoury version with mushrooms, making it slightly more sophisticated.

So, don’t throw away any stale or leftover bread! Reuse it and make a delicious French toast. Remember to serve the toasts hot!

why is it called French toast?

First, let me make it clear – French toast is not French. Simply put, there have been many names associated with French toast. In summary, these include:

Similarly, the reason why it is called French toast, or pain perdu (in French) is because it reflects the state of the bread.

Regarding the origins of savoury French toast, it dates all of the way back to the 4th century. Back then, people described it as aliter dulcia, which translates to ‘another sweet dish’. In essence, history suggests that the first versions of French toast were sweet. It was often served with honey.

Over the centuries, French toast and savoury French toast recipes made their way throughout Europe. For this reason, the recipe has so many different names. 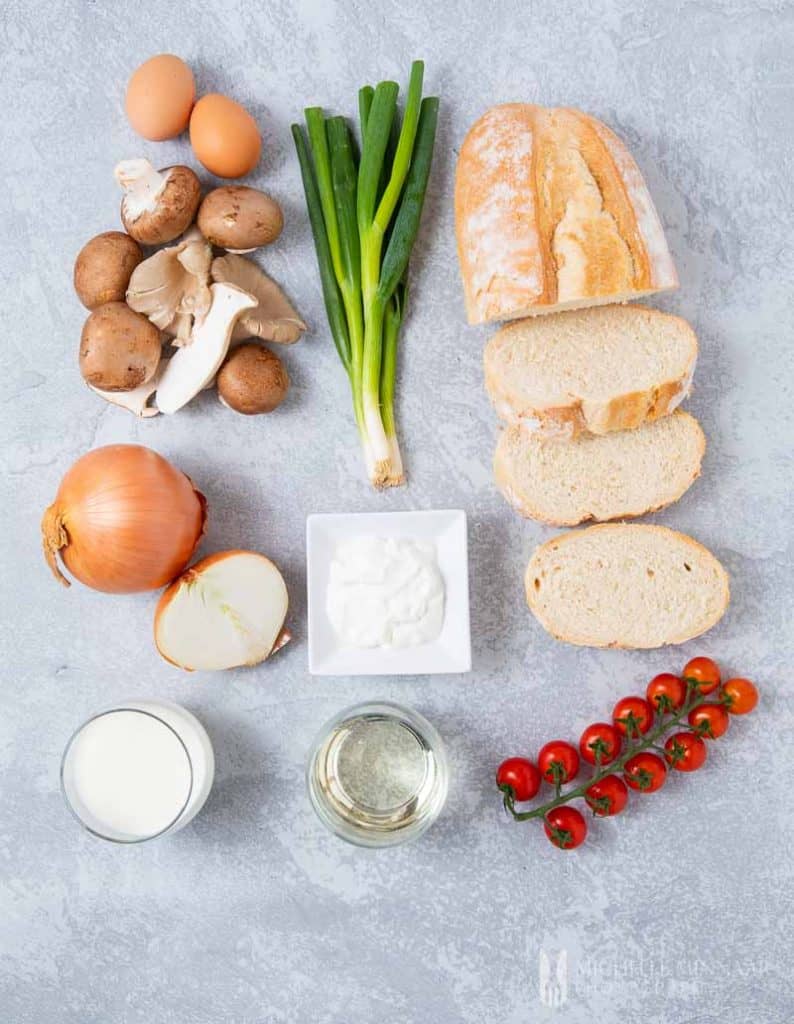 First of all, the trick to making this an amazing savoury French toast recipe is… the butter. Fry the toast on a large chunk of butter (you can use salted). However, you can also consider frying it on olive oil or coconut oil. You can also use ghee.

Similarly, you can reuse the above-mentioned oils or butter when you fry off your mushroom. In my opinion, butter and mushrooms are a heavily suited combination. Just add your favourite spices or herbs. Feel free to use fresh rosemary, which will add a lovely complexity to the savoury French toast. Keep on reading to find out which other toppings you can consider. I have a million idea for savoury as well as sweet versions of French toast.

Next, once you are done with the toppings, consider shredding some cheese. For example, I recommend shredding some parmesan as the perfect finishing touch. It’s like eating pasta, I could never eat a pasta dish without the cheese on top. Do you agree?

In summary, her version is completely sweet. She calls it ‘British French toast’. Not only does she explain how eating toast is perceived in Britain as a morning dish, she also adds some very interesting ingredients into her egg mixture.
These include:

In addition, she also recommends maple syrup – no surprise there I suppose. Lastly, as a topping, she adds a lovely marmalade.

So, there you have it. Nigella inspired me to also try this sweet version in the future.
Click right here to learn how to make homemade marmalade.

If you feel inspired in an Indian direction, then I recommend adding typical Indian spices into your egg mixture.
Try:

It will result in a curried Indian savoury French toast. Quite the twist isn’t it?

In summary, here’s just a few ideas you can experiment with. I am sure you will find your favourite topping.

For the Savoury French toast 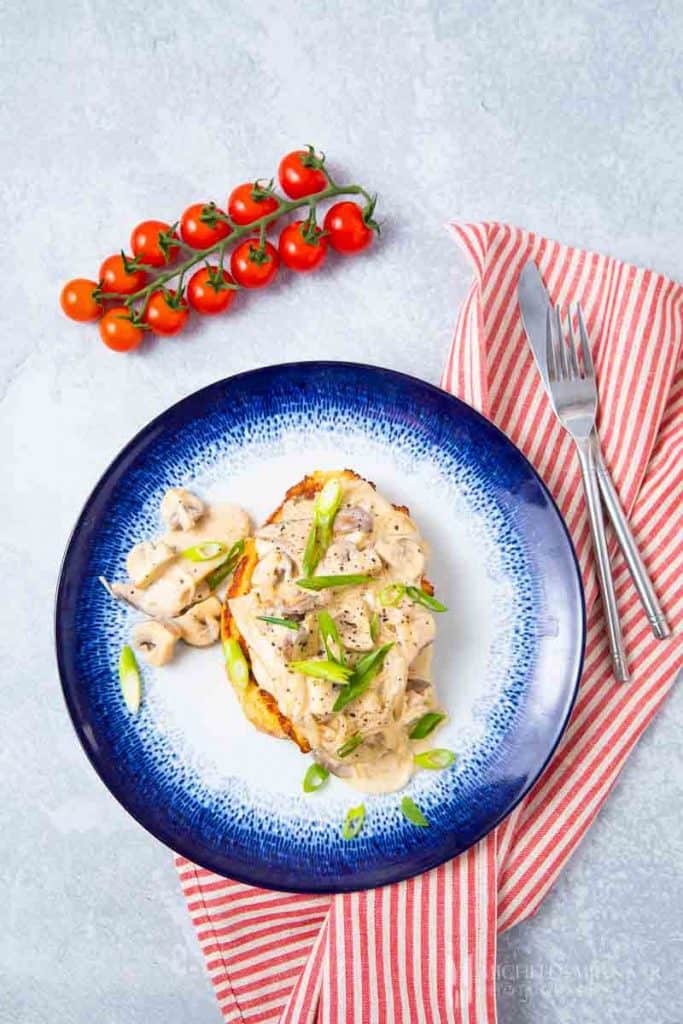 For the Sweet French toast

In essence, if you would like to double up on the portion size, then you can make a sandwich out of savoury French toast.

Also, for sandwich filling ideas, take at look at some of my popular sandwich recipes:

Lastly, you can make your French toast sandwich your own. As you can see, you can decide whichever filling fits your taste buds best!

So, which version of savoury French toast will you go for? Or will you change it up completely and go sweet instead? Let me know in the comments section below!

Make this amazing savoury french toast for brunch, breakfast, lunch, dinner, whatever! It is so easy and simple, you’ll want to make it every day. Enjoy!