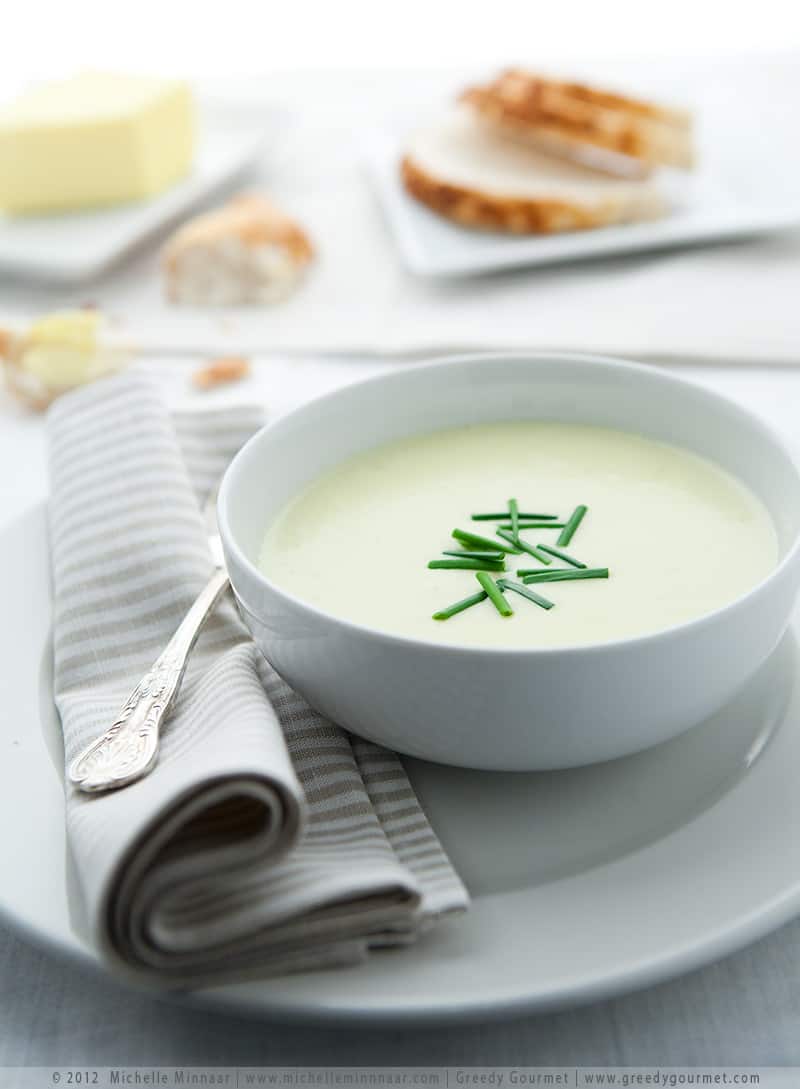 Hands up – do any of you worry constantly whether your children are eating a balanced diet? 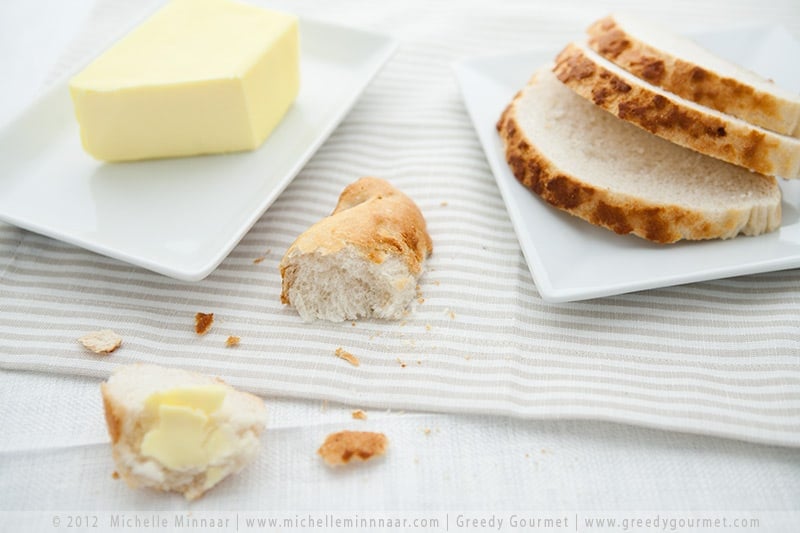 Since Robyn is still quite receptive to new foods I’m not as concerned but Gabriel, the super fussy eater in the house, is a whole other kettle of fish. Through lots of trial and error I discovered he likes smooth soups and butternut squash soup is his favourite. When there are no butternuts lying around I make them leek and potato soup. For added fun factor I serve the soup in cups with straws which intrigue them immediately.

Leek and potato soup is not just for children though! The leeks lend sweetness to this hot, hearty and robust soup. In the summer months it can be served cold and is then known as Vichyssoise. The French, the original creators of this dish, know it as Potage Bonne Femme. 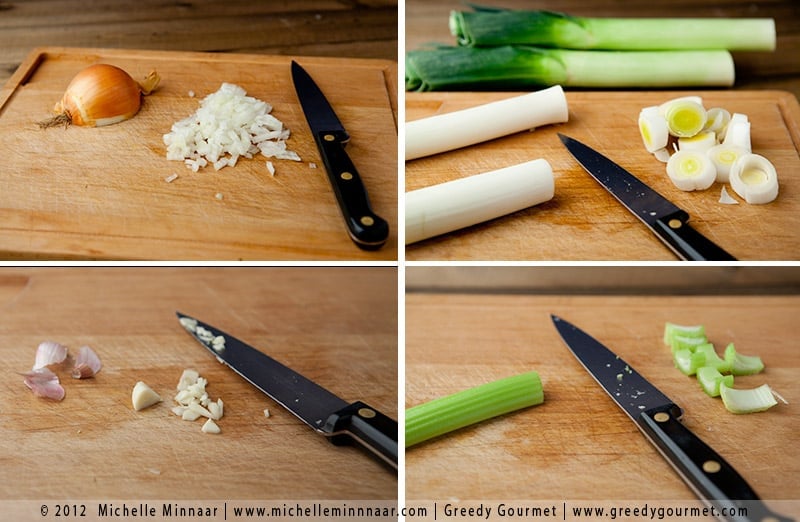 Leeks are rich in folate, vitamin C, potassium, calcium and phosphorus. Just like leeks, potatoes contain vitamin C and potassium, but also five out of the eight B vitamins and other minerals. What I’m trying to tell you is that this soup is good for you! 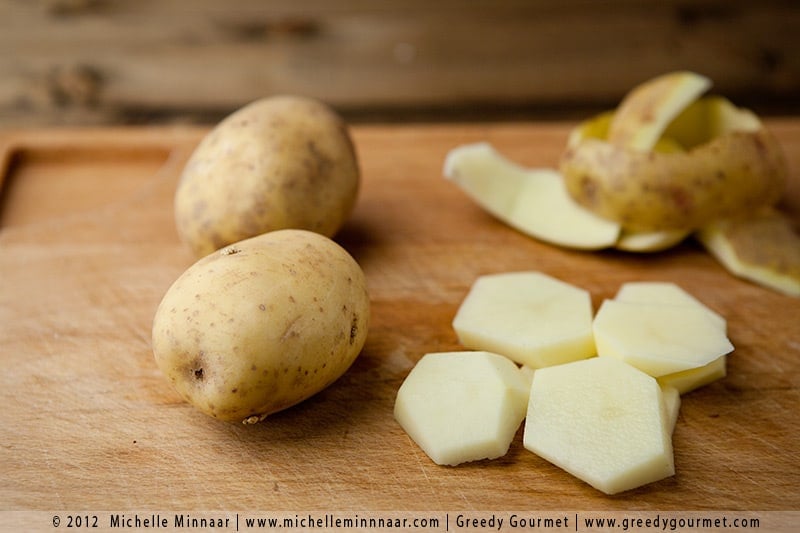 If you looked at the recipe below you’re probably yelling at the screen right now. How can all that loads of butter and cream possibly be good for you? If you ate it on a daily basis, it probably isn’t. The original recipe is for special occasions when you have guests over or simply want to please yourself if you’re in desperate need of some comfort food. Of course, the beauty of cooking is that all recipes can be tweaked. Here’s how to make it healthier.

Leave out the butter and use low fat cooking spray to fry the onion, leek, celery and garlic. Omit the double cream and add a total of 1 litre (4 cups/almost 2 pints) of stock to the vegetables. 1 ProPoint per serving!

Use vegetable stock instead of chicken stock.

Follow the vegan route above and use gluten-free stock cubes.

Leave out the garlic, stock, salt and cream. Boil the vegetables in 1 litre (4 cups/almost 2 pints) water instead.

Just Lighten It Up

Don’t want to use double cream? Why not substitute it with something healthier instead? For example: single cream, crème fraîche, milk, skim milk, stock or water. 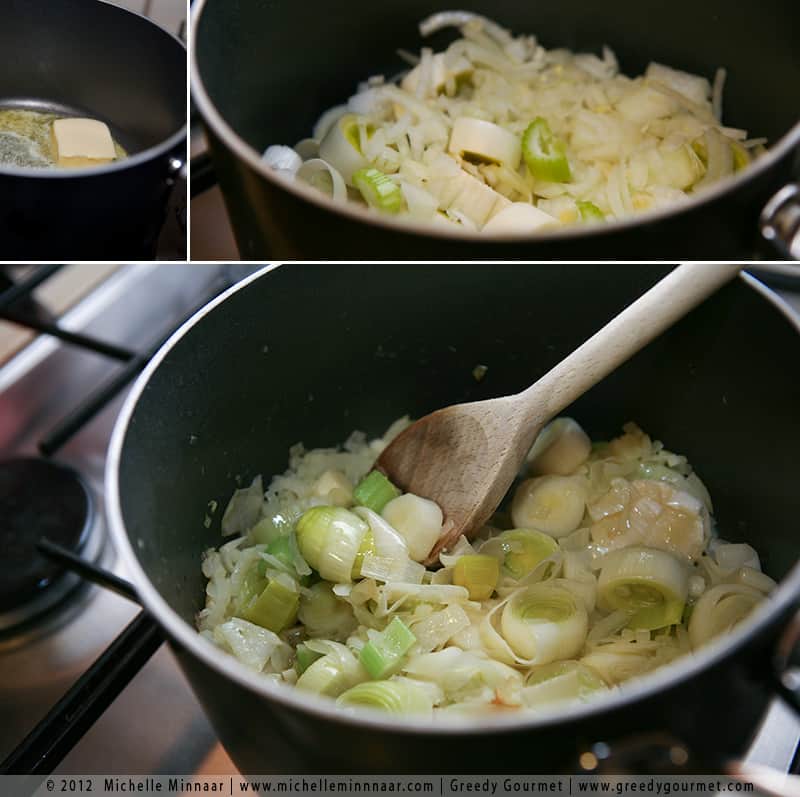 How long will it keep in the fridge?

Two days at most.

Can I Freeze Leek and Potato Soup?

Yes, BUT don’t add the cream to the soup until after it has thawed and been reheated.

How To Spice Up Your Leek and Potato Soup

Chances are you will like this soup so much that you’ll make it again and again. Here are two ideas to spice it up: 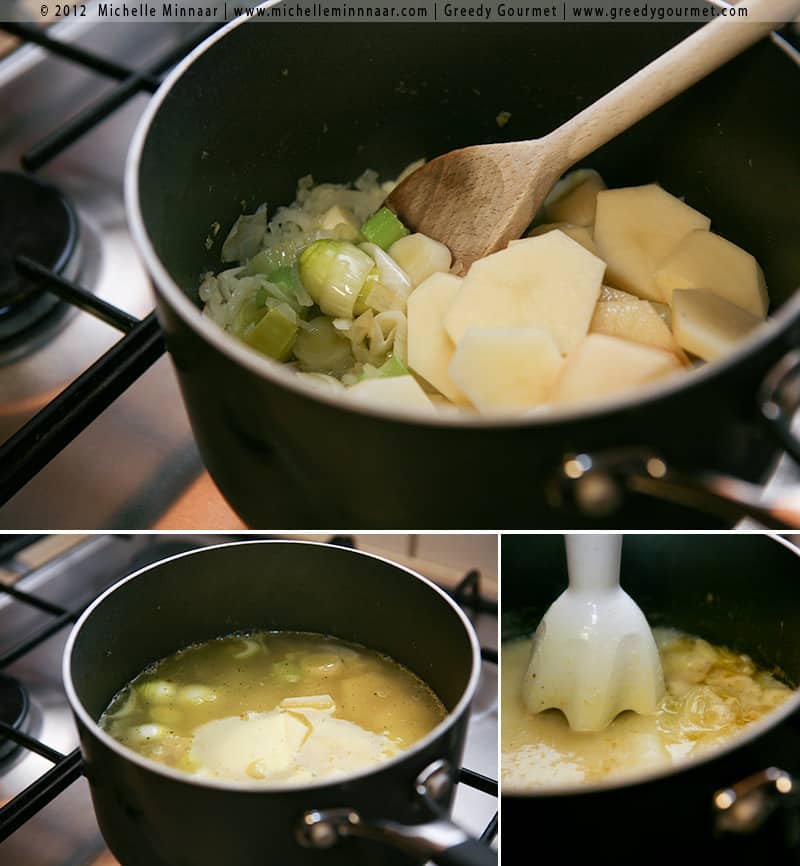 Did I hear some men grumbling in the background? Oh, right. There’s no meat in this soup. Well, we can fix that! Here are some other variations with meat and other interesting twists on this recipe.

Heat a large, ovenproof pot over medium high heat. Add 5 slices of back bacon and cook until crisp. Remove with a slotted spoon, crumble and set aside. Carry on frying the vegetables in the bacon dripping, instead of butter, and follow recipe below. When soup is blended, add the crumbled bacon on top.

Leek and Potato Soup with Bacon and Chicken

Exactly the same as Bacon, Leek and Potato Soup recipe above but you can add 200-300g of shredded cooked chicken in the end.

Before blending the soup add 100g (4oz) of blue cheese, such as Cashel Blue or Stilton, to the soup. When soup is served sprinkle another 50g (2oz) on top. If using a stronger blue cheese such as Roquefort or Gorgonzola use slightly less; about 100g (3oz) in total.

While the soup is simmering, take a large bunch of continental parsley and remove the large stalks. Bring a pan of water to a boil and blanch the parsley in this for 1 minute, then refresh by immersing in cold water. Add the cooked parsley to the soup and liquidise.

Add a pinch of nutmeg to the sweating vegetables. While the soup is simmering, blanch 500g (1lb) of spinach in a pan of boiling water then refresh by immersing in cold water. Add the cooked spinach to the soup and liquidise.

Follow the recipe and when the soup has finished cooking add 4 bunches of watercress. The latter will wilt and then you can blend the soup.

Drop a few leaves into the leek and potato soup base about halfway through cooking, then blend.

Follow the recipe and when the soup has finished cooking add 4 big handfuls of rocket. The latter will wilt and then you can blend the soup. Hard stalk may need to be removed beforehand. 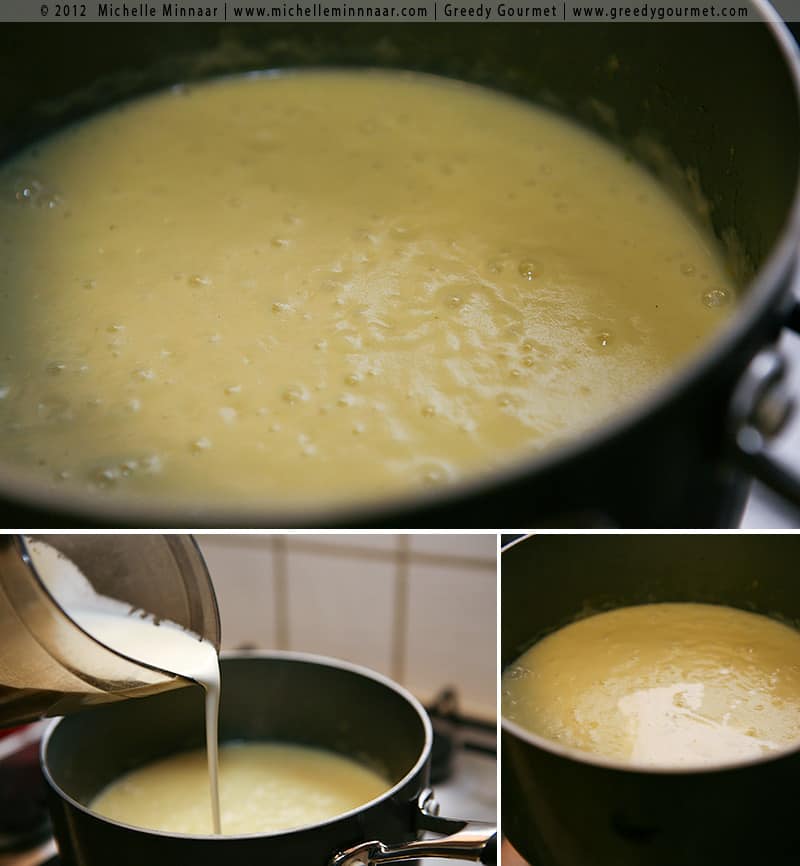 What to serve with Leek and Potato Soup

Still not satisfied? Well, toast 8 slices of baguette, top them with oodles of grated Gruyère cheese and place under a preheated grill until the cheese melts. Tada!

What a great comfort food in the winter yet light and healthy lunch in the summer. Perfect for matching to a crisp white wine and why not consider putting a splash into the soup whilst it’s cooking too?

Cheverny is made predominantly from the Sauvignon Blanc grape, better known for producing Sancerre and Pouilly-Fumé just down the road. The wine is really clean and fresh with a character of wet earth, lime zest and grapefruit that works perfectly with leeks of any description. The texture is smooth and light so compliments the soup beautifully. Buy it here. 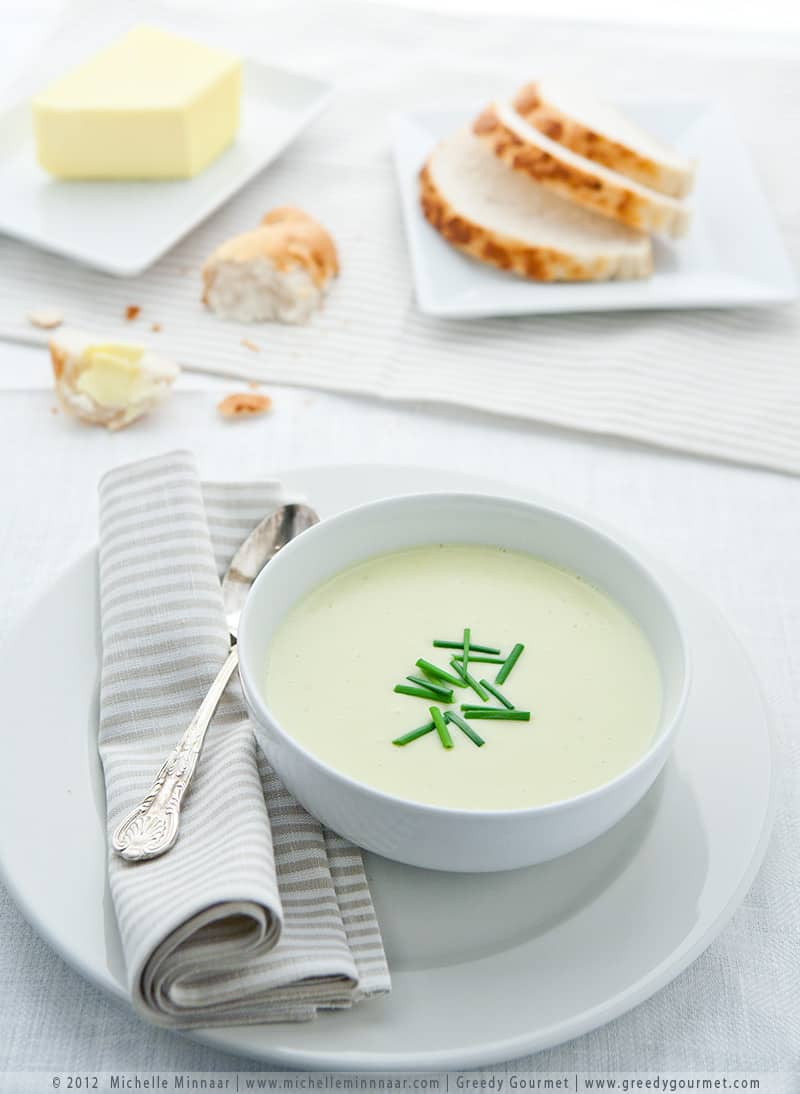 The ONLY recipe you will ever need for Leek & Potato Soup. Special diets friendly and lots of variations included.