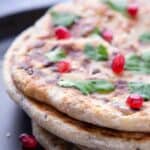 One of the all-time great naan recipes, Peshwari naan is perfect for lovers of Indian cuisine.

Made with a delicious combination of flavours, this Peshwari naan recipe is so much fun to make! It’s short on prep time and big on taste. So, whether you’re a master baker or a keen novice, this one’s for you.

A good Peshwari naan should be light and fluffy in texture and full of a beautiful subtly sweet, nutty taste.

If you love to bake and you’ve never tried to make naan breads, you’re in for a treat. For naan newbies, a Peshwari naan recipe is definitely a great place to start – it’s such a versatile dish and works great in both a sweet and savory way.

The sweet Peshwari filling in this naan is a mixture of sultanas, pistachios, desiccated coconut, sesame seeds, mango pulp and melted butter, with a little dash of cream.

This makes these Peshwari naans perfect as a subtly sweet snack, with their nutty and fruity undertones.

Think about it though. Each of those ingredients also go well with savoury flavours. That’s what makes Peshwari naans absolute dynamite on the side of a spicy curry.

If you’re after a compact yet powerful food processor, you can’t get better than the K-Mojo DigiMaster.

This thing combines style and substance – it’s got a nice elegant design, meaning it’ll slot into any modern kitchen. It’s also so quick and easy to use – you’ll wonder how you coped without it!

It’s extremely versatile, with an attachment for just about everything you could possibly wish to whizz, chop, slice, cream or knead in the kitchen.

For this Peshwari recipe, I used the knead attachment. Normally, I find kneading the dough quite a chore. It can be such hard work on the hands. This little gizmo takes on all the work and makes it look easy.

So much power and so much control, giving me super smooth dough in a mere few minutes. It’s nice to be confident that the dough is properly kneaded. This is absolutely crucial if you want to end up with soft, fluffy and light naans.

How to Make Peshwari Naan

There are a few steps involved when making this recipe. It’s not too complicated though – try it once and you’ll be well on the way to mastering this Peshwari naan recipe.

First, you make the dough. The dough is a mixture of flour, milk, Greek yoghurt, sugar, salt, a beaten egg, baking powder and some Nigella seeds.

This is whizzed up in your K-Mojo Digimaster for about 5 minutes to form your naan dough. There’s no need to knead manually with this bad boy!

Once your dough has had enough time to rest, you’re ready for the fun part. After you divide the dough and roll into 8 little naans, you’ll spoon the filling in the middle of each. Then you’ll fold, seal and roll the dough.

Now you’re ready to fry these bad boys on a high heat. Cook for 1 minutes on each side, so the total cooking time is around 2 minutes.

Check below for the full recipe and instructions.

If you’re a bit of a sultana fiend like me, hold back a third of them (so, around 25g[1oz]) when you’re adding everything to the K-Mojo Digimaster.

Then, simply mix together with the blended filling. You’ll have delicious juicy whole sultanas in the filling mix, for little sweet explosions of flavour with every mouthful.

The origins of naan bread stretch back as far as 2,500 years ago. Like all good dishes, it started with an experiment, after yeast was brought to India from Egypt.

The recorded use of naan can be found in the writings of Indo-Persian poet Amir Kushrau. Later on, during the Mughal era in India, it became known as ‘naan.’.

Due to its specific kneading technique and the use of yeast, naan was reserved for the upper crusts of Indian society – mostly the royals.

In fact, naan served with meat was the breakfast of choice for royals in India during the 1500s and 1600s.

If you want to put a vegan spin on this recipe, all you need to do is swap a few items.

Instead of using Greek yoghurt in the dough, use full fat coconut yoghurt. You should be able to get some at most good supermarkets, vegan specialist stores or online.

Replace the milk called for in this recipe with almond, rice, soy or coconut milk. Instead of using a beaten egg, replace normal flour with bread flour and add a teaspoon of yeast.

You can leave the single cream out of the filling mixture. It’ll still taste absolutely divine!

What is Peshwari Naan?

As naan is so popular in India, you’d think the word would have originated there. In fact, the word ‘naan’ comes from nān, a Persian word that means ‘bread.’ The word Peshwari comes from the Pakistani city Peshawar.

Don’t worry though, you don’t need your own tandoor oven! For my Peshwari naan recipe, you’ll cook the naans in a cast iron frying pan or nonstick frying pan. You’ll end up with naans that taste divine!

What is Coconut Naan?

The term ‘coconut naan’ normally refers to a Peshwari. There are some people who make a simpler recipe, with just a few elements.

What is Keema Naan Made of?

As with most naans, with keema it’s the filling that counts. The word ‘keema’ means minced meat in Urdu.

That explains why these soft, fluffy naans are filled with beautifully curried meat – a traditional recipe calls for lamb or goat – as well as potatoes, peas, ginger, chilli, onions, garlic and and garam masala spices.

How Do You Make Naan Bread Extra Tasty?

The secret to extra tasty naan bread is simple. Before you cook them, you need to brush each naan with ghee. They’ll end up a beautiful golden brown colour.

Ghee is a big part of any Indian recipe. It’s basically melted butter that’s had the milk solids removed. Then, you’re left with liquid fats.

As ghee is melted butter that’s had the milk solids removed, it means it contains less lactose than normal butter. It also means it has a much higher melting point than butter and typical cooking oils. This makes it perfect for Indian cooking, much of which is done on a very high heat.

Ghee has a wonderfully rich, nutty flavour. That’s why it’s often at the top of the ingredients list of authentic Indian curry recipes. It’s also why, when you brush it on naan breads, they end up so ridiculously tasty!

What are the Different Types of Naan?

Naan breads come in lots of different shapes and sizes, with many different fillings too. Here are just a few:

What Goes with Peshwari Naan?

With its sweet, spicy, nutty and fruity taste, Peshwari naan is wonderfully versatile. Eat it with a cup of chai and you’ll be in heaven. Still, serve it on the side of a curry recipe and your tastebuds will hit overdrive.

Competition Question: What bread will you make with the K-Mojo Digimaster?

What makes Peshwari Naan special is the bread’s fruity coconut filling. Instead of using a tandoor oven you can make it at home in a frying pan.

For a slight tweak on the filling recipe, you can place all the ingredients, except a third of the sultanas in a food processor and blitz until a paste forms. Stir in the remaining sultanas and proceed with the recipe.