This sopapilla cheesecake is a creamy and delicious! If you are a fan of sopapilla pastry, you are going to love this cheesecake recipe. It consists of different layers, which ultimately gives the cheesecake a different flavour in every bite. The top layer is a crunchy cinnamon layer which complements the cheese filling and the sopapilla base perfectly. You can even opt to omit the cinnamon layer, if you wish, and add a fruity layer instead. I understand that not everyone is a massive fan of cinnamon, but don’t despair. Otherwise, you can decorate the sopapilla cake with fresh fruits, as I did in my stunning sugar free angel food cake recipe.

Keep reading to find out more about sopapilla cheesecake. You’ll also learn tips and tricks for making the best and smoothest cheesecake fillings. Lastly, I will detail what sopapilla pastry is and provide a list of suitable alternatives. 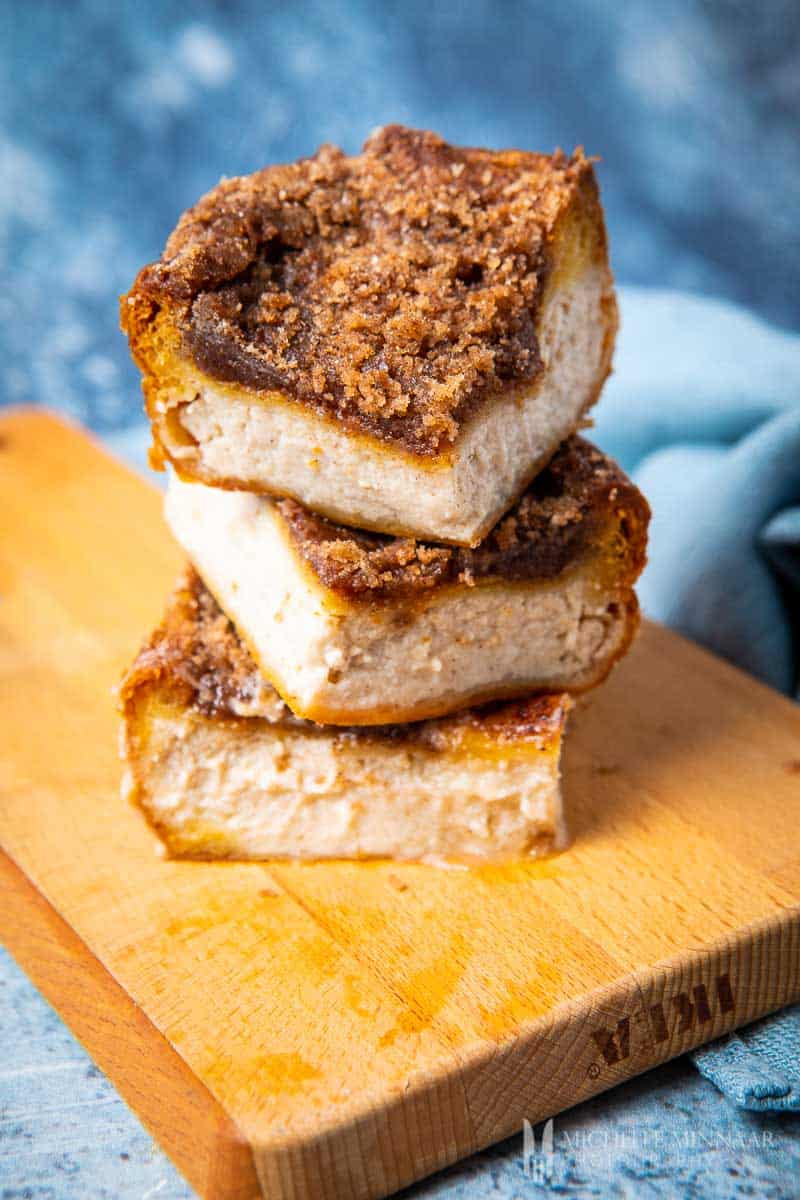 Looking at this recipe, you can easily mistake it for a pie recipe. Ordinarily, a cheesecake is circular and is enjoyed in delicate slices. Well, this sopapilla cheesecake recipe resembles a pie in two ways.

In short, sopapilla is a type of fried pastry, generally served in South America, with its strong Spanish heritage and cultural influence.

The term “sopapilla” is derived from the Mozarabic term “Xopaipa”, which translates to bread which is soaked in oil.

Generally speaking, it’s made out of leavened wheat dough. This means that the dough is actually a mix of traditional wheat flour as well as masa harina and some butter. To learn more about masa harina and the best masa harina substitutes, click here.

Once the dough mixture rises, the dough is rolled out in a sheet from which you can cut out circular, triangular or square forms.

Next, those shapes are deep-fried in oil, which allows the sopapilla to puff up. You’ll know you have the perfect sopapilla, when your centre has a hollow pocket. Of course, you don’t have to make them from scratch to complete this sopapilla cheesecake recipe. You can buy them.

where to buy sopapilla 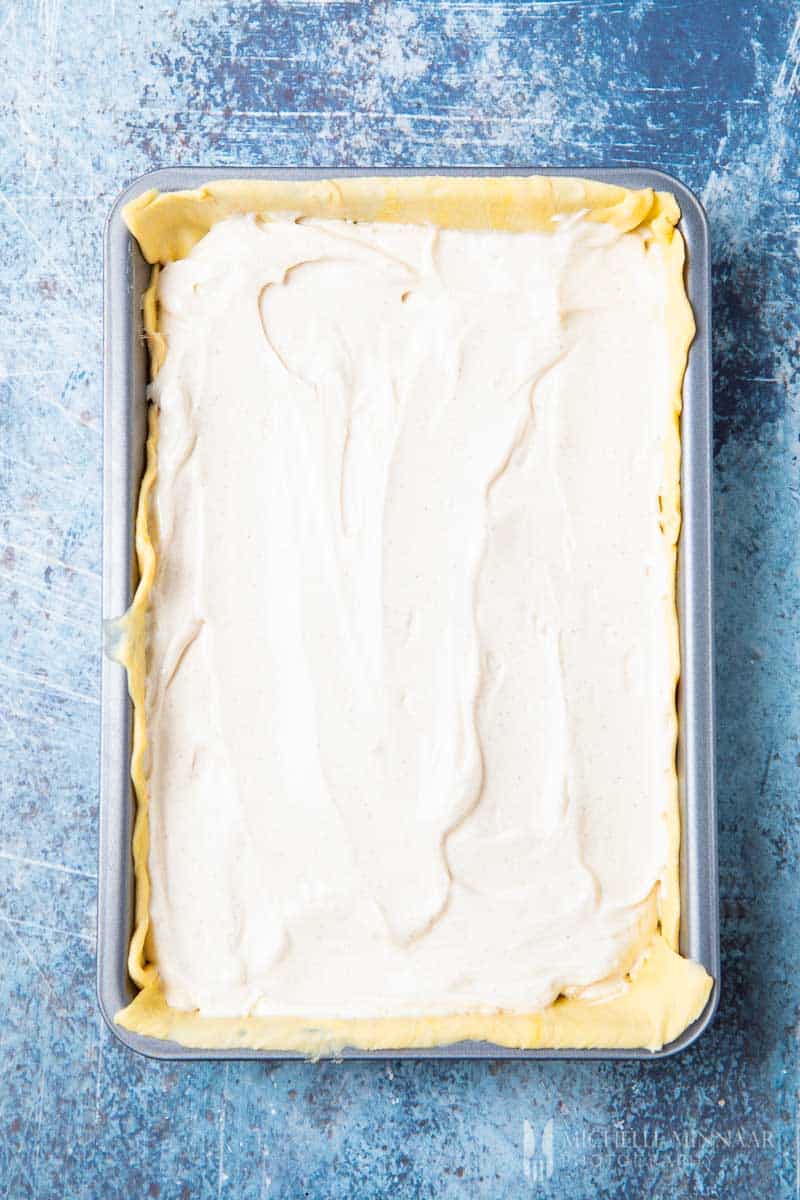 Below you’ll find the different types of sopapilla in different countries:

In Uruguay, they call it torta frita. Ordinarily, they are quite salty because there is a lot of salt in the mix. Hence, when they are ready, so they are sprinkled with sugar.

Typically, sopapillas in the US are served as snacks along with dips, salsas or sauces. Plus, they are very small, almost pillow-shaped.

Here, you can find sopapillas under these names: sopaipa, torta fina, chipa cuerito, kreppel, sopaipilla or supaipa. Generally, they are very flat and thin.

If you visit Peru, you might know it as cachanga. They are served for breakfast – either sour or sweet.  If you are interested in Peruvian cuisine, you should also try my lomo saltado or my ceviche with tiger’s milk.

There is a long history of eating sopapillas in Chille. Apparently, traditional Chilean sopapilla recipes call for ground pumpkin inside the dough mix. If you fancy a savoury version, you serve them with a chilli pepper dip and cilantro. The sweet version is served with syrup, orange peel as well as cinnamon. This can be an excellent source of inspiration for this sopapilla cheesecake recipe. Therefore, consider adding orange zest and serving them with syrup or honey. 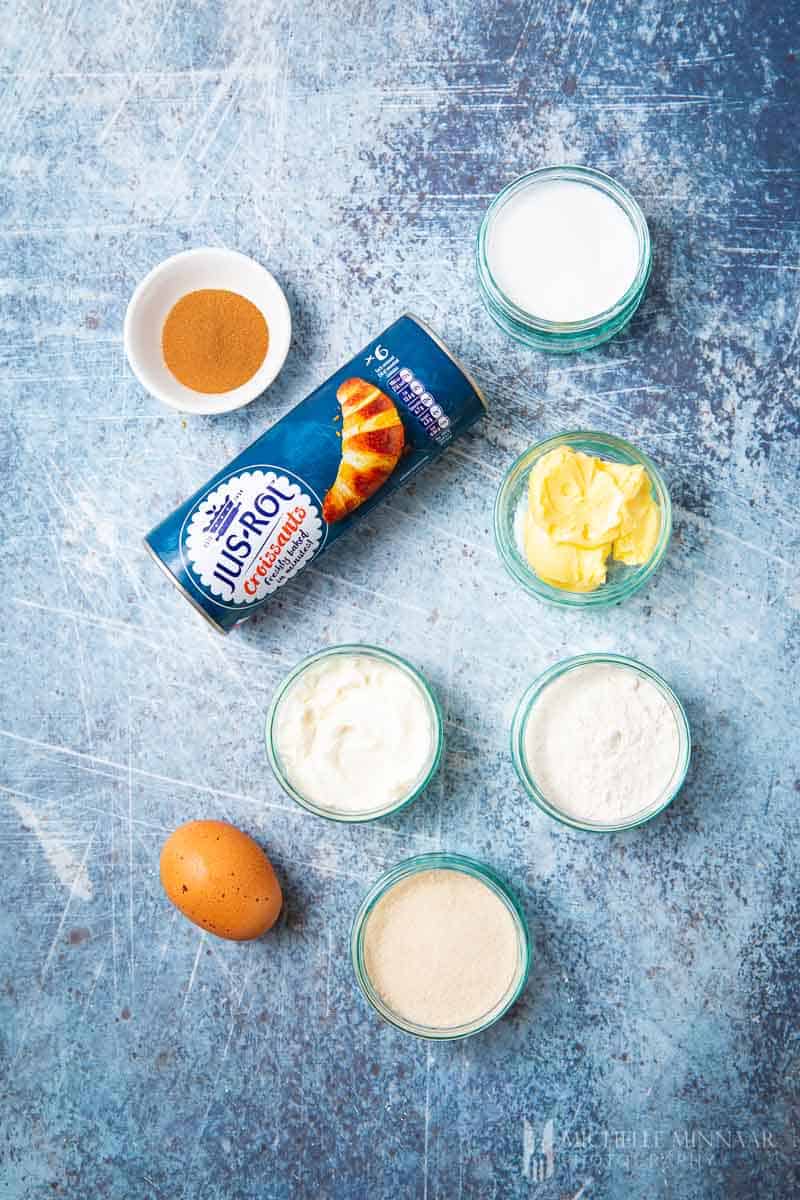 In general, a close substitute for sopapilla would be a Madeleine cookie for France. However, as with any cheesecake recipe, any type of cookie substitute works.

For instance, you can consider:

The choice is entirely yours!

There some clever tricks you can try when making your sopapilla cheesecake successful. For example: 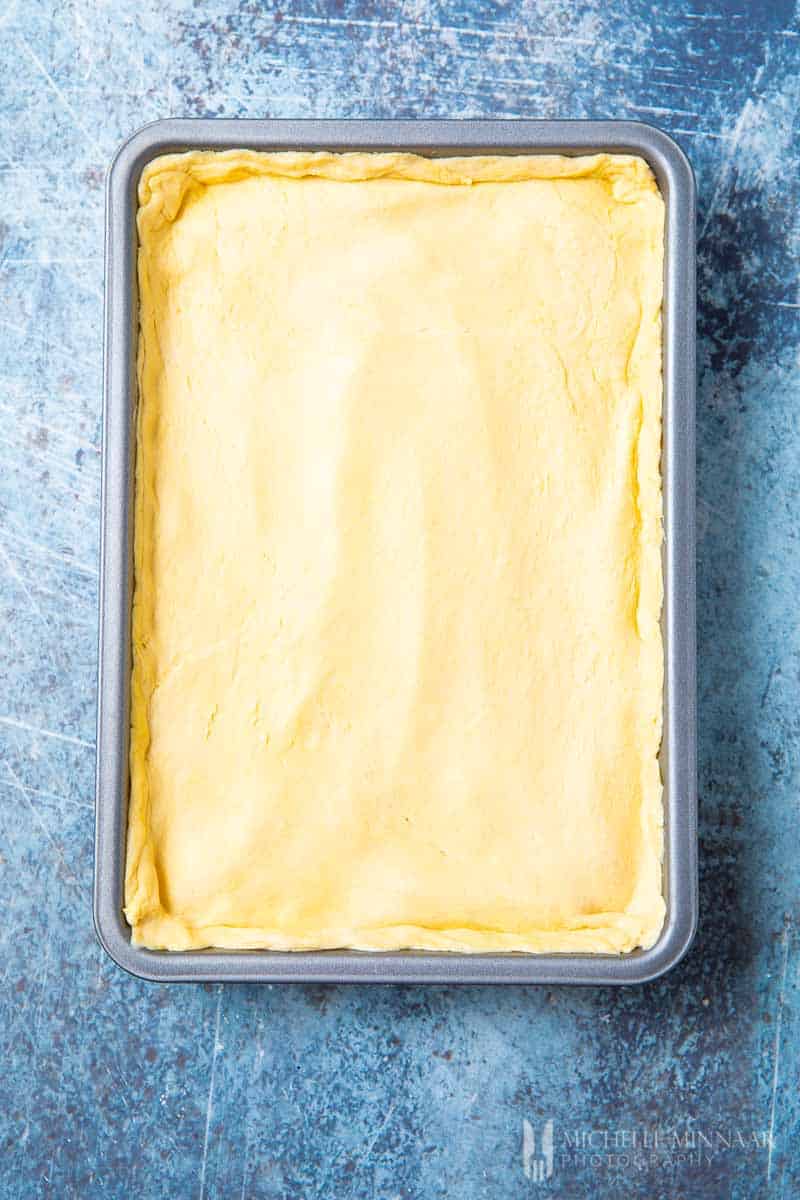 Now comes the interesting part where you can let your creativity shine. First, to make this sopapilla cheesecake recipe your own, add some citrus zest. This will lighten up the cheesecake. Plus, it will add a wonderful contrast to the creamy sweetness of the cheese.

Here, you can either use lemon, orange or other citrus. Let me remind you, orange zest and cinnamon go hand in hand. It’s the perfect recipe for the upcoming autumn holidays. Consider it a comfort dessert!

If you’ve got leftover cream cheese, feel free to inspire yourself with these recipes:

Next, if you love chocolatey cheesecakes, you can add cocoa powder into the mix. For instance, add a tablespoon of cocoa powder and watch the cheesecake change colour. The more you add, the more intense the flavour. In short, don’t add too much, otherwise your cheesecake will lose its creaminess. Additionally, it can become a little bitter. Of course, this depends on the type of chocolate you use. 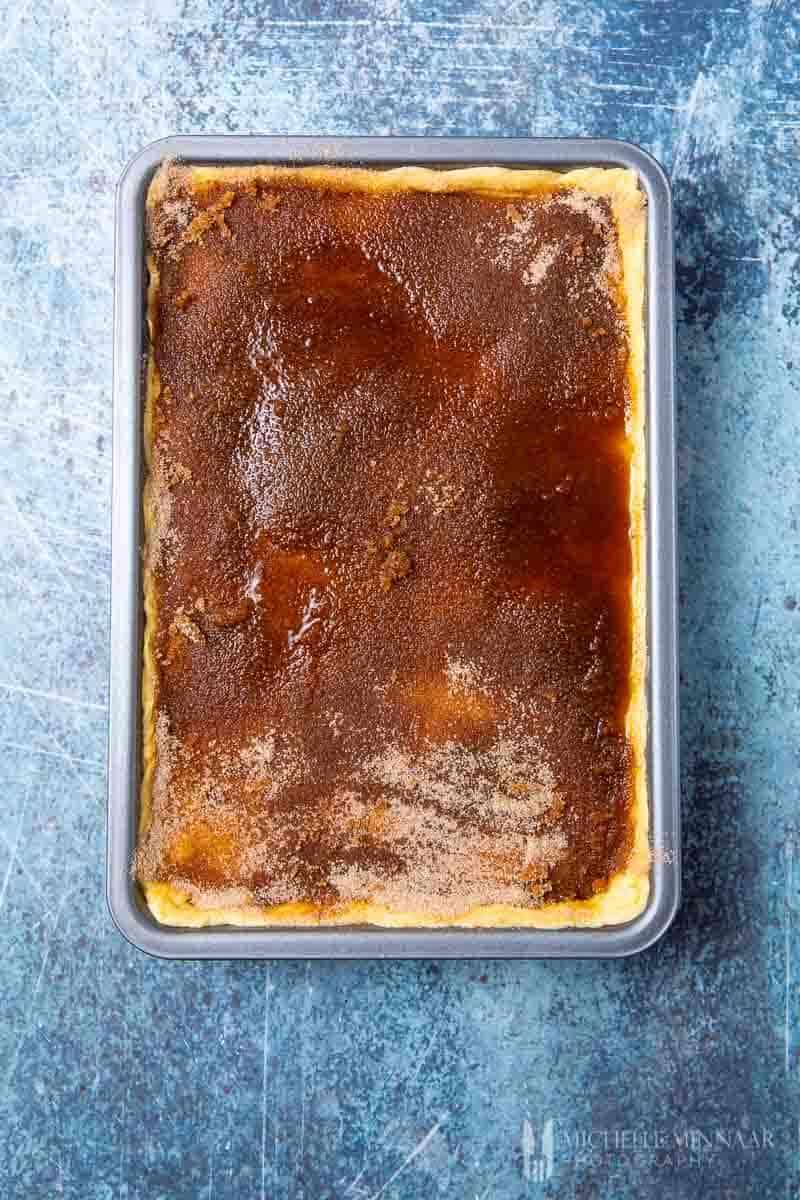 In fact, the way I’ve cut the cheesecake resembles my mars bars cakes recipe or sugar free flapjacks. In my opinion, you should cut them up into little squares too. This way, they are more manageable and can even be eaten by hand – in my house anyway!

In summary, you can also consider the following toppings:

How would you serve this cheesecake?

You simply must try this delicious sopapilla cheesecake recipe! Learn more about this dessert and its Spanish heritage. Make it today! 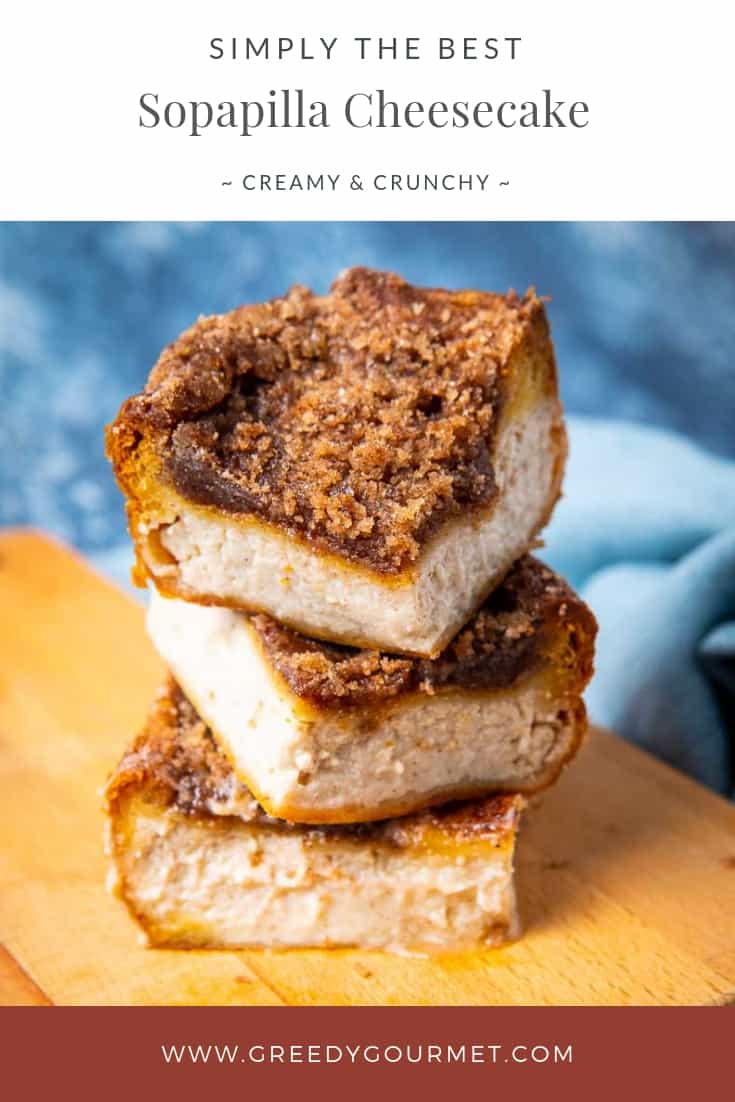