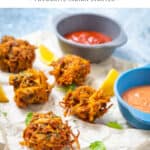 Mushroom pakora is one of the best and healthiest pakora recipes. In essence, it’s a ball made of vegetables which is deep fried. It is suitable for vegetarians, and mushrooms are both nutritious as well as delicious. Combined with a delicious homemade red pakora sauce, the earthy flavours of the mushroom pakora are beyond any store-bought starter.

There are multiple versions of pakora recipes out there, so you can even add additional ingredients to jazz these babies up. Don’t be afraid to experiment and make your own version of mushroom pakora.

You can easily serve mushroom pakoras as a starter, for canapés or even as a side dish. If you wish to serve the mushroom pakora as a main course or main meal, then double up in portion size. Remember, these pakoras are only bite sized. 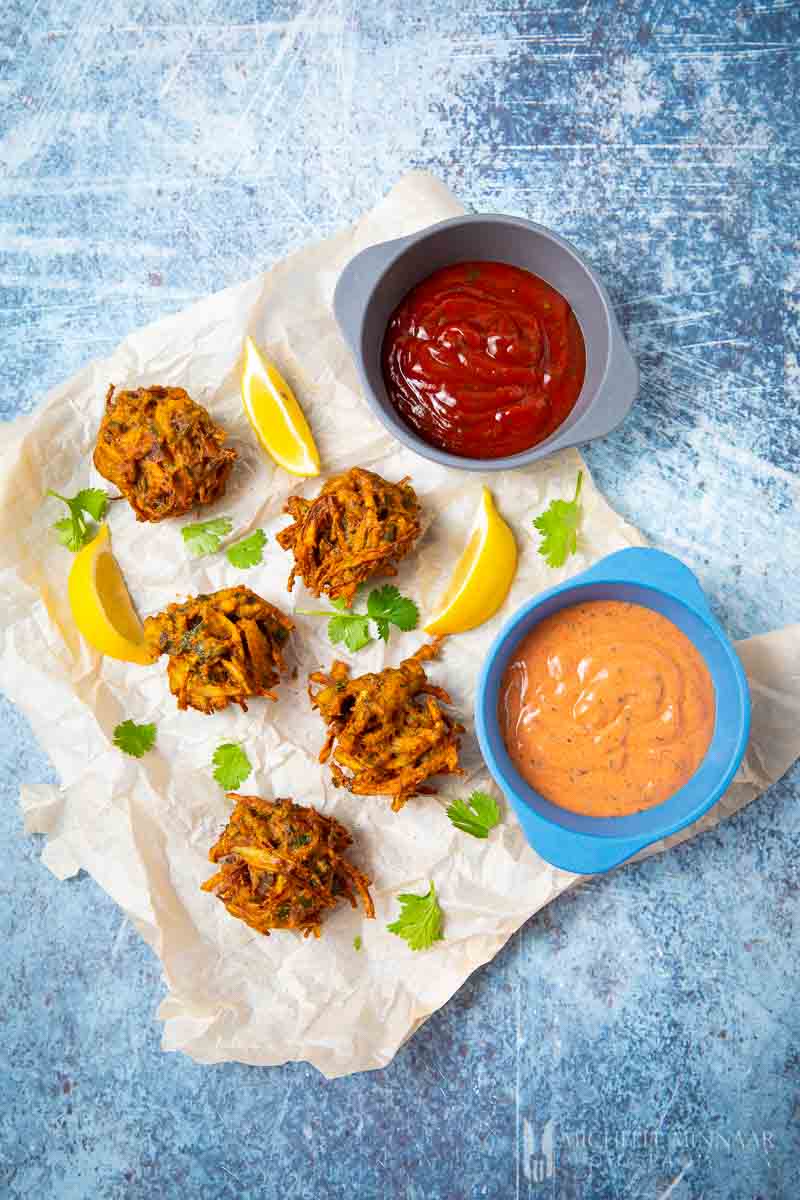 In essence, a pakora recipe creates one of the best Indian finger-foods. If you are into Indian street food, then this is the recipe for you. If you plan on serving other bite-sized Indian-style starters, you should also consider paneer tikka and chana tikki. Enjoy discovering the deliciousness of Indian street food! Let me know what type of pakoras you come up with.

My mushroom pakora recipe is simple and inexpensive to make. It calls for one of the most underrated ingredients in the world: mushrooms.

Mushrooms are a fabulous ingredient, and there are so many different varieties (thank goodness), that sometimes it’s hard to choose which ones are the perfect choice for your given recipe. This mushroom pakora can be made with many types of mushrooms. For instance, you can consider:

As you can see, I’ve opted for the first type of mushroom, meaning button mushrooms or common mushrooms. Which mushrooms would you use for your mushroom pakora? 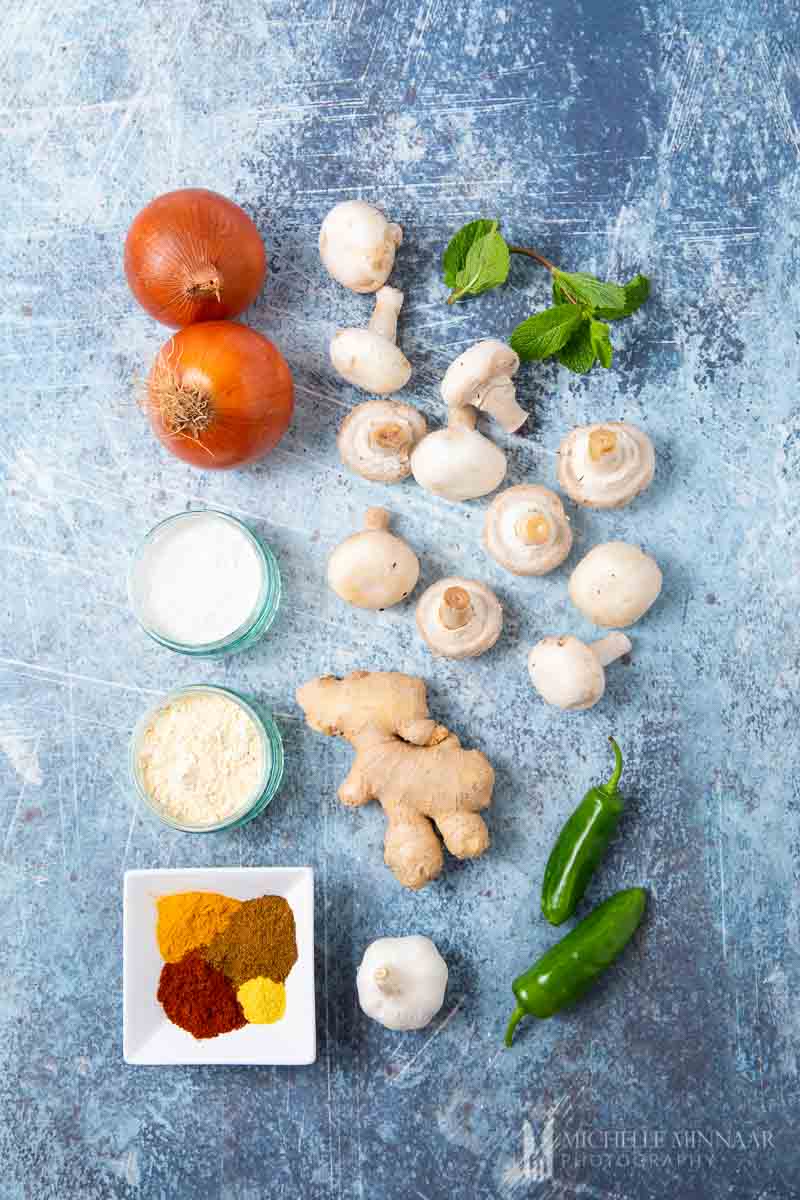 How to make Indian pakora

Here is a list of the essentials you’ll need to make a delicious mushroom pakora recipe.

Oyster mushrooms are one of the most common mushrooms used in an Indian mushroom pakora recipe. Simply because they are very easy to prepare and they give off a lovely taste and aroma.

If you wish to use another type than the common button mushroom, then I highly recommend you use oyster mushrooms. Oyster mushrooms are known for being medicinal. That’s because they contain some properties that help the digestive tract as well as support the immune system.

Oyster mushroom soup would be the thing you’d find in Central European households, when the kids have a cold.

In either case, don’t hesitate to use oyster mushrooms in a mushroom pakora recipe. They hold their structure well and will not fall apart during the deep-frying process. 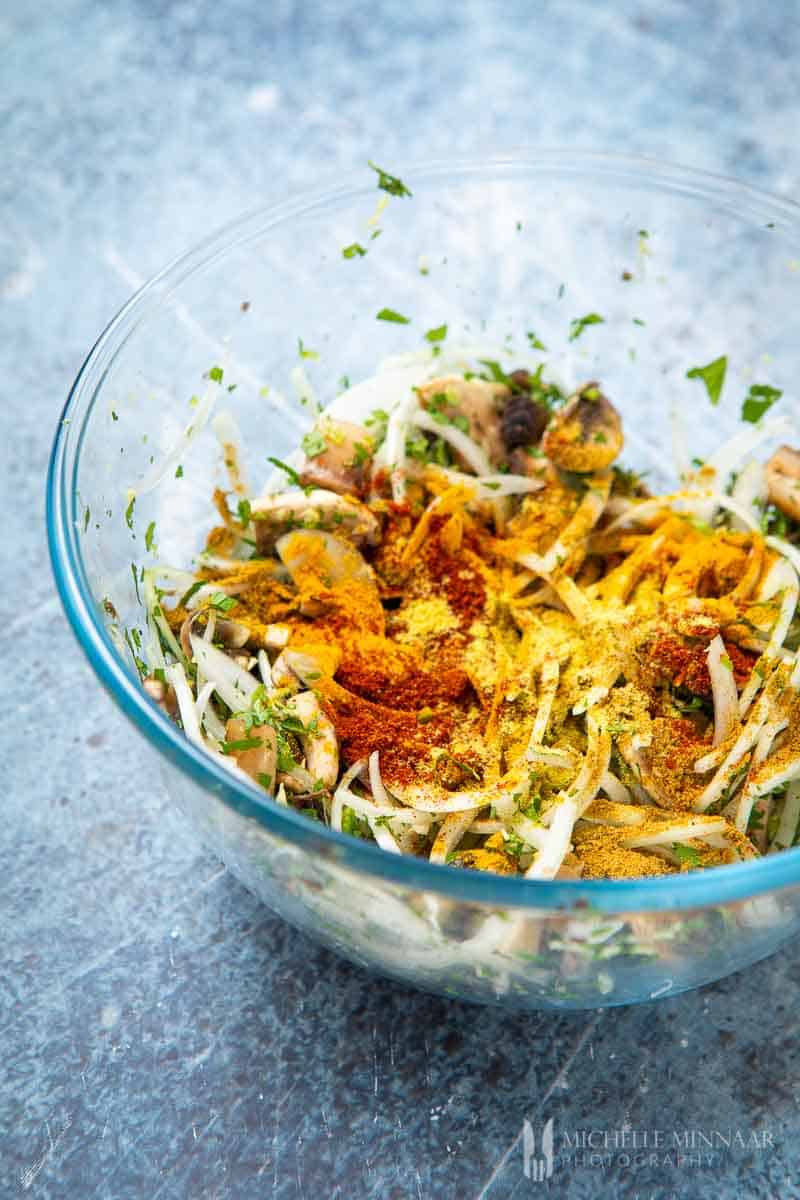 Now, in terms of spicing, generally you have all the liberty in the world when it comes to making pakora. In fact, it’s like making your own curry. You can spice it in any way you prefer and make a completely unique version.

Even though a mushroom pakora recipe requires deep-frying, you won’t have to worry about the calorie count.

However, if you feel a little bit guilty about the deep-frying process, I have an excellent suggestion for you. Instead of deep-frying the mushroom pakora in normal oil, go for coconut oil. Just remember that it has got to be unscented coconut oil.

You won’t even notice the difference – whether you’ve deep fried it in normal cooking oil or coconut oil. Besides, coconut oil is so much healthier for you, especially when it comes to digestion. It contains those healthy fats which also have anti-fungal and anti-inflammatory properties. Basically, it has the ability to regenerate your intestines as well as your metabolism. That’s the magic of coconut oil.

If you feel like you need some protein, you can always add chicken to this mushroom pakora recipe. In fact, in India, you would be able to find all sorts of versions of pakoras. Whether it be chicken, beef, lamb, you name it.

The key thing though is to cut the chicken into thin strips so you can manipulate it into the form of a sphere. 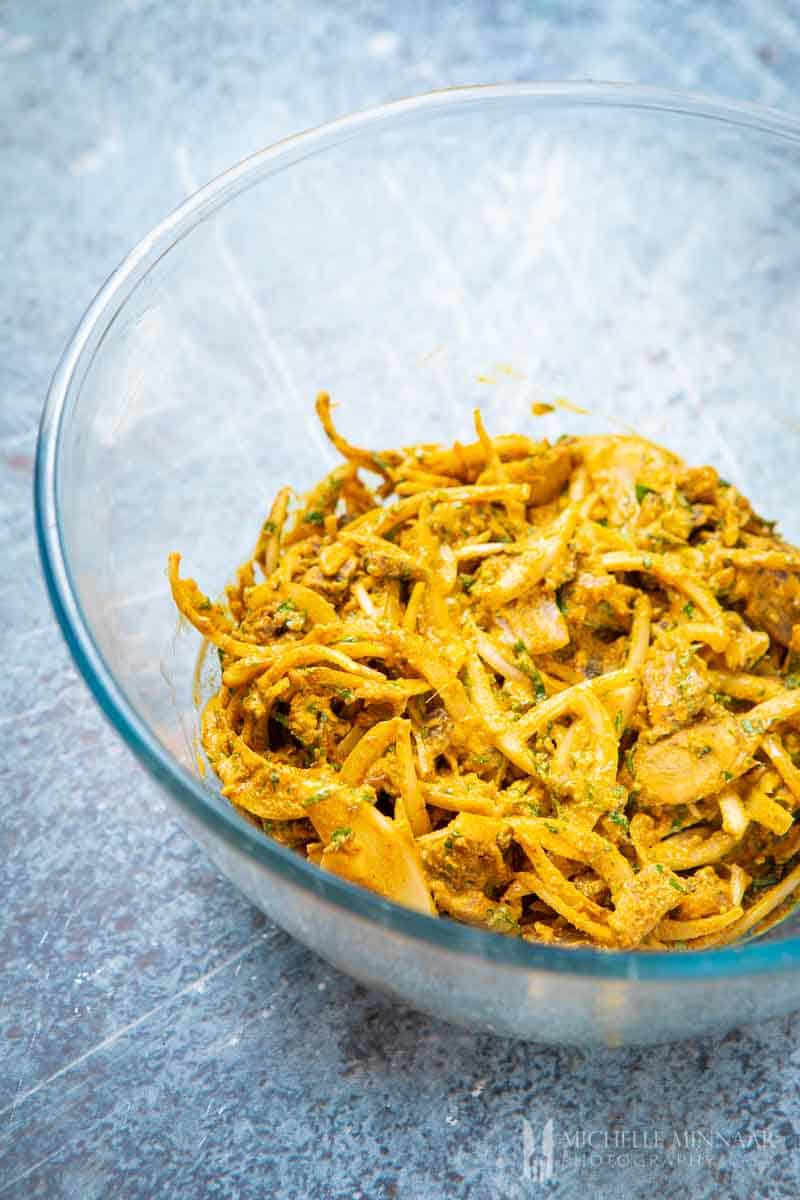 How to serve pakora

In essence, there is only one essential sauce to serve with Indian pakora. That is fresh red pakora sauce, which is a spicy Indian dip. It also comes in different versions such as Scottish pink pakora sauce and green pakora sauce (mostly made with either mint or spinach).

Even though a fresh pakora sauce is the ideal pairing, you can also serve the mushroom pakora with these Indian dips:

As you can see, you have tons of options for serving your mushroom pakora. It all depends on what your favourite sauce is and what you feel like dipping the pakora into on any given occasion. Honestly, you can’t go wrong with any of the sauces mentioned above, as they are all homemade and flavourful in their own way.

How would you make a mushroom pakora recipe? Would you follow the recipe or put your own twist on things? Let me know in the comments section below. 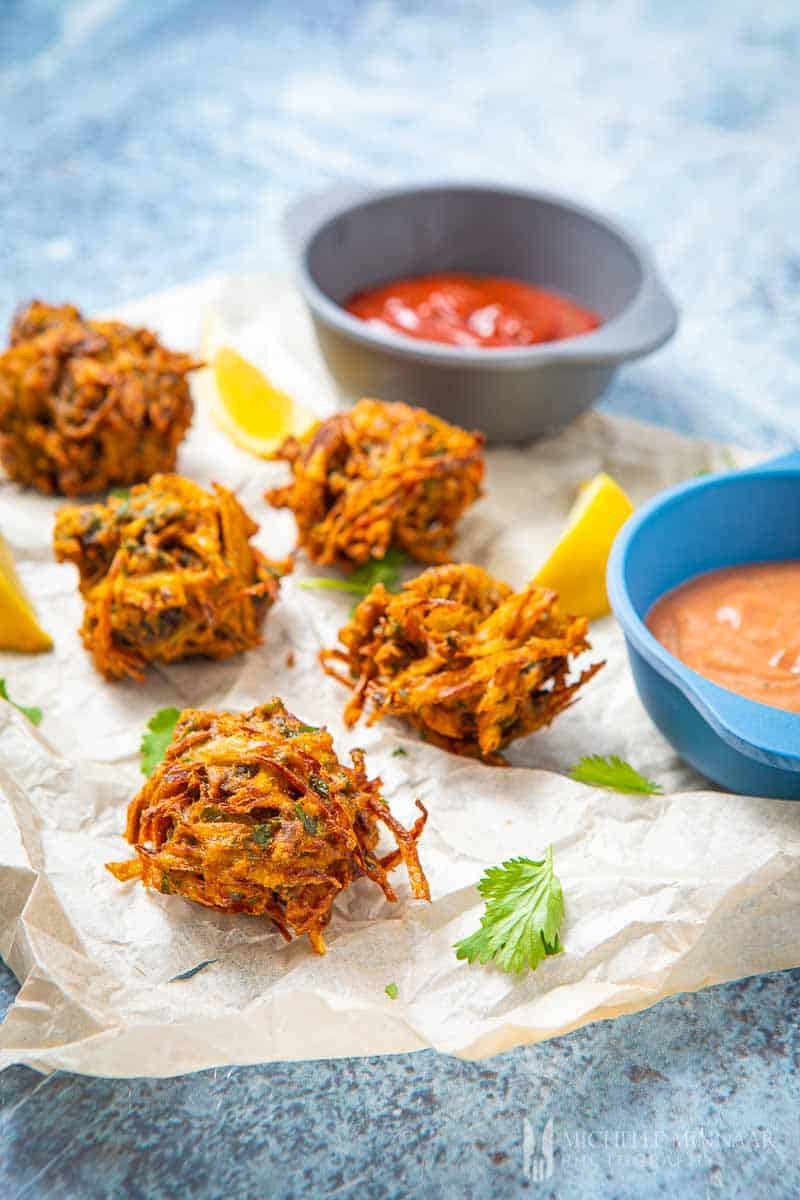 Try this delicious mushroom pakora recipe today! Serve it with a homemade & fresh red pakora sauce & you are in for a treat. 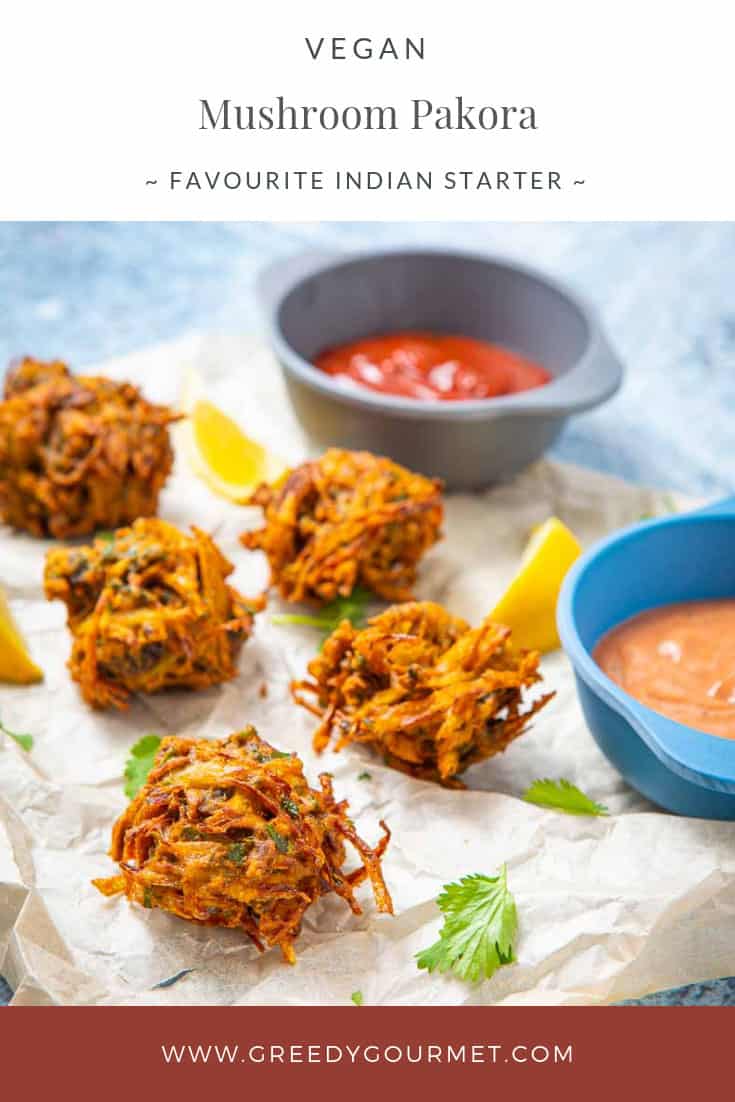