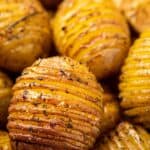 Is there a better smell than rosemary potatoes cooking in the oven?

Christmas Day without roast potatoes in the oven just isn’t the same. Add the smell of rosemary into the mix and you’ve got a merry mix of heavenly smells and flavors.

Potatoes with rosemary is an amazing combination and this roasted side dish recipe will make a great addition to your Christmas feast.

Products you’ll need for this recipe

This rosemary potatoes recipe is the perfect Christmas dinner side dish. What could be better than garlic infused rosemary potatoes, crispy on the outside, and light and fluffy on the inside?

Rosemary roasted potatoes is one of the many Christmas time essentials. There’s just something so comforting about biting into a golden brown potato. Rosemary, garlic and olive oil are the three amigos when it comes to flavoring potatoes – the three magic ingredients that’ll make any roast potato recipe sing.

How to make rosemary potatoes

As recipes with roasted potatoes go, this one is pretty straightforward. Simple ingredients – just the potatoes, fresh rosemary, garlic, salt and pepper – and an easy cooking process make this side dish simple to cook.

One option is parboiling the potatoes in a large bowl of salted water makes sure they will be extra soft and fluffy on the inside as well as crispy on the outside. It’s not essential, but it’s an extra trick to make sure these roasted potatoes are as tasty as possible and takes no time at all.

After about 25 minutes, when the potatoes have developed a nice crispness, you’ll give them a shake to make sure they get cooked evenly. This is when you’ll add the rosemary and put them back in for another 20 minutes. This time, when you take them out of the oven, they’ll be golden brown and ready to devour with your festive feast!

How to season roasted potatoes

You can season rosemary roasted potatoes three ways – at the beginning, in the middle or at the end of the cooking process.

For me, parboiling potatoes in salted water gives them a beautifully seasoned taste that really gets in deep. Black pepper can be added before they go in the oven, but salting them this way gives the rosemary roasted potatoes an extra special taste.

If you’re not parboiling them, sprinkle liberally with salt and black pepper just before you put them in the oven.

What can I make with fresh rosemary?

There are an endless number of ideas when it comes to cooking with fresh rosemary. Almost any savoury dish will be elevated with the addition of this magical herb.

Try chopping finely and frying lightly in butter with crushed garlic, then adding to mash potato for an extra special twist to standard mash.

Chop finely and rub into butter with crushed garlic for an extra special rosemary garlic butter. You could spread this onto a baguette and then heat it in the oven for amazing rosemary and garlic bread.

Or, add it freshly chopped into soups at the last stage of cooking.

Adding chopped fresh rosemary into a burger mix or rubbing it into any cut of meat will elevate the flavor, especially lamb. When it comes to perfect pairings in food, lamb and rosemary takes some beating!

What to eat with roasted potatoes

Try some of these amazing mains with this delicious side dish.

One last thought, why don’t you try serving the potatoes with blue cheese sauce?

Please let me know what other ideas you have!

Rosemary potatoes is a vegan potato side dish recipe that works well with most western meals, especially roast lamb dinners.