You are here: Home / Special Diets / Dairy Free / How to Brine Chicken
Jump to Recipe

The results of brining chicken can be an unforgettably delicious experience. However if you don’t know how to brine chicken, it can also turn very bad and you might never want to touch chicken again. Nevertheless, you should definitely try it when you have a spare bit of time. Enjoy! 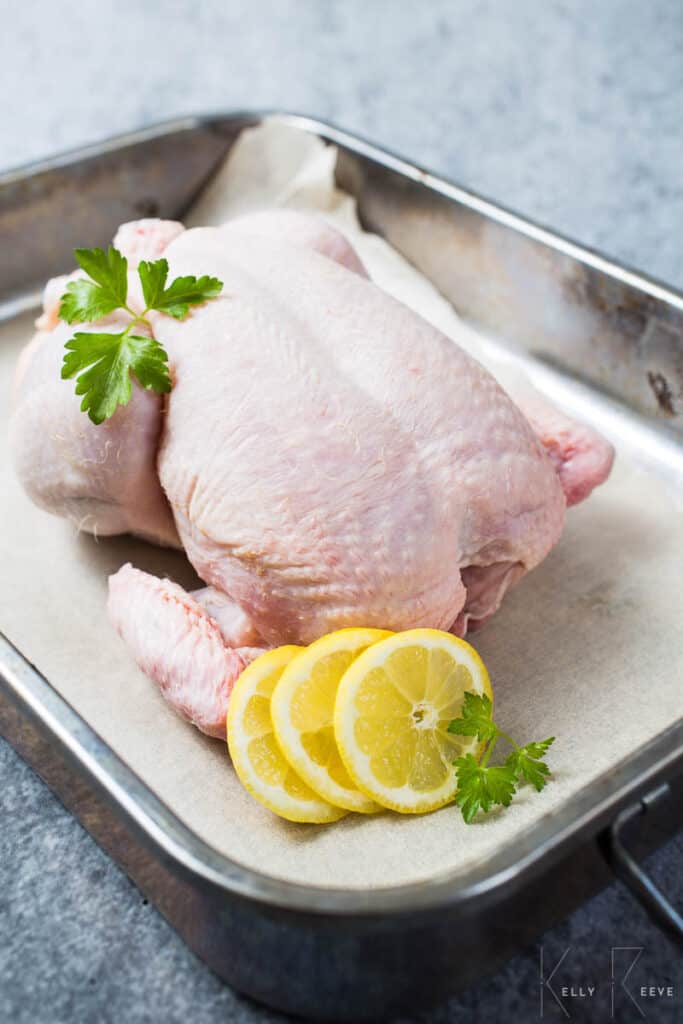 Have you ever heard of brining chicken? Well if not, let me explain to you, what it’s all about. Brining chicken is a preparation you can do, in order to keep the chicken nice and moist during cooking. Almost like a neutral marinade, the brine moisturises the meat prior to cooking it, in order to keep it from getting dry. You have probably had this happen to you before, e.g. with the chicken breast or turkey leg, and the meat ended up being dry. Poultry is especially in the danger zone when it comes to dry meat. Even more so if you cook it in the oven. This is where the brining technique comes in quite handy. If you use this method, you would never again serve dry roasted chicken.

The normal way to brine chicken is to do a wet brine. The Americans have already been using this method for ages in order to prevent the Thanksgiving turkey getting dry. You can apply the same method to your ordinary roast chicken though. A wet brine is something in between marinating and pickling the chicken.

First make the mixture of water, salt and sugar in a bowl large enough to house the entire chicken and then submerged the chicken in the liquid. For this method, ordinary fine table salt will do as it simply needs to be dissolved in the water!

Once you’ve got the bird in there, leave it as long as possible. Preferably overnight, or prepare the brine in the morning, if you plan to roast the chicken for dinner. If you are pressed for time, leave it in there for at least a couple of hours, which is better than nothing. The longer the better, but anything between 12-24 hours should get you the desired result. 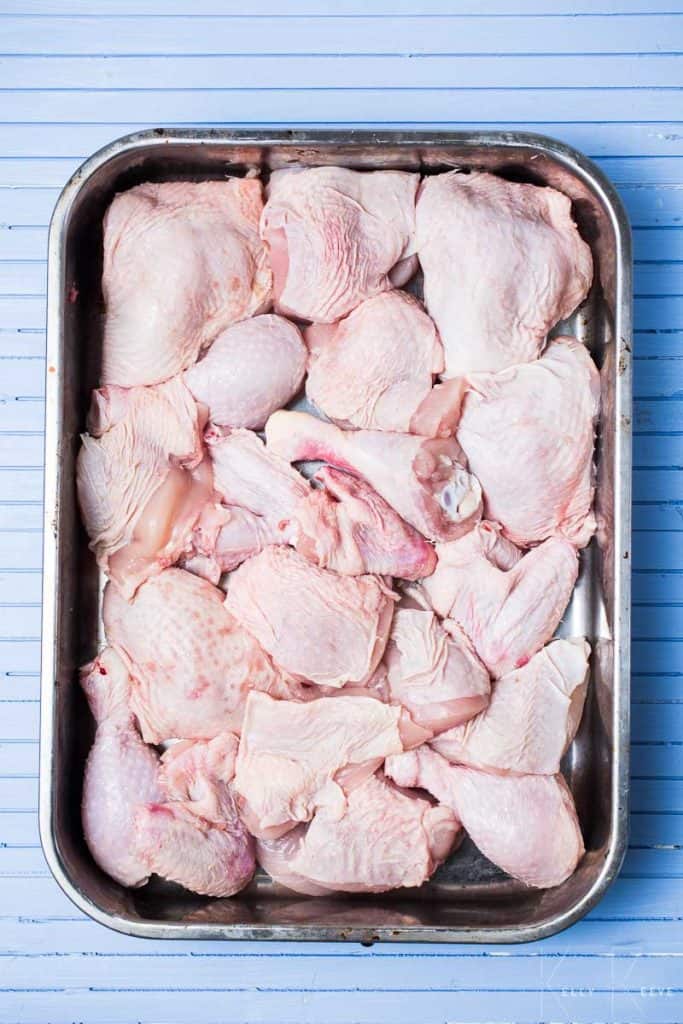 Usually wet brine is heated on the hob in order to dissolve all the salt and sugar properly. Warning, you need to wait for the liquid to cool down before submerging the chicken in it, otherwise it will cause bacterial growth! By the way, when finished, never store the brine for later use. Throw it away at once!

What actually happens in there?

The salt in the brine helps breaking down the fibres and get the water into the cells of the meat. Moreover, it keeps the moisture in there while cooking the chicken. When the chicken is being cooked, the proteins in the muscles contracts, causing moisture to be pushed out. This is what in the end gives you dry and stringy meat. The salty brine dissolves some of the muscle proteins, making the muscles prone to absorb moisture. The weakened proteins mean that the contraction will be considerably less during the cooking process. This means that the moisture will stay inside rather than be pushed out. Fantastic, right? 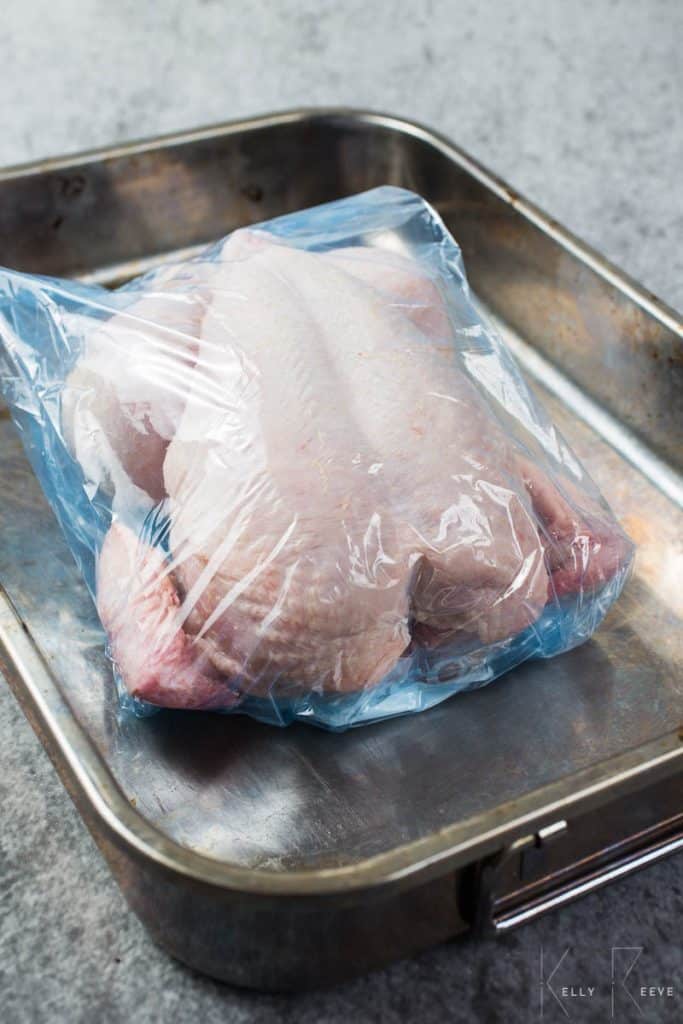 You can actually kill two birds with one (salty) stone so to speak and add some flavour to the brine. Simply season the brine with the flavours you want to have in the chicken. You can add anything you want, as you would in a normal oil based marinade. Lemon juice, garlic or herbs like thyme or rosemary works great with chicken. Or, you go more traditional with bay leaves and mustard seeds. However, there are a couple things to keep in mind when seasoning.

Advice from the expert

American cooking expert Harold Mcgee explains: the molecules of salt are relatively tiny and can easily find their way into the cells of the meat. Whereas the molecules of the organic compounds, say a clove of garlic, are relatively large, will not be absorbed as much nor as quickly. I would still recommend adding some seasoning in there. It will give the meat a subtle flavour of your chosen ingredients. You can always add a bit more seasoning just before putting the chicken in the oven. 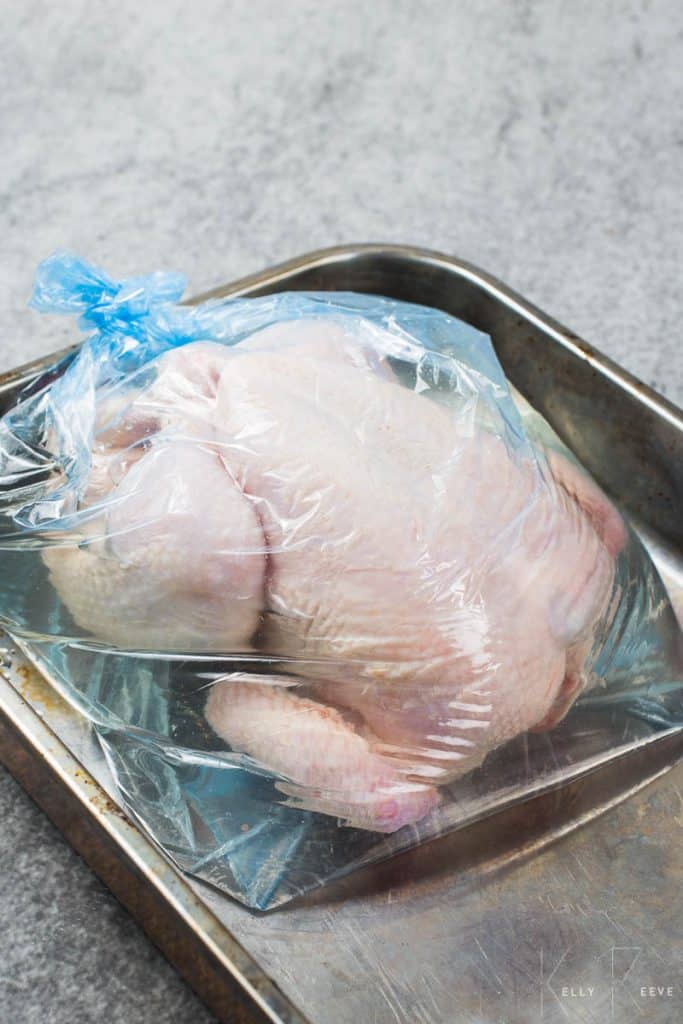 The dry brine method, also simply known as salting, is a different way how to brine chicken in order to achieve the result that you are looking for. As the name suggests, it is not a marinade of water. Some people argue that the wet brine brings too much “artificial” moisture to the meat, and thereby dilutes the actual taste of it.

The dry brine is a dry salt rub that you put on the outside of the chicken, leaving it to lightly cure overnight. For this you should use a coarse type of salt. Through a process called osmosis, the salt draws moisture out of the chicken, which then dissolves the salt on the outside, creating a membrane of concentrated brine on the outside. The brine is then subsequently absorbed into the meat, while breaking down the proteins in the same way as the wet brine does. This means that there is no extra moisture going in there, only the actual juices from the chicken itself. These will now be contained much better through the cooking process.

This will however leave you with a less juicy chicken than with the wet brine. Again, you can season the dry brine with dry spices, such as garlic powder, dried rosemary and ground black pepper. There is much debate which one is the best. Especially in the motherland of brining, the USA. I would love to know what method you found to be the best, so please leave a comment below. 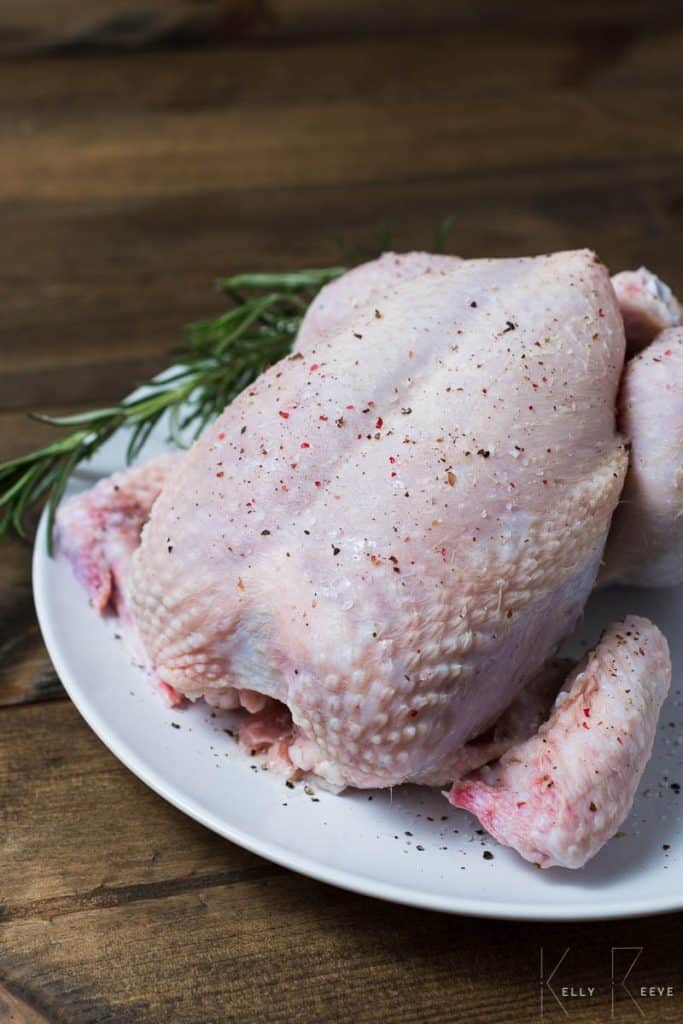 Roasting or smoking the chicken

When roasting the chicken, simply dry off the chicken with paper towel and roast it in the oven as you would normally. If you roast at lower heat for longer time, you will further increase the moisture within. It doesn’t necessarily need to be an entire roast chicken. You can use the same methods for chicken breasts or turkey breasts for that matter. You will get a much juicier result than what you would normally get. To add a little more moisture, I like to include lemon. Who doesn’t like lemons and herbs with their chicken, right?

In this case, I brined the chicken to be smoked. Stay tuned!

Are you tired of dry, stringy chicken? Brining your chicken is the solution! This method can be used when you want to roast or smoke chicken. Have fun!