You are here: Home / Ingredients / Marlin vs Swordfish

Whether you are a seafood enthusiast or love cooking with fish, you’ll know that sometimes we come across fish that are very similar to each other. However, even the smallest variations between fish can make the difference between creating something rather average and producing amazing seafood dishes. That’s why it’s essential that you can recognise the difference between marlin vs swordfish when you are creating an amazing seafood dish.

difference between marlin vs swordfish

Unless you are a seafood expert or a top seafood chef, it will be very difficult for you to recognise the difference between types of fish, like marlin vs swordfish. Especially, since you usually come across these fish in restaurants where they’re already prepared, filleted and cooked. 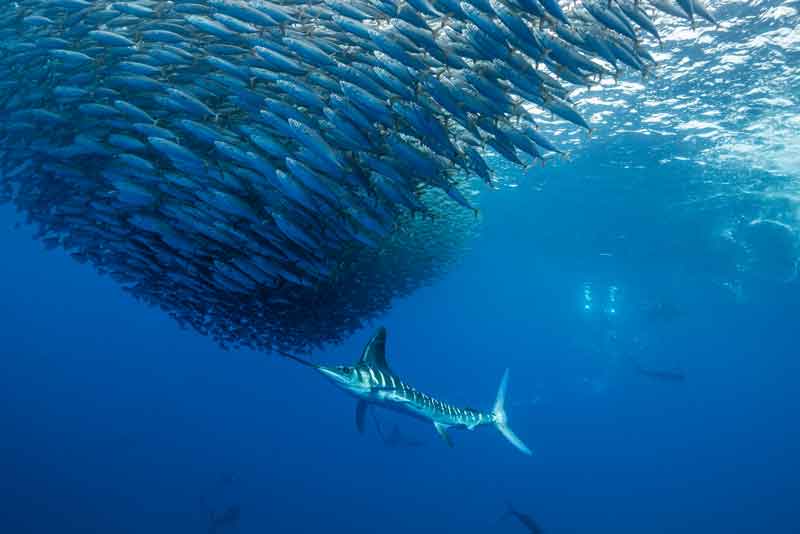 The marlin belongs to the billfish family or Istiophoridae family. It is a deep sea/ocean fish which is commercially fished. It is also a desirable candidate for extreme fishing or sports fishing.

You might know the marlin by its long spear and long body. You can recognise it by its significant dorsal fin and its long upper jaw. Its spear can be lethal, especially to its prey which consists of squid and schools of smaller fish. For this reason, they are one of the top predators of the sea.

Overall, marlin is a very strong fish, and spends most of its life (ranging up to 20 years in males and up to 30 years in females) in the deep seas. Depending on the type of marlin, you can find them in the Atlantic, Pacific and Indian ocean, following warmer currents. They are migratory fish, so the marlin can swim for thousands of miles.

If you are into fishing, you’ll know that marlin fishing is considered an extreme sport. I felt the same when I went fishing for bonito. The end result of having fresh grilled bonito and grilled wreckfish was worth the thrill though!

what you need for bill-fishing

Generally speaking, there are about ten species of marlin. All of them are very closely related to the swordfish, that’s why it’s worthwhile to know the difference between marlin vs swordfish. However, two types of marlin are most popular, which include the Pacific black marlin and the blue marlin.

The Atlantic blue marlin, otherwise known as Makaira Nigricans, is known as one of the largest fish in the world. It is capable of attaining speeds of more than 110 km/h. Just imagine this fish out-swimming a speedboat!

In addition, the blue marlin is famous for its beautiful cobalt blue colour with a whitish underbelly – and of course its long and lethal spear.

Apparently, the blue marlin is facing danger of extinction due to several reasons, such as the problem with plastic. 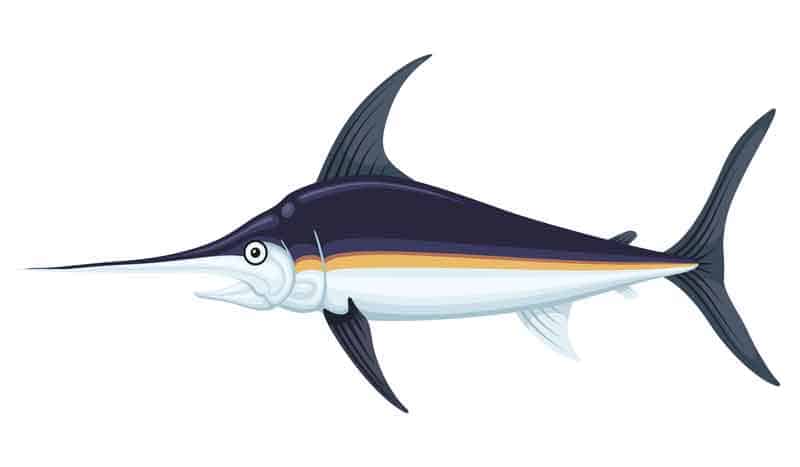 Even though marlin is a generally large fish, the Pacific black marlin is considered amongst the largest of the marlin species. It can reach a length of up to 5 metres and can weigh up to 700 kgs.

Black marlin generally reside in tropical waters such as the Pacific and Indian ocean. Compared to the blue marlin, it’s considered as a more solid fish.

Marlin has a pink flesh, very similar to that of a swordfish, although the swordfish is much lighter. It has a naturally high-fat content, hence it’s a fatty fish. The flesh is quite dense just like tuna, with a stronger flavour. However, compared to a piece of swordfish, the marlin is milder in terms of flavour. 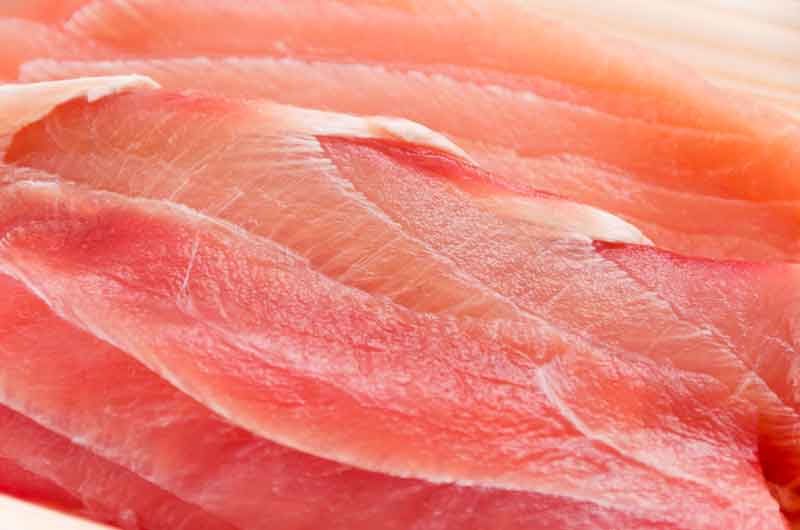 The best way to serve marlin is sashimi style, not cooked all the way through and cut in thin slices. With a few drops of sesame seed oil, lime juice, and some fresh coriander, it makes a delicious Asian-style starter. Otherwise, consider using the marlin raw in sushi. Or try it Peruvian-style in a Peruvian ceviche.

Check out this sashimi and sushi master class here if you want to sharpen these skills. 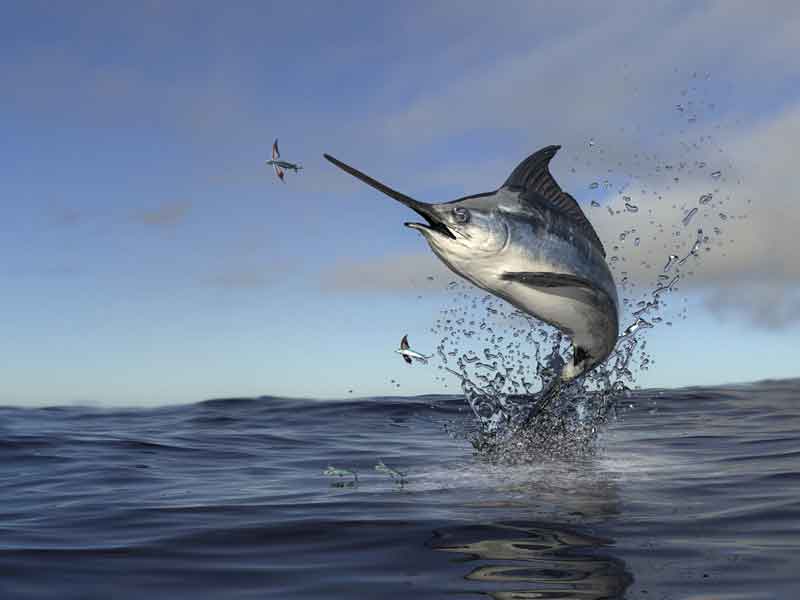 Belonging to the same billfish family as marlin, the swordfish shares the same habitat (tropical waters of the Atlantic, Indian and Pacific Ocean) and migratory patterns as well. When comparing marlin vs swordfish, this is one obvious similarity.

Comparatively, it is a large marine fish with a round body. The physical appearance of the swordfish also resembles that of the marlin. Although some people mistake the dorsal fin for that of a shark, as they are quite similar, a marlin’s sail is more like a sailfish.

Generally speaking, a swordfish is smaller than marlin (weighing up to 650 kgs), but it can also grow up to 5 metres in size – partially thanks to its legendary long sword, which can take up almost one-third of its length. The snout of a typical swordfish is flat, whereas that of a marlin is round. Did you know that the sword is not for the purpose of spearing, but rather for slashing at prey?

In either case, female swordfish are much larger than male swordfish. Moreover, in comparison to the marlin, swordfish only live around 15 years. Although, the oldest female ever recorded was 16 years old. When it comes to speed, it’s not as fast as the marlin, only travelling up to 90 km/h.

Apparently, there are only one species of swordfish! As per classifications, the swordfish is classified as an oily fish. 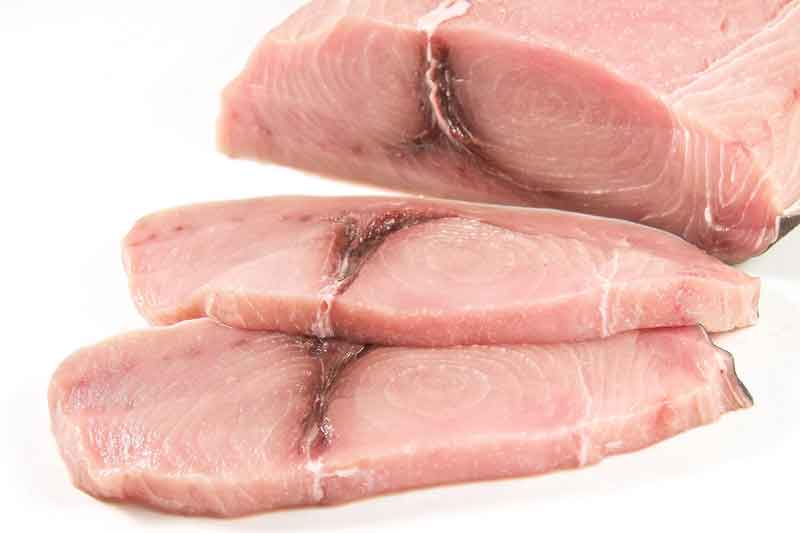 First, the flesh of a swordfish has a lighter, more whitish colour than marlin flesh. Sometimes, however, due to the swordfish’s high consumption of shrimp, their flesh turns an orange colour. When this happens, it is sold at a premium price.

Swordfish is very popular, and is usually filleted into steaks which are then grilled. This is because the flesh of this fish is rather firm, hence it can be cooked in many more ways than other delicate fish. For example, you can easily put swordfish steaks on skewers like this, or you can cook a fish soup with larger chunks in it. Otherwise, you can also pan-fry it, marinate, and even eat it sashimi-style.

I recommend keeping an eye on your swordfish steaks when you cook them, as the fish can easily get too much heat and take on a dry texture.

I hope that, now, you’ve become an expert at recognising differences between marlin vs swordfish.

Were you able to tell the difference between marlin vs swordfish? Have you ever sampled these fish? Let me know in the comment below.