You are here: Home / Cooking Times / b) 30 - 60 mins / Potato Latkes with Caviar and Crème Fraîche
Jump to Recipe 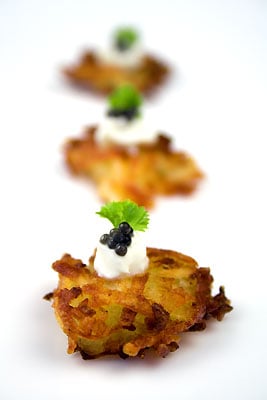 It’s that time of the month again. No, no. Not that time! Nicole from For the Love of Food has paired over 40 bloggers in her Taste & Create event. The idea is each partner has to make one of the recipes on the other’s website. This time round my partner is The Allergy Kid. All her recipes contain no eggs, dairy products, nuts or red meat, since her son is allergic to them all and in case he does get it into his system, he ends up in the Emergency Room.

Being sensitive to wheat and lactose myself, her potato latkes really stood out for me. What made them different was the lack of combining agents like eggs and flour. Yes, they ended up being slightly tricky to work with but it was all worth it, knowing I could eat all the crispy and lovely latkes stacked high on my plate without having to keel over of stomach pain half an hour later. You might think I confused latkes with blinis, having served them with crème fraîche and caviar but it works wonderfully. Let’s just call it a Russian twist. 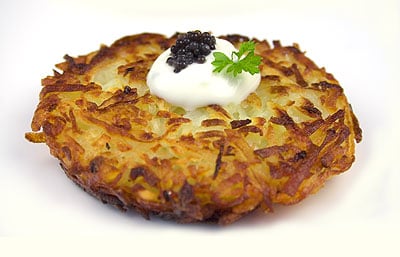