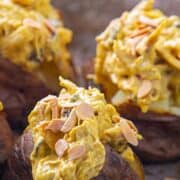 Quick, healthy and delicious – the holy trinity of midweek food. Well, this coronation chicken jacket potato recipe is all three and so much more!

So, whether you’re cooking a midweek meal for a busy family or want to whip up a simple lunch, this fabulously easy and terrifically tasty recipe is for you.

If the thought of spending your weeknights standing over a saucepan is enough to make you break out in a cold sweat, fear not! I’ve got the answer for you.

No, not a takeaway. I’m talking about a healthy, humble home cooked classic that’s as British as it gets.

This jacket potatoes with coronation chicken recipe is the perfect warming weeknight meal. There’s minimal prep time and the oven does most of the work, while you chill with your feet up and a well-earned glass of your favourite tipple in hand.

The humble yet glorious jacket potato

Who doesn’t love a jacket potato? There’s something very old-school British about a good old jacket potato. Simple, straight forward, convenient, no fuss… yet it delivers every time!

The jacket potato has been a British institution since the 19th century. In his book London Labour and the London Poor, journalist Henry Mayhew wrote about potato men – street sellers who would sell freshly baked potatoes on the streets of London.

The humble spud is still going strong today. A jacket potato is the perfect convenient meal to please and fill up the whole family – from weaning toddlers and ravenous teens to adult foodies with a taste for the finer things.

It’s quick and easy to whip together, delivers plenty of value for money and nutritious to boot. It’s also a zero-waste food – buy your potatoes fresh from your greengrocer or supermarket and there’ll be absolutely no plastic wrapping in sight.

Best of all, a jacket potato is the king of versatility. You can experiment with toppings until your heart’s content. You can even serve your spuds with several toppings, dishing out each family member’s favourite to create the perfect midweek meal for everybody.

How to make the perfect jacket potato

The perfect jacket potato is irresistibly crispy on the outside and lusciously soft on the inside. It’s not just about whacking it in the oven and hoping for the best – there’s a bit of an art to achieving this combination.

In terms of making the perfect jacket potato, I have a few key recommendations:

What is coronation chicken?

I also add sultanas. The little sweet explosion of a sultana, alongside the sweet tanginess of the mango chutney, just adds another dimension to coronation chicken. Feel free to leave the sultanas out if they’re not your cup of tea.

Aside from mango chutney, you could also use persimmon chutney or plum chutney. 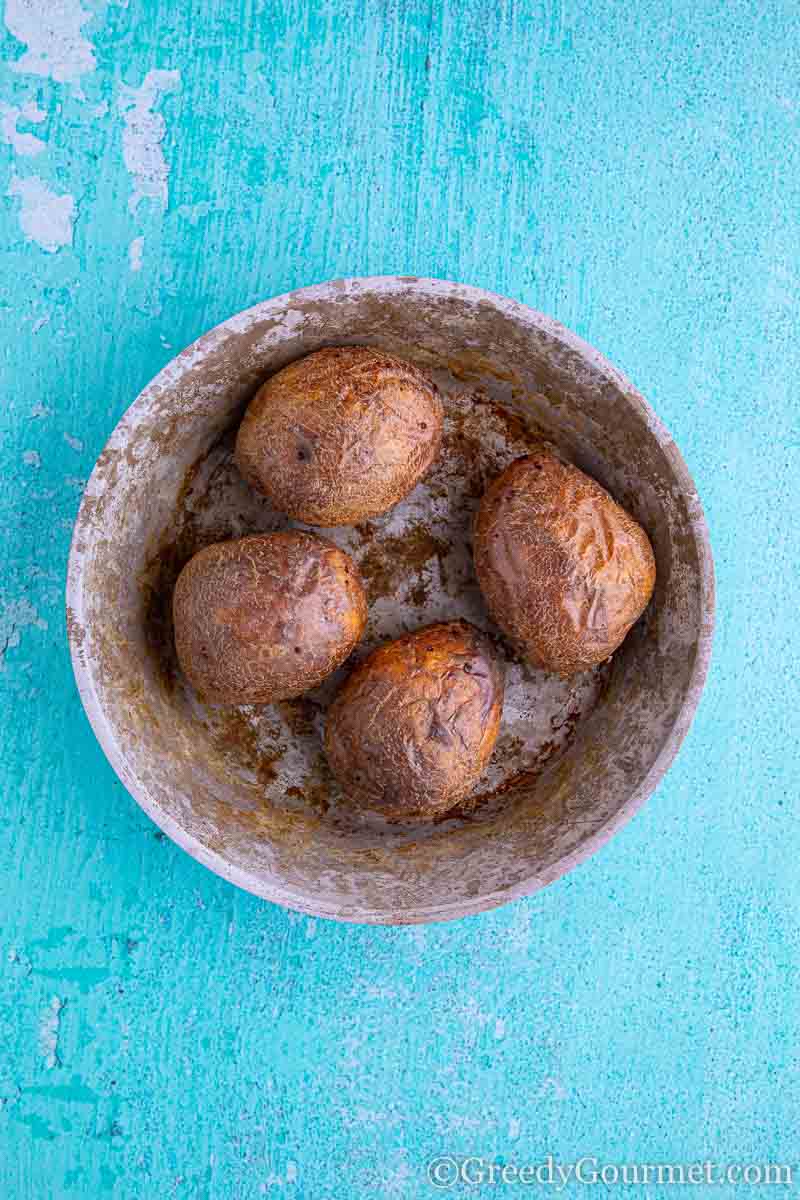 Constance Spry, an English teacher, food writer and royal florist, is credited alongside Rosemary Hume, a professional cook and food writer, as having invented coronation chicken.

The two foodies prepared dishes for the celebratory banquet for the coronation of Queen Elizabeth II. The cold chicken and curry cream sauce dish that was prepared quickly became hugely popular.

It was soon known, of course, as coronation chicken and the rest is history.

Are potatoes good for you? 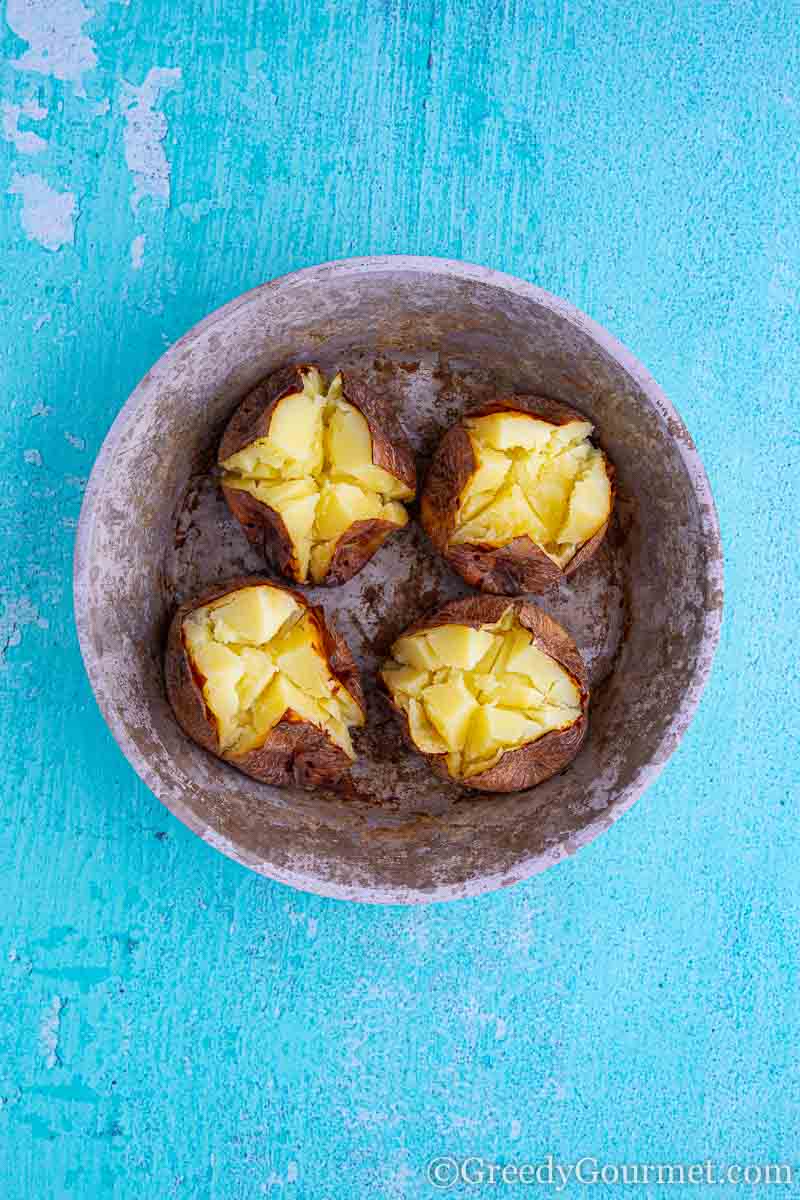 Not only are potatoes delicious, they’re also naturally fat-free. Potatoes are a source of essential nutrients as well.

Not a lot of people know that potatoes also make a contribution to vitamin C, vitamin B6 and folate intakes in diets of adults in the UK. Vitamin C is important as it helps to maintain a healthy immune system.

In addition potatoes are a natural source of fibre when eaten with their skins – so jacket potatoes are ideal.

What are the best potatoes to use for jacket potatoes? 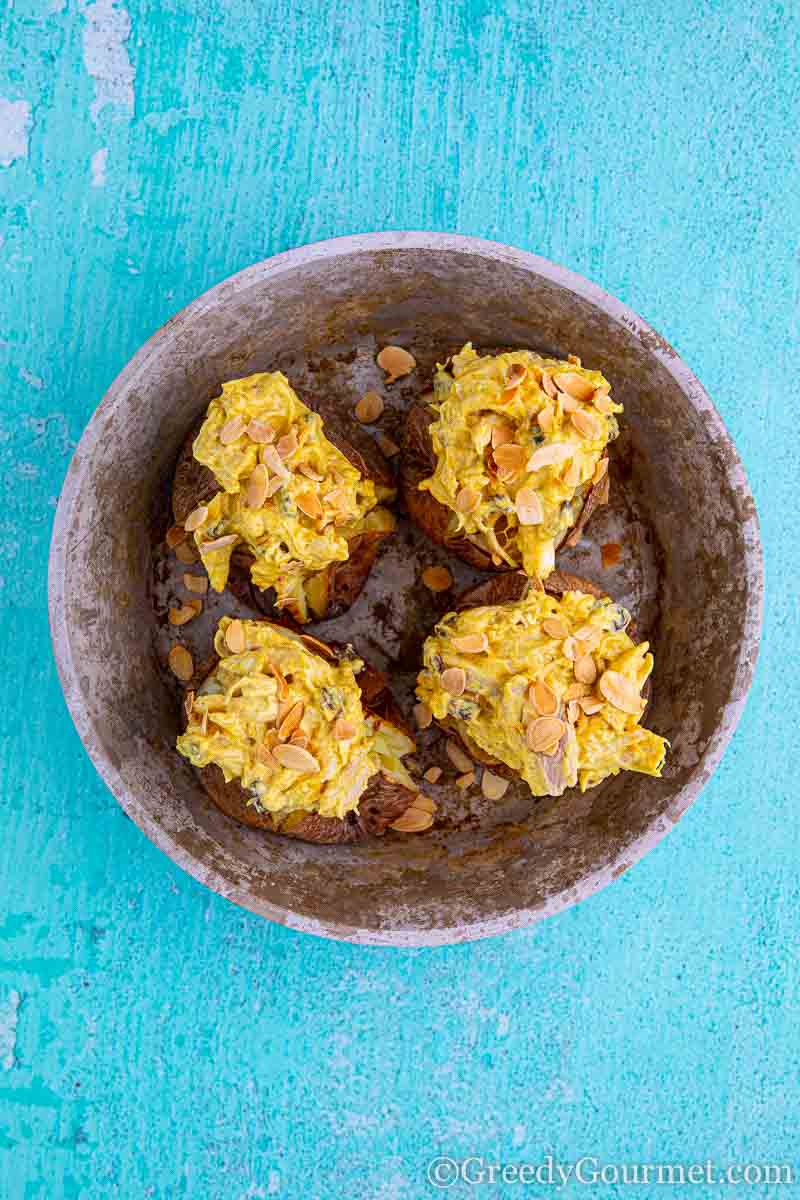 The best potatoes to use when cooking jacket potatoes are the big floury types.

The stand out spud has to be Maris Piper. Introduced into England in 1966 – only the second best thing to happen that year – the good old Maris Piper has gone on to become the most popular potato in the country and one of the most widely-eaten spuds in the world.

Other good potatoes for making jacket potatoes include Desiree and Russet.

If this coronation chicken with jacket potato recipe has got you in the mood to cook up some classic potato dishes, why not try some of these delicious recipes?

Coronation Chicken is the classic British recipe loved by all. You can have it as a potato filling, in a sandwich or salad. A perfect family meal!