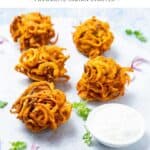 Potato bhajis are one of the most popular Indian street foods. These vegetarian starters are the perfect snack. Paired with a cucumber raita or a traditional pakora sauce, you are in for a treat.

Bhajis come in all sorts of variants, but most commonly you come across potato bhajis and the ever-popular onion bhaji. Basically, bhajis are an Indian starter, which consist of chopped up vegetables.

Once they are rolled up into spheres, they are placed in a batter and deep-fried. Altogether, they are delicious.

A potato bhaji is sometimes known as potato pakora in Indian states like Kerala or Pradesh. In general, they’re consumed prior to the main course alongside poppadoms.

They are the ultimate starter as well as the ultimate street food. Remember to serve them immediately – hot and fresh! And a word to the wise… make a large enough batch, because these babies tend to disappear quite quickly.

As mentioned above, potato bhajis are just one kind of bhaji. There are plenty of bhaji variants throughout the Indian subcontinent. That being said, bhajis have different names.

You might also know them as bhajji, bajji or bhajiya. In general, bhajis are one of the most common street snack foods as well as starters. One would generally nibble on onion or potato bhajis before starting your curry (main course) in restaurants.

They are most popular in these Indian states:

If you travel through any of these states, you will be able to source potato bhajis almost everywhere.

Ordinarily, bhajis consist of gram flour and any form of chopped-up vegetable. Here are some of the traditional versions of bhajis you may also find in the above-mentioned states:

Which one are you tempted by the most?

how to make Indian bhajis

For making this potato bhaji recipe, you will need the following items: 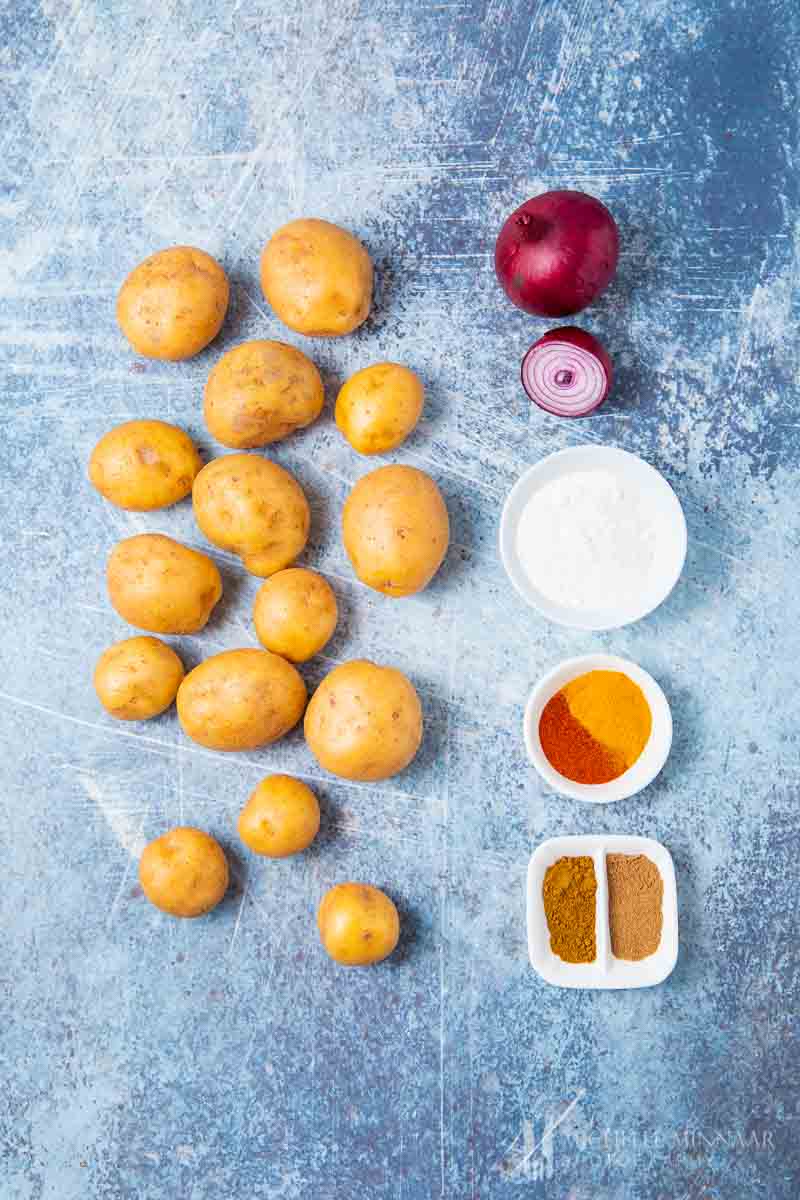 I’ve made a bhaji recipe before – bhindi bhaji – and it was delicious. These potato bhajis are no exception.

In short, you can use all sorts of potatoes. Both starchy and waxy types are alright for this little nibble. Therefore, my recommendation is to go for ordinary universal potatoes.

If you’ve got leftover potatoes, then definitely try to make these Indian favourites:

If you love deep-fried Indian starters, then you should also check these out:

One way in which you can enhance the flavours of potato bhajis is to add other vegetables. I recommend adding red onion slices, however white onion is also good.

The onions will also lend a softer consistency to the potato bhajis. You can also add celery or these celery substitutes for extra flavour.

In addition to the potatoes, you can also add spices and herbs to enhance the flavour of your bhajis. For instance, consider these:

How would you flavour your potato bhajis?

You can also turn these potato bhajis into onion bhajis. They are slightly sweeter and mushier in terms of consistency. Nevertheless, I recommend making three alternatives.

This way, every single bite is going to be different.

As for the frying process, the easiest way is to use a deep-fryer. If you haven’t got one at home, you can use a deep frying pan instead and fill it up with cooking oil. Not the healthiest thing, I think we could all agree, but delicious!

Handy tip: My recommendation is to fry the bhajis in unscented coconut oil. It’s not only suitable for frying, it’s also healthy. Coconut oil contains anti-inflammatory properties and is considered as one of the best substitutes to cooking oil.

If you prefer to refrain from frying your potato bhajis in general, then you can oven bake them. However, you run the risk of the bhajis losing their structure. In this case, it’s better to fry them as the process also binds all of the ingredients together.

If you oven bake them, they will simply fall apart. Especially if you opted for starchy potatoes. They will become mushy, and it’s all going to turn into a fragile mess.

You can make these bhajis vegan. Just make sure not to add an egg into the batter.

Same goes if you purchase pre-made batter. Make sure it is egg as well as dairy-free!

By the way, if you’re vegan and love potatoes check out these recipes:

When you are done with your potato bhajis, serve them immediately with a dipping sauce. Consider these:

Make these irresistible potato bhajis at home with a deep-fryer or with a frying pan. They are small battered spheres comprising potato, onion & spices.